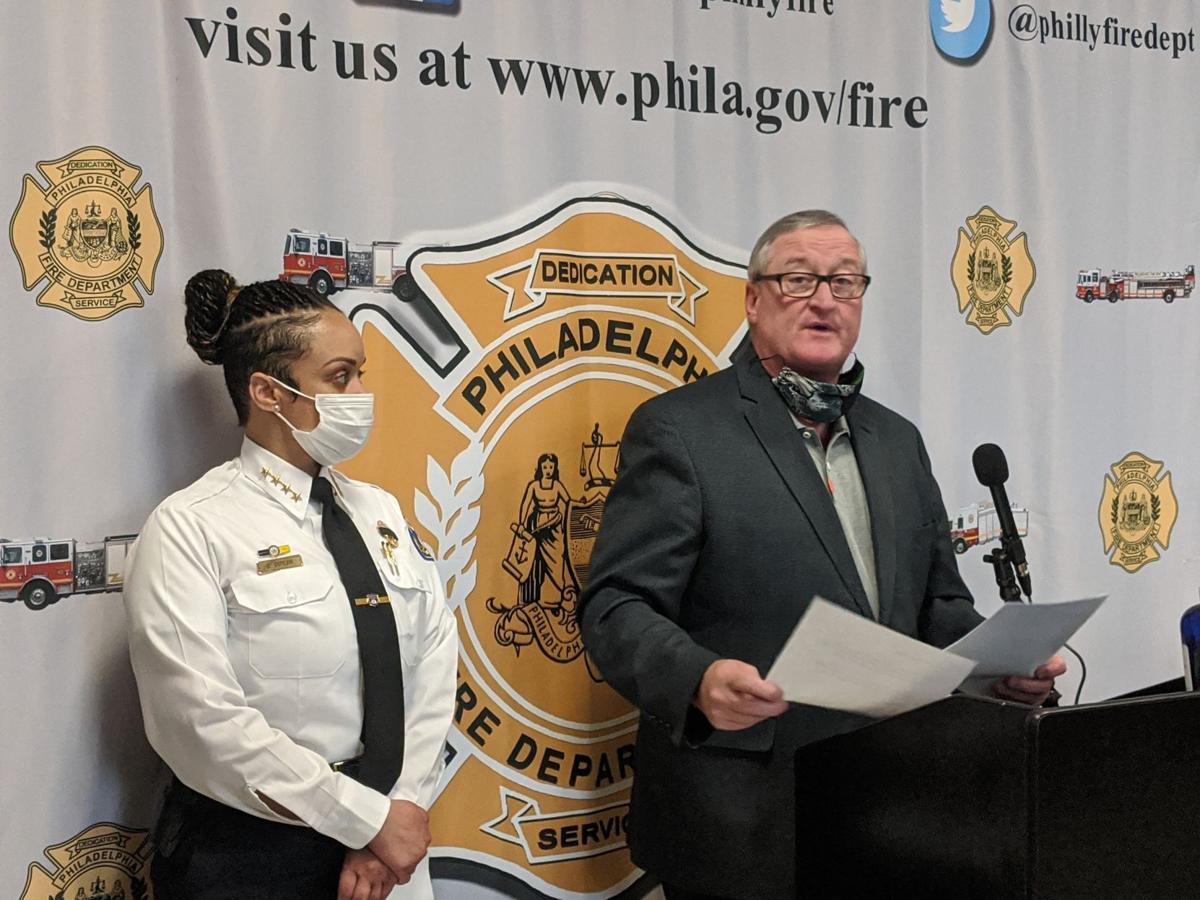 Mayor Jim Kenney says on Wednesday that the National Guard troops will remain in Philadelphia to supplement police, backtracking from earlier statements that he wanted them to leave. 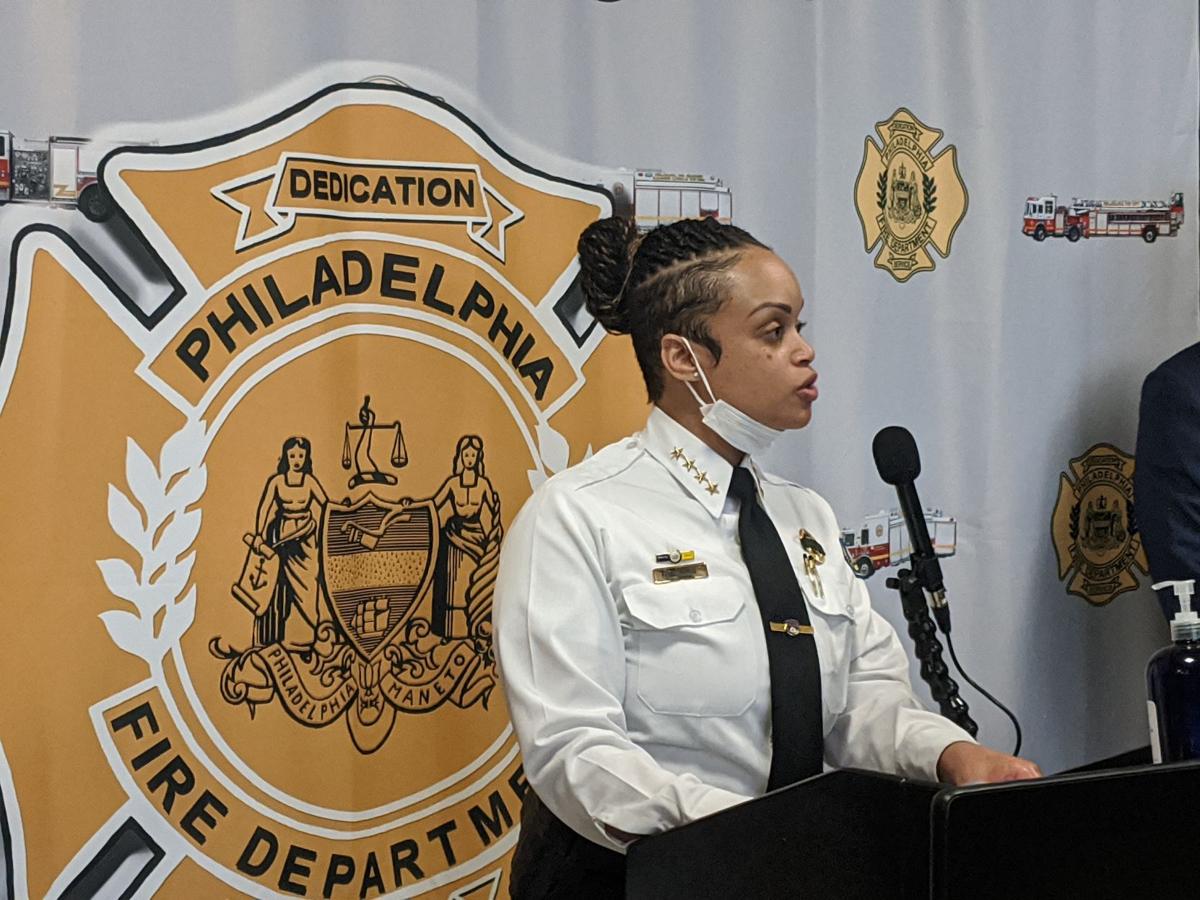 'We want to make sure that everything that we’re doing is tight and we can very well account for it after the fact when everything is said and done,' says Police Commissioner Danielle Outlaw about new polices she put in place for when offices employ use of force.

Mayor Jim Kenney says on Wednesday that the National Guard troops will remain in Philadelphia to supplement police, backtracking from earlier statements that he wanted them to leave.

'We want to make sure that everything that we’re doing is tight and we can very well account for it after the fact when everything is said and done,' says Police Commissioner Danielle Outlaw about new polices she put in place for when offices employ use of force.

Officers must now report when they use physical force and the type of force used via police radio after they use it, Outlaw said on Wednesday during a news conference alongside Mayor Jim Kenney.

Yet commanding officers must get the commissioner's authorization before they use "less lethal munitions," such as tear gas and rubber bullets.

The department lacked the experience using “this type of force to break up these crowds,” Outlaw said. The policy changes would allow the department to document the incidents better.

“We want to make sure that everything that we’re doing is tight and we can very well account for it after the fact when everything is said and done,” she said.

The commissioner and the department have come under heavy criticism following the gassing of demonstrators on Monday as they marched across the expressway near the 21st Street overpass. Outlaw has yet to identify the incident commander at the scene who decided to gas the protesters.

The commissioner and Kenney have defended the use of tear gas. Kenney said this week the gassing was a “last resort" after demonstrators surrounded a state trooper in his vehicle and were hurling rocks at police. Officers also issued were shot beanbags and pellets, and used pepper spray at protesters.

Outlaw acknowledged the new policy requiring her authorization for some tactics would create difficulties for officers responding to rapidly progressing developments.

Outlaw also called for officers to collect and preserve available evidence at the time use of force was employed, according a memo the commissioner sent out to the department that was reported by NBC10.

Philadelphia was preparing for a fifth day of protests on Wednesday over the police killing of George Floyd, an unarmed Black man, in Minneapolis by a white officer.

Police have seen a “marked increase” in attempts to break into ATMs throughout the city, including using explosives, Outlaw said.

Law enforcement has responded to 135 reports related to “explosive events” in the city, of which approximately 50 ATMs have been damaged or opened, since Saturday, Outlaw said. In most cases, the ATMs have no cash inside them because owners have removed it.

John Schmidt, acting special agent in charge of the Philadelphia division of the U.S. Bureau of Alcohol, Tobacco, Firearms and Explosives, said the federal agency was working with Philadelphia to investigate those attempting to destroy and loot ATMs.

“The situation is very fluid at this time,” he said at the news conference.

The vast majority of attempts to break into ATMs saw the use of M100 to M250 explosives. The use of the devices, which are homemade and considered quarter-sticks of dynamite, carries a weapons of mass destruction charge in the state, said Brendan O’Malley, chief deputy for state Attorney General.

Authorities did not reveal whether police have arrested anyone for the attempted looting of ATMs.

Since demonstrations began on Saturday, police have made 716 arrests. Police have issued the following code violations:

At least 25 officers have sustained injuries since the protests began, one of whom remains hospitalized.

Yet Outlaw said the looting and vandalism was beginning to slow down as the department receives more resources, law enforcement have an increased presence in certain areas, and the department’s so-called “looting teams” are placed around the city.

“I don’t want to claim victory before everything is over, but we are seeing that these looting teams have been effective,” Outlaw said.

National Guard troops will remain in Philadelphia to supplement police, Kenney said. He backtracked from earlier statements that he wanted them to leave Wednesday.

“Let me be clear: We are not there yet,” Kenney said. “We don’t know when they can leave.”

PHILADELPHIA — Officials in Philadelphia defended their use of tear gas in dispersing protesters who blocked a major highway at rush hour, cal…

Police struggle to keep up with crime, Philadelphians make up majority of arrests

Philadelphia police were struggling to adapt and respond to sophisticated demonstrators coordinating their efforts on Monday.

MINNEAPOLIS — Prosecutors on Wednesday expanded their case against the police who were at the scene of George Floyd's death, charging three of…

Authorities have arrested a man who they say tried to sell homemade dynamite tied to recent ATM explosions in Philadelphia.

From Philadelphia to Pittsburgh, marchers in Pennsylvania have taken to the streets in recent days to protest the death of George Floyd at the…

Cuts to the Philadelphia Police Department’s budget will lead to layoffs and snuff out investments in police accountability reforms, the city’…

Kenney, Outlaw admit they were wrong about 676 protest tear-gassing, officers involved to be fired

Outlaw grilled over police response to Floyd protests in Philly