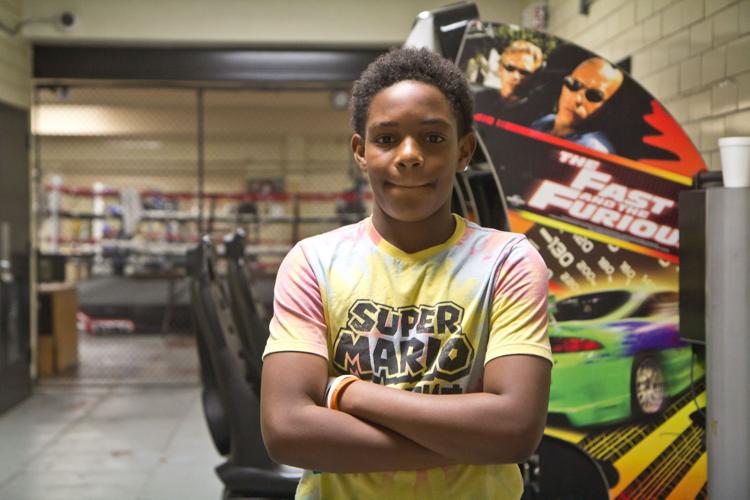 Cameron Larke, 11, is a participant in the Positive Choices program, which aims to teach kids conflict resolution and life skills, such as stock trading, and introduce them to careers like auto mechanics and video production.— Kimberly Paynter/WHYY 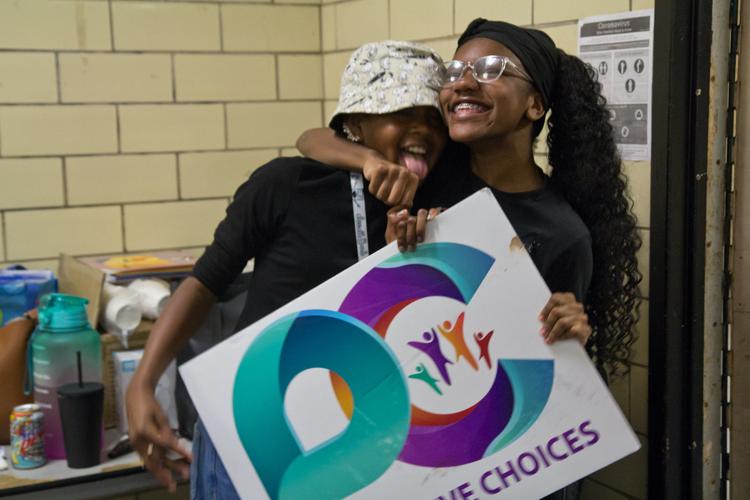 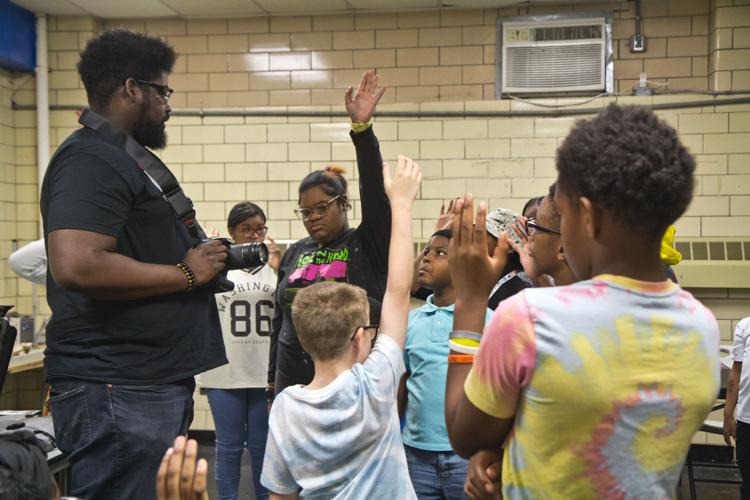 Kids in the Positive Choices program learn about video production from Jacques Princivil, owner of My Life My Film Media, after Saturday morning breakfast at Shepard Recreation Center in Philadelphia. 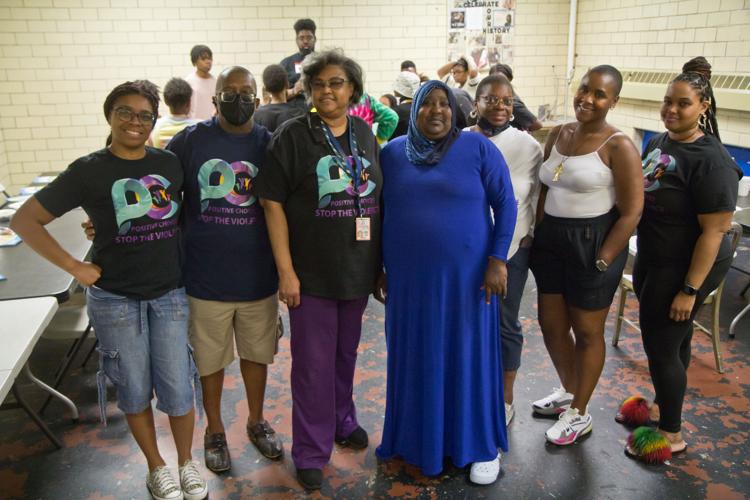 Cameron Larke, 11, is a participant in the Positive Choices program, which aims to teach kids conflict resolution and life skills, such as stock trading, and introduce them to careers like auto mechanics and video production.— Kimberly Paynter/WHYY

Kids in the Positive Choices program learn about video production from Jacques Princivil, owner of My Life My Film Media, after Saturday morning breakfast at Shepard Recreation Center in Philadelphia.

Geanna Williams-Davis beams at the entrance of a basement room in the Shepard Recreation in West Philly, greeting a line of still-waking adolescents headed in for breakfast. They take plates of baked goods, fruit and cereal before sitting down at an arrangement of folding tables that will serve as their classroom for the day.

The first Saturday in June marked the start of the summer session for Positive Choices, Williams-Davis’s program designed to teach children emotional management and life skills that could prevent them from getting involved in gun violence. Week one was a multimedia production workshop.

“Our kids, all they see is murder, drugs, violence,” she said. “We’re trying to show them something else.”

Positive Choices is one of 41 nonprofit-led efforts selected in September 2021 to receive support from the City of Philadelphia’s Targeted Community Investment Grant (TCIG) program, then in its fourth round. The city will soon announce the fifth round of the program, which will set aside more money for a new cohort of recipients.

City leaders have touted this grant program as a core feature of their gun violence prevention strategy. But nonprofit leaders who were selected for the last round of TCIG awards say the program has been plagued with difficulties and delays. Multiple groups said they had to cover program expenses out-of-pocket for longer than anticipated, fell behind on contractor payments and youth stipends, or had to eat the cost of certain events or supplies because their requests for payment were denied. Groups had the option of spending upfront and getting reimbursed or having the city’s fiscal sponsor pay for program expenses directly.

“It’s a bit much, if you’re awarded a grant in September and it’s almost September again,” said Williams-Davis. As of June 13, she said she hasn’t yet been paid any of the $18,000 promised to her nonprofit through TCIG. “They earmarked this money to help these kids with this anti-violence promotion. It’s earmarked for them, so give it to me.”

The latest data from the Urban Affairs Coalition (UAC), which is the fiscal sponsor responsible for doling out the city grant money, shows eight of the 41 awardees had received none of their TCIG funding as of June 13. An additional three had received about half of what they were promised, and only 12 organizations had been paid more than 90% of their allocation.

The city has attributed the delay to a change-over in UAC’s accounting system and vowed to make improvements to the payment process. They originally said organizations would be paid out in the spring, but many nonprofits were still fighting for their funds at that point.

The city set a payout date to mid-April and then pushed it to mid-May, citing understaffing and technical delays related to the funding distribution process.

“I won’t make excuses for the challenges that our grantees have faced, that has never been our intention in how we wanted their experience to be,” said Erica Atwood, director of the city’s Office of Policy and Strategic Initiatives for Criminal Justice and Public Safety, in February.

As of May 27, the city said it is “in the process of fully closing out cohort 4,” or the fourth round of grantees, but would not provide a full list of which organizations have been paid out and to what extent. They said in April that they would be reviewing the payout system and “looking into other payment options, such as prepaid debit cards, depending on the grant amount.”

Meanwhile, some nonprofit leaders say they were spending an unreasonable amount of time each week filing forms and sending emails asking for the funds. They said the delays made them reconsider whether to apply for the fifth round of TCIG.

“With the assumption that the 5th round of TCIG grants will remain the same or even similar to what we experienced in the 4th Cohort, we won’t be applying again,” said Kwaku Owusu, finance director and treasurer for a youth nonprofit called Collective Climb, via email. “[We] would much rather use the many hours that would have been dedicated to administrative and reporting work to find other more flexible funding sources.”

The delay raises the question of whether the TCIG money is actually making a dent in Philadelphia’s rising shooting tally — there have been just over 1,000 shootings this year.

Advocates and officials following gun violence spending have questioned whether the city is adequately evaluating the impact of dollars spent on anti-violence programs.

City Controller Rebecca Rhynhart brought up the point on a recent segment of WURD Radio, referring to the $155 million set aside for violence prevention in the 2022 budget.

“What we haven’t seen is real accountability around it,” she said. “The city needs to be evaluating the outcome of the dollars, and then making decisions around whether something is working or not.”

The city says it’s “compiling reports” on this for TCIG, but didn’t give an estimate for when they’d be released.

Meanwhile, they’re continuing to funnel dollars into the separate but related Anti-Violence Community Expansion Grant program, which offers up to $1million in funding to violence prevention programs that run for a year. The 2022 budget funneled $13.5 million into this model, and the proposed 2023 budget currently includes an additional $12 million for community-based organizations focused on reducing violence through “trauma-informed healing and restorative practices.”

Scott Charles, a trauma outreach manager at Temple University Hospital and gun violence prevention advocate, said the shift toward giving dollars to mom-and-pop nonprofits is a good one, but only if it’s rolled out with precision and support.

“Those organizations aren’t prepared for what’s being asked of them in many cases, and not a lot of technical assistance has been done,” he said. “If we don’t help them, they’re going to fail. And then the funders are going to say, ‘see, we tried and it didn’t work.”

Those familiar with the grant distribution process say there’s likely to be a lot of variation in the nonprofit experience with a program like this, depending on the size of the organization and how familiar they are with reimbursement paperwork.

During the course of the fourth round TCIG distribution process, WHYY heard from more than a dozen selected organizations, but most didn’t want to speak on the record about their experience. Some said they found the payment process reasonable, while others said it was tedious and time-consuming.

Some said they were denied reimbursement for simple charges such as pizza parties because they didn’t have an adequate paper trail or because the UAC wouldn’t accept their receipts. Others couldn’t get paid back for hiring a speaker for a presentation if the name of the guest changed from what was in their original grant budget and application.

Nonprofit leaders suggested the city give organizations the funding up front and then ask for reports back at the end, so that they’re able to serve young people with urgent needs in a timely manner.

“I understand as this is taxpayer money there has to be some sort of accountability process, but certified 501©3 and other nonprofit organizations shouldn’t have to report this intensely how the funds are spent,” said Owusu.

When asked about these issues, UAC said they “are only permitted to distribute funds to grantees that provide accurate paperwork and documentation for payment per the rules of the City.”

Many nonprofits that received partial repayment or delayed repayment said the grants did ultimately enable them to launch programs that they wouldn’t have been able to put on otherwise, and that it was still worth participating in spite of the onerous paperwork.

Williams-Davis decided to apply for the fifth round of TCIG money, and hopes to be selected.

She said she’s expecting the same difficulties in the next round. But this time, she’s prepared to spend her own money, rely on help from donors and partner organizations, and ask her presenters and other contractors for flexibility in the payment timeline.

“It’s going to be tough, I’m going to tell you that,” she said. “We all chip in also to make things happen for the kids. So it’s just, you know, it’s a team effort.”

The rest of Williams-Davis’s summer program will include a gun safety course for kids who might encounter firearms at home or in public, and a Boy Scout-led merit badge program to cultivate practical skills and volunteer work.