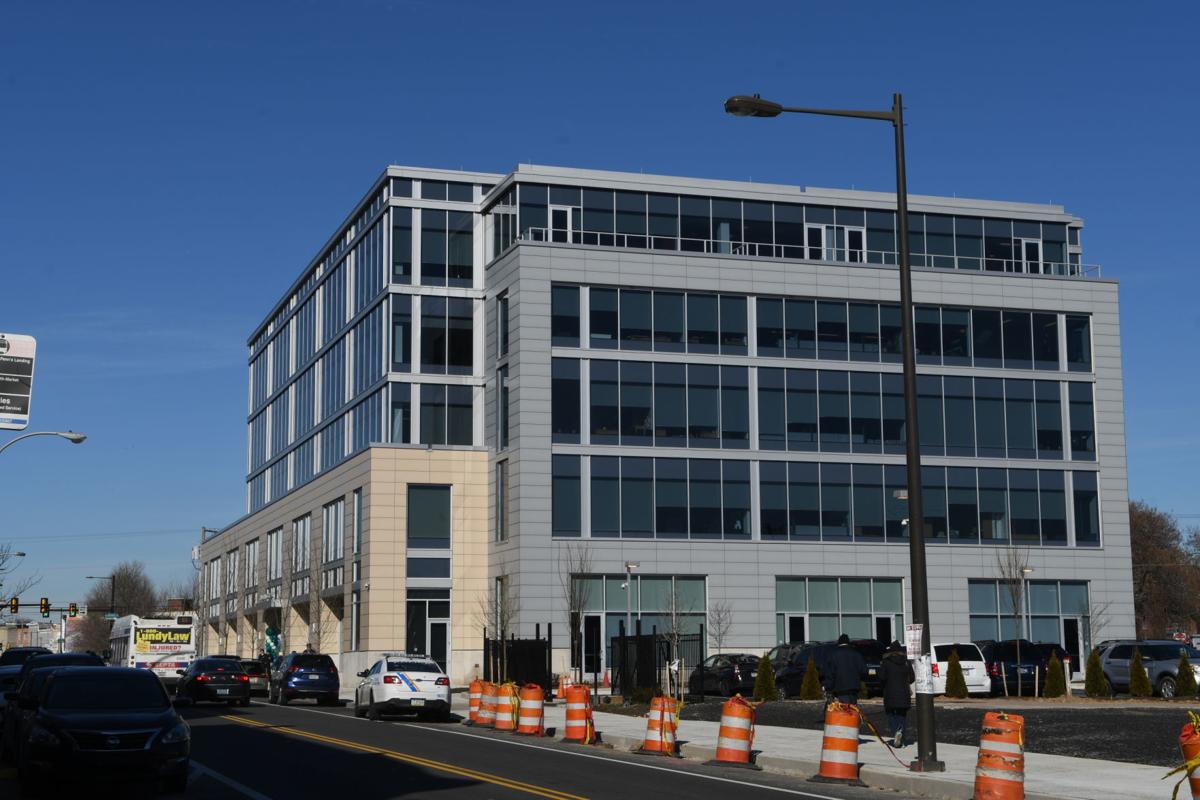 The Philadelphia Housing Authority’s new headquarters will serve as an “economic engine” and anchor for two rapidly changing neighborhoods in North Philadelphia and push back against gentrification, officials say.

The PHA’s five-story, $45 million building at 2013 Ridge Ave. in the Sharswood and Blumberg neighborhoods will consolidate numerous PHA offices that were scattered throughout the city, including admissions and the Housing Choice Voucher Program, so as to streamline services.

Speaking to a room full of officials and others in the new building Tuesday for its grand opening, PHA President and CEO Kelvin Jeremiah said the agency’s ongoing redevelopment of the area has pumped more than $150 million into the two neighborhoods.

“Change isn’t coming to Sharswood, Blumberg; change is here,” Jeremiah said, adding that the new headquarters “will serve as an anchor institution and a catalyst to social and community economic development.”

Mayor Jim Kenney said the grand opening marked “a major step forward in the transformation” of the Sharswood neighborhood.

The 136,000-square-foot modern building features a predominantly glass exterior. It was designed to meet LEED Certification energy-efficiency standards. It will house a cafe and a bank. Outside, the property has 50 parking spaces, an Indego bicycle-share dock, and on-street parking spaces along Ridge Avenue.

The building, which stands on previously vacant land, officially opened for business on Jan. 7 in an area that was economically starved and depressed for decades since race riots erupted in the 1960s. The area, near Girard College, has seen a flurry of development in recent years, including new rowhomes and commercial businesses.

Kenney said the PHA’s presence there — and the larger transformation plan for the area — will help keep longtime residents in their homes as the area undergoes private investments and begins to gentrify.

“Private investment is good, but it’s not good if it pushes people out of their homes, pushes people away from the neighborhoods they grew up in and live in,” the mayor said. “PHA’s existence here will be the anchor to slow that roll, makes sure it’s done in a proper and equitable way.”

City Council President Darrell Clarke, who represents the 5th District where the neighborhoods are located, said gentrification is real.

“That’s why it’s so important to show the level of commitment, not only by building new houses, but by building the headquarters [of PHA],” Clarke said.

PHA’s headquarters moved from the 2300 block of Market Street in Center City, which cost $1.5 million a year in rent and failed to meet the agency’s needs, Jeremiah said.

In addition, ongoing construction adjacent to PHA’s headquarters will bring a Save-A-Lot grocery store, a restaurant, an urgent care facility and a hardware store to the area in the coming months.

Jeremiah added that upwards of 40 percent of those hired for the headquarters project were from the agency’s Section 3 Job Bank of PHA and low-income residents who meet other qualifications.

“PHA continues to be an economic engine in this community and in the city,” Jeremiah said.

The project is part of PHA’s $500 million Sharswood/Blumberg Transformation Plan, which began in 2012 and focuses on a multi-block area bounded by 19th and 27th streets, Cecil B. Moore Avenue, and Poplar Street to College Avenue on the south.

In December, PHA broke ground on a $35 million project to construct 83 affordable housing rental units at the Norman Blumberg apartment complex, also tied to the transformation plan. These will add to the 57 units already constructed during the first phase of the project that will eventually bring more than 1,200 units to the neighborhoods, more than half of which will be dedicated to affordable housing.

Back at PHA’s headquarters, dozens of residents sat quietly in the building’s new waiting room to speak with agency representatives after the grand opening ceremony.

Among them was Erica Johnson of Queen Village, who said she was less focused on the building’s design than the lack of quick service.

Sitting nearby, resident Jasmine Gittens was more positive about the new headquarters she was visiting for the first time, saying the building’s design provided a level of respect to those seeking services.

“I like the aura,” Gittens said. “Even the people they have working, they’re nice people. It’s welcoming, like you would want to come back to get services here.”

Yvonne Bundy and her goddaughter, Aesha Dickens, remember living in the former Norman Blumberg Apartments when they still stood in North Phila…

The Philadelphia Housing Authority has begun the third phase of its redevelopment of the Norris Homes in North Central Philadelphia, next to T…

The Philadelphia Housing Authority (PHA) on Thursday morning broke ground at the site of its new headquarters in North Philadelphia.

Former PHA headquarters to be converted into apartments

The Philadelphia Housing Authority has agreed to convert the site of the agency’s former headquarters at 2012 Chestnut St. into an apartment b…

Society Hill residents came out in force Tuesday to oppose plans for a 31-story apartment tower at the edge of their neighborhood.

When U.S. Housing and Urban Development Secretary Ben Carson visited Philadelphia on Thursday, he announced the agency has awarded $74 million…

Kenneth Miller shouted at the elevators on the 11th floor of the newly renovated Sharswood Tower in North Philadelphia.