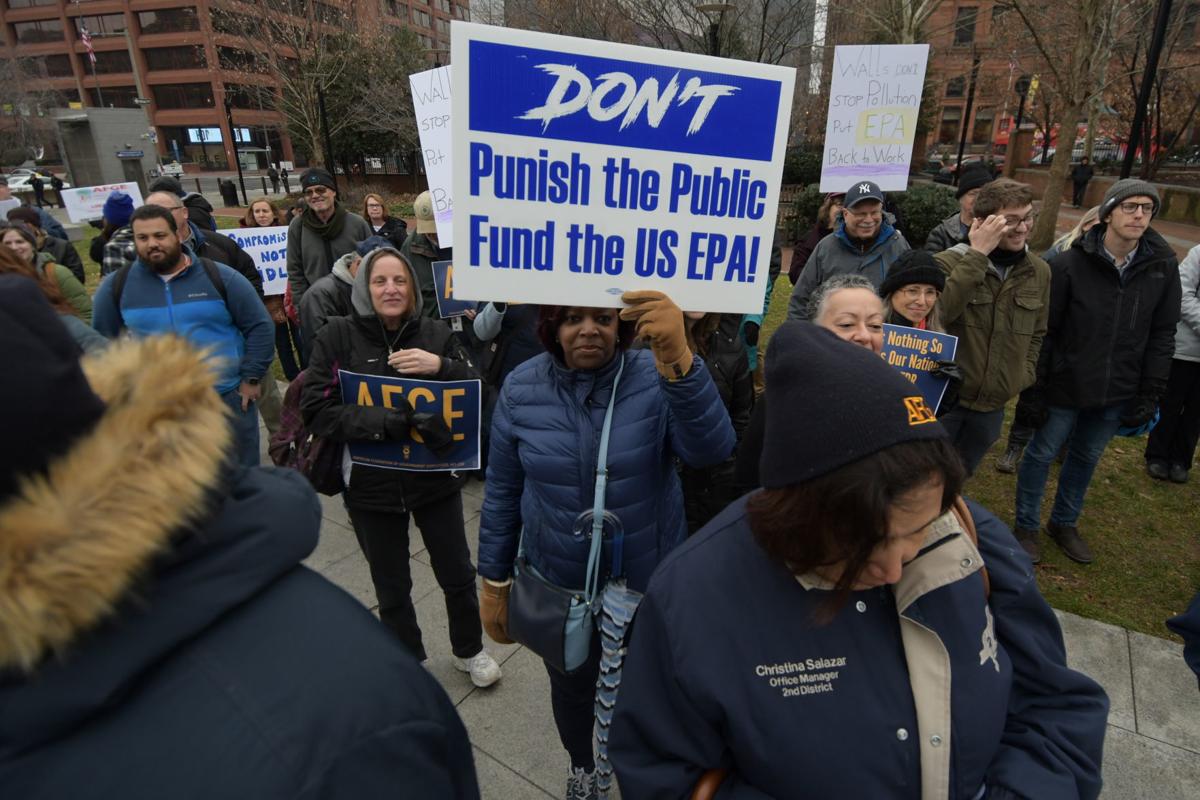 Federal workers called for an end of the shutdown last week at a rally in Philadelphia, as many government reports on the economy and other topics go unfulfilled. — PHILADELPHIA TRIBUNE PHOTO/CHIEF PHOTOGRAPHER ABDUL R. SULAYMAN 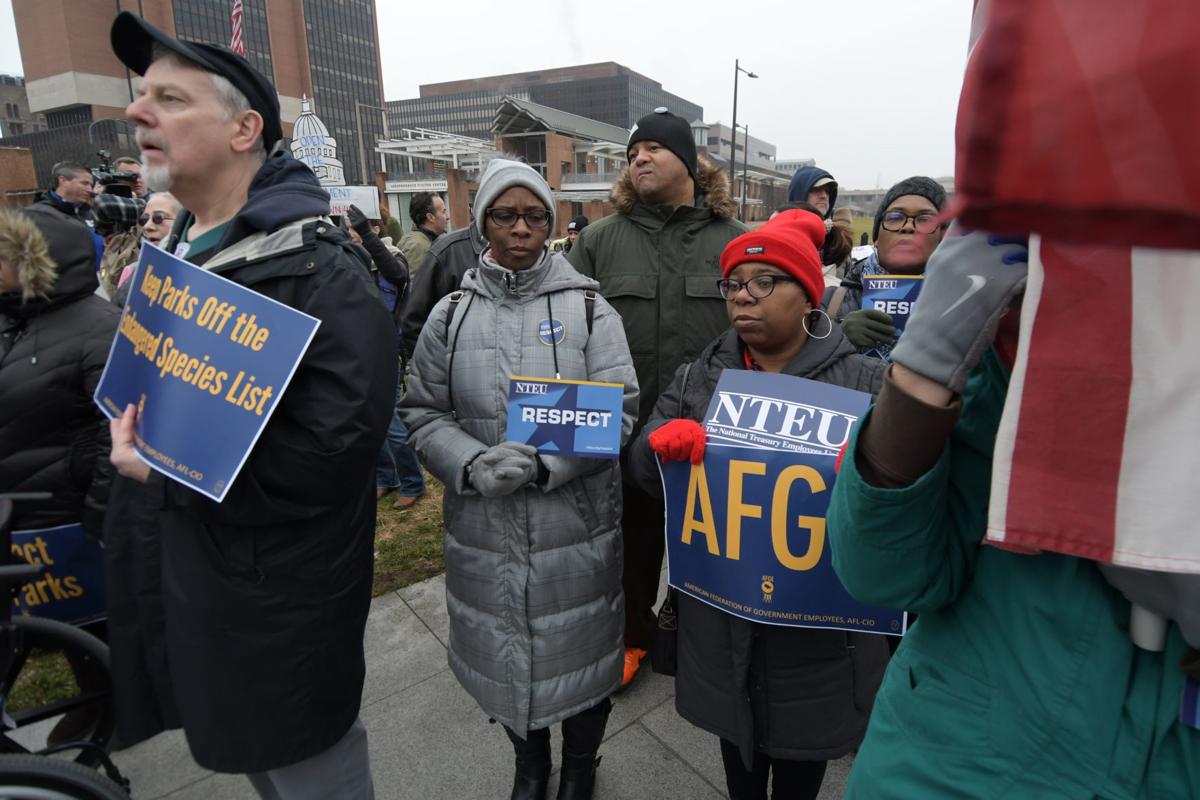 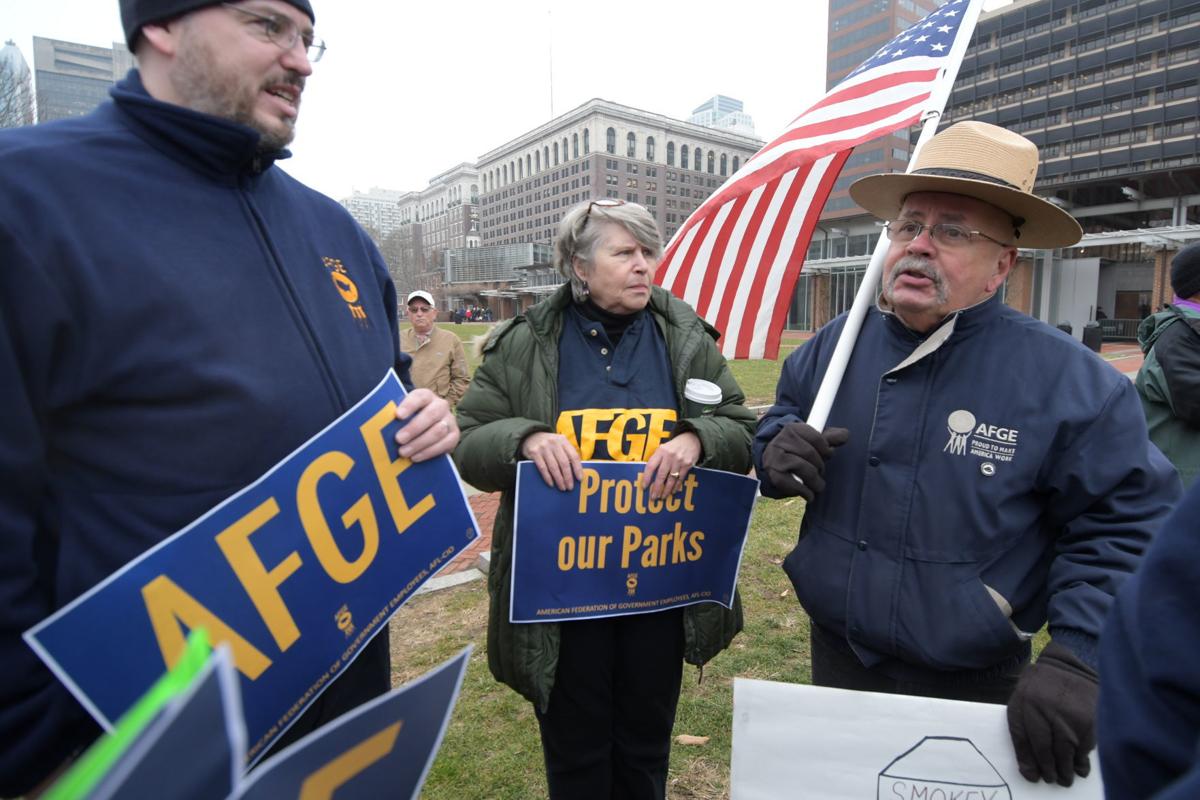 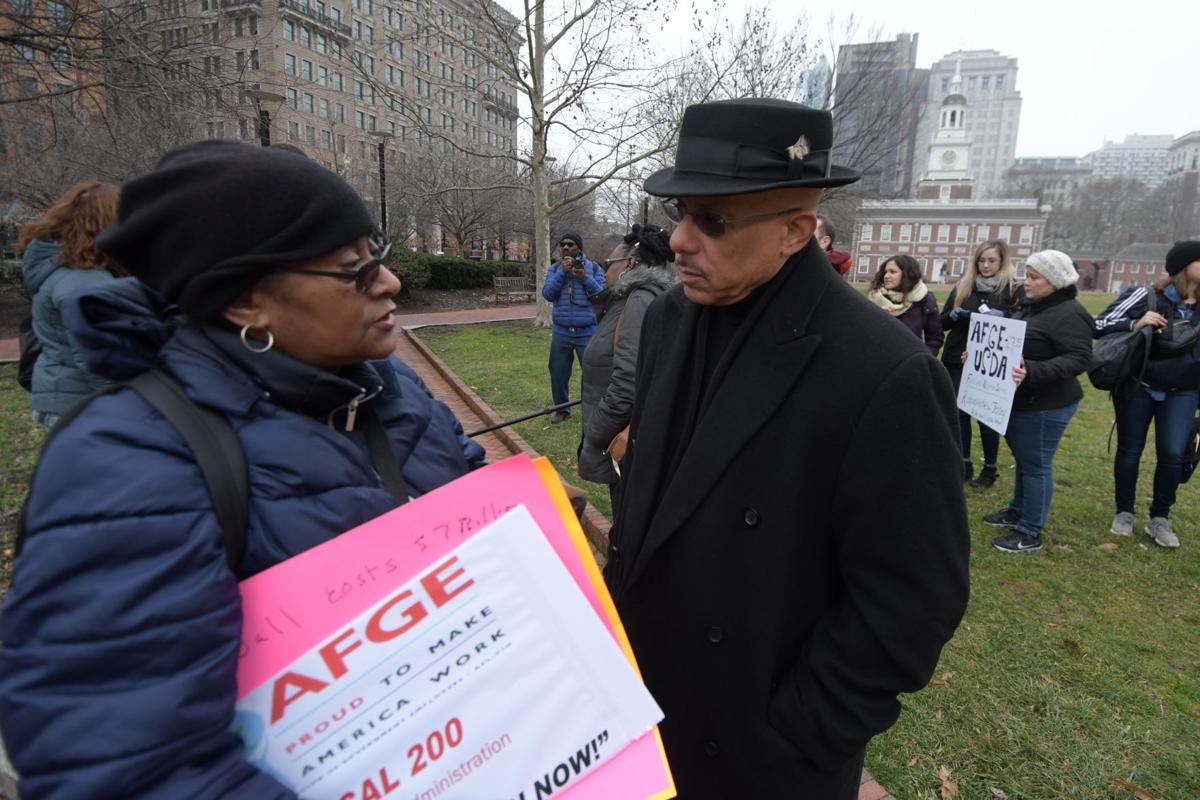 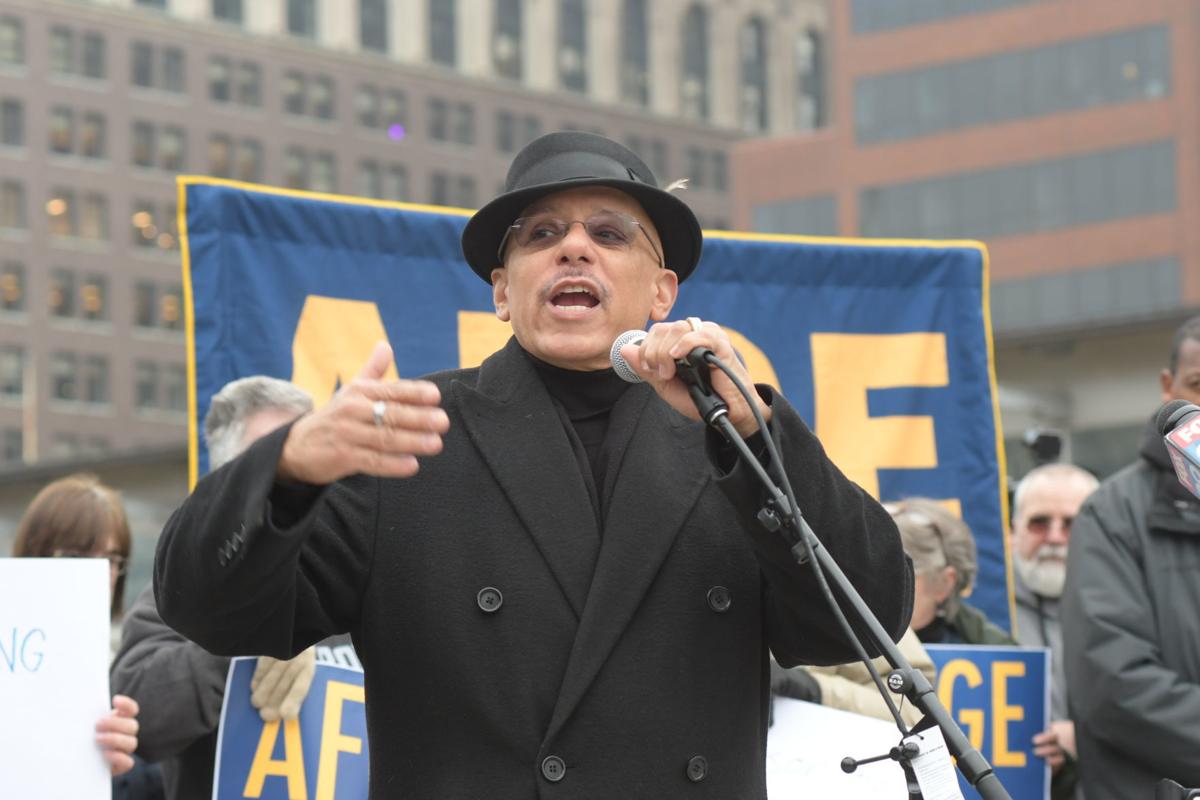 State Sen. Vincent Hughes speaks at a rally where federal workers called for an end to the partial government shutdown 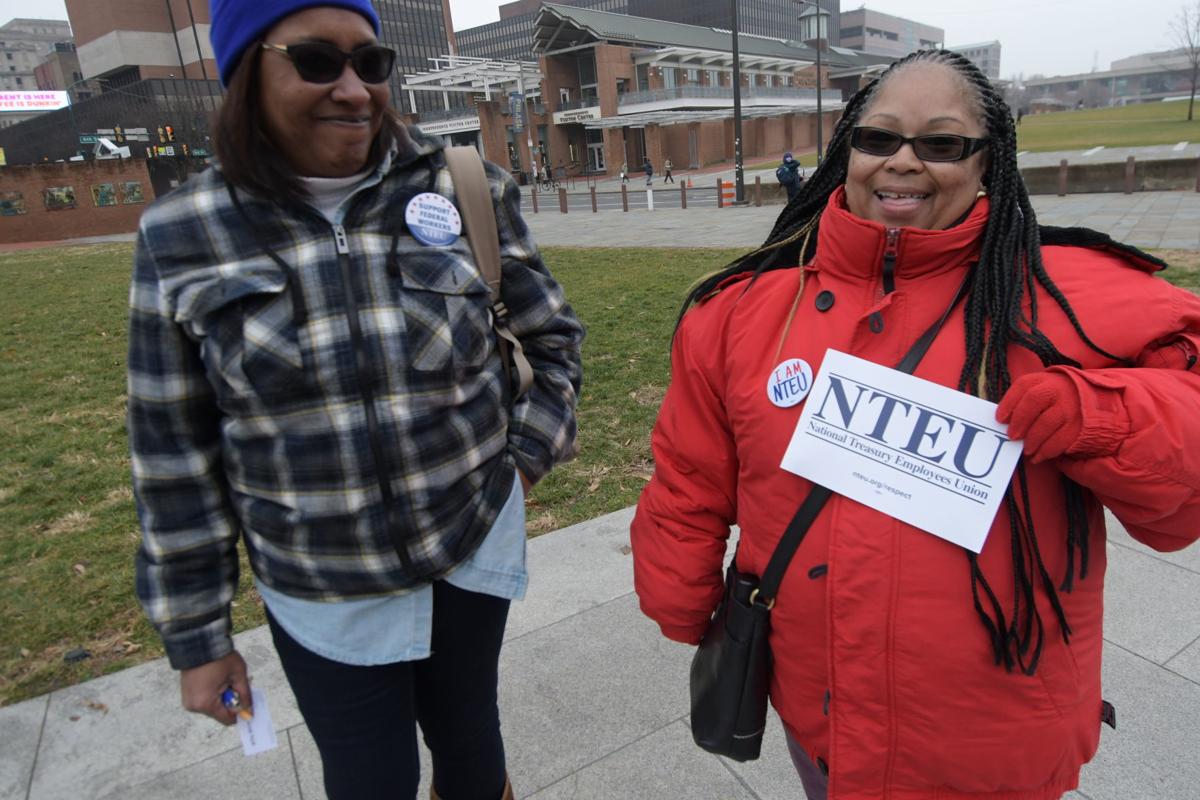 Veronica Sorrell, right, and Karen Ricks work for the Internal Revenue Service, but are furloughed during the government shutdown and don't know when they'll receive their next paycheck. The two say they have filed for unemployment. — PHILADELPHIA TRIBUNE PHOTO/CHIEF PHOTOGRAPHER ABDUL R. SULAYMAN

Federal workers called for an end of the shutdown last week at a rally in Philadelphia, as many government reports on the economy and other topics go unfulfilled. — PHILADELPHIA TRIBUNE PHOTO/CHIEF PHOTOGRAPHER ABDUL R. SULAYMAN

State Sen. Vincent Hughes speaks at a rally where federal workers called for an end to the partial government shutdown

Veronica Sorrell, right, and Karen Ricks work for the Internal Revenue Service, but are furloughed during the government shutdown and don't know when they'll receive their next paycheck. The two say they have filed for unemployment. — PHILADELPHIA TRIBUNE PHOTO/CHIEF PHOTOGRAPHER ABDUL R. SULAYMAN

For the first time in decades, Karen Ricks and Veronica Sorrell said they had to file for unemployment.

Ironically, both have jobs.

But Ricks and Sorrell, who each described themselves as the breadwinner for their family, won’t receive paychecks while the partial federal government shutdown drags on. The shutdown entered its 18th day on Tuesday.

“Our standard of living is based on our paycheck, not on an unemployment check,” Ricks said as she stood beside Sorrell. “Whatever I get from unemployment, hopefully that will feed us, but I still don’t know if it’s going to pay my other bills."

Sorrell added: “I’m trying to figure out how to pay my mortgage, how to pay my car note, how to feed my family. It’s getting kind of tough. We got bills to pay. … We don’t have the funds but we’re going to make do.”

The women joined more than 100 of their fellow federal workers and congressional leaders for a rally in Independence National Historical Park to call on Congress and President Donald Trump to end the shutdown and reopen the federal government.

The American Federation of Government Employees Local 2058, which represents employees working at Independence Hall, the Liberty Bell and other agencies in Philadelphia, organized the rally.

Park Ranger Adam Duncan, president of AFGE Local 2058, said that if the the Founding Fathers could find common ground and write the Declaration of Independence and Constitution, then modern-day elected representatives can do the same.

“That’s what we want Washington, D.C., to do, our officials: Get it done,” he said. “Get these buildings back open. End the shutdown once and for all.”

The partial shutdown began on Dec. 22 over a disagreement between Trump and congressional leaders over Trump’s demand for $5.7 billion to build a wall along the U.S. border with Mexico.

More than 800,000 federal workers are furloughed or working without pay. The shutdown affects the departments of Agriculture, Interior, Treasury, and Housing and Urban Development, among others.

Phil Glover, national vice president of AFGE District 3 who helped organize the event, said the majority of the federal workers caught up in the shutdown live outside the Beltway.

“A lot of people think the federal government is just D.C.,” Glover said. “Eighty-five percent of the federal workforce works outside of Washington.”

During the shutdown, Independence National Historical Park, including the Liberty Bell Center, remains closed, but the Independence Visitor Center is open during normal hours.

Trump said in a tweet that he will speak during a nationally televised address about what he described as a humanitarian and national security crisis on the Mexican border at 9 p.m. Tuesday.

“I campaigned on Border Security, which you cannot have without a strong and powerful Wall,” Trump said in a statement Tuesday. “Our Southern Border has long been an ‘Open Wound,’ where drugs, criminals (including human traffickers) and illegals would pour into our Country."

The current 18-day shutdown is tied for the second longest in U.S. history and marks the third shutdown of the Trump presidency. The longest government shutdown lasted 21 days in 1995.

“The tragedy of this is: It is completely unnecessary," he said. "This Trump shutdown is a phony shutdown.”

Their words drew applause and chants of “Enough is enough!” from the protesters.

Lynn Cox, president of AFGE Local 2032, which represents those working for the Department of Housing and Urban Development, said she’s working with employees to apply for unemployment and loans during the shutdown.

“I told them, 'Do not be ashamed to take a hardship from your 401(k),'” Cox said. “Do what you can do to survive. Right now, people live paycheck to paycheck."

As for Ricks and Sorrell, the IRS employees, both were looking forward to the end of the shutdown.

“I’m hoping that the Senate will go head and vote,” Ricks said. “I think if they just forget about it [funding for Trump’s wall], go ahead and override [the president’s] veto and work out that wall stuff later, that’s what’s best for the country."

US governors group calls for end to federal shutdown

Leaders of the nonpartisan National Governors Association are calling on President Donald Trump and Congress to end the partial government shutdown.

The reality on the border: How much will a wall really help?

WASHINGTON — President Donald Trump says there is a security crisis at the U.S.-Mexico border that can be addressed only by spending $5.7 bill…

How the shutdown could affect the January jobs report

Regardless of how well the American economy is doing, the January jobs report might be ugly.

Payday without pay hits federal workers as shutdown drags on

OGDEN, Utah — Payday will come Friday without any checks for about 800,000 federal employees affected by the government shutdown, forcing work…

On the 20th day of the government shutdown, U.S. Sen. Bob Casey rebuked President Donald Trump over his demand for $5.7 billion to build a ste…

WASHINGTON — With the deceptive use of a video, President Donald Trump on Thursday heartily thanked his White House predecessor for supporting…

PROVIDENCE, R.I. — When her paychecks dried up because of the partial government shutdown, Cheryl Inzunza Blum sought out a side job that has …