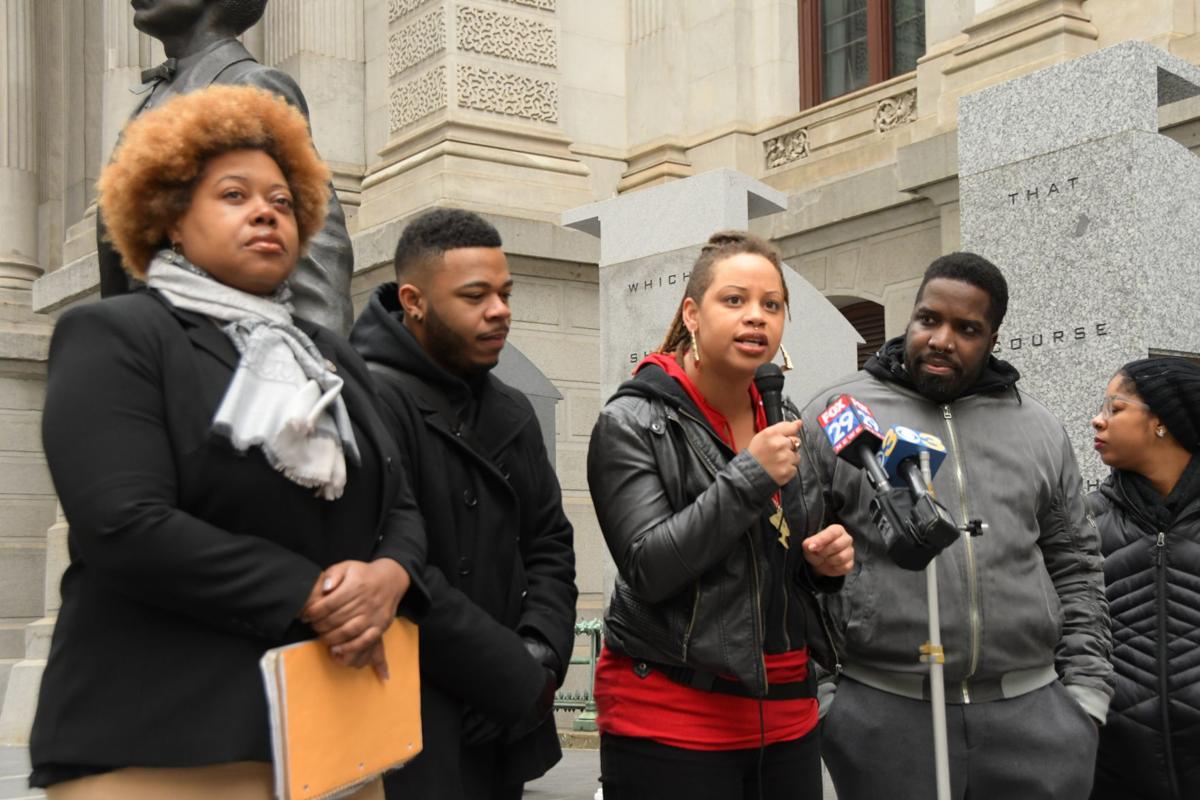 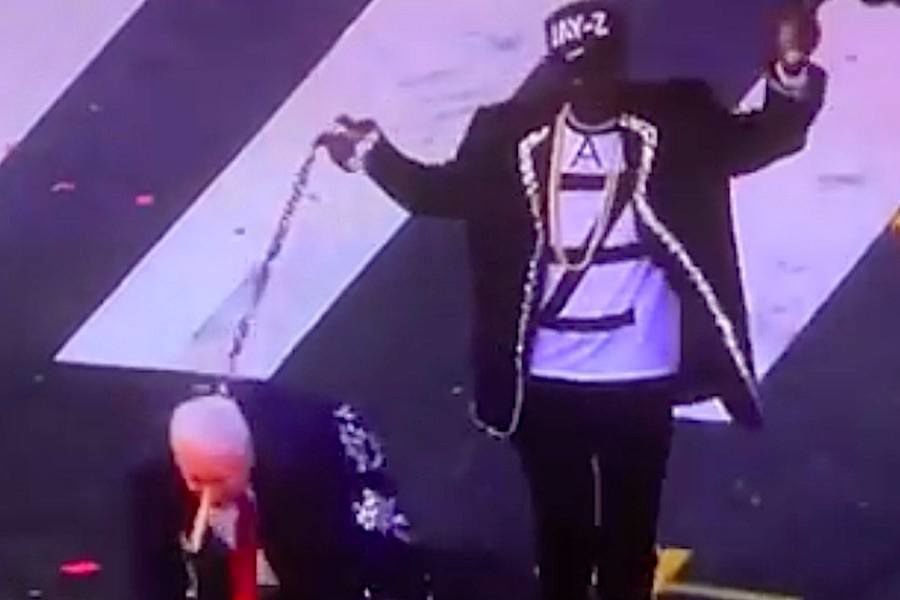 A man portraying rapper “Jay-Z” uses a leash to lead an unnamed man portraying Mayor Jim Kenney, crawling on all fours and wearing a Pinocchio-sized nose during the Mummers Parade a year ago. — PHL17 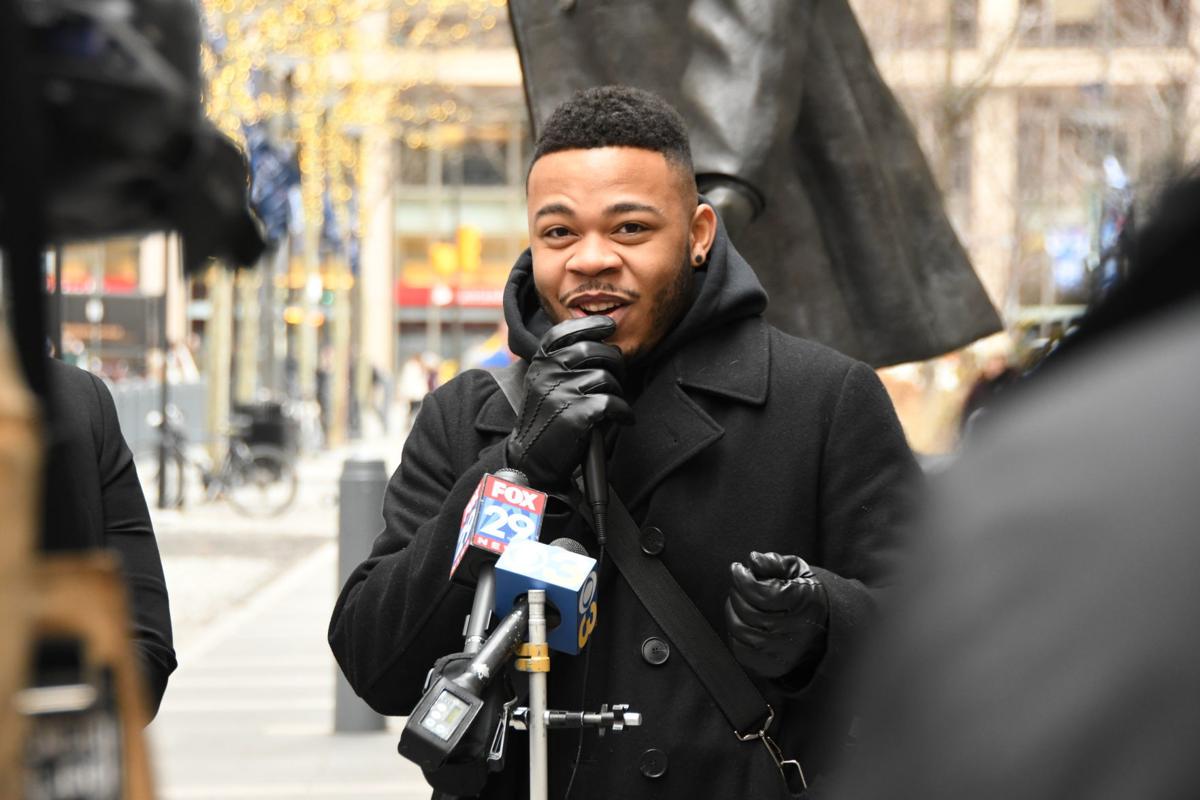 "He was definitely tokenized and objectified walking in a predominantly white parade," says Mikhel Harrison referring to the Black man who played Jay-Z in the skit during the Mummers Parade. —PHILADELPHIA TRIBUNE PHOTO/CHIEF PHOTOGRAPHER ABDUL SULAYMAN

A man portraying rapper “Jay-Z” uses a leash to lead an unnamed man portraying Mayor Jim Kenney, crawling on all fours and wearing a Pinocchio-sized nose during the Mummers Parade a year ago. — PHL17

"He was definitely tokenized and objectified walking in a predominantly white parade," says Mikhel Harrison referring to the Black man who played Jay-Z in the skit during the Mummers Parade. —PHILADELPHIA TRIBUNE PHOTO/CHIEF PHOTOGRAPHER ABDUL SULAYMAN

“He was definitely tokenized and objectified walking in a predominantly white parade,” Harrison said referring to the Black man who played Jay-Z.

The parade performance put on by the Finnegan New Year’s Brigade, which was pre-approved by the city, initially sparked outrage when people — including City Council President Darrell Clarke — mistakenly accused the man representing Jay-Z of wearing blackface.

The city debunked the blackface accusation and confirmed the man, Darrel Young, was Black. But the controversy has persisted.

Harrison, a 24-year-old Black man who identifies as queer, condemned the skit as racist and humiliating to people of color.

“You know as a person of color when you feel welcome in a place and when you’re not. And it’s not the most welcoming space right now,” Harrison said referring to the Mummers clubs and parade.

That feeling led Harrison to gather with a handful of other activists Friday before the Octavius Catto statue on the south side of City Hall to call for the Mummers and the annual Jan. 1 parade to become more racially inclusive and the city stop covering ancillary costs related to the event.

Taxpayers shell out about $800,000 for the annual event, the majority of which is for public safety costs; about $100,000 of the tab is traditionally paid for by the nonprofit Greater Philadelphia Traditions Fund.

SugarHouse Casino has been the title sponsor of the parade since 2012, and will continue through 2020, said spokesman Jeff Shurilla in an email.

In response to the skit, Shurilla said: “SugarHouse Casino sponsors the Mummers Parade as a community service and has no role in determining the parade content or outcome.”

George J. Badey III, a spokesman for the Mummers, said in an email that the Mummers have a long history of poking fun at politicians and celebrities.

“There’s also that pesky First Amendment,” Badey added. “Trying to muzzle legitimate, non-racist, free speech criticism of political figures by calling it racism is more than plain wrong. It does a disservice to and impairs the serious and crucial goal of improving race relations in our society.”

Kenney said in an email that he understands why the skit was offensive to people, regardless of the race of the performer depicting Jay-Z, and the performance has raised larger issues for Philadelphians, especially African-Americans.

“There has been a long history of racist themes in the parade, and while it has come a long way, it’s obvious that the Mummers still have much more work to do to ensure this is a parade that every Philadelphian can enjoy,” Kenney said.

Kenney said he was committed to working further with the Mummers and communities across the city to “ensure diverse viewpoints are represented and respected.”

“But I also urge the Mummers organization to commit more resources toward comprehensive anti-racism and anti-bias trainings for its members. We’ll only truly be a united city when we all understand and respect each other’s experiences and perspectives.”

The parade’s history of including racially charged and offensively stereotypical performances — as well as the use of blackface — is well-known to Blacks and people of color in the city, said Chad Dion Lassiter, executive director of the state Human Relations Commission and expert on race relations.

The skit was a continuation of the Mummers being “vile and discriminatory and racist” when put in the context of the parade’s long history of racism, Lassiter said. The fact that a Black man portrayed Jay-Z made it no less offensive, he said.

“You found a Black person to do the bidding of a form of discriminatory behavior,” Lassiter said. “Just because the person was Black and not in blackface does not mean that you were not trying to go in the same direction historically in the past. You just did it without the blackface.”

Badey said the skit referenced a political cartoon that parodied a July incident when Kenney called for moving Jay-Z’s annual two-day Made in America music festival from the steps of the Philadelphia Museum of Art starting in 2019. But after Jay-Z published an op-ed online and held meetings with the administration, Kenney reversed course.

Lassiter said the city should maintain the annual parade, but called on the city to have greater oversight of the parade and the performances to prevent racist behavior. That oversight, he noted, also ought to be performed by a racially inclusive set of people.

Harrison, the activist outside City Hall, was joined by Abdul-Aliy Muhammad and Shani Akilah, both of the Black and Brown Workers Cooperative, as well as Melissa Robbins and Sherrie Cohen, both at-large candidates for City Council.

Unlike Harrison, Akilah called for ending the more than century-old parade and condemned the Jay-Z/Kenney skit.

“We are demanding a divestment by the city — that means no more resources towards spaces like the Mummers, where people get to show up in blackface and call it creativity,” she said.

The Finnegan group’s skit on Jan. 1 was not the first to draw criticism.

In 2016 the Finnegan group depicted former Olympic athlete Bruce Jenner, who had come out as transgender woman Caitlyn Jenner. That skit depicted a man as Bruce Jenner who changed into a woman’s costume while “Dude Looks Like a Lady” by Aerosmith played in the background.

It wouldn’t be a Mummers Parade without controversy.

Black face has been outlawed for over 50 years by mummers rules and regulations designed by mummers and the City of Phila. If anything, this was clearly a slam to the Mayor . Black drill teams are not mummers. Yet they participate. They could perform as traditional mummers. You do not hear outrage from the mummers condemning the City for allowing participation of these groups. Rather, there was no outrage, outcry or demand for exclusion. Instead mummers clubs welcomed them without any demand from the City. I believe these individuals crying racism will use any venue to enable their 15 minutes of fame. If you are truly advocates for your race, start a program with the city to revitalize your neighborhoods. Instead of using tax dollars for welfare, set up programs like Roosevelt did, not only for blacks, but homeless etc. Get America's neighborhoods to work together and stop focusing on the mummers who provide food for veterens, money for cancer research, and hold benefits to help many other causes.

I don't see it as racist. I see it as a slam to the mayor. If anything you are seeing something that did not exist