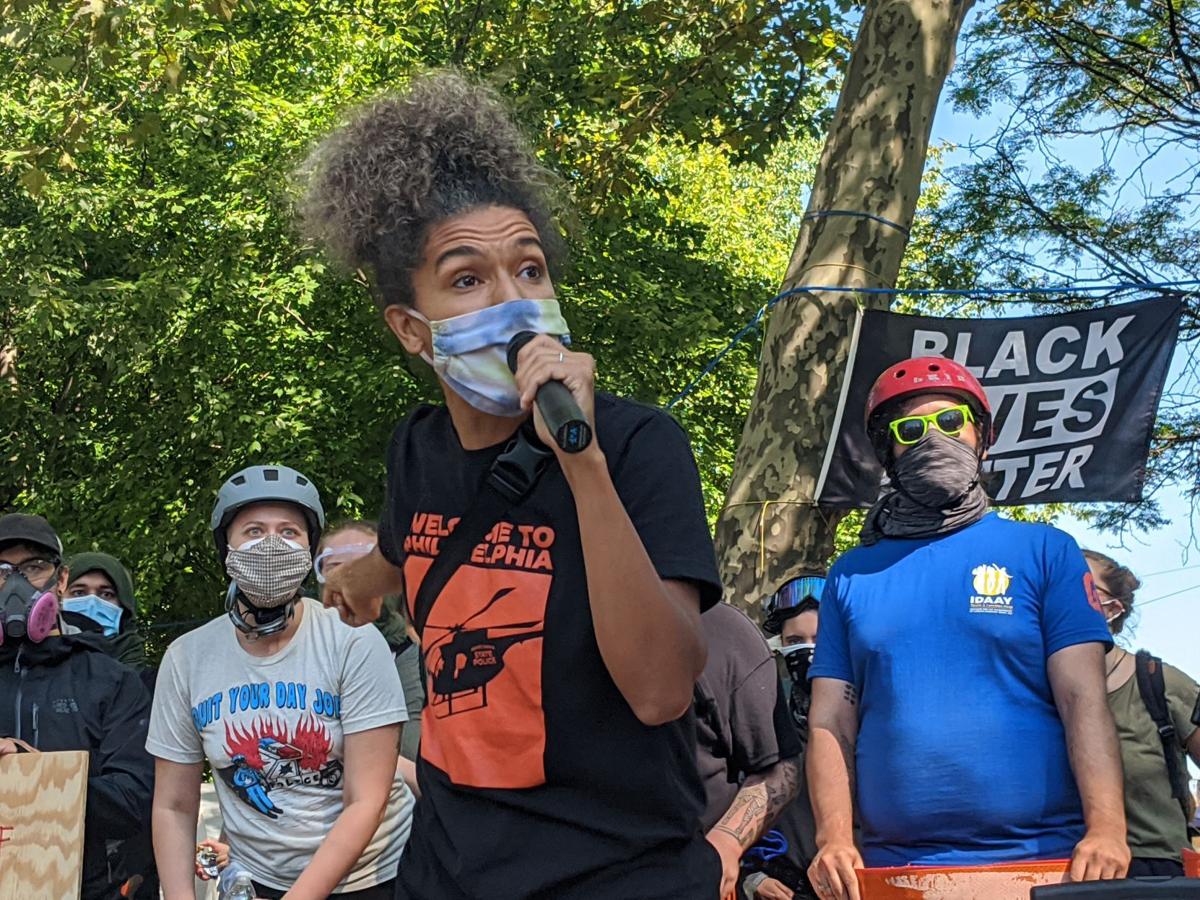 “There’s some sort of cognitive dissonance in this administration, saying that they’re doing something and acting out other violences, like terrorizing these folks,” says Samantha Rise, a supporter of the encampment. — Tribune Photo/Michael D'Onofrio 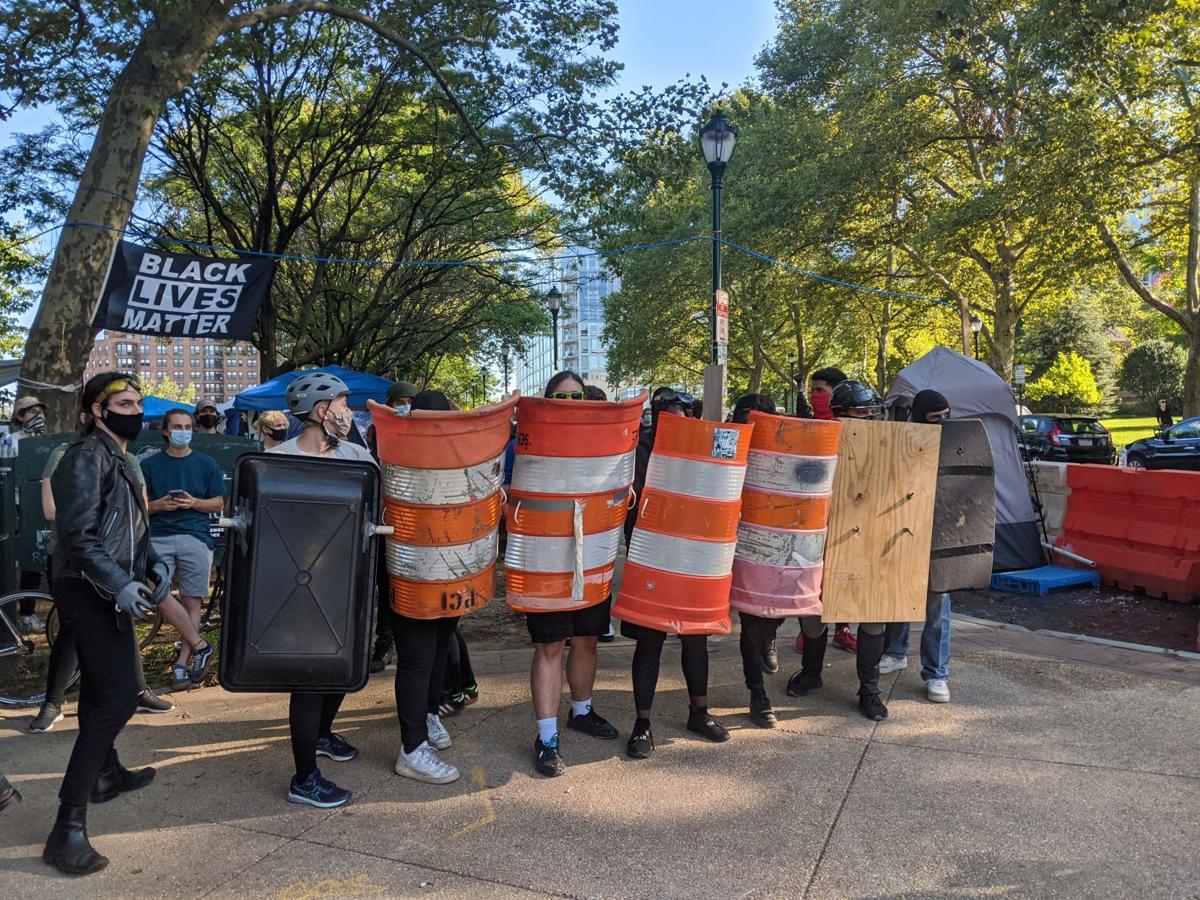 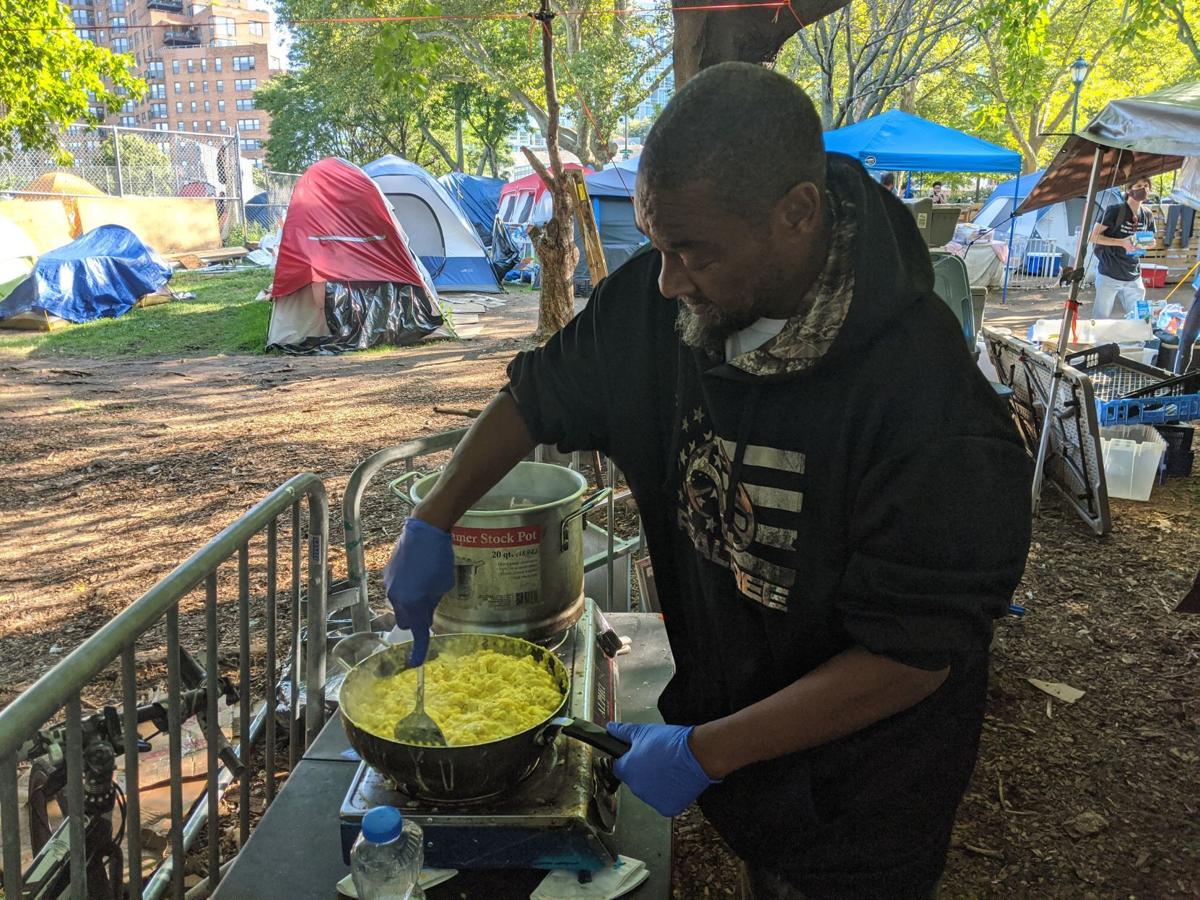 'I love to cook and give back to what they gave me,' says a 63-year-old man named Buck, who was making breakfast for protesters on Tuesday. — Tribune Photo/Michael D'Onofrio 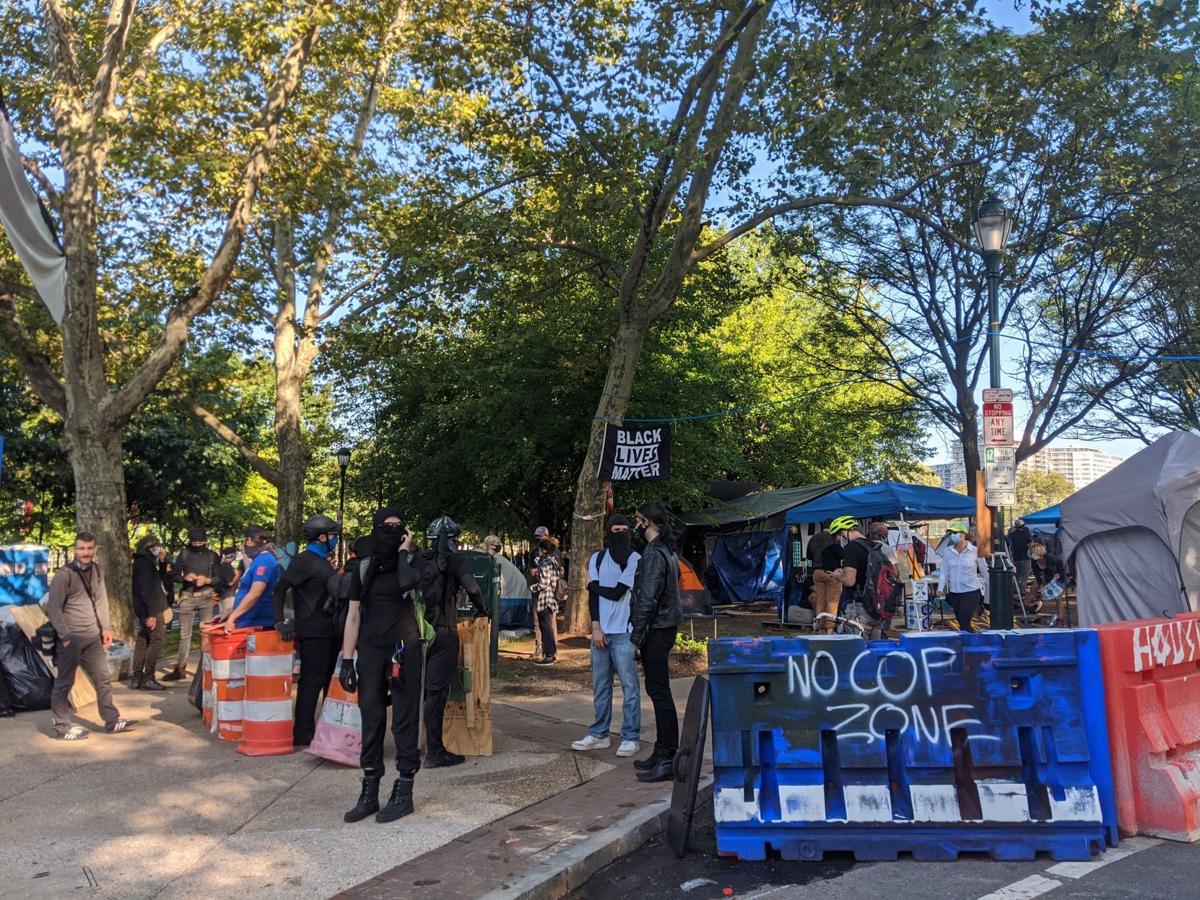 Protesters and supporters gather around the James Talib-Dean encampment on the Benjamin Franklin Parkway at 22nd Street on Tuesday shortly before Mayor Jim Kenney's 9 a.m. order to disband the camp. — Tribune Photo/Michael D'Onofrio

“There’s some sort of cognitive dissonance in this administration, saying that they’re doing something and acting out other violences, like terrorizing these folks,” says Samantha Rise, a supporter of the encampment. — Tribune Photo/Michael D'Onofrio

'I love to cook and give back to what they gave me,' says a 63-year-old man named Buck, who was making breakfast for protesters on Tuesday. — Tribune Photo/Michael D'Onofrio

Protesters and supporters gather around the James Talib-Dean encampment on the Benjamin Franklin Parkway at 22nd Street on Tuesday shortly before Mayor Jim Kenney's 9 a.m. order to disband the camp. — Tribune Photo/Michael D'Onofrio

Organizers of two pro-affordable housing encampments and the Kenney administration hastily organized a meeting on Tuesday hours after protesters refused to comply with the mayor’s order to disband the camps.

Sterling Johnson, a member of the Black and Brown Workers Cooperative who helped form the encampments, remained optimistic that continued negotiations with the administration would yield agreements.

But the notice the administration posted yesterday ordering for the eviction of protesters from the encampments at 9 a.m. today was “really disruptive to people’s lives,” Johnson said.

The meeting comes a day after protesters filed an injunction in federal court that seeks to stymie the city’s effort to forcibly remove the camps on the Benjamin Franklin Parkway at 22nd Street and in North Philadelphia on a Philadelphia Housing Authority-owned lot at 21st Street and Ridge Avenue.

A hearing for the protesters' restraining order against the city is scheduled for this afternoon, said Delaney Keefe, a law student who helped filed the injunction.

The injunction, Keefe said, was filed to “stop the city from disbanding and destroying the encampments until such time as they are able to create a plan to which they can be held accountable for getting all these people housed.”

“We strongly believe that those in the camp will voluntarily decamp, and avail themselves of the services being offered,” Dunn said.

Negotiations between the administration and protest organizers reached an impasse last week.

The James Talib-Dean encampment located on a baseball field on the Benjamin Franklin Parkway, where at least 150 individuals currently live in tents, swelled with supporters on Tuesday well in advance of the city’s 9 a.m. deadline to vacate.

Some protesters were clad in homemade riot gear, including goggles, gas masks and body armor, and some wielded makeshift body shields made out of traffic barrels and other materials. They formed a barricade at the intersection of the parkway and 22nd Street.

But the administration did not send police and garbage crews to forcibly remove protesters and breakdown tents, unlike in 2018 when Kenney ordered the closure of drug encampments in Kensington.

Samantha Rise, a supporter of the encampment, said Kenney’s order was a “slap in the face” and he was ignoring the needs of those in the camps.

“There’s some sort of cognitive dissonance in this administration, saying that they’re doing something and acting out other violences, like terrorizing these folks,” she said. “People need housing.”

At-large Councilwoman Kendra Brooks, a member of the Working Families Party, said she disagreed with Kenney’s order to close down the camps — “We shouldn’t disband without solutions.”

While standing on 22nd Street among protesters, Brooks said the city’s current housing policies and programs were too bureaucratic, underfunded, and failed Black people.

“The systems that were set up for this city weren’t designed for poor Black people,” Brooks said. “They were designed to keep people oppressed.

“Before the pandemic, they [homeless individuals] were all over the place … but now it’s congested in one area and it’s affecting white people and it’s a problem,” Brooks added. “And people are more concerned about their f---ing park than Black lives and that’s a problem to me.”

Councilwoman Jamie Gauthier, a Democrat from District 3 who was also at the camp, demanded in a letter to Kenney Monday that the mayor not close the camps; Brooks co-signed the letter.

“It would be a terrible mistake to further traumatize a group of people who have rallied around a simple belief — that everyone deserves access to affordable, quality housing — simply because lines of communication have broken down,” Gauthier wrote in the letter.

As the city’s deadline passed, a 63-year-old African-American man named Buck cooked breakfast for protesters inside the camp.

While keeping an eye on a skillet of scrambled eggs and a pot of boiling potatoes at a kitchen in the camp, Buck, who declined to give his last name, said he had received and then left temporary housing provided through the city because he continued to return to the camp to cook for those living there.

If the city disbanded the camps, Buck was uncertain where he would spend the night but said he would miss cooking the most.

“I love to cook and give back to what they gave me,” he said.

The Kenney administration and PHA President Kelvin Jeremiah have maintained they were meeting protesters half-way by agreeing to several commitments. Unilaterally transferring PHA-owned property also was a nonstarter, they argue, because its housing stock is held in trust for U.S. Department of Housing and Urban Development.

The encampments near the Philadelphia Art Museum and the other in North Philadelphia have roiled residents, who have called on Kenney to remove them.

Resident Susan Cole, who has lived in the neighborhood around the parkway encampment for two decades, said she was conflicted over the camp’s presence.

Yet she added: “I recognize that they need a place to go. This situation shouldn’t be happening, in the sense that there shouldn’t be people in this kind of situation to begin with, and so it shows a complete societal breakdown.”

City and encampment protesters to meet in federal court today

Encampment protesters safe from eviction --- at least until next week

Encampment Impasse: Kenney a no-show after invitation to brunch with homeless protesters

Mayor Jim Kenney stood up encampment protesters on their invitation to break bread together on Monday.