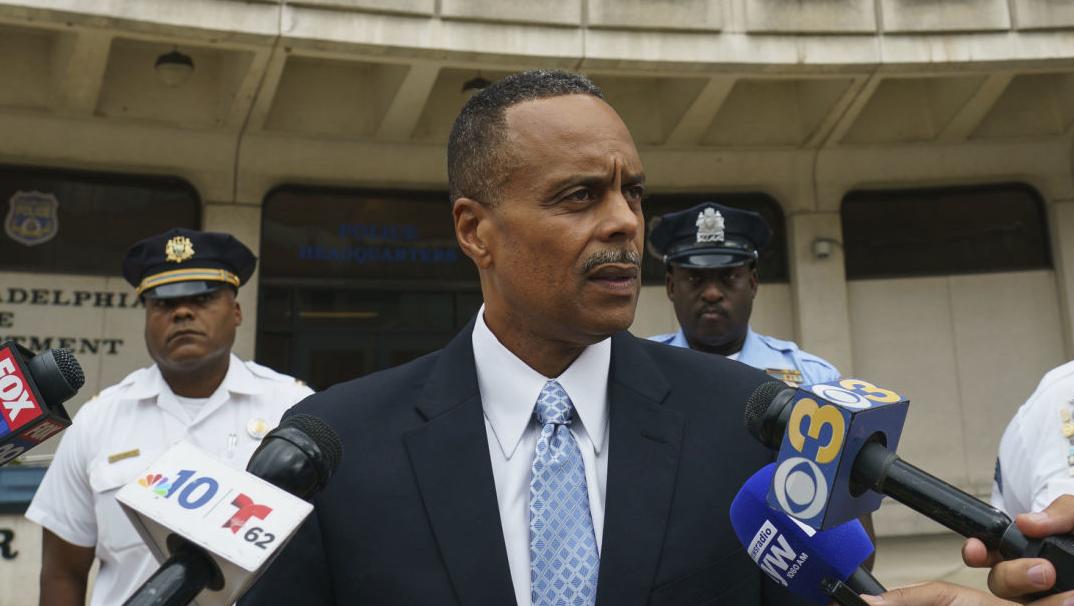 Former Philadelphia Police Commissioner Richard Ross speaks with the media outside Police Administration Building at 8th and Race streets on Wednesday. Ross abruptly resigned Tuesday, a day after a woman in the department claimed in a lawsuit that he allegedly ignored her claim of another officer’s sexual harassment. 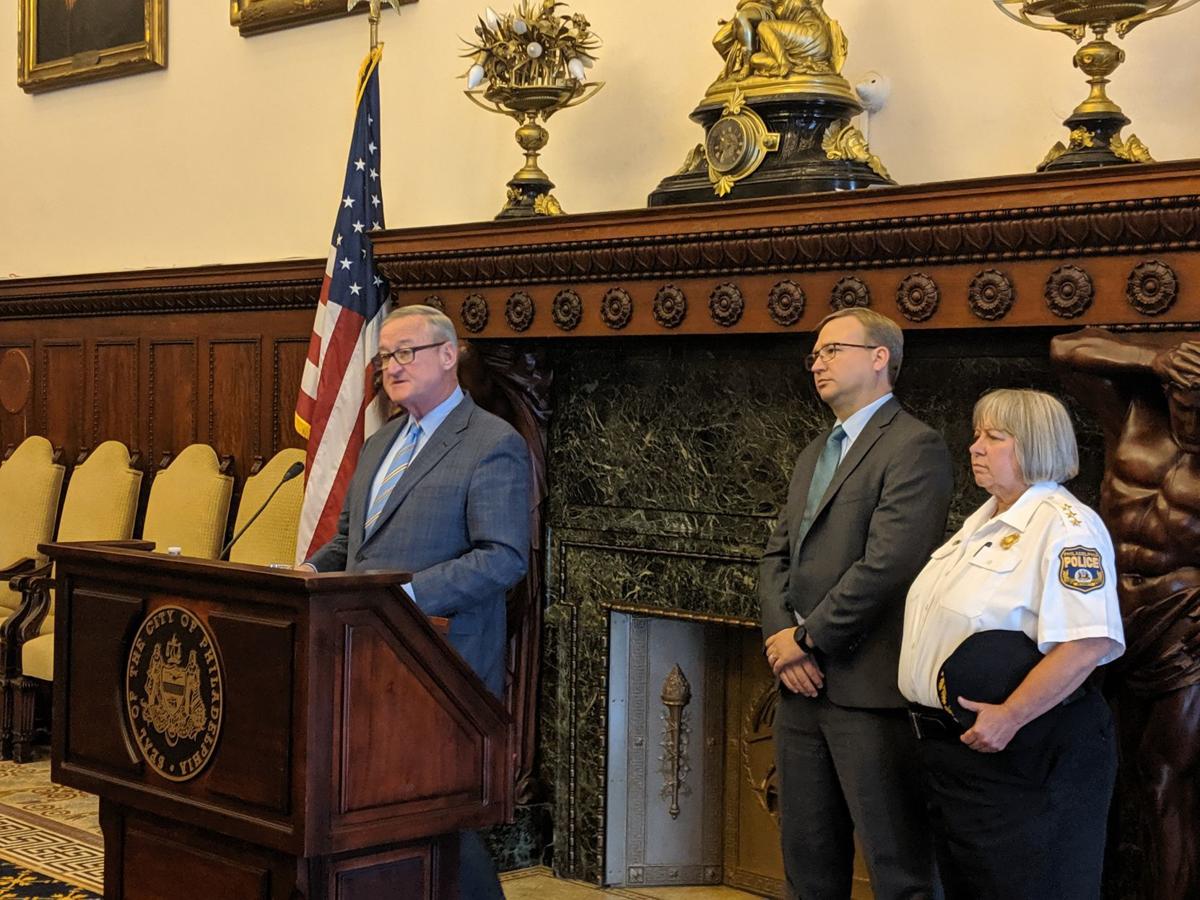 Former Philadelphia Police Commissioner Richard Ross speaks with the media outside Police Administration Building at 8th and Race streets on Wednesday. Ross abruptly resigned Tuesday, a day after a woman in the department claimed in a lawsuit that he allegedly ignored her claim of another officer’s sexual harassment.

The allegations of sexual harassment and discrimination by two Black Philadelphia police officers against others in the department were enough to compel the city’s top cop, Richard Ross, to resign.

But additional top brass in the department named in the legal action, including Mayor Jim Kenney’s interim pick to lead 6,300-member force, will remain in place.

In the wake of Ross’ resignation, Kenney evaded answering why the other police supervisors and Acting-Commissioner Christine Coulter won’t be affected by the allegations, saying he cannot comment about litigation.

Kenney said a third party will investigate the allegations and make recommendations.

“The investigation is ongoing,” Kenney said during a news conference Wednesday.

“We will have a new commissioner at some point in time,” he said. “We will have in place what we need to address these issues.”

Kenney spoke in the Mayor’s Reception Room beside Coulter, City Managing Director Brian Abernathy and others.

Kenney also shed light on the timeline of Ross’ resignation.

Ross gave his resignation to Abernathy on Monday, Kenney said. But the mayor said he spoke with Ross that same day and requested they revisit it on Tuesday because Kenney, who had returned from vacation, “wasn’t aware of all the details of what was going on”

Ross held firm to his decision to leave the department and Kenney announced Ross’ departure around 5:30 p.m. Tuesday.

“It was his decision,” Kenney said. “And I think it was the right decision for him.”

Kenney said he believed last week’s standoff in the Nicetown-Tioga neighborhood, in which six police officers were wounded, might have made Ross want to retire.

“I asked him, ‘Are you OK?’” Kenney said about a conversation with Ross after a news conference about the standoff. “He said, No, I’m tired. I’m really tired.’ I think that that’s all part of what this all culminated in.”

The mayor had glowing words for Ross, calling him a “great leader,” who improved transparency and data collection, and will leave the department better than when Kenney appointed him in 2016.

Ross, however, remains under a cloud of allegations that he resigned over failing to address the sexual harassment claims of two Black female officers, one of whom he allegedly had a love affair with.

“I’m happy that he’s served,” the mayor said. “I think he’s made great progress in the department.”

Ross, who was not at the news conference, maintained his innocence in an interview on Wednesday.

The former commissioner cautioned against “jumping to conclusions” over the allegations in the legal action.

“In my 25 years in [positions of] supervision [in the department], I have never had anybody complain about that because I have never done it,” he said, referring to the allegations.

“If anything, that’s what leaves me completely dismayed and frustrated on top of everything else.”

Ross, who joined the Philadelphia Police Department in 1989, has spent the last 14 years of his career in an executive leadership role.

"That's a long time at this level — to be dealing with the level of stress that you deal with in a big city that is fraught with a bunch of issues like Philadelphia," he said. "Gun violence, of course, has always been at the top of that list."

Ross said he has considered resigning several times over the last few years, particularly after the incident last year when police were called to remove two Black men from the Starbucks in Rittenhouse Square.

"I personally screwed up," he said, of his handling of the incident.

But various things kept happening that made Ross think he should stay, such as The Plain View Project's revelation of racist, violent and offensive Facebook posts made by hundreds of police officers.

"That was a black eye [for the department]," he said. "I didn’t want to walk out in the middle of that."

Ross said he is happy that the number of police-involved shootings has dropped under his leadership, that district commanders have increased community-engagement efforts, and the large-scale events the city has hosted (the Democratic National Convention, the NFL draft, the Eagles Super Bowl victory parade) have gone well.

Ross said he is also comforted by the fact that no officers have been killed in the line of duty while he's been commissioner.

The former commissioner said he knows some were not happy with his leadership.

But, he said, "I just sincerely hope that for the city I was born and raised in, that they give the next police commissioner, who is now acting, Christine Coulter, an opportunity."

Problems within the police department

Abernathy said the independent investigation looking into the allegations against Ross and others will also look at “broader issues” in the department, including the racist Facebook posts revealed by the Plain View Project.

The Philadelphia Police Department has had a series of sexual harassment allegations from within its ranks, some of which involved city payouts.

Asked how the department’s culture will change, Kenney said the sexual harassment directive he issued last year “is going to address a lot of these issues,” noting that there was ongoing training for supervisors and officers.

“We’re going to do our best to make it better,” he said.

But City Controller Rebecca Rhynhart, who was not present at the news conference, said in a released statement that Ross’ resignation showed there were “deeply ingrained [sic] cultural problems in the city, and specifically within the Police Department”

Rhynhart called on Kenney to address the current allegations of sexual harassment in the police department and install reforms, including a centralized reporting process.

“If Mayor Kenney and his administration are serious about changing the culture,” she said, “we need to deal with these specific cases, as well as look to citywide reforms on how sexual misconduct allegations are handled.”

Of the many issues that kept former Philadelphia Police Commissioner Richard Ross awake at night, nothing troubled him more than the inability…