A file photo from July 10 of the encampment at the intersection of 22nd Street and Benjamin Franklin Parkway on Von Colln Memorial Field. 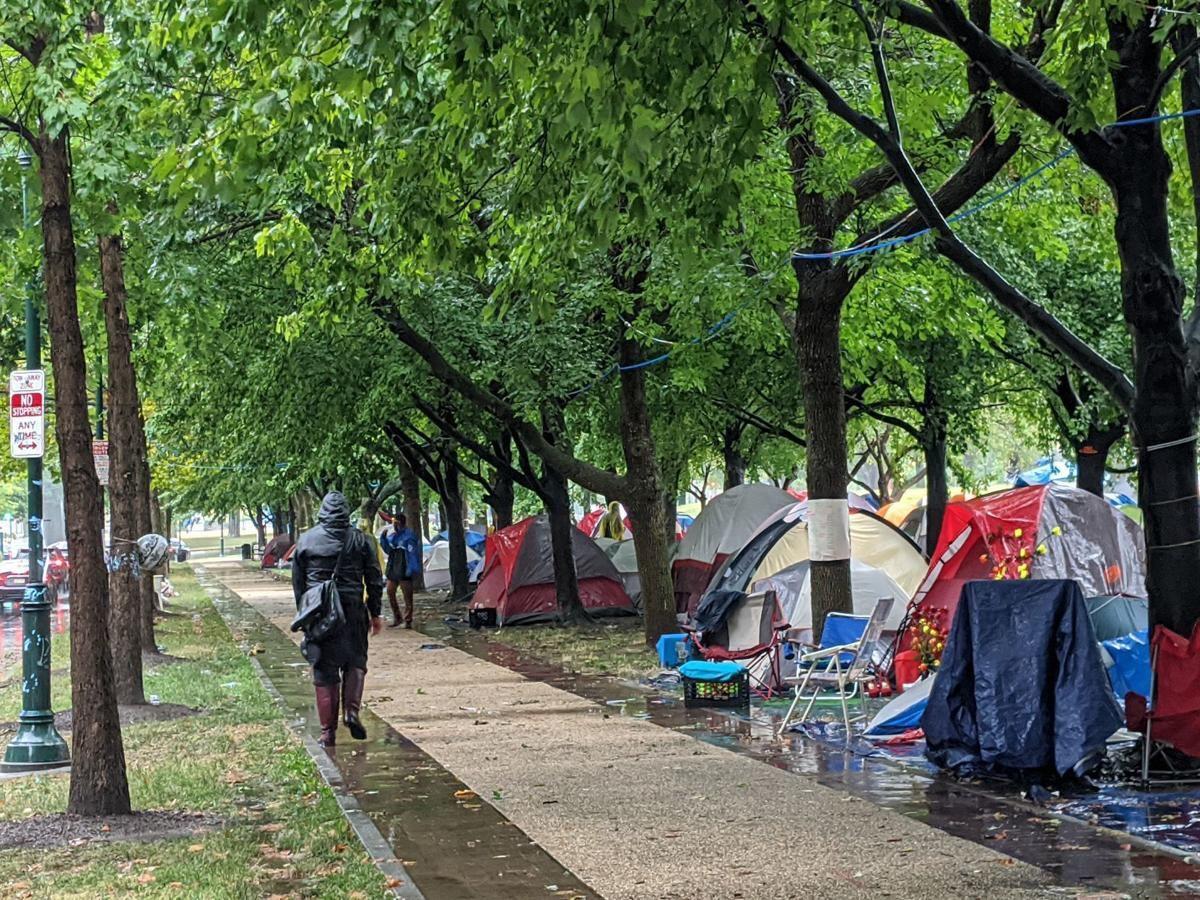 A file photo from July 10 of the encampment at the intersection of 22nd Street and Benjamin Franklin Parkway on Von Colln Memorial Field.

Yet organizers for the camps are refusing to move.

In an unexpected turnaround today, city officials said they will evict the camps starting at 9 a.m. Tuesday. City notices informing protesters to disband the camps were posted Monday morning, giving them approximately 24 hours to vacate.

City officials and protesters have negotiated for weeks without reaching an agreement, and Mayor Jim Kenney said continuing to negotiate would be “fruitless.”

“When I stepped into these discussions, I voiced the hope that a resolution was possible. I no longer harbor such hope,” Kenney said in a written statement.

The mayor said negotiations with protest organizers broke down last week when organizers pledged to remain at the camp until all their demands were met. Kenney accused camp organizers of shifting their demands and seeking things outside the city’s control.

The mayor has never ruled out using police to forcibly remove protesters from the encampments.

Philadelphia Housing Action, a coalition of activists and groups leading the camps, tweeted this morning that protesters will defend the camps.

“We can defend both camps but we need everybody to mobilize!” Philadelphia Housing Action tweeted.

The coalition called on individuals to rally at the camps starting at 8 p.m. on Monday and sleep there overnight.

Jennifer Bennetch, founder of activist group Occupy PHA and a main organizer of the North Philadelphia encampment, said protesters will not willingly move from the sites and slammed officials for the short notice.

“It’s very disturbing that the city and PHA would post these notices demanding people who have nowhere to go leave with less than 24 hours notice,” Bennetch said.

Kenney’s move to break up the protest camps came days after Liz Hersh, Philadelphia’s director of homeless services, put a positive spin on the ongoing negotiations, saying the administration had set a deadline for them to end.

Protest organizers on Friday said negotiations were at an “impasse.”

The larger protest camp, where more than 100 individuals are living in tents, has remained on a baseball field at 22nd Street and the Benjamin Franklin Parkway since early June. The site is known as the James Talib-Dean encampment, named after an affordable housing activist who died.

A smaller camp has been set up on a Philadelphia Housing Authority-owned (PHA) lot at 21st Street and Ridge Avenue since late June. Approximately 20 individuals are living at that camp.

Kenney originally set a June 17 deadline for disbanding the camps before backtracking.

PHA President Kelvin Jeremiah said in a joint statement with the mayor that the “encampment is not the solution” to the affordable housing crisis in Philadelphia.

“The encampment leaders’ unreasonable demands would have required PHA to violate federal policies or regulations and that is not acceptable,” Jeremiah said.

“The city and PHA, in particular, were never negotiating in good faith,” she said. “They came to the table with what they couldn’t do and they offered a bunch of things that were really things they were already planning.”

The Kenney administration and Jeremiah contend they have met protesters half-way by agreeing to several commitments, including the creation of a so-called tiny house village by the year’s end; providing rental assistance; offering social services and temporary housing to individuals; and a moratorium on some of PHA’s property sales, among other things.

However, protest organizers have rejected those commitments, arguing they lacked the urgency to address the city’s affordable housing crisis.