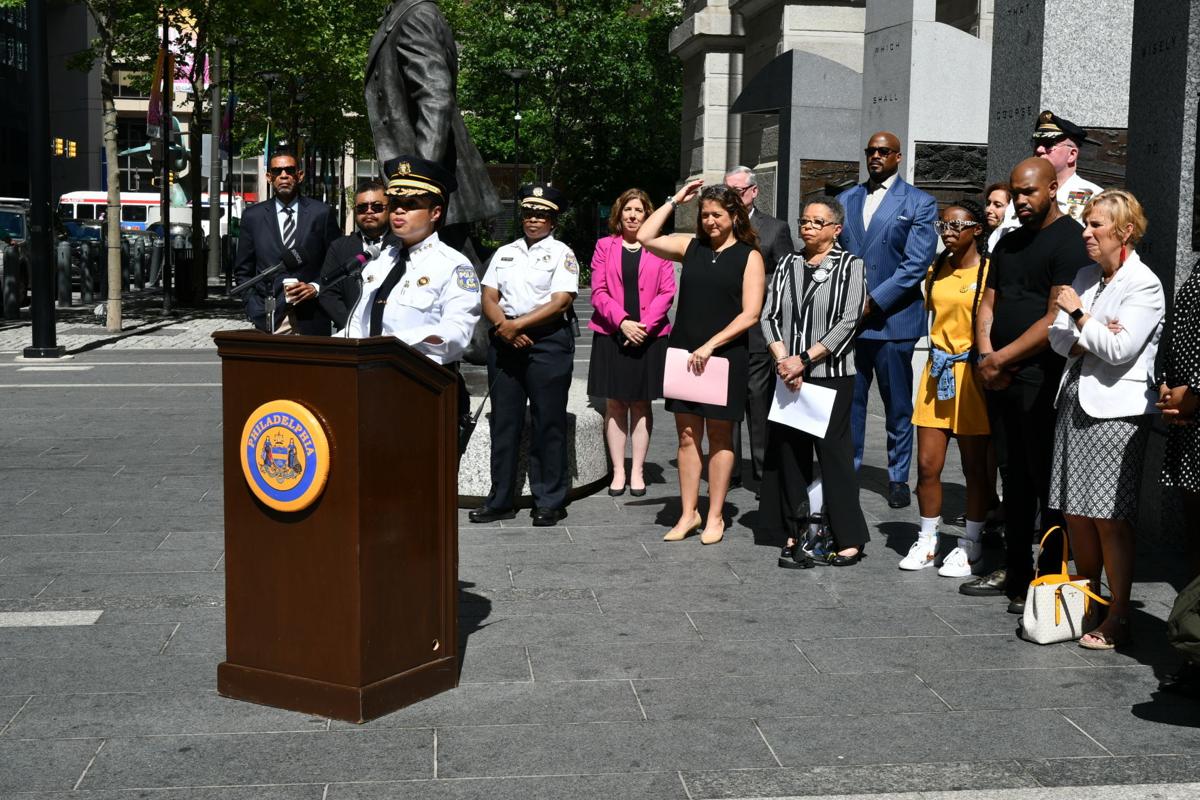 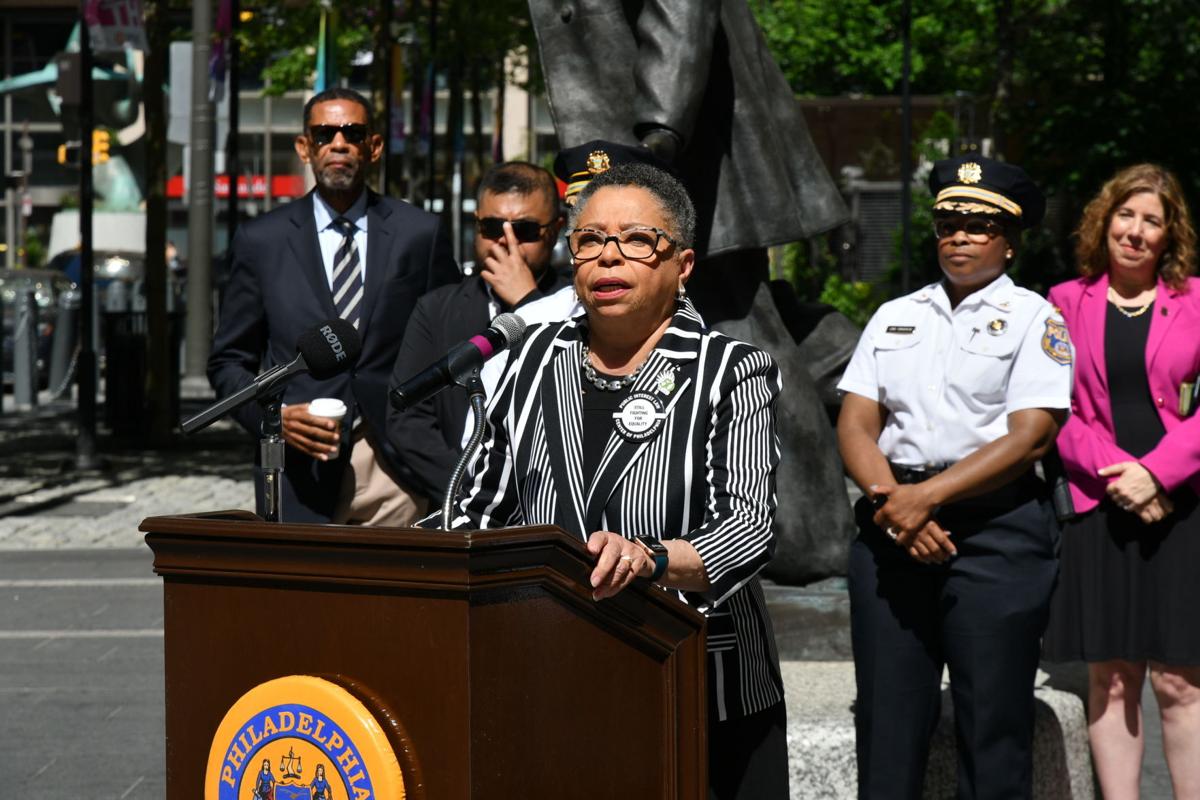 Sharmain Matlock-Turner, president and CEO of the Urban Affairs Coalition, speaks during the report’s release.

Sharmain Matlock-Turner, president and CEO of the Urban Affairs Coalition, speaks during the report’s release.

While acknowledging more progress is needed, Kenney stressed that surging gun violence in the city is not a barrier to taking on issues, calling that a “false equivalent.”

“We’ll get the homicide rate down with help from whoever we can get help from,” Kenney said. “It doesn’t stop us from talking. That’s a false equivalent. We can still talk and engage and plan and make things better while we’re working on other crime problems.”

On Tuesday, the Kenney administration released a one-year progress report from the city’s Pathways to Reform, Transformation and Reconciliation steering committee, which was tasked with identifying and eliminating the inequalities that have long repressed Black Philadelphians and other residents of color.

The 33-page report details the law enforcement, economic and public health reforms and community engagement efforts made by the Kenney administration and steering committee.

Kenney formed the steering committee last year in the wake of protests and civil unrest here over Floyd’s killing and the police department’s militaristic and heavy-handed response. The committee is made up of a diverse collection of civic, faith leaders and community groups.

Efforts and reforms detailed in the report include:

The removal of the controversial statue of former police commissioner and mayor Frank Rizzo at the Municipal Services Building. For many residents of color, Rizzo represented brutal police tactics and race-based policies that favored whites.

Engagement with at-risk youth to hear their thoughts about solutions to violence and other issues.

Enactment of police reforms that limit when officers can use certain types of physical restraints, like kneeling on a person’s neck, and more clearly define when the department can deploy tear gas and rubber bullets.

Moving toward the creation of a new Citizen Police Oversight Commission.

While standing beside Kenney and other officials at the Octavius Catto monument outside City Hall, Police Commissioner Danielle Outlaw said reforming the police department and reducing crime will depend in part on improving community relations.

“How do we get more witnesses to come forward if we’re not seen as legitimate, if we’re not holding ourselves accountable?” Outlaw asked.

The police commissioner said she came to realize through listening sessions with city youth that there is a “huge disconnect” between them and her department.

“We heard a lot of things and it wasn’t always easy to hear the feedback that we were getting [from young people] but they were right and we recognize that we really have to listen to our young people,” Outlaw said.

As Kenney and officials touted the city’s efforts during the past year, the City of Brotherly Love is outpacing last year’s historically high homicide rate.

The city had 247 killings as of Tuesday, up 36% compared with the same time last year, according to the police department’s online database.

The mayor stressed that racial inequities in the city could not be fully rooted out in a year. Kenney, whose term ends at the end of 2023, said he hoped the next mayor would continue the steering committee’s work.

“These are systemic issues of racism,” Kenney said. “They’ve been around for 400 years and you can’t fix it in one — I don’t think you’ll ever fix it all totally but you can’t certainly address it competently in one year and I’m hoping this [steering committee] goes on and on.”

Kenney’s second budget after the killing of Floyd and the protests does not include any cuts to the police department’s $727 million allocation.

Police reform advocates have called on Kenney to either cut the police budget or siphon some of that funding into community-based initiatives and programs.

The Kenney administration and legislators continue to hash out a spending plan for the new fiscal year, which begins July 1. Legislators are pushing for Kenney to invest millions of dollars more in violence prevention initiatives.

Changes to disciplinary actions against cops and many of the most significant powers of the new yet-to-be-formed police oversight commission most likely have to be hashed out with the police union in its collective bargaining agreement.

The police union’s contract ends at the end of the month. The Kenney administration and police union are in arbitration now. Kenney declined to comment on the ongoing arbitration.

Carl Day, pastor of Culture Changing Christians Worship Center in North Philadelphia and member of the steering committee, maintained Black Philadelphians were better off compared with last year due to the reforms.

Day said he believed the most significant shift in the Kenney administration’s approach to addressing racial inequities was including at-risk youth in the process. In the coming year, he said, officials and community members must follow up and provide support and resources to young Philadelphians.

“The [Kenney] administration and activists and organizers as well alike, we’ve all got to come together,” Day said.

“Because there’s a game of cat-and-mouse with everybody and everybody’s trying to fight for money. But the bigger play is: Who is trying to build real relationships with these young people?”

Top police brass are concerned about escalating levels of violence this summer even as firearm arrests and crime gun recoveries swell.

Will Philadelphia see a rise in gun violence this summer?

Many of the powers envisioned for the proposed citizen police oversight commission will run up against a familiar obstacle to police reform: t…

Days after Philadelphia boosted funding for violence prevention initiatives, the fight for how to spend it and who should pay more has begun.