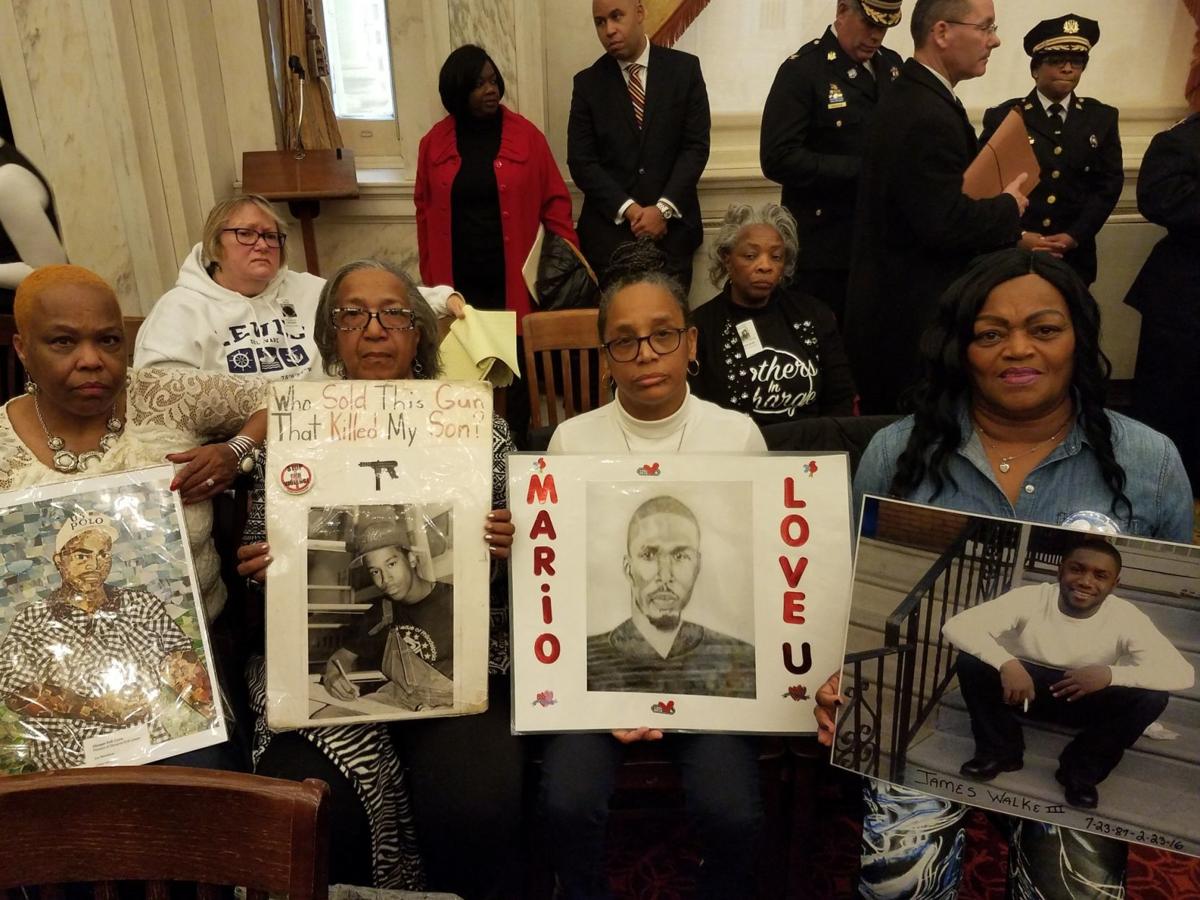 Several co-victims of gun violence pose with photos of their loved ones on Thursday in City Hall. — Courtesy of Philadelphia City Council

Several co-victims of gun violence pose with photos of their loved ones on Thursday in City Hall. — Courtesy of Philadelphia City Council

“I don’t want to wake up every day and see a different person taken from me; not just me, also their brothers and sisters, uncles and cousins, and mothers and fathers,” said the Walter B. Saul High School student.

Martin brought her fears and her dream — “peace in my community” — to the City Council’s Special Committee on Gun Violence Prevention hearing on Thursday in City Hall, which explored the effect of gun violence on victims and co-victims and the resources available to them.

The hearing, which was organized by Councilman Kenyatta Johnson, featured Police Commissioner Danielle Outlaw, Kenney administration officials and others.

Victims, families of victims and community activists voiced their frustration and anger with the Philadelphia Police Department and the city over unsolved murders; a lack of support services and coordination with community groups; and a failure to offer existing services and relocate witnesses and victims.

Stanley Crawford, 67, whose son’s murder 17 months ago remains unsolved, said murders in communities of color were not investigated the same as those in other communities.

“I believe the reason our babies’ murders are not being solved is because of racism and because of the color of our skin,” said Crawford, who founded the Black Male Community Council of Philadelphia, which promotes public safety and empowerment in Black communities.

Crawford called on the police department “to stop giving us excuses” about solving murders in communities of color, adding that blaming a no-snitch culture was putting the onus back on victims to solve their own murders.

“If they telling us they can’t solve the murders, then you in the wrong business,” he said.

Chantay Love, who lost her son to gun violence and founded the nonprofit Every Murder Is Real in his memory, said city agencies and law enforcement were failing to support or work with community groups to reduce gun violence.

“The red tape and the communication sucks,” she said. “We can’t no longer do that.”

With 51 homicides as of Wednesday in Philadelphia, the rate was up 21% compared with the same time last year. The Philadelphia Police Department’s homicide clearance rate was 61%, meaning about 40% of all homicides go unsolved.

Outlaw, who took over the 6,500-member police department on Feb. 10, said there is “a sense of urgency” to reduce violent crime in the city and acknowledged “the pain here in this room.”

“As a mother of two sons, I don’t know what I would do. I would be inconsolable, so I couldn’t imagine,” Outlaw said about how she would feel if she lost her children to gun violence.

“All I can do is put myself in the shoes of each of you and make sure that any decisions that we make are informed by that very passion and emotion that I feel if it were to happen to my loved ones.”

The commissioner shed light on how she generally intended to address gun violence, which included clearly communicating with stakeholders; leveraging new technologies and data; and consistent training and accountability for officers.

“We will be a learning organization,” Outlaw said. “And I also believe in working with others to break down the silos that too often impede progress of community engagement and inclusion.”

The strategy is based on the law enforcement strategy known as “focused deterrence,” which targets high-risk individuals in specific areas of the city. The model is part of the Kenney administration’s long-term plan to reduce gun violence.

That model, which has been used in Chicago and Oakland, was used in Philadelphia in 2013 for a two-year pilot program and was credited with a decline in shootings.

Illegal guns were the source of much of the city’s issues, Garrett Harley said. She called on state lawmakers to allow Philadelphia to enact its own gun regulations.

“We know much of the problem stems from the free-flowing tide of illegal guns into our city and those with criminal backgrounds who are prohibited from having any access to firearms,” she said.

Garrett Harley said the administration continues to seek an executive director to oversee the city’s Rapid Response Team, which mobilizes services and support for victims, witnesses and communities affected by violence.

The city’s Community Crisis Intervention Program, which uses so-called “credible messengers” in the communities they serve to engage with those at risk of gun violence, was on track to have 64 crisis workers by April.

Dr. Ruth Abaya, who heads the city’s Injury Prevention Program housed within the Department of Public Health, said the agency was developing a database for firearm victims to better understand who is affected and where they are connecting with city services.

The Injury Prevention Program also has brought together city agencies and violence prevention groups to review firearm homicides and injuries. The collaboration, she said, found that data and information sharing have been barriers to helping those most at risk for violence.

Councilman Kenyatta Johnson, who headed the special committee, said the city was in “a state of crisis” over gun violence and the city’s budget should reflect that in terms of funding the police department’s homicide unit.

“Obviously, if the homicide rate is going up, the case load is getting larger, things fall through the cracks, people get burned out,” said Johnson, who is facing federal corruption charges.

Councilwoman Cindy Bass said crime was the number one issue for most Philadelphians.

“People feel very concerned. It’s a time like none other,” Bass said, adding, “It just feels that we need some help, desperately need some help.”

When people of color suffer from poverty and gun violence, white people are not interested in solving those issues, a Philadelphia elected off…