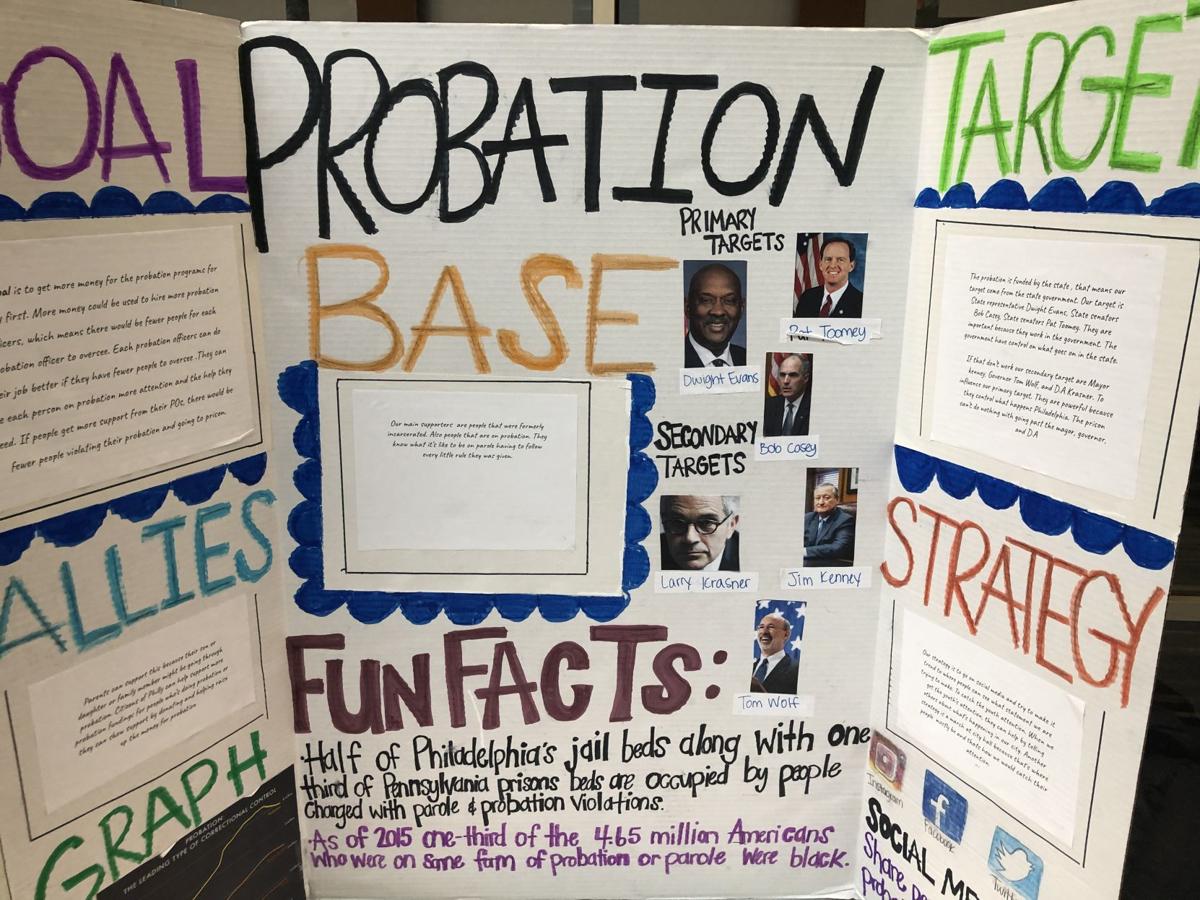 Ma’Kayoh Goodwire-Thomas and her classmate, students at The Workshop School, created a poster board to share what they’ve been studying and researching about mass incarceration during the third annual Student-Led Mass Incarceration Symposium, held Thursday afternoon at the School District of Philadelphia’s headquarters, 440 N. Broad St. — PHILADELPHIA TRIBUNE PHOTO/RYANNE PERSINGER 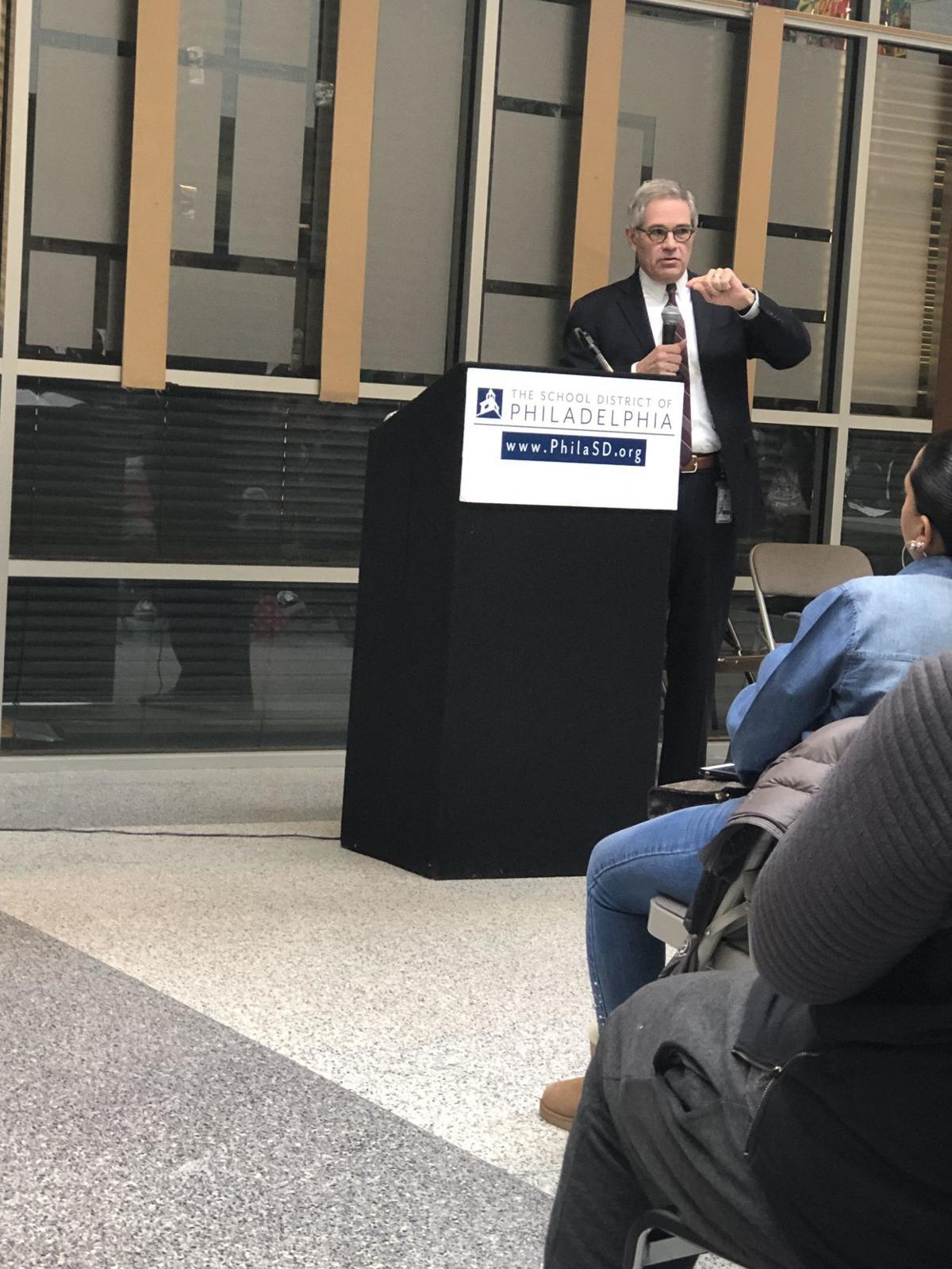 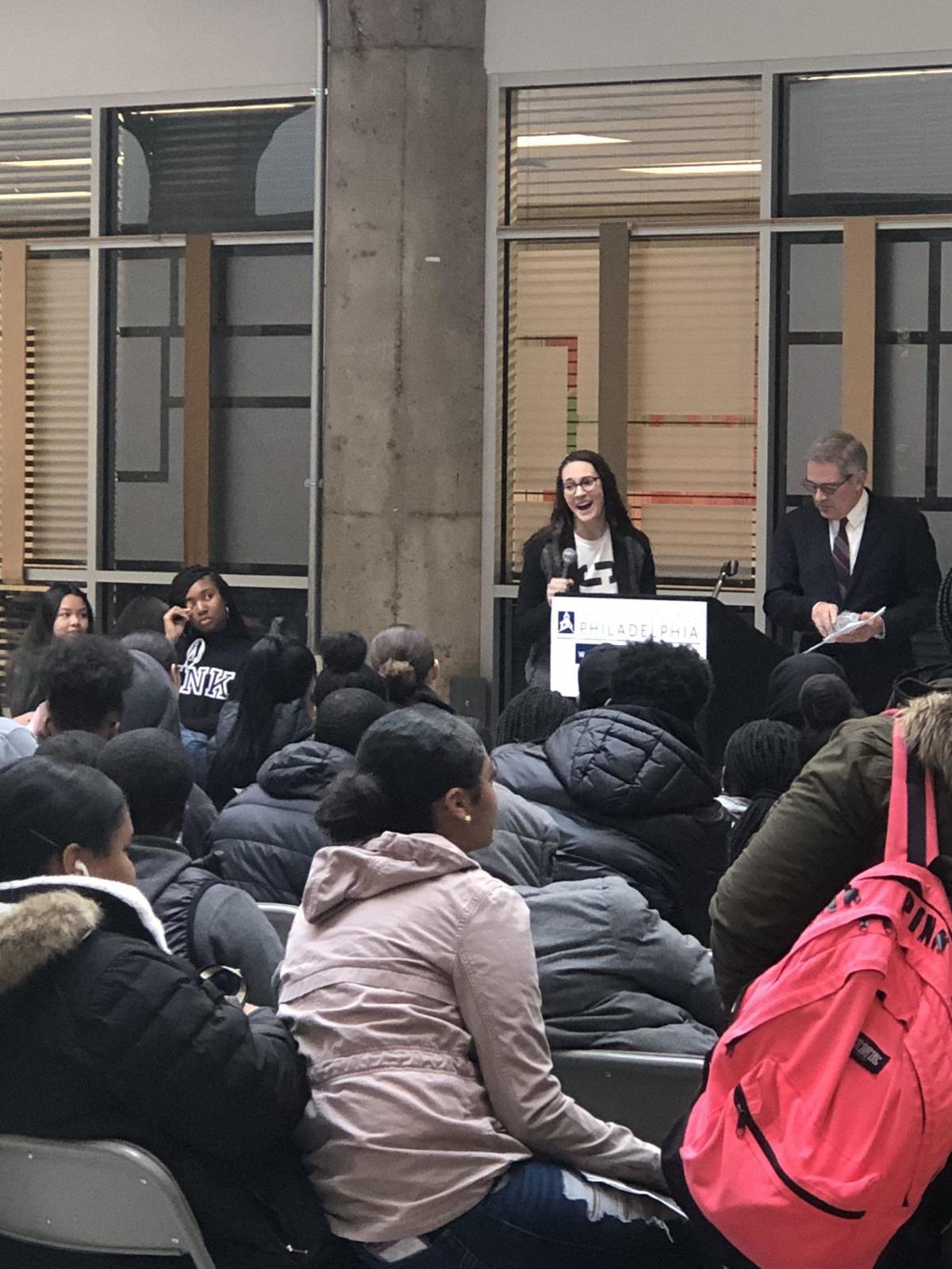 Ma’Kayoh Goodwire-Thomas and her classmate, students at The Workshop School, created a poster board to share what they’ve been studying and researching about mass incarceration during the third annual Student-Led Mass Incarceration Symposium, held Thursday afternoon at the School District of Philadelphia’s headquarters, 440 N. Broad St. — PHILADELPHIA TRIBUNE PHOTO/RYANNE PERSINGER

“People who go to jail are usually young,” Krasner said. “People who get pulled into the criminal justice system as juveniles are young, too. One in three Black men in the U.S. will experience jail in their lifetime.”

Sixteen year-old Ma’Kayoh Goodwire-Thomas said she has been learning about ways to help improve the criminal justice system.

She and another student created a poster board outlining their goal (more money for probation programs), probation base (main supporters who were formerly incarcerated), allies (parents and citizens), targets (U.S. Rep. Dwight Evans and U.S. Senators Pat Toomey and Bob Casey; Krasner, Mayor Jim Kenney and Gov. Tom Wolf) and strategy (by reaching out youth on social media and marching to City Hall) for helping to improve the system.

Under the poster’s facts reads, “As of 2015, one-third of the 4.65 million Americans who were on some form of probation or parole were Black.”

“Sometimes I feel like it’s not right,” Ma’Kayoh said. “They do put people in jail for no reason. There are more Black people locked up.”

Nasir Hanton, 15, feels re-entry programs are important for former offenders. He said receiving an I.D., being allowed to stay in halfway houses or a shelter or being able to get a job once you’re released from prison is important.

“After you’re sentenced and get your time, you should be able to re-enter society with a different mindset,” said Nasir, a student at The Workshop School. “Anything that gives you better information for you to go back into society is important.”

Krasner shared 10 different ways the criminal justice system can be fixed, including prosecuting fewer cases, stopping cash bail and enforcing shorter sentences. He talked about rapper Meek Mill, and technical violations, explaining how other states either do not send people back to jail for technical violations or do but for short periods of time.

Lastly, Krasner urged the students to register vote and to do so in every election.

“That’s the only way you are going to be able to defend your existence, meet your goals and change the world the way you want to change it,” Krasner added. “Until you can vote, there’s plenty things you can do. You can be activists on your own. You can march, you can protest, you can sign petitions and you can volunteer for a campaign. There’s nothing about that that you cannot do before you’re 18.”

Philadelphia Eagles safety Malcolm Jenkins is lending his voice to a growing movement in the city to make the criminal justice system more equitable.

Witness to Innocence celebrates 15th anniversary, calls for end to the death penalty

Each man walked across the stage at the National Constitution Center on Thursday. Some were solemn and stone-faced, while others looked reliev…

When District Attorney Larry Krasner began his attack on cash bail shorty after he was elected in 2017, he tpromised he would soon show proof …

Philadelphia leaders recognize National Day of Empathy for the incarcerated

After her release from prison in November 2017, Shawn Baker needed help.

DA seeks to reduce probation in many cases

Pointing to the punitive nature of parole and supervision in Philadelphia and across the state, District Attorney Larry Krasner has announced …