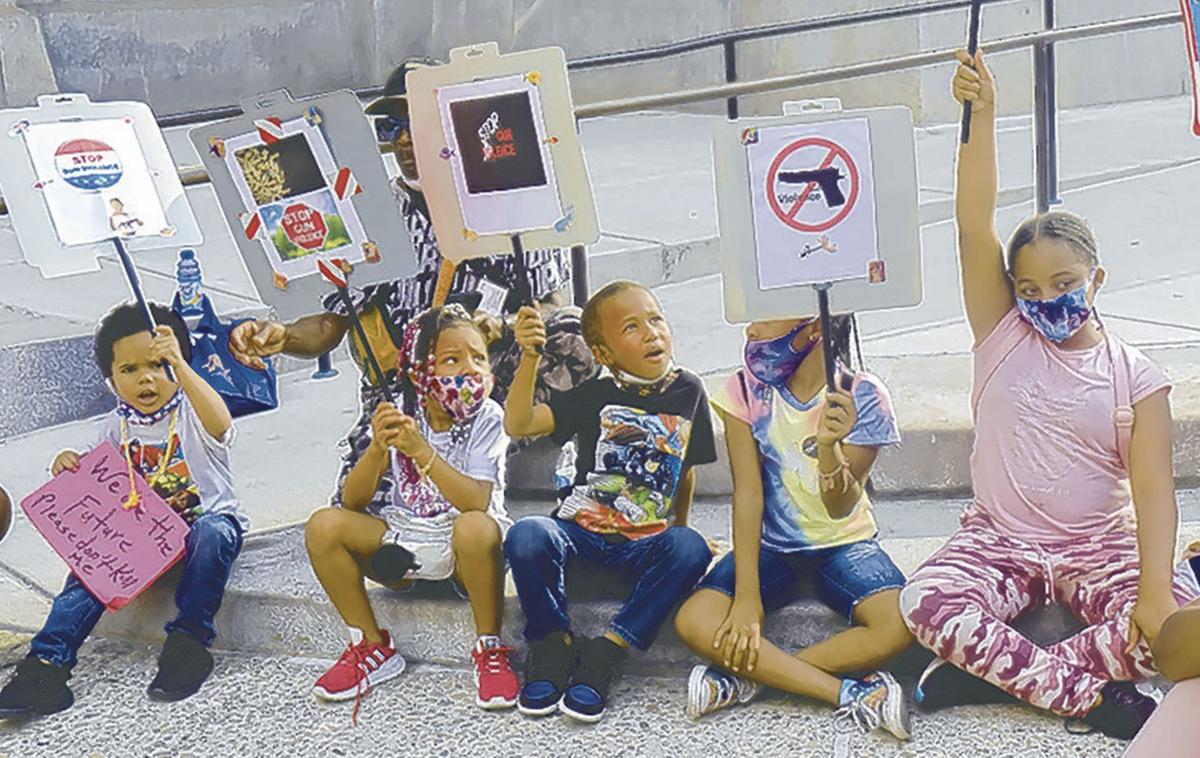 A group of children take part in the Day of Urgency rally against gun violence Aug. 4 at Philadelphia’s City Hall. —TRIBUNE PHOTO/JULIAN MOORE-GRIFFIN 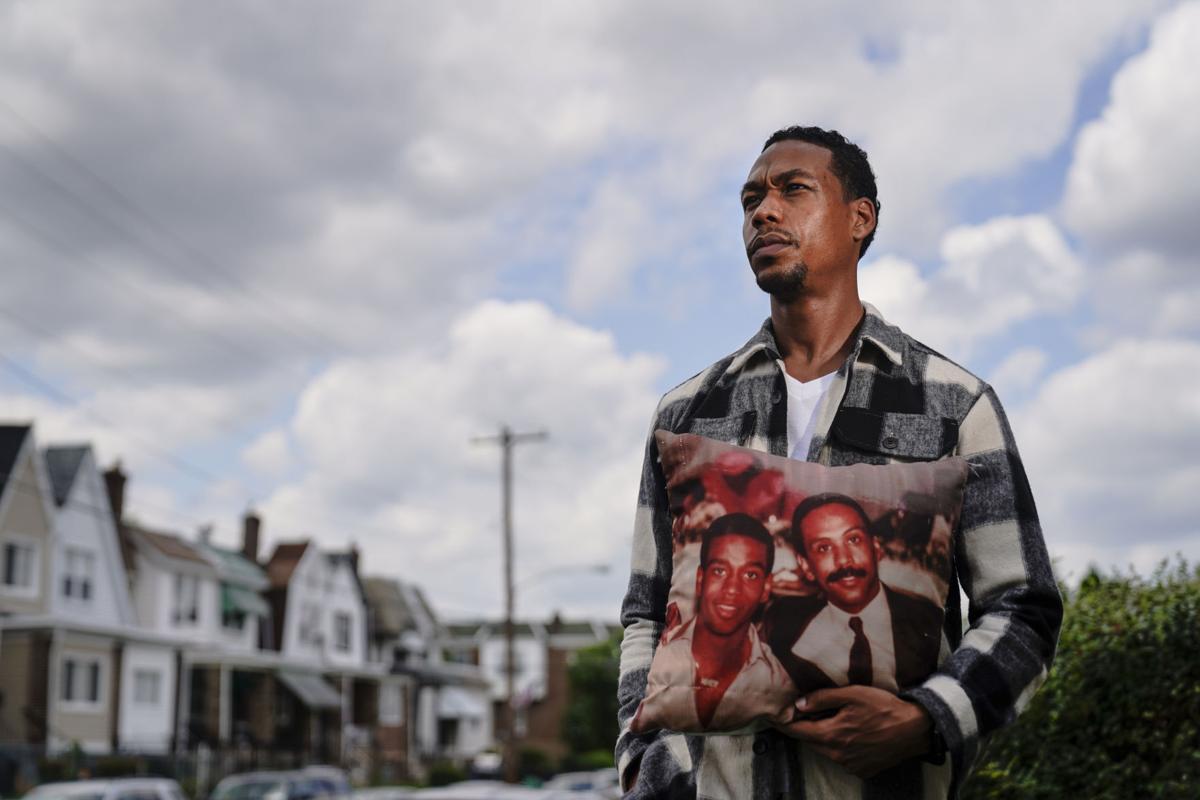 Brett Roman Williams holds a pillow with a photo of his father, Donald Williams, and brother Derrick Williams who both were killed by gunfire in Philadelphia, 20 years apart. Williams is now chairman of the Anti-Violence Partnership of Philadelphia’s board of directors. 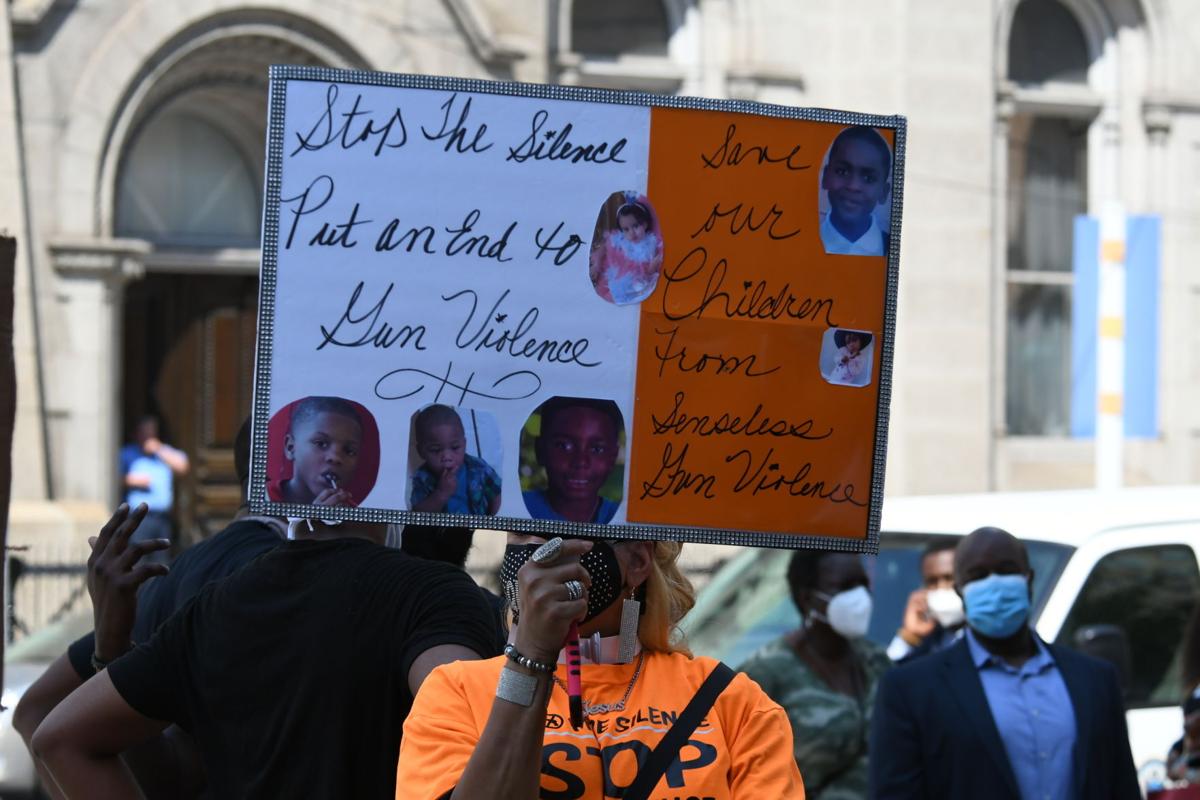 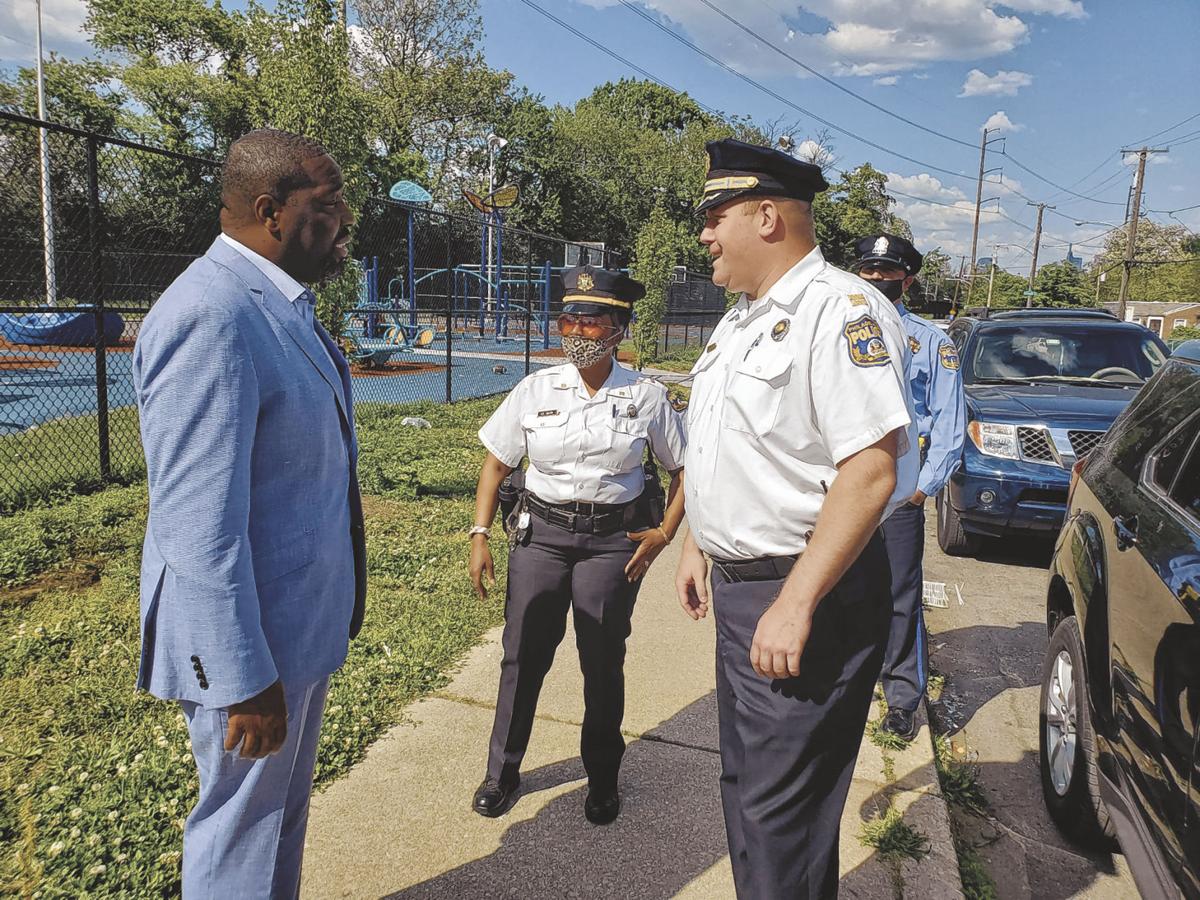 City Councilmember Kenyatta Johnson talks to police officers on one of his Peace Not Guns tours in his 2nd District. He is the chairman of City Council’s Special Committee on Gun Violence Prevention. —SUBMITTED PHOTO

A group of children take part in the Day of Urgency rally against gun violence Aug. 4 at Philadelphia’s City Hall. —TRIBUNE PHOTO/JULIAN MOORE-GRIFFIN

Brett Roman Williams holds a pillow with a photo of his father, Donald Williams, and brother Derrick Williams who both were killed by gunfire in Philadelphia, 20 years apart. Williams is now chairman of the Anti-Violence Partnership of Philadelphia’s board of directors.

City Councilmember Kenyatta Johnson talks to police officers on one of his Peace Not Guns tours in his 2nd District. He is the chairman of City Council’s Special Committee on Gun Violence Prevention. —SUBMITTED PHOTO

With violence on the rise among the city’s youth in recent years, addressing the trauma that kids face has become all the more crucial.

“I just remember the visceral response, I just started screaming. And after that, everything’s a blur,” said Brett Roman Williams, speaking about losing his father to gun violence at the age of 11. Williams, now 36, is chairman of the Anti-Violence Partnership of Philadelphia’s board of directors.

The Anti-Violence Partnership is a grant-funded non-profit in the city that seeks to end the cycle of violence in communities through support services. Their Youth Violence Outreach Initiative, which has partnered with more than 40 public and charter schools in the city, brings licensed counselors to teach students about violence prevention and conflict resolution and to provide therapy services.

In 2020, the city had a major spike in shootings matching the nationwide trend. There were 196 children under the age of 18 shot last year, a 65% increase from the previous year, according to data from the Center for Gun Violence Reporting at the Community College of Philadelphia. There have already been more than 100 shootings of minors in 2021, less than nine months into the year.

“We have to really begin to seriously look at the issue of gun violence from a public health lens,” said Councilmember Kenyatta Johnson. “The same sense of urgency that we used to address this COVID-19 pandemic, we have to take that same approach.”

Johnson is the chairman of City Council’s Special Committee on Gun Violence Prevention. The committee has been holding regular hearings inviting community members and organizations to get on the same page of the issue and raise awareness.

On June 1, council’s Committee on Children and Youth (of which Johnson is also a member) sent a proposal to Mayor Jim Kenney’s office calling for an increased investment in gun violence prevention. The proposal called for $100 million in additional funds with half of that directly going into youth programs.

“It’s not even a question of whether we should fund it,” Johnson said. “We know the city [of Philadelphia] is going to receive $1.5 billion from the American Rescue Plan so we want to make sure that those funds play a significant role in supporting gun violence prevention initiatives to support our youth.”

The proposed programs included expanding parks and recreation centers, increasing youth job training opportunities, and funding neighborhood-based trauma support services for youth. Ultimately, the approved budget increased anti-violence spending by about $68 million. The new Violence Prevention and Opportunity review committee, crafted out of the negotiations, will dole out funds to organizations applying to aid in the anti-violence effort.

Taking a closer look at the numbers, the issue becomes clear. According to the Urban Affairs Coalition, a non-profit in the city that helps to create opportunities in the region, 18,000 youth applied for employment over the course of summer 2019. But only 9,000 jobs were readily available. That gap, during an average year, leaves thousands without opportunity, and only worsens during the time of a pandemic. 2020 saw an increase to 20,000 applicants, and just 6,000 employed youth.

Following the national trend, the lack of operating workplaces and the shutdown of schools, businesses and recreation removed many outlets youth could turn to. And as this change in routine hit the working adult population hard and stress levels increased and mental health took a toll, it most certainly affected youth.

“What’s important for people to recognize is that our emotions, our understanding and how we process information changes just like our body changes,” said Dr. H. Jean Wright II of the Department of Behavioral Health and Intellectual disAbility Services or DBHIDS. “Depending on the age of the child, they are going to process their experiences in the world and the information they hear, see and are exposed to differently.”

As stressors like violence increase, Wright said, a child’s reaction to them can vary wildly — ranging from fear, to curiosity, numbness, and even acting out of violence themselves. How they have reacted in the past may no longer be the case in the future when they are faced with trauma.

But by the time you observe that change in behavior, it may be too late. The key is early intervention.

It’s a lesson that Williams learned much later on in life.

After graduating high school and attending Howard University in Washington, D.C., he poured himself into the social scene at the school. He became active in Greek life and mentor programs.

But over time, Williams could not keep up with the cost of tuition, and had to drop his classes. And that’s where he ran into trouble. As Williams began to act out he found himself in the office of the dean of students thinking he’d be expelled from the university. It was then that he finally opened up about his father’s passing.

“She pulled it out of me, and ever since then, I found my track,” Williams said. “At some point, life does catch up with you after such a huge loss.”

Williams went on to finish at Howard, but was met with tragedy once again, losing his older brother to gun violence in 2016.

This time around, he did things differently. He learned about the Anti-Violence Partnership through the victim services offered to him at the time and reached out.

“I think being that I’m in therapy now and I am an advocate for therapy, it’s starting to now bring the family together and we’re starting to have the conversations that we should have had 20-plus years ago,” Williams said. “If you’re hurting, don’t be afraid to ask for help.”

Families gathered at Vernon Park in Germantown on Thursday evening for a night of community unity and in recognition of Gun Violence Awareness Month.

Observers point to many different reasons for gun violence

It was all wrong.