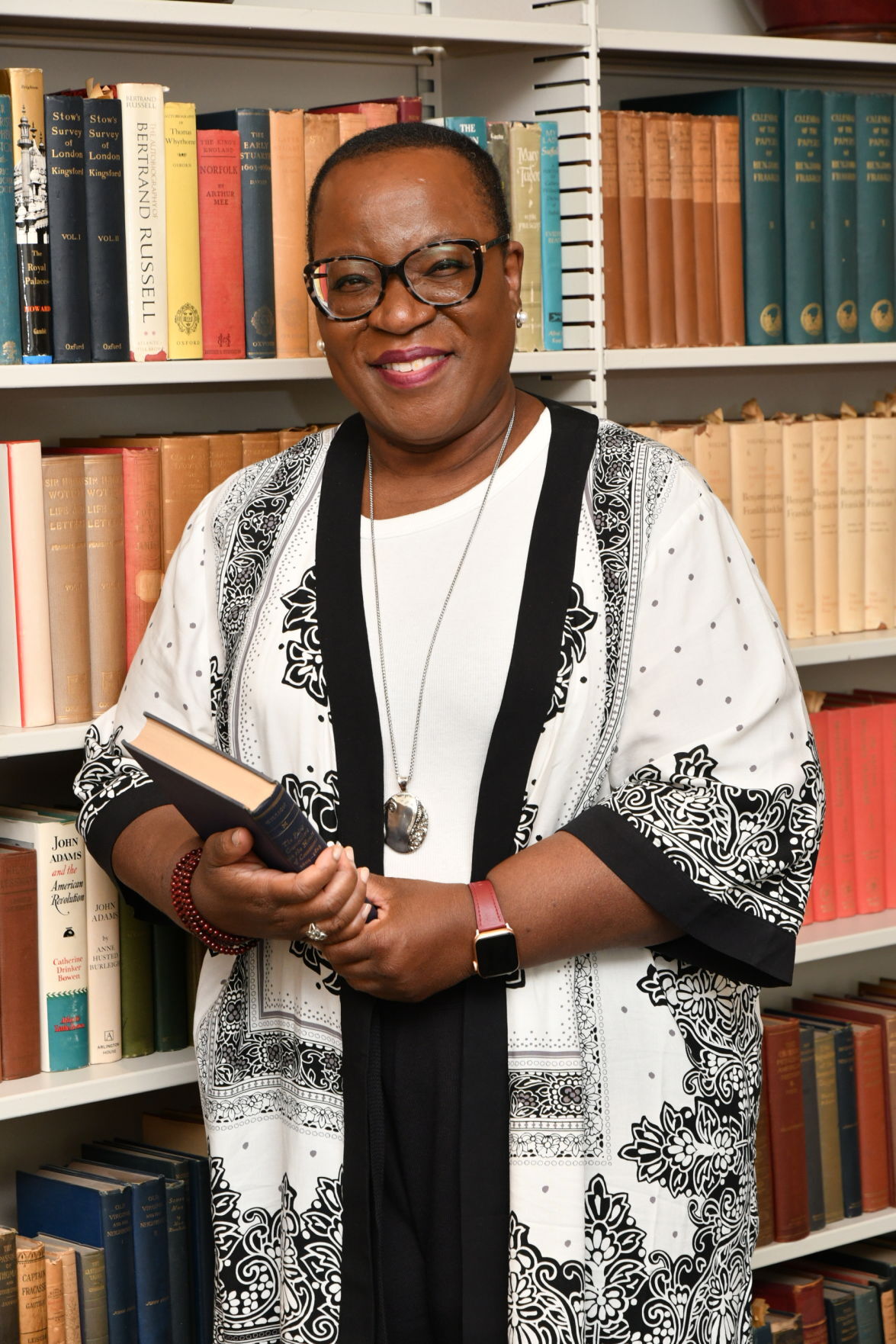 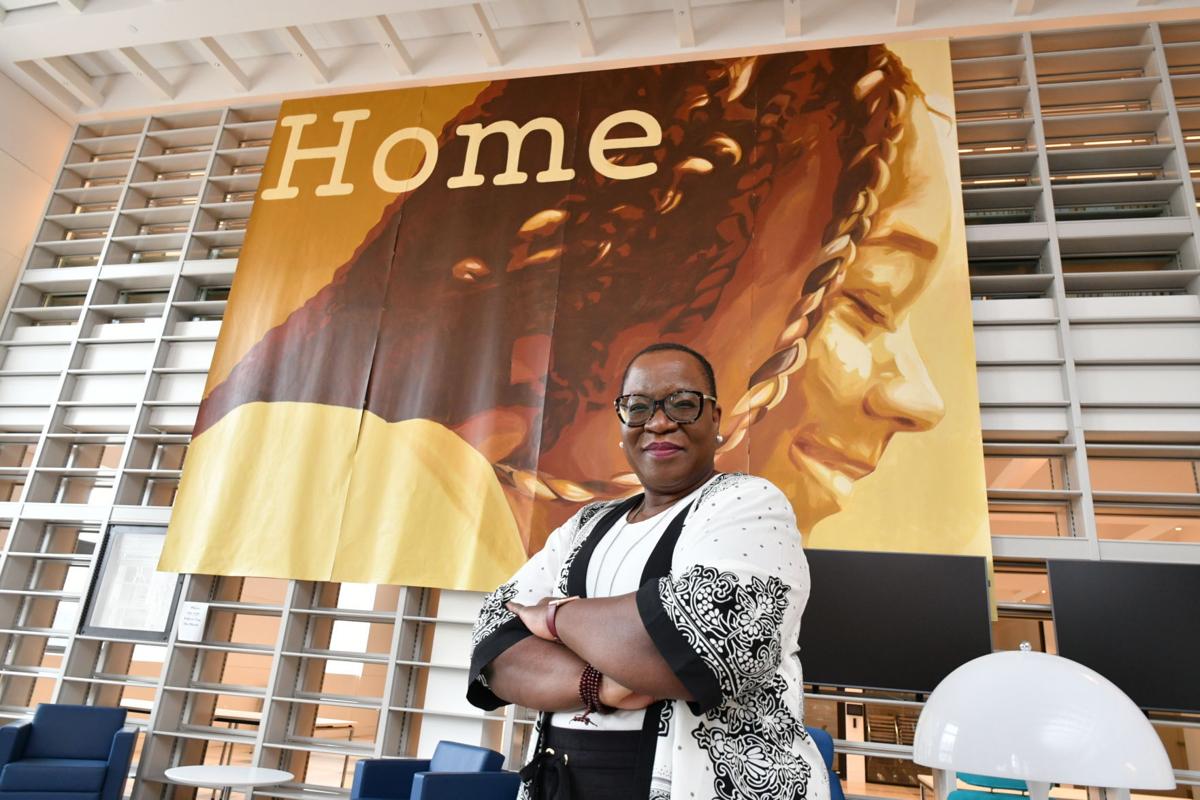 Folasade A. Olanipekun-Lewis, incoming chair of the Free Library of Philadelphia’s Board of Trustees, says “I’m excited about this opportunity.” She is pictured in the Heim Center at the Free Library on the Parkway.—TRIBUNE PHOTO/ABDUL R. SULAYMAN

Folasade A. Olanipekun-Lewis, incoming chair of the Free Library of Philadelphia’s Board of Trustees, says “I’m excited about this opportunity.” She is pictured in the Heim Center at the Free Library on the Parkway.—TRIBUNE PHOTO/ABDUL R. SULAYMAN

Since the vote took place in March, Olanipekun-Lewis has been working with the board officers to put together a framework for the institution.

“We had a rough year last year with the pandemic, with the social justice issues that have plagued the country, particularly in our cultural institution. What came to light were a number of inequities around race and justice at the library,” Olanipekun-Lewis said in an exclusive Philadelphia Tribune interview.

Olanipekun-Lewis and her team will be looking at diversity, equity and inclusion within these three pillars: Climate and Culture, Opportunity, and Leadership and Oversight. She said this will be the framework through which she will lead the board and serve the library. The Free Library staff totals 710, which includes full-time, part-time, and temp/seasonal employees.

As she looks at Climate and Culture, Olanipekun-Lewis said the board came to realize through their analysis that “we don’t fully understand how social identity, race, gender, and sexual orientation affect our staff and patrons every day through their interactions. We’ve learned that our staff had experienced incidents of bias and discrimination without clear, consistent, or effective reporting, investigation or judication.”

Those issues weakened relationships with their executive leadership and staff, she said.

Also Olanipekun-Lewis said the board is committing to the processes that allow them to operate with daily commitment to eliminate racial and social obstacles that may present before their staff, patrons, and communities.

Though it’s part of city government, the Board of Trustees governs all aspects of the Free Library, according to the City Charter.

“We want to support and embrace all staff and patrons regardless of race, gender, gender identification and sexual orientation. We are going to create a space for our Free Library of Philadelphia staff to be empowered and a collaborative partner in addressing unofficial racism under opportunities,” she said.

In 2019, the Free Library had over 6 million visitors to their 54 locations in the library system. It is the most widely used educational and cultural institution in Philadelphia.

The updated guidance from the Philadelphia Department of Public Health works in accordance with the Free Library’s reopening plan that began in January. The Free Library will continue to increase in-person services at neighborhood libraries over the coming months with a goal of resuming five days of service a week at libraries across the city in the next fiscal year.

All Free Library staff will have the opportunity for professional growth and advancement, Olanipekun-Lewis said, adding that the staff will reflect the communities they serve.

Under the Opportunity pillar, she said they learned through a survey and analysis that Black and brown employees had lower average annual salaries than their white colleagues, because she said, “you have more Black and brown folks in security jobs and lower-paying jobs than in what we call the classic white-collar jobs.”

As part of the board’s third and last pillar Leadership and Oversight, they will operate with a clear understanding of how the board of trustees and the board of directors will support the staff, patrons and communities, she said.

Olanipekun-Lewis said the board realized there was a disconnect with the Free Library staff.

“Our engagement as a board with the staff was very unclear. It came to light that we needed to do better engagement,” she said. “We also recognize that the board of trustees and the board of directors would benefit from a deeper understanding of how race and equity affect our staff and patrons. And we recognized that our executive leadership doesn’t reflect the patrons and communities we serve. The leadership was not reflective of the diverse communities that we serve.”

And also with the Leadership and Oversight pillar, Olanipekun-Lewis said the trustees and directors will actively support Free Library of Philadelphia efforts to reduce racial and social barriers for staff, patrons and community.

In her role for City Council, Olanipekun-Lewis said she enjoyed the ability to affect change, such as the support she gave the Council President Darrell Clarke and the 17 Council members, providing technical guidance around issues that they were considering that affected residents, was important for her.

“Tip O’Neill (a former U.S. House speaker) said that ‘all politics is local.’ I did not have the full appreciation of that until I started working with Council President Clarke, knowing that passing bills to prevent loitering and all types of things that affect the quality of life of our citizens, especially those that don’t have the type of representation that comes with wealth. We are providing that, and through his leadership, he was providing a platform for equity to present itself because all Philadelphians are being represented,” Olanipekun-Lewis said.

Olanipekun-Lewis worked on projects including the post-sale of PGW.

“Just being involved in these types of very consequential projects — consequential to the citizens of Philadelphia — was a pleasure. It was absolute joy,” she said. “Once I hit 50, I realized that the road behind me was longer than the road in front of me and the things I wanted to do with whatever remaining time that God allows me to be able to has to be meaningful.”

For Olanipekun-Lewis, she said serving the Free Library is one of the things that removes all barriers and obstacles.

“It presents a level playing field when its services are provided in a fair and equitable manner,” she said. “I’m excited about this opportunity because it reminds me of what I did when I was in City Council because we’re serving folks that may not otherwise have the resources that they would need to overcome things like poverty, homelessness and job challenges.”