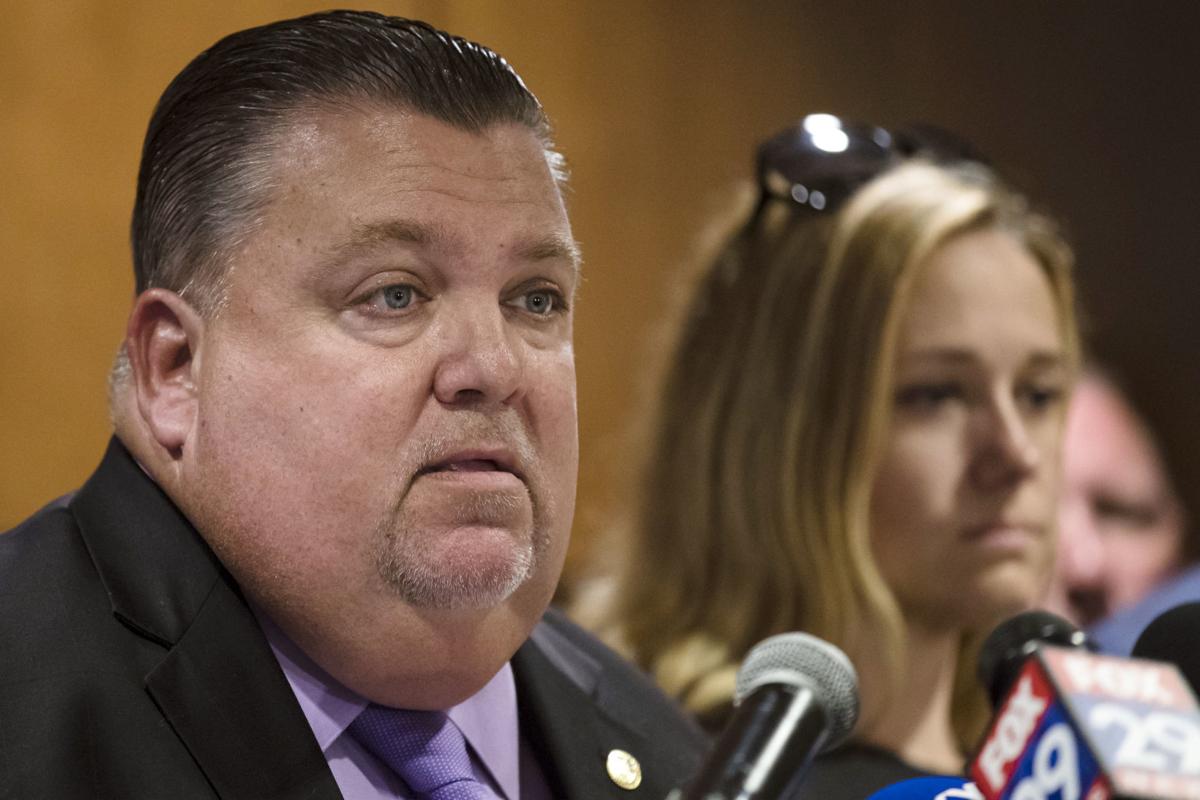 Fraternal Order of Police Lodge No. 5 President John McNesby defends former officer Ryan Pownall during a news conference in Philadelphia in 2018. Pownall, who is white, was charged with criminal homicide for fatally shooting a Black man in the back after a confrontation over a dirt bike. — AP Photo/Matt Rourke 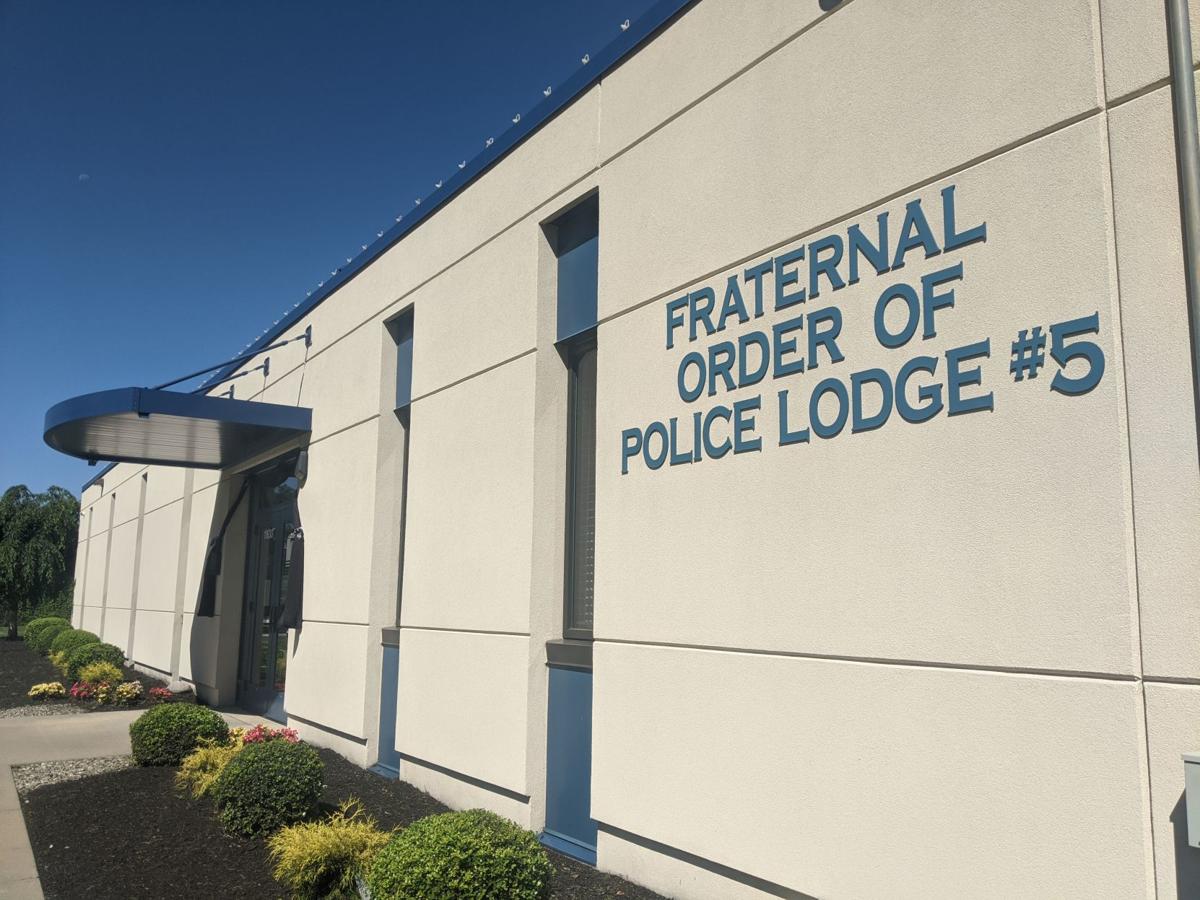 John McNesby, president of the Fraternal Order of Police Lodge No. 5, was not available for comment Friday at the union’s headquarters in Northeast Philadelphia. — Tribune Photo/Michael D’Onofrio

Fraternal Order of Police Lodge No. 5 President John McNesby defends former officer Ryan Pownall during a news conference in Philadelphia in 2018. Pownall, who is white, was charged with criminal homicide for fatally shooting a Black man in the back after a confrontation over a dirt bike. — AP Photo/Matt Rourke

John McNesby, president of the Fraternal Order of Police Lodge No. 5, was not available for comment Friday at the union’s headquarters in Northeast Philadelphia. — Tribune Photo/Michael D’Onofrio

Where is John McNesby?

The president of the Fraternal Order of Police Lodge No. 5, the union that represents the city’s 6,500 cops, has dodged questions in the past week as city officials have coalesced around a series of police reforms and budget cuts targeting the police department following weeks of city protests over the police killing of George Floyd, an unarmed Black man and father of two in Minneapolis.

On Friday morning, McNesby was not available at the FOP’s headquarters.

“Save yourself a trip, McNesby is NOT their [sic],” said police union spokesman Mike Neilon in an email responding to a request for comment.

No other police union officials were available for comment at the Northeast Philadelphia building, a receptionist told a reporter inside the building.

The leaders of two organizations that represent Black police officers in the city, meanwhile, have been more responsive to questions and supportive of some of the proposed changes.

Early in the week, Mayor Jim Kenney nixed his plans to boost the police budget by $19 million, and said he would hold spending levels at this year’s budget of $741 million. He did not rule out further cuts or layoffs as his administration and City Council hammer out a budget this month.

City Council on Thursday introduced a package of legislation that would establish a Citizens Police Oversight Commission, ban choke holds and other restrictive-breathing techniques used by officers, and make negotiations around the police union’s collective bargaining agreement more transparent.

Kenney said on Tuesday some of the reforms have already begun and those changes that can be accomplished through his office and City Council “will be done, I assume, sooner.”

Some reforms will have to be hashed out in union contract negotiations. Kenney extended the police union’s contract through June 30, 2021, after the coronavirus outbreak began in the city.

Reaction from the FOP

“We have no comment,” Neilon said in an email about the mayor’s proposed police reforms earlier in the week.

McNesby, who is typically quick to call a news conference or issue a news release to defend officers accused of abuse and wrongdoing or condemn detractors in colorful language, has been uncharacteristically quiet about the proposed reforms.

He has continued to defend officers accused of wrongdoing — but mostly on social media.

On Monday, McNesby accompanied Police Staff Inspector Joseph Bologna Jr. outside FOP headquarters as a crowd of union members cheered Bologna, who was on his way to surrender on charges of aggravated assault for allegedly beating a Temple University student with a baton during the protests, according to NBC 10 Philadelphia. McNesby did not answer questions from the press.

McNesby tweeted on June 5 that the FOP was “disgusted” over the arrest of Bologna and attacked District Attorney Larry Krasner for filing the charges. In another tweet, he called on members to buy FOP-made T-shirts that read, “BOLOGNA STRONG.”

“The FOP will vigorously defend Bologna against these baseless allegations and charges,” McNesby tweeted.

Many active Black officers in the Guardian Civic League feel they have been “getting lumped into one group” with the FOP and they “do not all agree with [the FOP’s] endorsements and opinions,” said league President Crystal Coleman Williams.

Williams supported some reforms to the department, including the proposals to create the oversight commission, outfit all officers with body cameras, and offer more training.

“I’m glad that they’re looking at it and I’m glad they are looking at doing reforms because policy does need to be changed in that area,” Williams said.

“This is what the police department needs.”

But Williams stopped short of backing funding cuts to the police department, saying reforms and increasing accountability require more funding to accomplish. Officials should not raid the police department’s budget to pay for programs for social issues, including mental health services, that officers are now tasked to address, she said.

“[Police officers] need a lot of stuff out there that they need to reduce these incidents all over the country and that takes money,” said Williams, a former Philadelphia police officer who spent more than 30 years on the force.

Indiscriminately slashing police budgets also could potentially lead to layoffs of officers of color, who already make up a smaller portion of the police ranks, said Charles Wilson, who heads the National Association of Black Law Enforcement Officers.

Wilson supported reallocating some current police funding to programs and services to address issues that police are not equipped to handle.

“If they’re looking to reallocate funds and resources to other areas that would be more appropriate to provide service and assistance to the community, that might be a good thing,” Wilson said.

Overall, Wilson said police reforms were needed to change a culture of law enforcement that allowed a white Minneapolis police officer to kneel on Floyd’s neck for nearly nine minutes.

“The profession has to undergo reform,” he said.

Cuts to the Philadelphia Police Department’s budget will lead to layoffs and snuff out investments in police accountability reforms, the city’…

Independent investigation to probe Philadelphia police tactics, use of force against protesters

Philadelphia City Council has teed up a $4.9 billion city budget that would cut current police spending by $14 million and boost funding for a…

City Council passes police reforms, shelves others for the summer

Philadelphia City Council approved four police reforms on Thursday but left others shelved for the summer.

As city and state leaders rush to enact police reforms, the head of Philadelphia’s police union says he has worked behind the scenes to lobby …