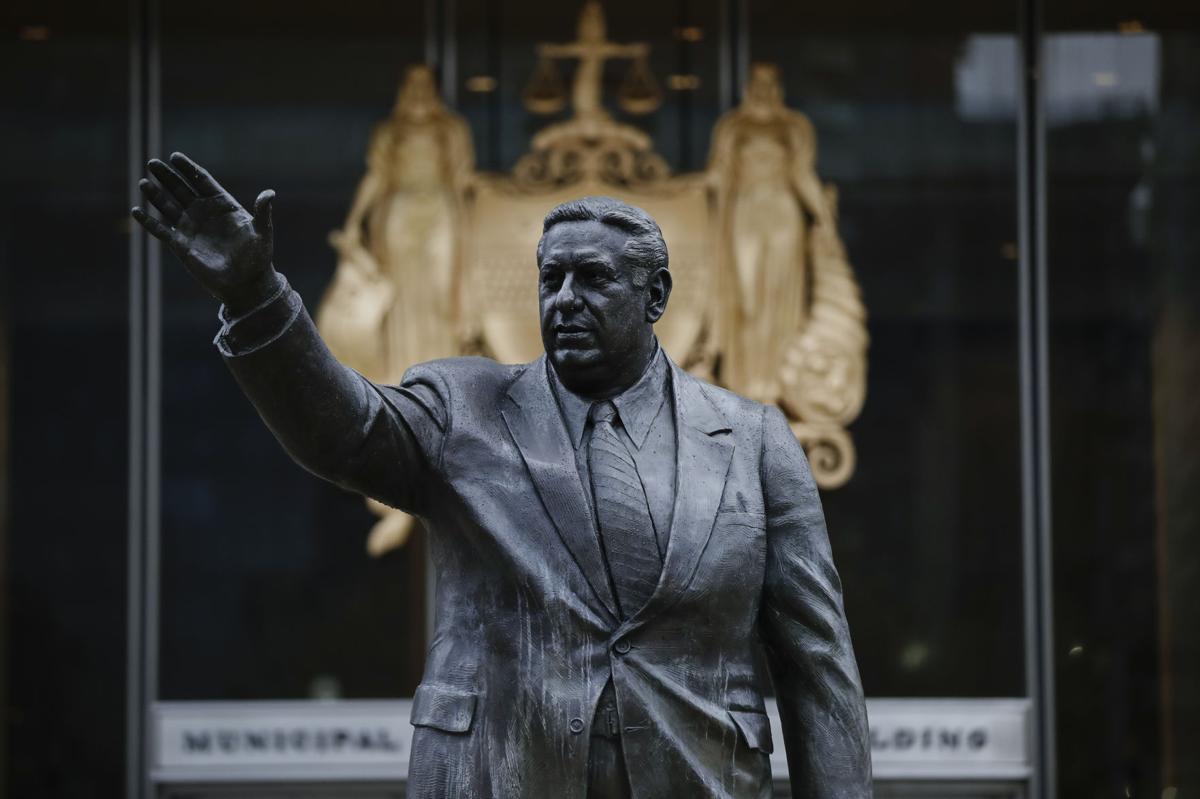 Shown is a statue of the late Philadelphia Mayor Frank Rizzo, who also served as the city’s police commissioner outside the Municipal Services Building in Philadelphia. 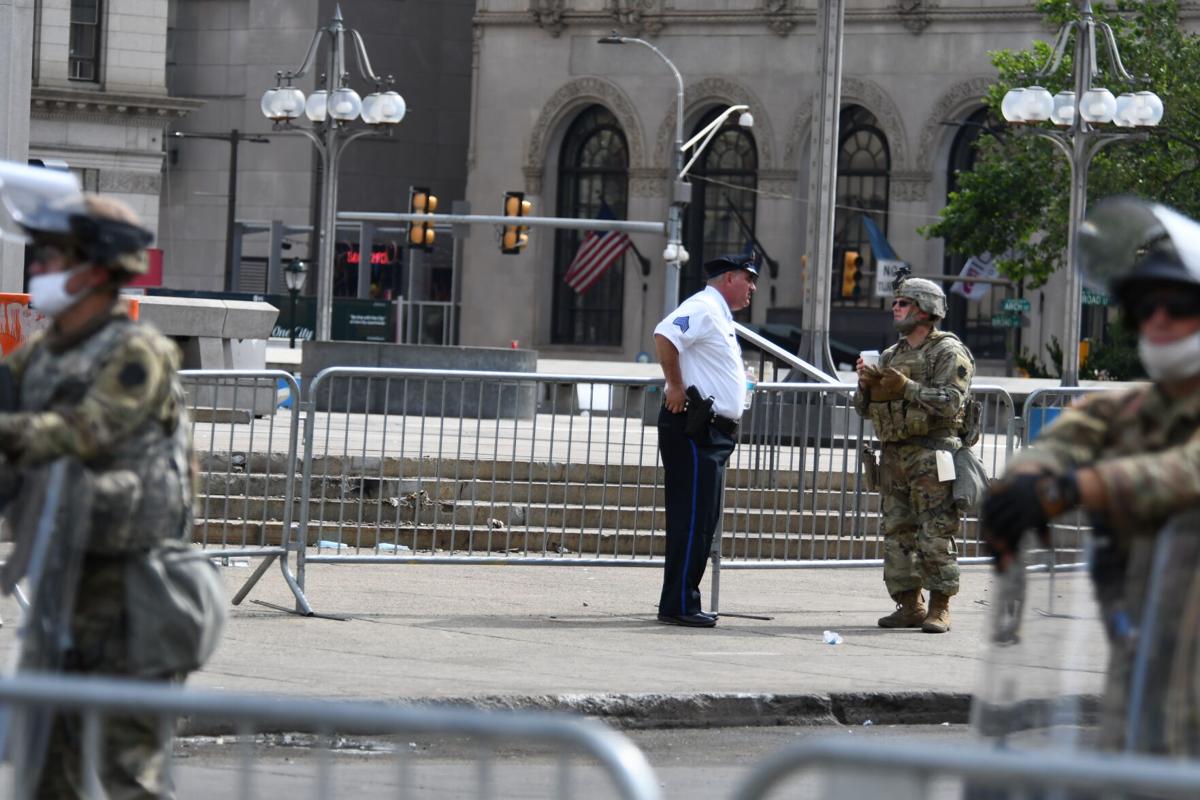 Shown is a statue of the late Philadelphia Mayor Frank Rizzo, who also served as the city’s police commissioner outside the Municipal Services Building in Philadelphia.

Workers early Wednesday removed the statue of controversial former Philadelphia Mayor Frank Rizzo, which was recently defaced during a protest for George Floyd.

As National Guard troops deployed in the wake of recent protests watched, a crane lifted the 10-foot-tall bronze statue and workers shook it from its stand outside the Municipal Services Building, across from City Hall. It was loaded onto the back of a truck.

“We needed to get it to a place where it was out of people’s sight," Mayor Jim Kenney said during a news conference Wednesday morning. "I know some people think of him as a hero, but there are a large number of people in the city who would go to the municipal building to pay their taxes, get permits and to do things and this guy, who was offensive to them, was above them while they did that. On many different levels, we needed to have him move on. In hindsight, I wish we had done it earlier."

Kenney said removing the statue is the beginning of the healing process for the city.

“But taking the monument down is not the be all or end all of where we need to go," he said. "We have a long way to go and I think the protests over the last week have shown the anger and the stress that people of color have in this country. That statue is representative of that. It had to go away in order for us to understand where we needed to go moving forward."

Community leaders praised the removal of the statue, but said more needs to be done.

“The symbol of hate, bigotry and police brutality, the Frank Rizzo Statue is now gone! Finally!!!!!" state Rep. Jordan Harris said on Twitter. "BUT NOW let’s remove the policies that still perpetuate police brutality and inequity in our community. Symbols matter but now is the time to keep pushing to address the Substance!”

Will Mega, member of the Human Rights Coalition 215, said the point of his group's protests wasn't just to focus on the Rizzo statue.

"It was also to also focus on having the government, the mayor, and the city change some things policy wise to address systemic racism, police, police brutality, misconduct, and also reinvesting into disenfranchised Black communities in poor people's communities. The next thing on our list is to end stop-and-frisk."

Mega said his group plans to keep an eye on the city's budget hearings and plans for funding the Philadelphia Police Department.

Mike Africa Jr., of MOVE, said in a written statement that officials also need to release from prison people who are incarcerated wrongly or for too long because of Rizzo's policies.

"There are people that were protesting against Rizzo in the 70’s and 80’s that are still in prison today. Russell Maroon Shoats, Joseph Bowen and Mumia Abu Jamal to name a few," Africa said. "How can you recognize that people were treated unfairly and remove a statue without removing the prison sentences that came from the unfair treatment? In Mumia’s case there is much evidence that proves his innocence. Eye witnesses, a confession from the real killer, 15 of the 35 investigative policemen brought up on corruption charges, the prosecuting attorney disbarred for prosecutorial misconduct… yet Mumia remains in prison for almost 39 years. Mumia has been in prison for so long that his children who were in elementary school when he was arrested are now grandparents."

His supporters believed he was tough on crime. But Africa noted that Rizzo's "hatred and bigotry is well documented."

"Rizzo's police department, mayoral administration and Rizzo personally faced dozens of lawsuits for physical abuse, assaults, systemic discrimination and harassment culminating in Philadelphia's first ever mayoral recall effort," Africa said. "Rizzo was not ashamed of his fascism, he was proud of it."

The city installed the statue honoring Rizzo on the steps of the Municipal Services Building in 1999.

Over the years, it has frequently been targeted by vandals. Many in the community had called for its removal, and launched a focused campaign in 2017.

Kenney had pledged to move the statue to Thomas Paine Plaza in 2018, but then pushed back the date to the summer of 2021 because the renovations of the plaza were delayed.

“That choice was a mistake — we prioritized efficiency over full recognition of what this statue represented to Black Philadelphians and members of other marginalized communities," Kenney said in a written statement issued early Wednesday. "The continued display of the statue has understandably enraged and hurt many Philadelphians, including those protesting the heinous murders of George Floyd and too many others. I have seen and heard their anguish."

On Saturday, protesters covered the statue with graffiti, set fires at its base and attempted to topple it. City cleaning crews washed off the statue early Sunday and several dozen police officers guarded it throughout the day, further angering protesters. Kenney pledged then to remove it "within the month."

But then on Tuesday, the mayor signed an order directing the city's managing director to remove the statue immediately.

The statue will be placed in secure storage by the Department of Public Property until a plan is developed to donate, relocate or otherwise dispose of it, the mayor said in the statement. City officials have not established a timeline for developing the plan. If and when it is developed, the plan will be presented to the Philadelphia Art Commission for approval.

Thousands of protesters descended upon City Hall, the Philadelphia Museum of Art, and the Municipal Services Building decrying the killing of …

The massive statue of former Police Commissioner and Mayor Frank Rizzo will not move until the first quarter of 2022 — not 2021, as originally…

PHILADELPHIA — Police are investigating after someone vandalized the statue of former Philadelphia Mayor Frank Rizzo.

The Kenney administration has readjusted the timeline for relocating the larger-than-life statue of Frank Rizzo yet again.

Some of the last vestiges of the Rizzo name are disappearing from the Philadelphia landscape.