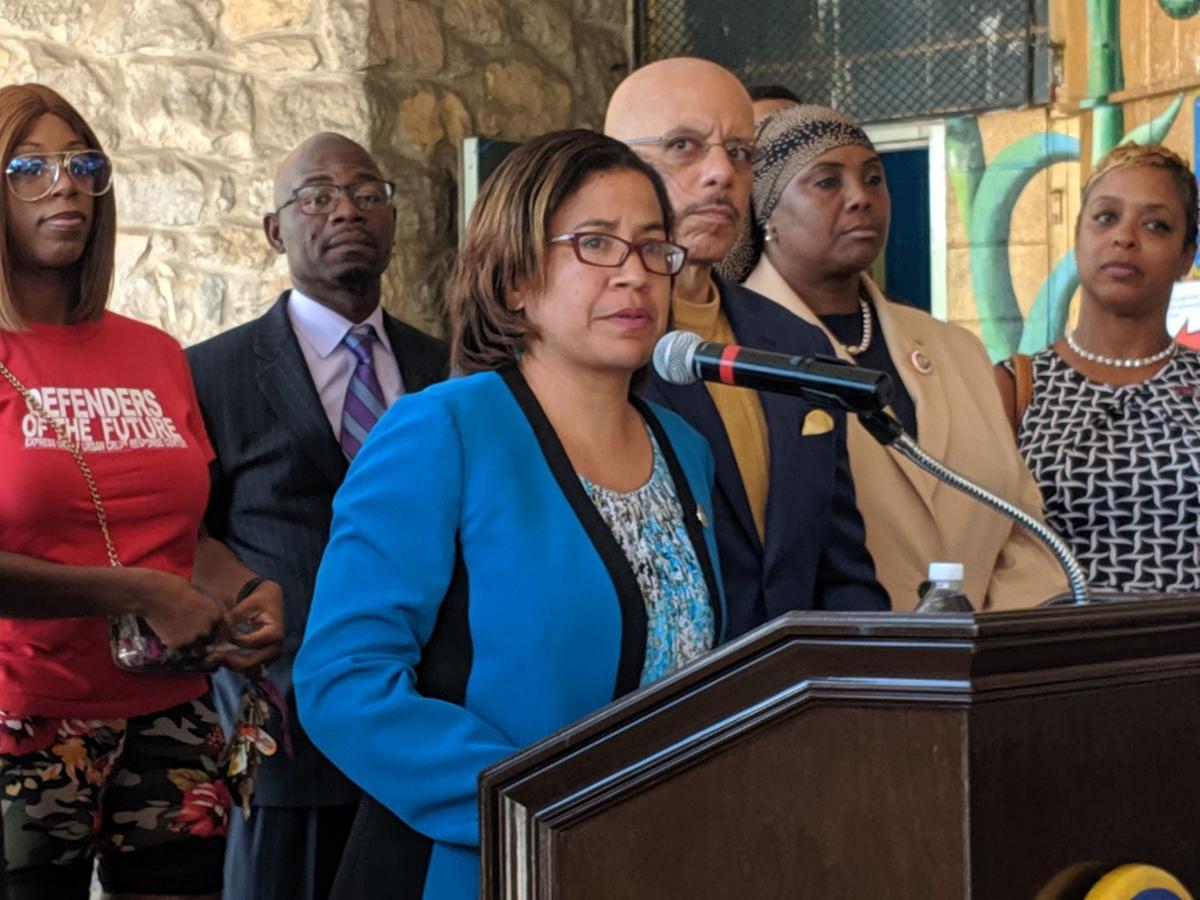 State Rep. Donna Bullock said she and other members of the Philadelphia delegation planned to draft a bill to enable the city to enact gun-control legislation. - PHILADELPHIA TRIBUNE PHOTO/MICHAEL D'ONOFRIO 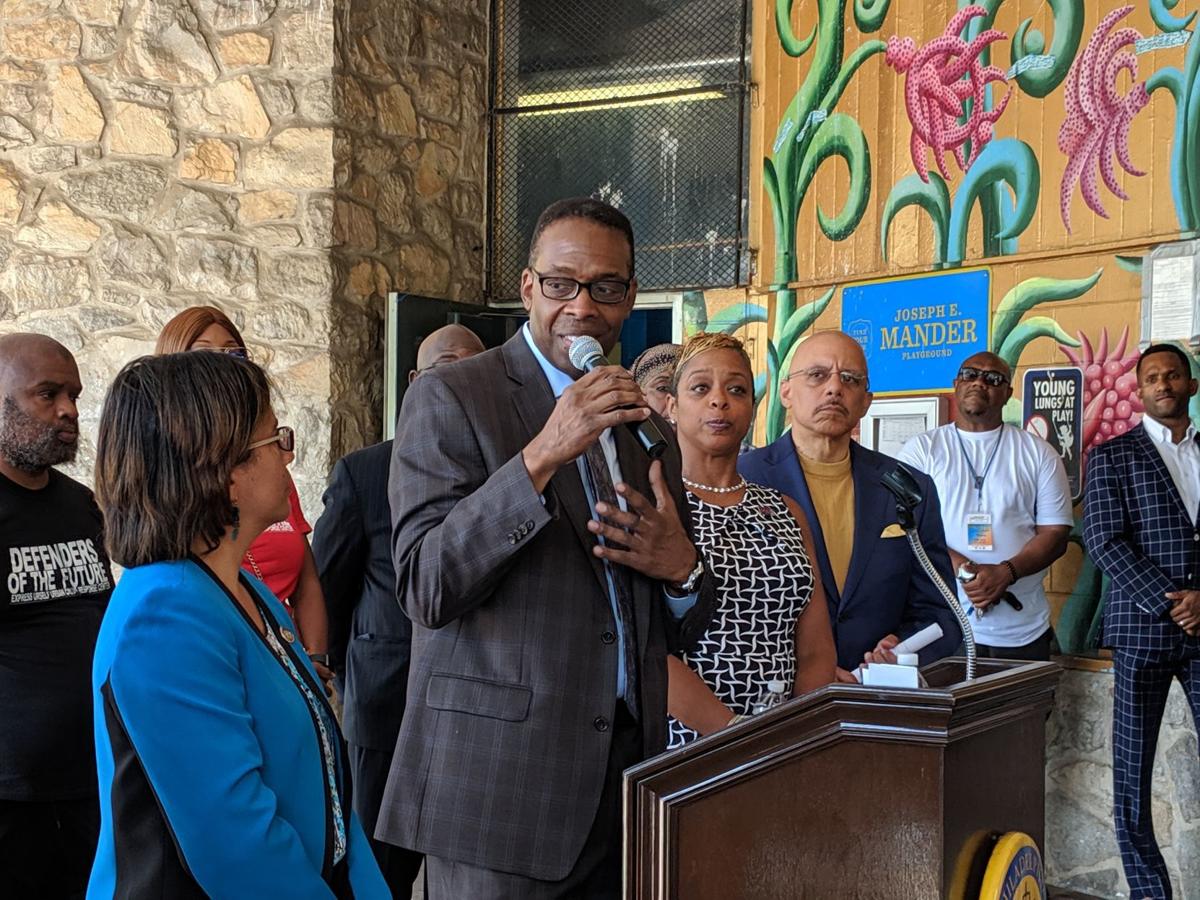 State Rep. Donna Bullock said she and other members of the Philadelphia delegation planned to draft a bill to enable the city to enact gun-control legislation. - PHILADELPHIA TRIBUNE PHOTO/MICHAEL D'ONOFRIO

City Council will take another shot at banning firearms in some public spaces.

Local and state officials plan to join forces to introduce gun-control legislation in the coming months that would outlaw firearms and other weapons in the city’s recreation centers.

“We are basically, in some sense, in a state of emergency as it relates to safety in our community,” said City Council President Darrell Clarke while flanked by officials and community activists on Wednesday at the Joseph E. Mander Playground's recreation center in the Strawberry Mansion neighborhood.

“It’s clearly time we do something,” he added.

The urgency comes after several shootings at city playgrounds. In June, a shooting killed one person and wounded five others during a graduation party at Finnegan Playground in Southwest Philadelphia. Earlier this month, seven people were shot during a basketball tournament at Baker Playground in the Overbrook neighborhood.

In 2018, two murders were committed at city recreation centers, as well as 526 crimes, including 18 gun crimes.

Clarke said the Council would put forth legislation in the fall to prohibit both concealed and openly carried weapons from being brought inside or within 25 feet of a city-owned recreation center. Fines would max out at $2,000 and 90 days in jail.

Members of the City Council are on summer break until Sept. 12.

The city passed similar legislation in 2013. However, the state's "pre-emption”  law prohibits local governments from regulating firearms. So the city needs legislators in Harrisburg to sign off on any gun-control measure.

The 2013 ordinance that prohibits guns and deadly weapons from city-owned facilities remains on the books but unenforced. Under state law, guns are prohibited from court facilities, which includes City Hall and the Juanita Kidd Stout Center for Criminal Justice. Guards, X-ray machines and metal detectors greet visitors at the entrances to these facilities.

Asked how the city would enforce a no-gun policy at public parks and recreation centers, Clarke responded: “We’re going to enforce it the same way we enforce [it at] City Hall.”

But he added, “Lord knows I don’t want to have metal detectors at a rec center, because that sends the wrong signal.”

Clarke said he was “very optimistic” about the pending go-around for a local gun-control measure because — unlike last time — the city has buy-in from Democratic state legislators.

State Rep. Donna Bullock (D-195) said lawmakers were drafting a companion bill to enable the city to enact gun-control legislation. The next scheduled session for the state House of Representatives starts in September.

Asked whether state Democrats will succeed in allowing Philadelphia to overcome Pennsylvania's pre-emption law, state Sen. Vincent Hughes said, “We are obligated to force the issue.”

While Democrats make up nearly all of Philadelphia’s state delegation in Harrisburg, Republicans control both the House and Senate, which have previously balked at passing any gun-control proposal.

Mike Straub, spokesman for the House GOP, noted that Philadelphia was taking a “different approach” by working with state officials, but declined to comment on the merits of its effort until a proposal was introduced to the legislature.

Straub expected pushback from Republicans in both chambers to any sort of firearm regulations proposed at the local level, but said discussions about reducing gun violence across the state continue.

“Initially, there’s going to be some opposition because the state court consistently has ruled against local gun ordinances,” he said.

Tuesday’s announcement comes as Philadelphia homicides are on track to surpass 2018, which was a 10-year high. Through Tuesday, the city has logged 182 homicides, up 6% from last year, and 757 shootings. Black men were the victims in three out of every four shootings and homicides so far this year.

The revived attempt at passing a local gun-control measure brought little comfort to residents Jade Garner, 32, and Latonya Thomas, 52, who stood together in at the playground in Strawberry Mansion while school-aged children played soccer behind them.

Garner suggested that elected officials should go into communities and directly talk with young, African-American men who were at risk of gun violence.

“No, it won’t make a difference,” Garner said about the planned legislation. “They’re going to still bring the guns. Incidents happened in this park before. They’re still going to happen.”

“[Officials] need to talk to the young people where the violence is happening,” Thomas added. “[The young men] don’t hear them. No representative of them is here.”

When a shooting or homicide occurs in Philadelphia, more often than not a Black man is the victim.

Michael Garvey reached up and pulled down a six-shot revolver hanging on a wall among hundreds of other guns.

After he buried his son on Monday, Sultan Ashley-Shah called on city officials to do more to halt the gun violence affecting African-American …

A pair of Philadelphia bills that aim to regulate firearms might have wide support in the city, but state legislators in Harrisburg will have …

Philadelphia’s state delegation has stumbled once again in Harrisburg to successfully back the city’s efforts to enforce its own gun regulations.

In the midst of a gun violence crisis and surging homicides overwhelming Black Philadelphians, elected officials and police brass say now is t…