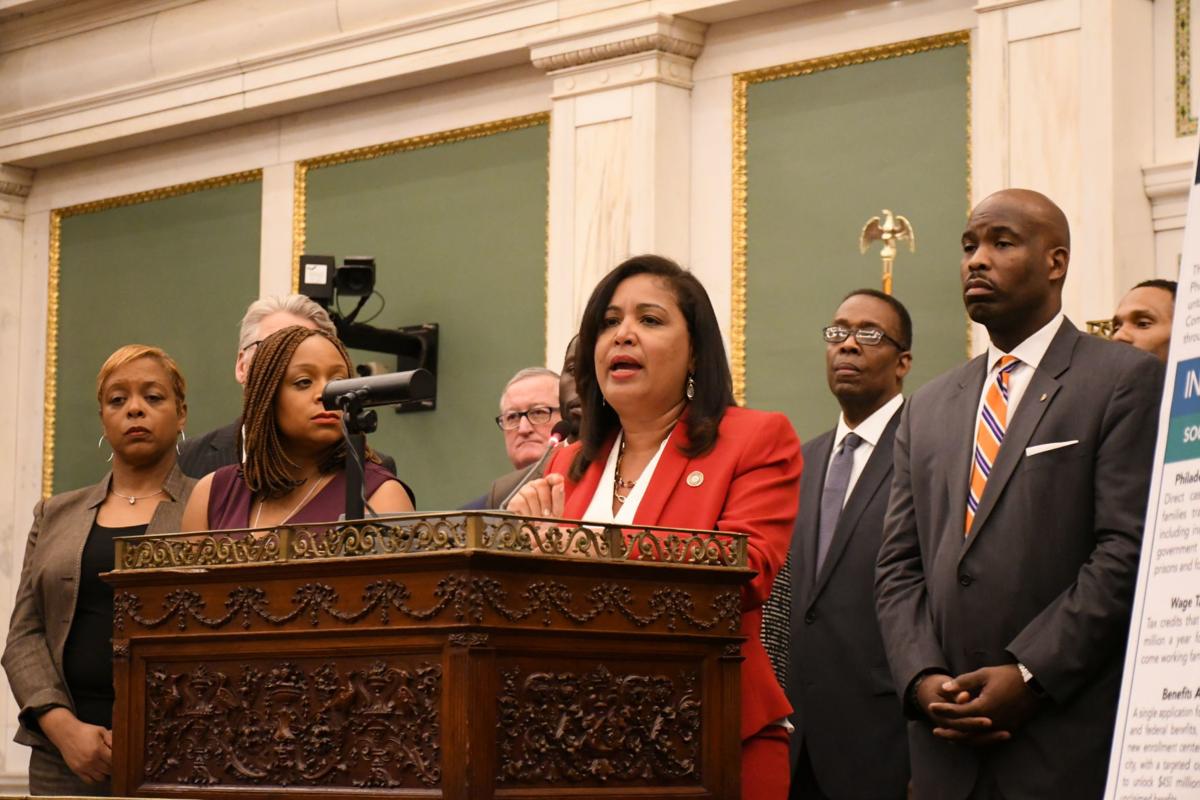 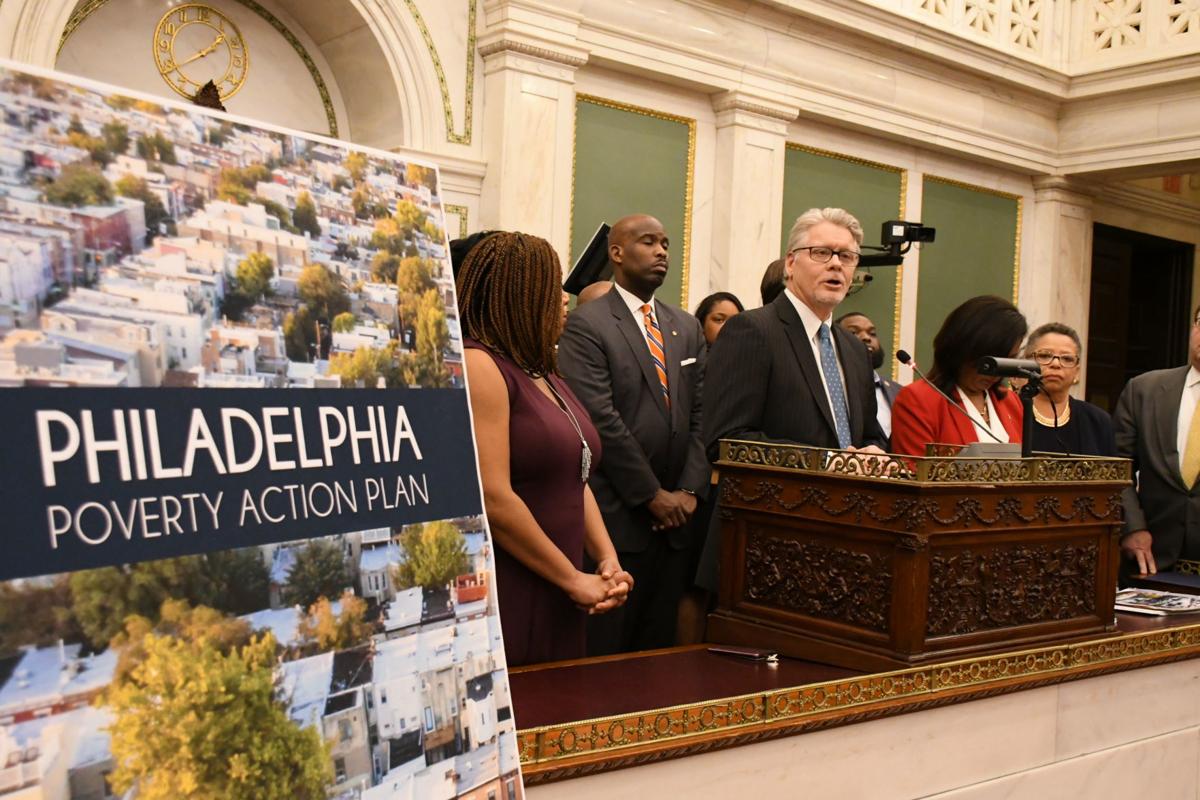 The business community will 'remain committed to this process in the years to come,' says President of the Greater Philadelphia Chamber of Commerce Rob Wonderling, center. — Tribune Photo/Abdul R. Sulayman 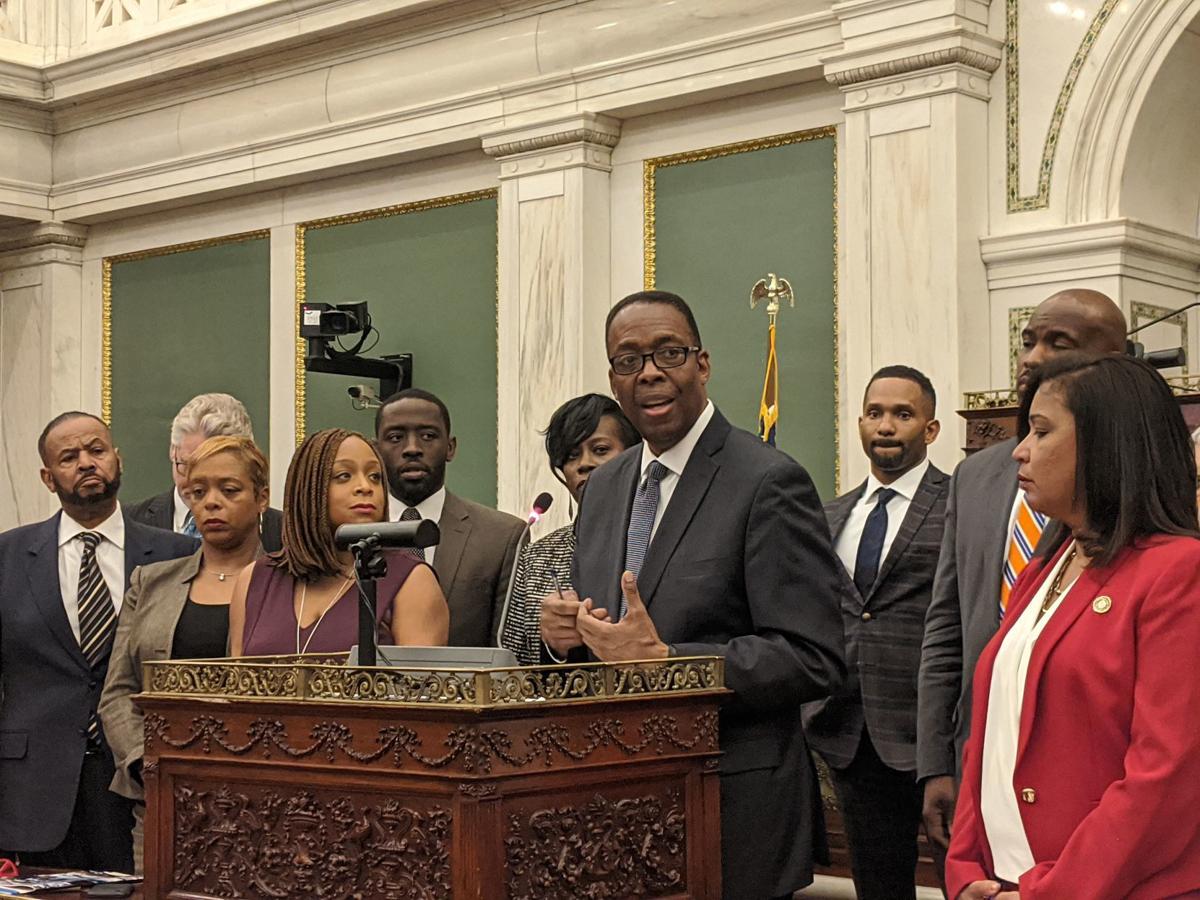 Inside the City Council Chambers on Tuesday, Council President Darrell Clarke, center, unveils a new plan aimed at pulling 100,000 residents out of poverty by 2024. He is flanked by city leaders and stakeholders. — Tribune Photo/Michael D'Onofrio

The business community will 'remain committed to this process in the years to come,' says President of the Greater Philadelphia Chamber of Commerce Rob Wonderling, center. — Tribune Photo/Abdul R. Sulayman

Inside the City Council Chambers on Tuesday, Council President Darrell Clarke, center, unveils a new plan aimed at pulling 100,000 residents out of poverty by 2024. He is flanked by city leaders and stakeholders. — Tribune Photo/Michael D'Onofrio

Philadelphia officials have unveiled a comprehensive plan aimed at slashing poverty in the city by 20% by 2024 but questions remain about costs and achievability.

City Council, Mayor Jim Kenney and stakeholders laid out the 14-page policy proposal that made up the Philadelphia Poverty Action Plan — which focused on expanding access to the social safety net, housing, jobs and education — on Tuesday inside City Hall.

The goal was to reduce the city’s 24.5% poverty rate and pull 100,000 residents out of poverty over four years.

But details were notably absent.

Council President Darrell Clarke sidestepped questions about the cost of carrying out the policies during the news conference, saying details would be revealed during the mayor’s budget proposal on Thursday and forthcoming budget hearings.

“Do we have a sense of how much money we will need in some of this? Absolutely,” Clarke said, adding, “Stay tuned. There will be some dollar figures attached.”

The council president hinted that council might dip into the city’s fund balance, or surplus, to pay for some of the plan ($438.6 million last year) and that low-income residents were missing out on an estimated $450 million in existing services and benefits because they don’t opt-in.

The list of policy proposals left Jamila Harris-Morrison, executive director of the anti-poverty nonprofit ACHIEVEability, who had not seen the full plan, “cautiously optimistic.”

Harris-Morrison applauded its general framework but questioned the lack of fiscal details and its likelihood of success in such a short period of time.

“I’m happy to see the city has unveiled a bold plan but remain cautiously optimistic as the number of 20% is quite aggressive,” she said in a telephone interview. “It’s not clear whether that’s been achieved in any other community in our country.

“I’d like to see more details around the financial resources that are going to be provided to meet all the commitments outlined in the plan,” she added. “But if there’s no financial resources and no accountability then we’ll just have another plan sitting on the shelf.”

Officials did not appear prepared to talk about the proposals in detail.

Asked for specifics about the basic income proposal, including who would qualify, Councilwoman Maria Quiñones-Sánchez, who led the special committee, said, “We haven’t worked those details [out]. We have some ideas; that’s part of the implementation process.”

Quiñones-Sánchez added the group tapped successful strategies in other cities and that city government needed the business community and other city institutions to step up, specifically calling out the University of Pennsylvania, and Drexel and Temple universities.

“What makes this different is we’re going to hold everybody to a higher standard,” she said, adding, “Government can never do this alone.”

Sharmain Matlock-Turner, president of the Urban Affairs Coalition and member of the special committee, encouraged stakeholders to overcome differences and challenges to bring about the policy proposals.

“We must implement this. We must drive this change,” she said. “In four years, we want to see the results of this hard work.”

Rob Wonderling, president of the Chamber of Commerce for Greater Philadelphia, said the business community will “remain committed to this process in the years to come.”

The action plan builds on the report City Council issued in 2019 and anti-poverty legislation passed in previous years, which included establishing new protections for some tenants and workers, and providing more funding for the Housing Trust Fund.

Mayor to propose $5.2B spending plan

Mayor Jim Kenney proposed a $5.2 billion spending plan without a tax hike as he laid out his priorities on Thursday.