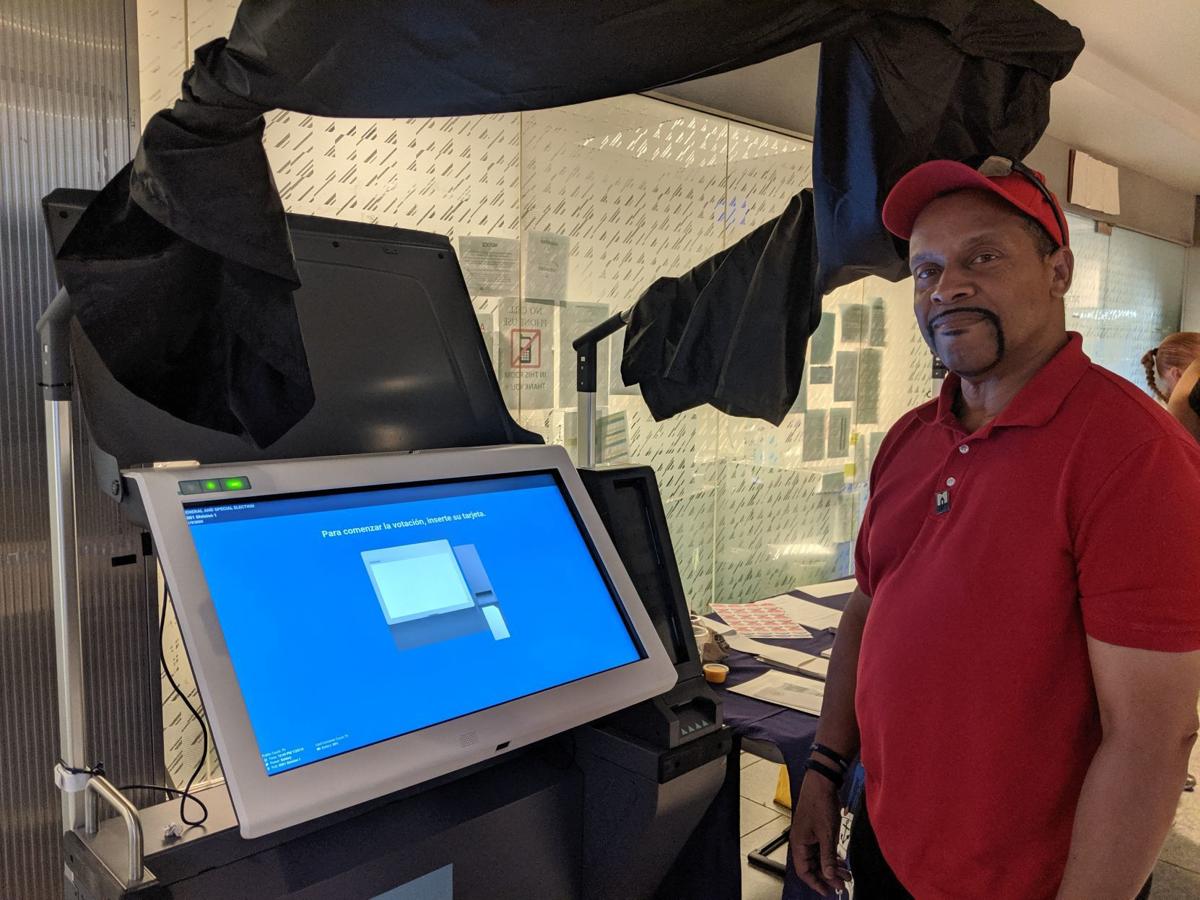 Kent Marshall of Southwest Philadelphia approved of the simplified system that leaves a ‘paper trail’ and accommodates those with disabilities. 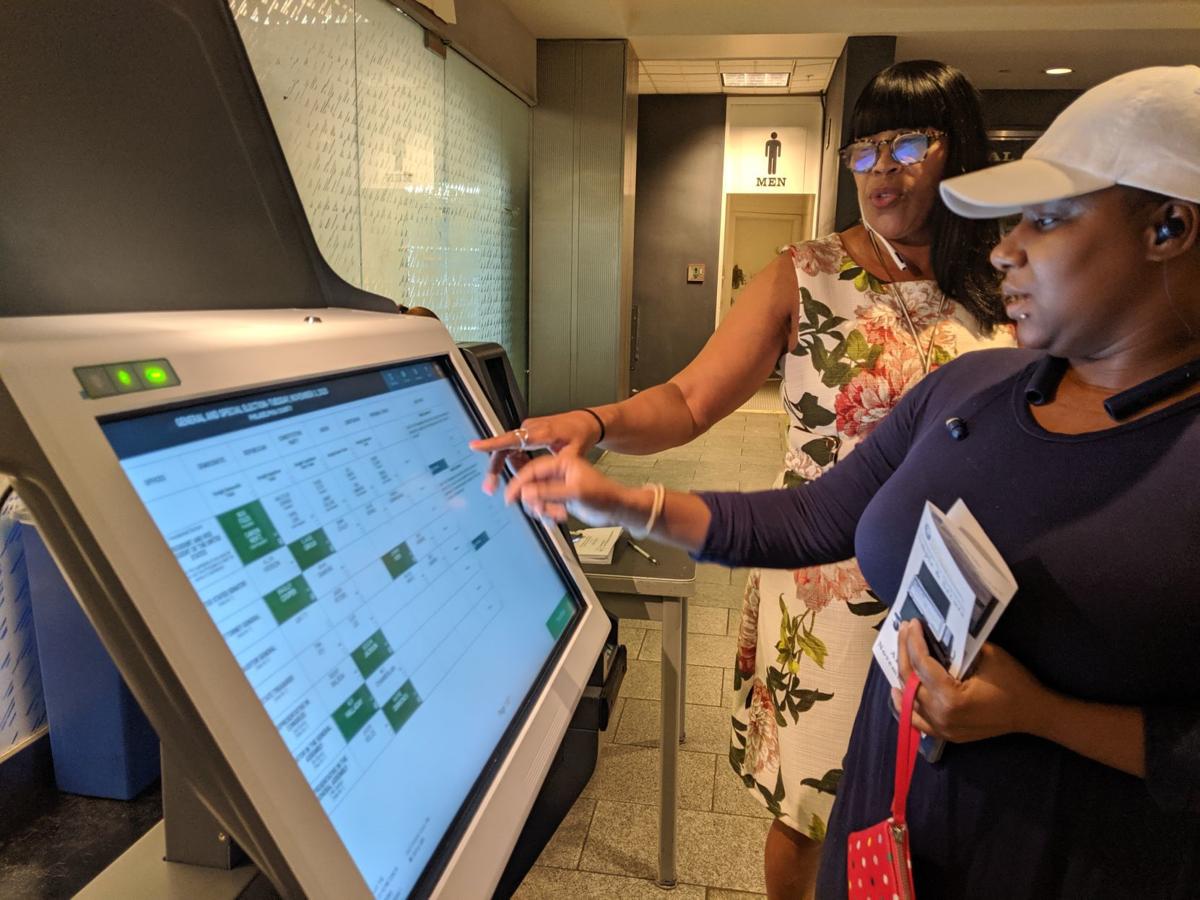 From left to right, Corinthia Johnson, an employee with the Office of the City Commissioners, shows resident Latasha Foster how the new voting machines operate in the concourse of the Municipal Services Building in July.

Kent Marshall of Southwest Philadelphia approved of the simplified system that leaves a ‘paper trail’ and accommodates those with disabilities.

From left to right, Corinthia Johnson, an employee with the Office of the City Commissioners, shows resident Latasha Foster how the new voting machines operate in the concourse of the Municipal Services Building in July.

As Philadelphia upgrades to a new voting system for the November election, Castoria Moore had little love for the outgoing machines.

“That was kind of a dinosaur that’s been around for a real long time,” said the 62-year-old West Philadelphia resident about the old system.

Moore was among the passersby who took the new voting system for a test run on Monday in the concourse of the Municipal Services Building where employees from the Philadelphia City Commissioners Office set up two machines.

The modern machines — called ballot marking devices — and polling books will replace the current system that has been in place since 2002, said Nick Custodio, deputy commissioner under City Commissioner Chairwoman Lisa Deeley, inside the city’s voter registration office on North Columbus Boulevard.

The City Commissioners approved the procurement of the ExpressVote XL system from Election Systems & Software LLC and electronic poll books from KNOWiNK in February. The city has set aside $22 million this year for the system, which expected to cost between $50 and $60 million over 10 years, Custodio said.

Even though the City Controller’s office and the state auditor general are investigating the procurement process, the city has done more than 120 demonstrations in the last few weeks and has 145 more scheduled.

Philadelphia will put in place the new technology a year before Gov. Tom Wolf’s mandated deadline for all counties to upgrade their voting systems in order to provide a paper record of votes cast. Pennsylvania was one of 21 states targeted ahead of the 2016 election by Russian government operatives.

In July, Wolf announced he was working on a plan for the state to issue $90 million in bonds to cover 60% of the costs counties incur for replacing their voting machines.

The ExpressVote XL interactive machines feature 32-inch adjustable touch screens in a self-contained system that stores the ballots after they are cast.

Voters can choose to see ballots in English or Spanish. The machines display all the offices and candidates names on a single screen, and allow users to enlarge text or change the contrast on the screen.

The machines are compliant with the American With Disabilities Act, offering a range of accommodations, including an accessible keypad equipped with Braille and the ability to use a sip-and-puff device to make a selection.

Each machine prints a paper ballot with candidates’ names, which allows voters to verify their vote before it is cast. Voters can reprint their ballots up to three times before they cast them, Custodio said.

The paper ballots also create a paper trail in case of a hand recount, Custodio said.

As far as security concerns, Custido said, the voting machines are not connected to the internet and were certified by the state.

In the concourse of the Municipal Services Building, the new machines got high marks from some.

Kent Marshall, of Southwest Philadelphia, approved of the simplified system that leaves a “paper trail” and accommodates those with disabilities.

Latasha Foster, 34, of North Philadelphia, said the new system was convenient, more interactive and should appeal to younger voters, but she had lingering questions about securing the vote.

“Some people find a way,” she said. “It’s hackable, no matter what you say. Somebody can do something.”

Traditional paper poll books are also a thing of the past. In November, a poll worker will check a resident’s voting status on an iPad tablet, which the resident will then sign on the screen.

The electronic poll book, or “poll pads,” will contain the voting information for all registered voters. If a voter goes to the incorrect polling location, a poll worker will be able to tell him or her the correct location, Custodio said.

The Office of the City Commissioners will continue to take requests to demonstrate the voting machines throughout Philadelphia in an effort to introduce the new technology to voters. You can visit http://bit.ly/PHLVotesDemos to see if a demonstration is scheduled near you.

Philadelphia City Commissioners approved a new voting system in the face of objections about costs, transparency, and favoritism from a city o…

HARRISBURG — Pennsylvanians who will not be able to vote in person this fall can apply online for absentee ballots for the first time, officia…

A Nebraska-based voting machine company spent six years and more than $425,000 lobbying city officials before it was awarded a $29 million contract.

These machines haven't been paid for and they may never be paid for, depending on the City Controller's investigation and other factors. Meanwhile the Commissioners are spending our tax dollars on these demonstrations to convince the public that this is a done deal. The question is why the Commissioners are so desperate to spend $15-20 million extra on these particular machines, considering that they give voters the least assurance that their votes will be counted correctly, and will be the most expensive to store and move. Visit Protect Our Vote Philly (povphilly.org) for more info.