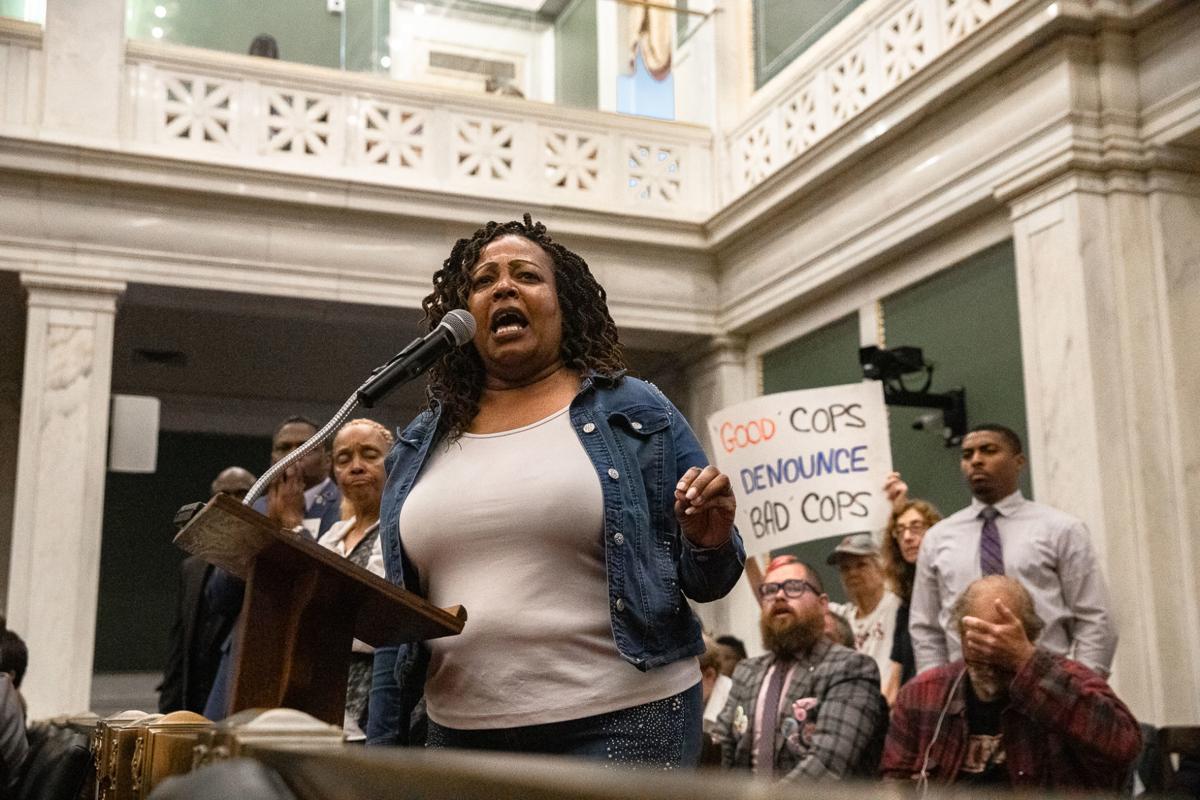 Rochelle Bilal, president of the Guardian Civic League, speaking at City Hall in this file photo from 2019. — COURTESY OF PHILADELPHIA CITY COUNCIL/JARED PIPER 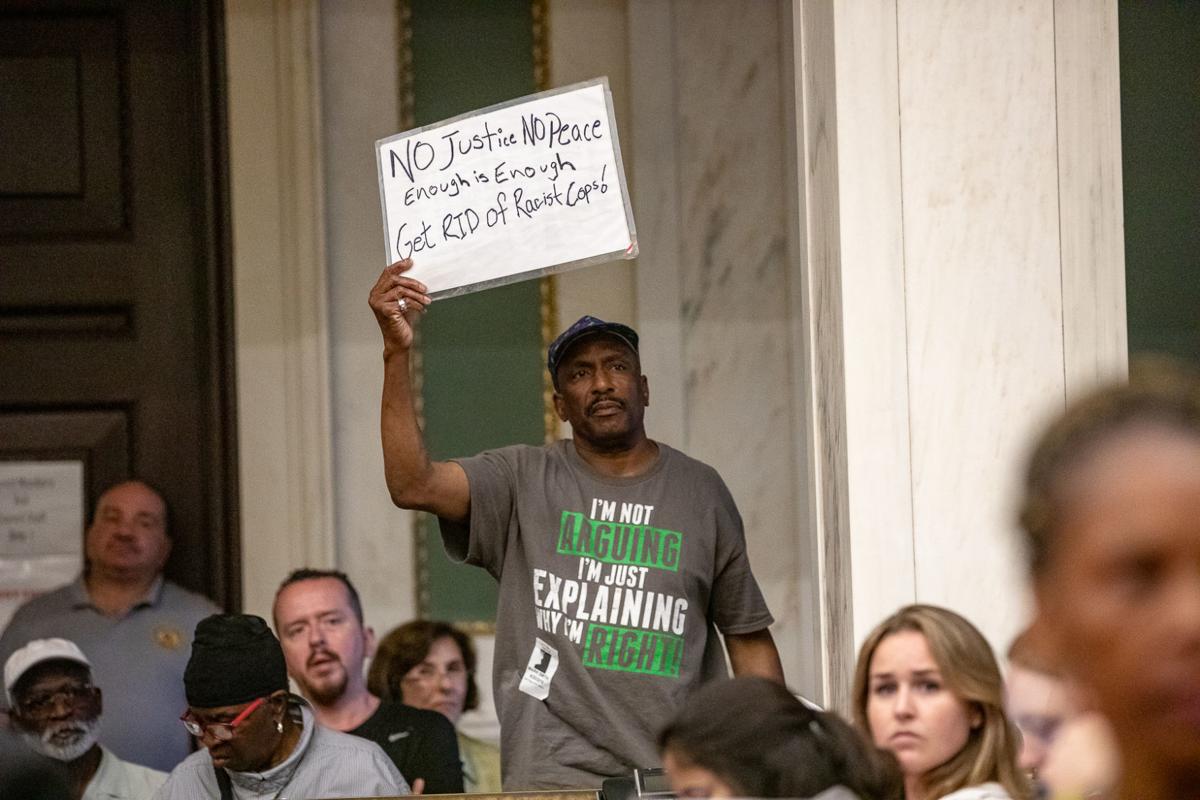 A man holds up a sign during the City Council meeting on Thursday. — COURTESY OF PHILADELPHIA CITY COUNCIL/JARED PIPER 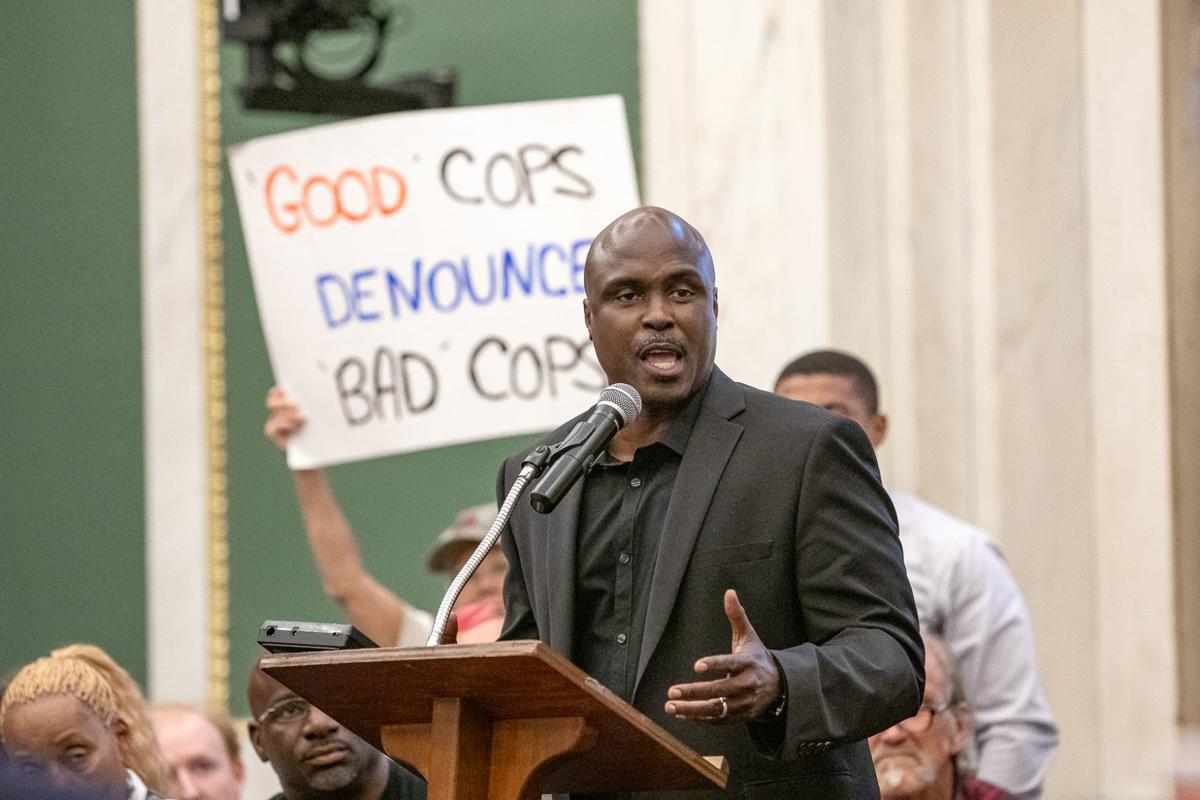 WURD host Solomon Jones, shown at a City Council meeting in June, is leading a coalition of prominent groups in pushing for a Black woman as the next Philadelphia police commissioner.

Rochelle Bilal, president of the Guardian Civic League, speaking at City Hall in this file photo from 2019. — COURTESY OF PHILADELPHIA CITY COUNCIL/JARED PIPER

A man holds up a sign during the City Council meeting on Thursday. — COURTESY OF PHILADELPHIA CITY COUNCIL/JARED PIPER

WURD host Solomon Jones, shown at a City Council meeting in June, is leading a coalition of prominent groups in pushing for a Black woman as the next Philadelphia police commissioner.

On Thursday, the 17-member body voted to hold a public hearing over the database from the The Plain View Project, which documented the alleged Facebook posts by 328 city police officers. Seventy-two of the officers have been placed on administrative leave.

Councilman Derek Green, the main sponsor of the resolution, said reading the project’s findings was disturbing and, “as a Black man, it was painful.” He said the allegations have “eroded this trust” in the police department.

Answers were not expected to come for months.

Green said City Council’s Committee of the Whole won’t hold the public hearing until the police department concludes its own investigation.

Thursday was City Council’s final session before summer break. The next scheduled session is Sept. 12, so a hearing most likely will not be held until after then.

Police Officer and department spokeswoman Tanya Little said in an email that Commissioner Richard Ross declined to comment on the anticipated public hearing.

The department was conducting an investigation into 321 police officers, Little said, and the commissioner will “provide updates as the investigation unfolds.”

The project looked at Facebook accounts of about 2,900 active officers and 600 retired officers in Philadelphia and seven other departments, and found thousands of questionable posts.

Dozens of criminal justice advocates attended the session to support the public hearing and shamed the council members who did not co-sponsor the resolution. Those who attended included Black faith leaders and Solomon Jones, the WURD radio host and local columnist who organized a recent rally over the posts.

At times, advocates chanted “No justice! No peace!”

Jones demanded more action from legislators because “we will not have racist police patrolling our streets.”

“We need all of you standing up together on this issue and making sure that our communities are safe!” Jones told City Council members. “That’s what we sent you here for!”

Retired city police officer Rochelle Bilal, president of the Guardian Civic League and the Democratic nominee for sheriff in November’s election, said law enforcement officials were “embarrassed and ashamed” over what was exposed by the project.

“And this is damaging the good work that all of us in this city do,” she said. “It damages the trust. Do you know how long it’s been that people like us — Black cops, Hispanic cops, good white cops, all cops — have been working to build that trust?”

Following a violent Father’s Day weekend of shootings that left five dead from gun violence, Councilman Curtis Jones said the city was in a state of emergency. He noted another homicide on Thursday in his own 4th District.

But Jones said the fallout from the racist and offensive Facebook posts has hurt the public trust police officers need to do their jobs.

“What those 300-plus officers did,” he said, “was raise a shadow of doubt about where they stood” in relation to the oath they swore to protect and serve.

City Council’s Special Committee on Gun Violence Prevention will hold an emergency meeting to address the surge in gun violence between 11 a.m. and 1 p.m. on Wednesday inside the Council Chambers at City Hall, Room 400.

Those Philly police with offensive Facebook posts? Some have a long history of complaints

Police officers taken off streets during investigation of Facebook posts

As Philadelphia police leadership deals with fallout over the Facebook scandal, WHYY and Billy Penn have obtained an unprecedented release of …

Police to fire 13 cops who made racist, violent Facebook posts

The city of Philadelphia spent $25,000 to find out if city police were exercising their right to free speech or just blasting hate when they p…