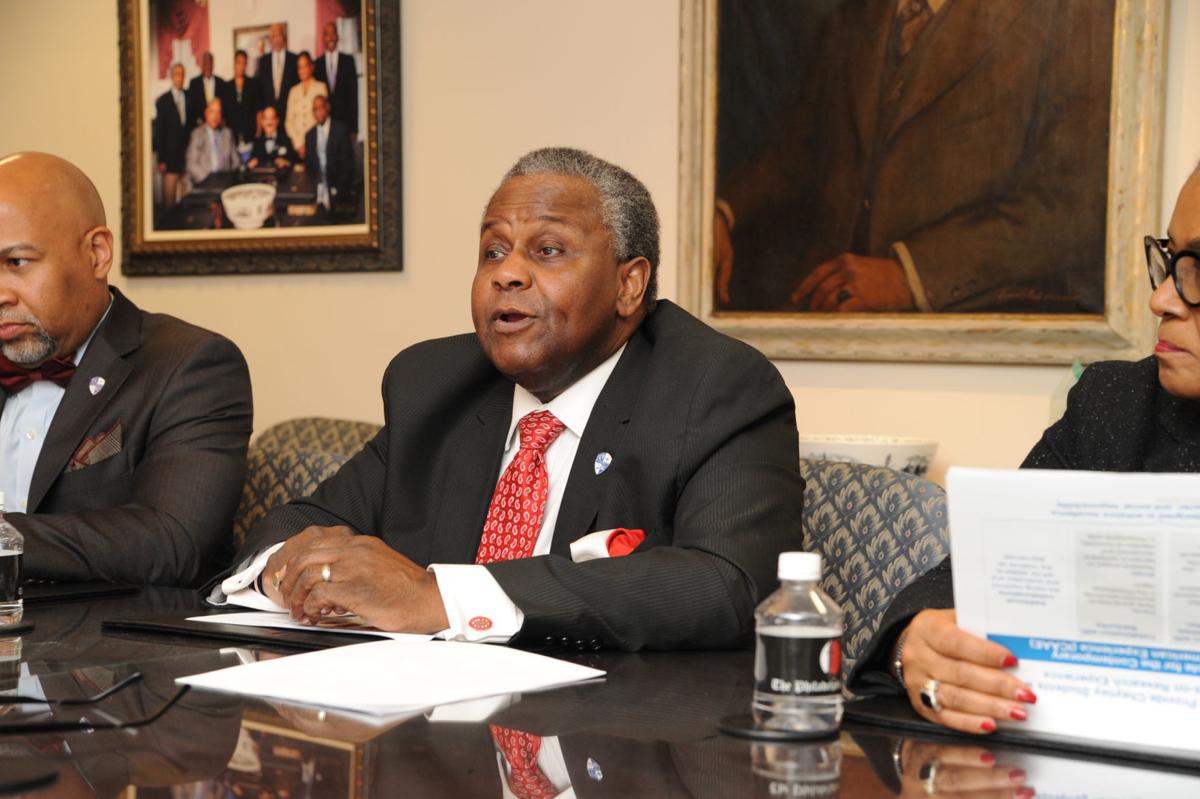 Cheyney President Aaron Walton, center, attended an editorial meeting at The Philadelphia Tribune on March 1. He was flanked by Clifton Anderson, left, the school's senior adviser and chief strategist, and Rosalyn McPherson, a representative of the ROZ Group, which is handling fundraising efforts for the college. — PHOTO ABDUL R. SULAYMAN/TRIBUNE CHIEF PHOTOGRAPHER 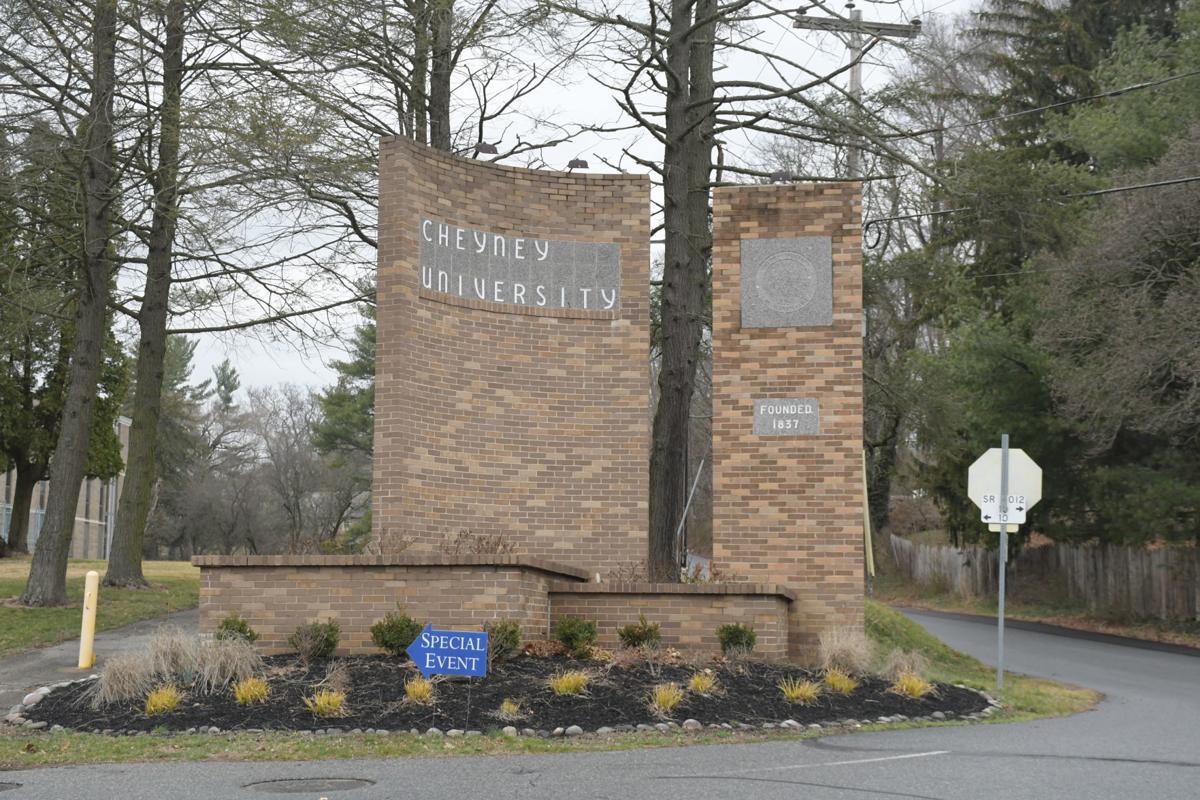 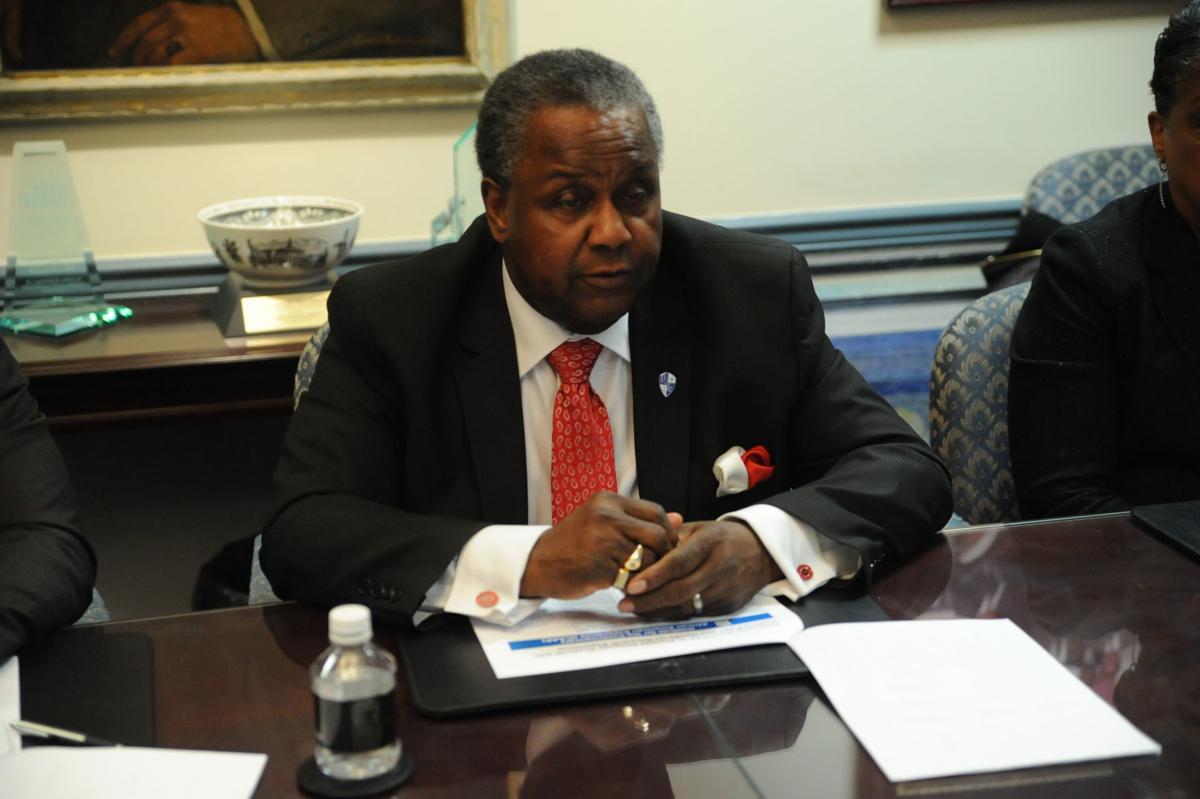 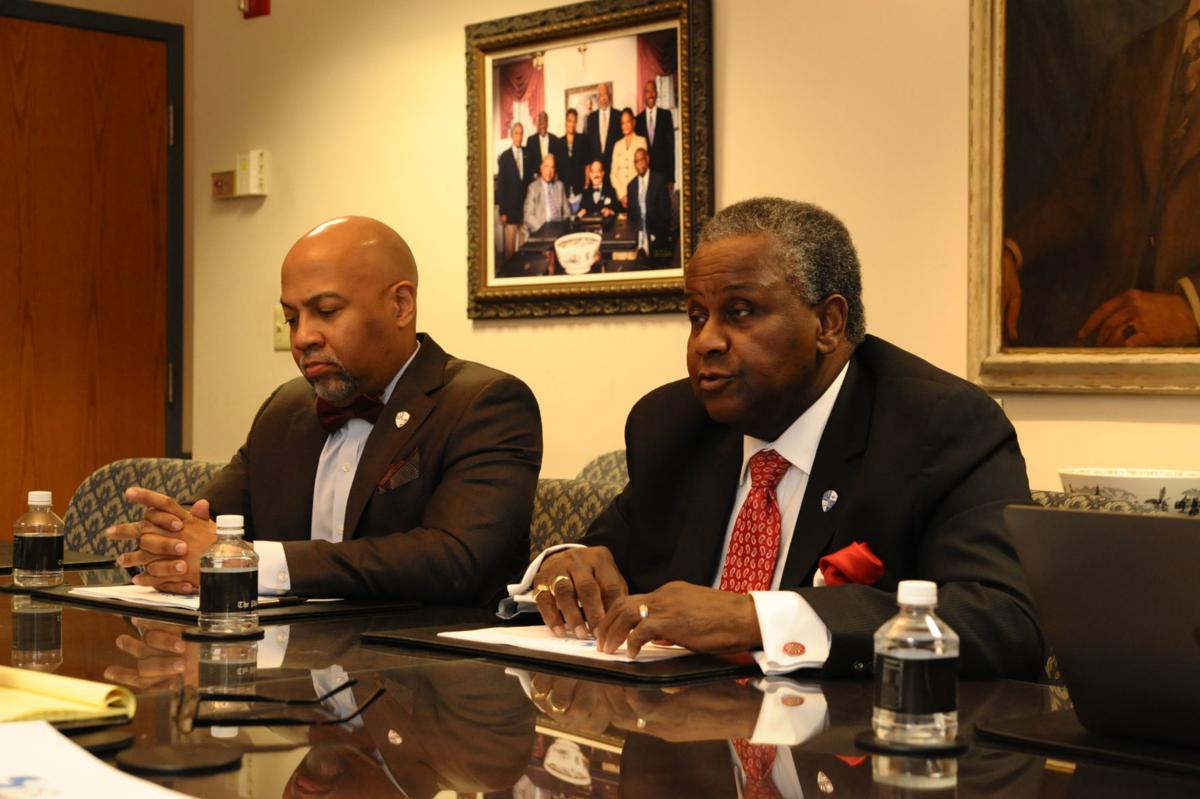 Cheyney President Aaron Walton, center, attended an editorial meeting at The Philadelphia Tribune on March 1. He was flanked by Clifton Anderson, left, the school's senior adviser and chief strategist, and Rosalyn McPherson, a representative of the ROZ Group, which is handling fundraising efforts for the college. — PHOTO ABDUL R. SULAYMAN/TRIBUNE CHIEF PHOTOGRAPHER

Cheyney University President Aaron Walton is planning a media blitz to tell supporters what has happened since he took the helm of the nation’s oldest Black college in June 2017.

“It was this first year that was most challenging because now you’re establishing the ground rules, after that it’s kind of business as usual,” Walton said during a meeting with The Philadelphia Tribune’s editorial board. “We’re doing a lot of other things that will be supportive of our financial position moving forward and other forms of revenue. This first year we didn’t have those - the second and third year, we will.”

The university in Delaware County has three important dates in the coming months:

“Cheyney is going to stay open, the issue is accreditation. If you don’t get accredited, you’re no longer eligible for Title IV funds, nor are you eligible for Pell Grants, etc., and we would default on one of the conditions of staying accredited,” he said about federal grants, student loans and other funding .

“We’ve put together an aggressive hit list,” McPherson said. “We’re getting people on board with the fact that there is a real concrete plan in place as well as dynamic leadership, so we’re dealing with perception issues as well as financial goals.”

Walton said the university is not asking people to give money without a cause, adding that institutions cannot survive on student tuition and state appropriates alone.

Walton said Cheyney is not going out of business rather it’s transforming.

“You are investing in the future model that will set the pace for education,” Walton said. “We happen to be an HBCU, but this will be a model for HBCUs throughout the country.”

The university, which was established in 1837, has cut the number of majors it has from 19 to 15, and administrators are considering cutting more.

Cheyney had the steepest fall in enrollment among the 14 state-run colleges, according to data from the PASSHE. The number of students had plummeted by nearly 38 percent, going from 755 students being enrolled in the spring of 2018 to only 469 enrollees that fall.

To help bolster sagging enrollment, the school has developed the Institute for the Contemporary African American Experience, which includes partnerships with Thomas Jefferson University, Starbucks and Epcot Crenshaw, a company that delivers solutions to environmental problems. The programs will provide students with experience in allied health, research labs and social justice.

Cheyney also offers a bachelor’s degree in Hotel, Restaurant, and Tourism Management, a program that is accredited.

“We’re trying to tie gainful employment into the majors that we will have,” Walton said. “These are the emerging fields, these are the fields that the greatest economic viability will occur from and that is what will proliferate the institute.”

Cheyney also touts its Keystone Honors Program, which is intended to enhance the scholarly environment at the 275-acre campus about 30 miles west of Philadelphia.

The university has raised its standards for enrollment. As of Friday, it had received 2,665 applications for fall admission. Of that figure, 1,535 students were offered admission, and 76 have paid $250 in deposits to secure a spot. Only three students had paid deposits about this time last year.

“You look at the fall of 2018, we had not one student that we had denied admission to Cheyney,” Walton said. “We had open enrollment; anyone who applied they got in. Now we’re becoming to be a lot more selective.”

Clifton Anderson, senior adviser and chief strategist at Cheyney, said the amount of progress made at the university has been “nothing short of remarkable.”

“If you look at the number of challenges the president inherited when he stepped into the role about 20 months ago,” Anderson said, “what you saw publicly paled in comparison to what was the reality. It was the most challenging of circumstances.”

Tyah Fuller, a 22 year-old junior from Chester, says although the student population is not what it used to be, things at her HBCU "are getting better."

"I like the new president, I think he's helping a lot," said Fuller, who is majoring in education. "By the time we see the change, I'll probably have graduated by then."

Freshman Anthony Martin, from Bowie, Maryland, says Cheyney will be back on track in due time.

"I think we're making a change, we're being very progressive in pushing toward a better future," the 19 year-old biology major said.

Darby native Alphonso Samukai says despite Cheyney not being his first choice and the declining enrollment, he is glad with his choice.

"Everybody sees the ups and downs of Cheyney and some see the bad in Cheyney," Samukai said. "I plan to graduate from Cheyney University. It's really not a bad school. The staff and the professors - everybody is real supportive."

All three students say they like Walton and what he's doing for Cheyney.

This story was edited on Tuesday, March 5, to add comments from students.

Gov. Tom Wolf and leaders of the state university system met earlier this week, and agreed to support efforts to transform and save the nation…

Cheyney University’s accreditation has been extended for another year under probationary status, the Middle States Commission on Higher Educat…

Pa. Higher Ed. Chancellor Greenstein has a vision for Cheyney

Cheyney president optimistic budget will be balanced by month's end

With less than a month remaining before Cheyney University must balance its budget, President Aaron Walton expressed optimism that the beleagu…

With Sunday looming as the deadline for Cheyney University to prove it has balanced its budget, Cheyney President Aaron Walton was optimistic …

I think since he took the post of head of the university, the university has been developing and flourishing. Many students study diligently and attend all classes. But some students need help. I can offer assignment help at PapersOwl UK, I hope that I can help everyone. I have a lot of experience in the field of education.