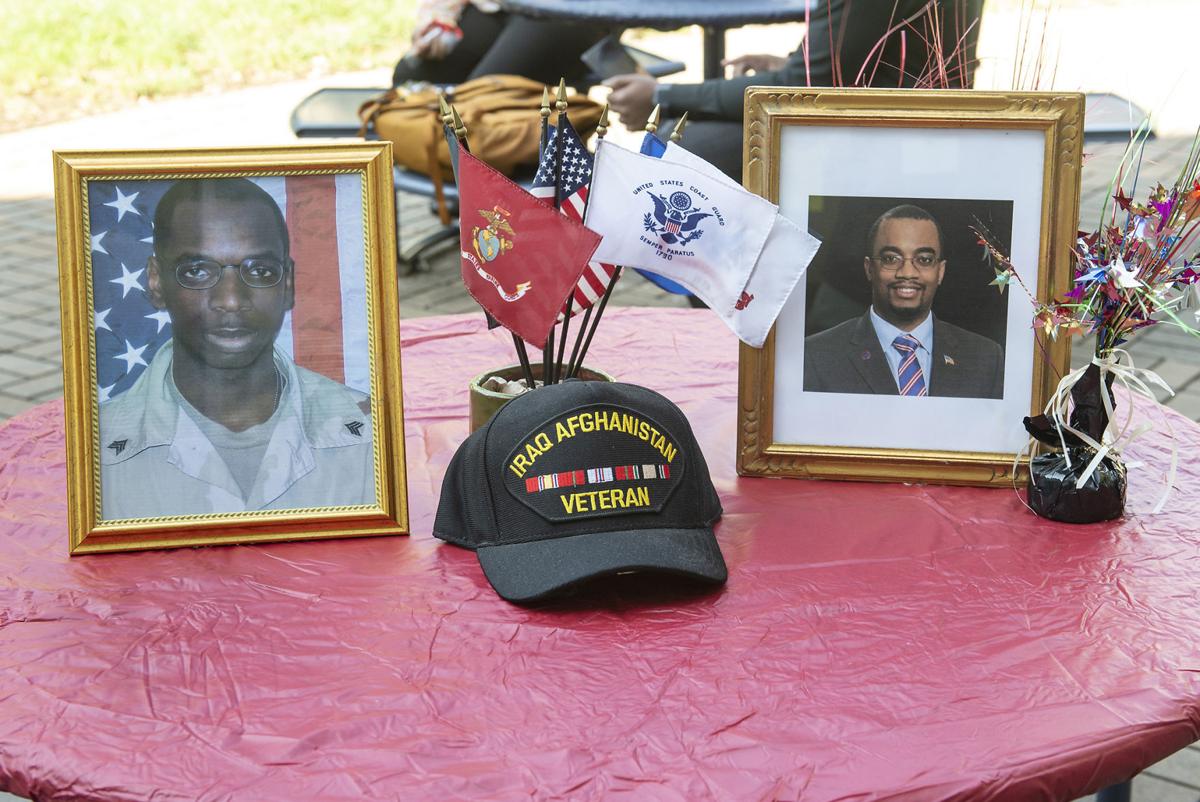 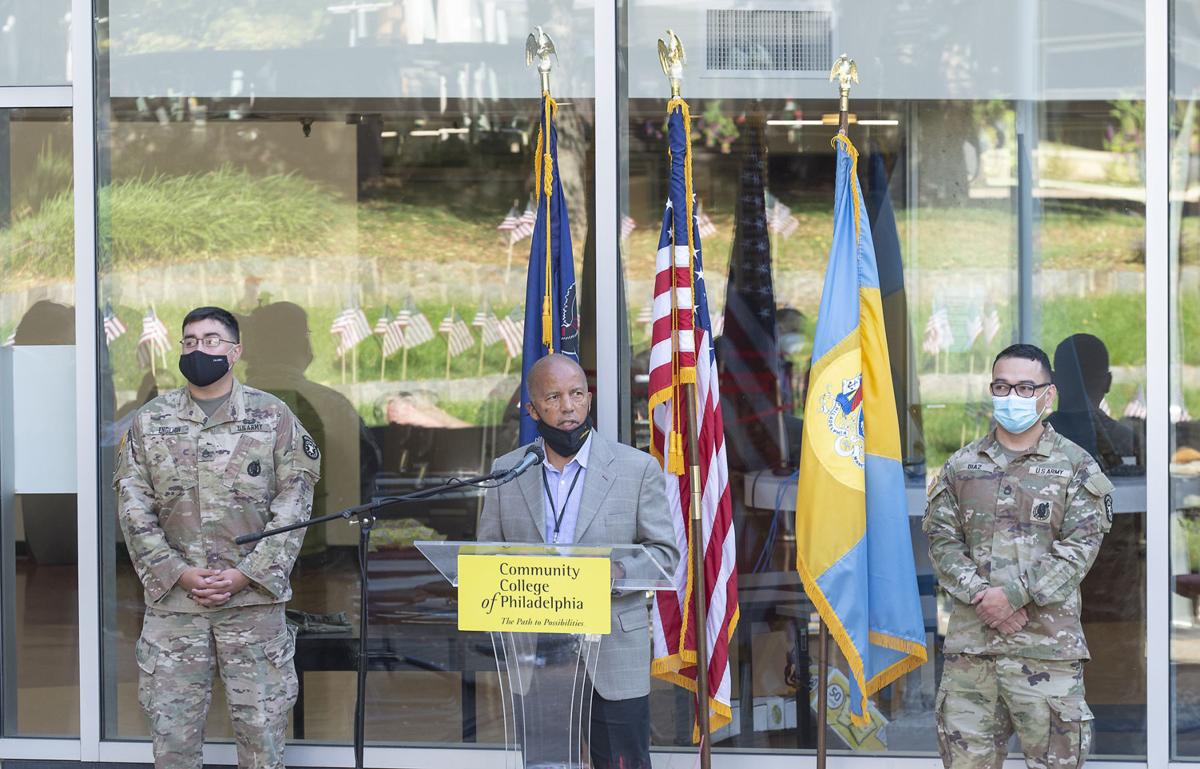 Community College of Philadelphia President Donald Guy Generals addresses the crowd at an event commemorating the 20th anniversary of the 9/11 attacks. 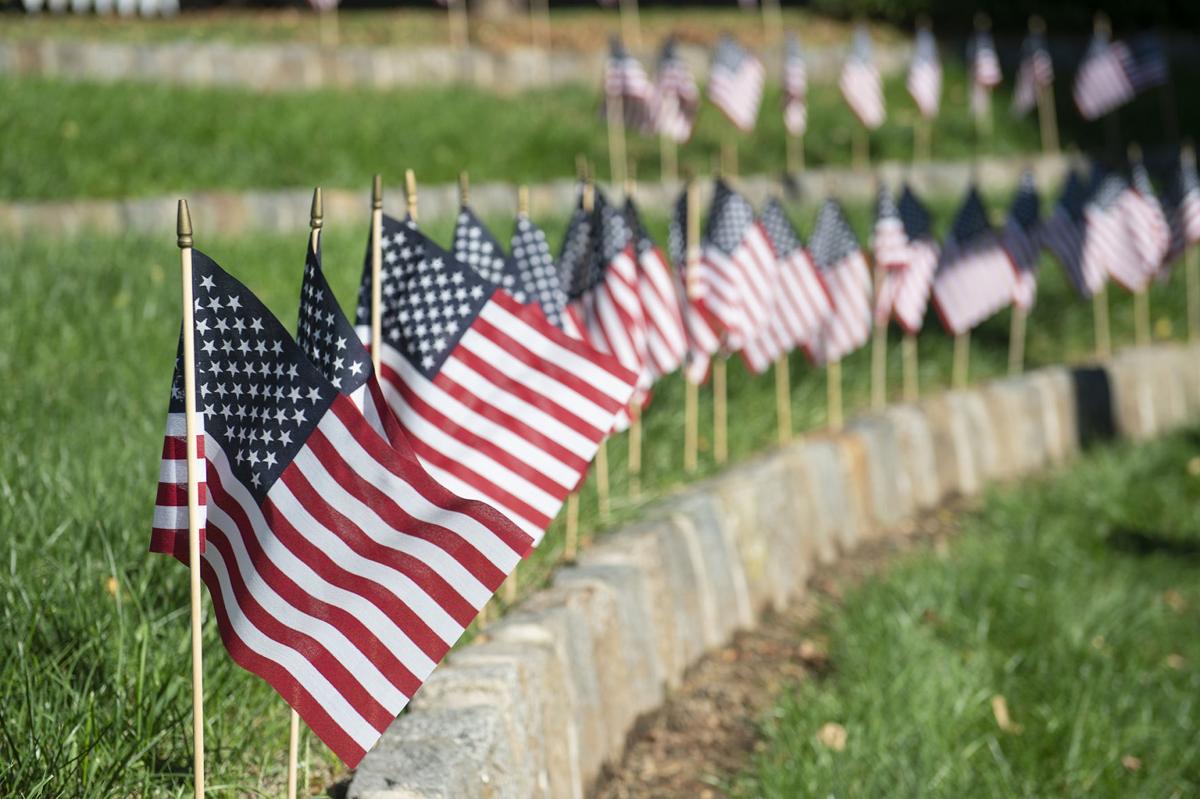 American flags on display during an event commemorating the 20th anniversary of 9/11.

Community College of Philadelphia President Donald Guy Generals addresses the crowd at an event commemorating the 20th anniversary of the 9/11 attacks.

American flags on display during an event commemorating the 20th anniversary of 9/11.

In recognition of the 20th anniversary of Sept. 11, Community College of Philadelphia (CCP) honored college alumni and Philadelphians whose lives were lost during the terrorist attacks.

The in-person Patriot Day event was held at the Bonnell Circle on the college’s campus Friday.

“We come together to commemorate those who paid the ultimate sacrifice for our democracy in New York City, Washington, D.C., and Shanksville, Pennsylvania,” said CCP President Donald Guy Generals. “They put their lives on the front line of democracy and freedom.

“Our freedom and democracy is not guaranteed,” he added. “We have to continue to fight for it and believe in it. On this day it gives us a real reminder of just how fragile it can be if we don’t work toward protecting it.”

On the morning of Sept. 11, 2001, four passenger airliners were hijacked for use in coordinated terrorist attacks on the United States.

Two of the planes crashed into the North and South towers of New York City’s World Trade Center, resulting in the collapse of both 110-story buildings within two hours.

A third plane slammed into the Pentagon in Washington, D.C., killing 184 people, and the fourth plane crashed into a field near Shanksville, leaving no survivors.

In all, the attacks killed 2,996 people and injured more than 6,000 others. In addition to the loss of civilian lives, the attacks were the deadliest incident for firefighters and law enforcement officers in the history of the United States, with 343 and 72 killed, respectively.

At the event in Philadelphia, CCP honored the lives that were lost by displaying 45 small American flags.

The flags honored 30 victims in Pennsylvania, three of whom were from Philadelphia, 13 service members who were killed in the Kabul airport attack in August, and CCP alumni Army E-4 Spc. Jason Mays and Army Sgt. Brahim Jeffcoat.

CCP veterans resource coordinator Steve Bachovin thanked the veterans for their service during his speech.

“Thank you for hearing about our nation’s call and keeping us safe,” Bachovin said. “You prevailed on the battlefield, have conducted yourself with honor and never broke faith with your country or your friends.

“Your service is not only an invaluable contribution to our country, but you remind your fellow citizens of what they can do,” he added. “We must never forget them and what they stood for.”

Mays, a Philadelphia native, received his high school diploma from the Job Corp and enlisted in the Army in 2001.

He deployed to Mosul, Iraq, from March 2003 to February 2004 during some of the heaviest fighting of the insurgency. Throughout his career, he earned many medals, including the Air Assault Badge. He was medically retired and earned an honorable discharge in 2005.

Mays earned an associate’s degree in business administration at CCP and bachelor’s and master’s degrees at Temple University.

He served on numerous councils and helped many service members transition to the civilian sector. He died in March. He was 37.

“Like most of the veterans returning home Jason was shy and introverted but there was always his inner light that shone through,” Bachovin said.

“He got involved in student life on campus working with student government and the clubs,” he added. “In 2014, while president of the student council he was named student of the year. He was always a good friend.”

A native of Philadelphia, Jeffcoat was a graduate of George Washington High School. A year after the Sept. 11 attacks, he graduated from CCP. He was assigned to the Army National Guard’s 1st Battalion, 111th Infantry Regiment (Mechanized), in Philadelphia.

Jeffcoat served during Operation Iraqi Freedom. In 2005, he was conducting convoy operations near Balad, Iraq, when an improvised explosive device (IED) detonated near his Humvee. Despite being injured, Jeffcoat managed to pull out the remainder of the men in his squad.

Jeffcoat later died from his injuries. He was 25. Spc. Kurt E. Krout was also killed in the IED attack.

“I heard about Brahim Jeffcoat when I started working part time at CCP in 2008,” Bachovin said. “Many of his buddies from Company A were attending school here at that time.

“A natural leader, he was a mentor and coach to the Philadelphia youth organization,” he added. “He was raised in a deeply spiritual family with a commitment to public service. He was also well liked by his fellow soldiers, instructors and administrators at Community.”

chill@phillytrib.com 215-893-5716 The Associated Press contributed to this story.