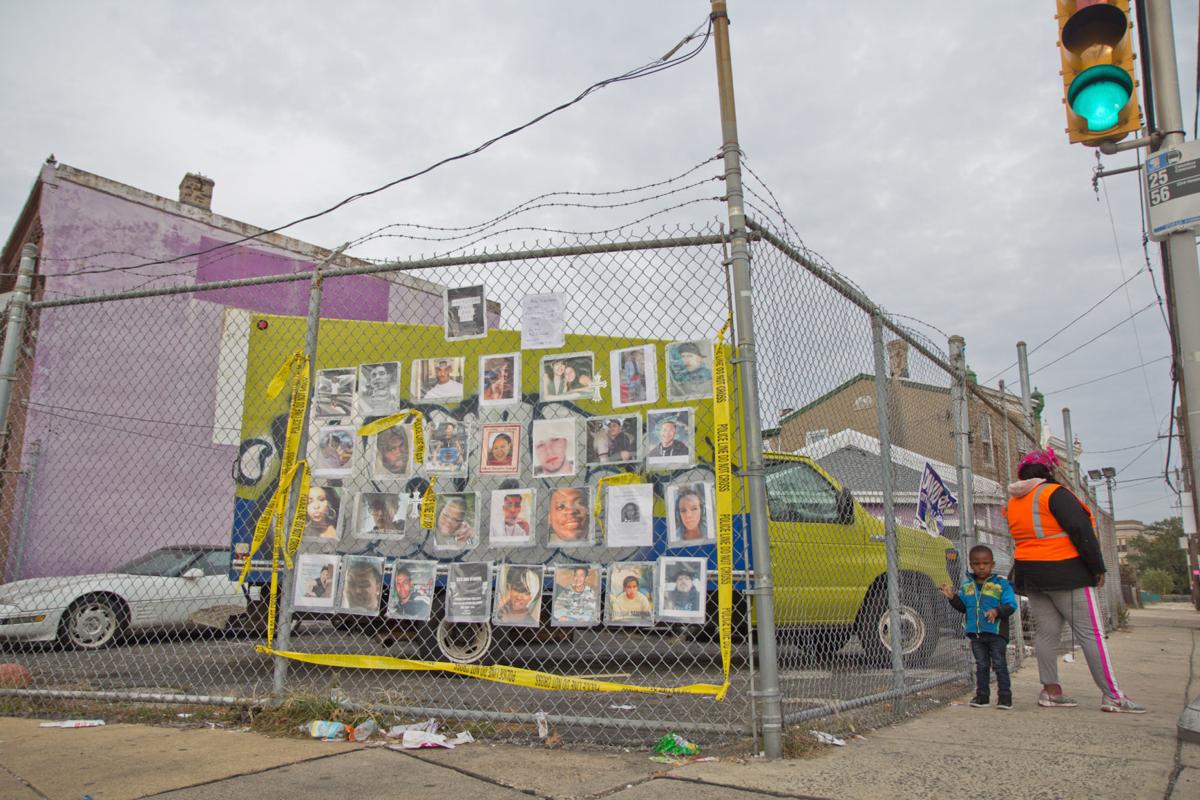 Ros Pichardo, an activist with Operation Save Our City, hung the photos of other victims of gun violence across from the sport where 10 year-old Semaj O’Branty was shot in the head walking home from school Wednesday. — Photo WHYY 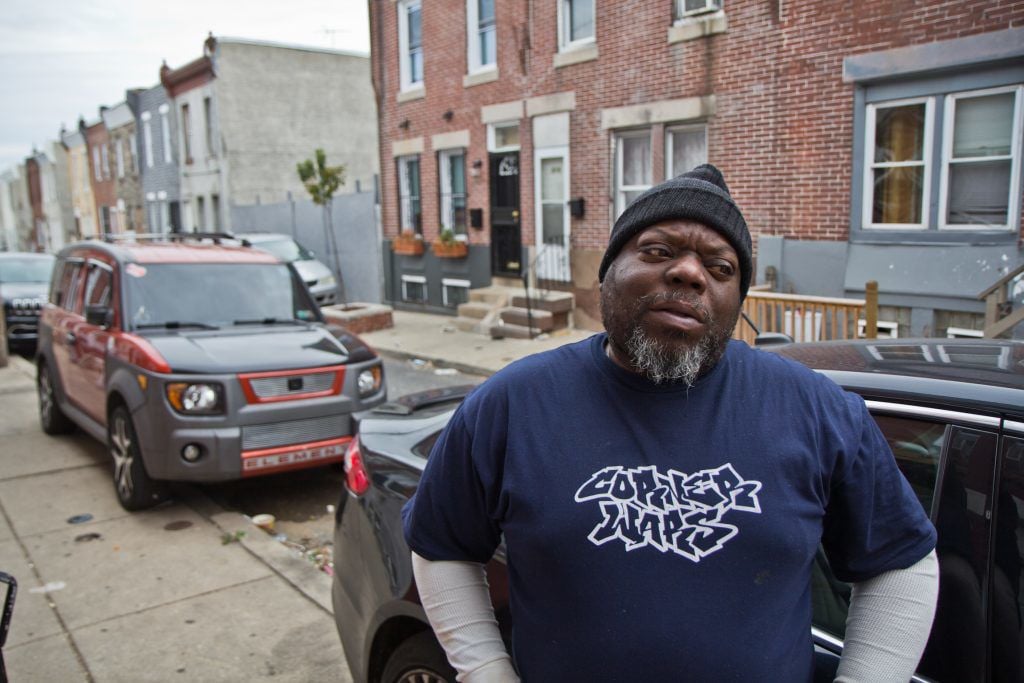 Galen Tyler, an organizer with the Poor People’s Economic Human Rights Campaign, said officials need to do more than just arrest people, but need to address issues of food, housing, health care and jobs in the city.

Ros Pichardo, an activist with Operation Save Our City, hung the photos of other victims of gun violence across from the sport where 10 year-old Semaj O’Branty was shot in the head walking home from school Wednesday. — Photo WHYY

Galen Tyler, an organizer with the Poor People’s Economic Human Rights Campaign, said officials need to do more than just arrest people, but need to address issues of food, housing, health care and jobs in the city.

When Semaj O’Branty was shot in the back of the head while walking home from school in Philadelphia’s Frankford neighborhood Wednesday afternoon, he became the third young person to be caught in the crossfire in as many weeks.

To activists in Kensington and Frankford, it is, of course, most important to support victims’ families after a tragedy occurs. But to many, the shooting of innocent bystanders, especially children, is a call for outrage at both community complacency and institutional failure.

As of Wednesday evening, Semaj was in stable but critical condition after undergoing surgery at St. Christopher’s Children’s Hospital, according to the Facebook page of community activist Cheri Honkala. Honkala runs the Poor People’s Economic Human Rights Campaign, a grassroots nonprofit with which Semaj’s mother was a longtime volunteer.

Anti-violence activists are incensed by the shooting.

“Children are off-limits — there’s no reason whatsoever why anyone should shoot at anyone while a child is in plain sight,” said Terrez McCleary, founder of Moms Bonded by Grief, a support group for mothers who have lost children to gun violence.

Surveillance video shows shots fired from the window of a red Pontiac, aimed at two men standing outside a convenience store at the corner of Margaret Street and Torresdale Avenue Wednesday afternoon with Semaj standing between them.

“The community should be in an uproar — I know somebody knows who’s driving that red car,” McCleary said. “He went home and laid next to somebody last night. Somebody needs to have a heart and turn him in.”

McCleary stressed that, in her mind, it is a sense of impunity that allowed the perpetrators to shoot freely and believe they could get away with it. She expressed frustration with District Attorney Larry Krasner, with whom she has met, for being too lenient on gun charges and sentencing, as well as communicating poorly with victims’ families.

“His response to me during that meeting left a bad taste in my mouth,” she said. “I do not do politicians because I don’t like to be lied to.”

“When it hits home, it makes you even more fired up about: Where are the people that are supposed to be in charge and say they represent the city and protect the neighborhoods and stuff like that?” he said.

Most homicides in Philadelphia go unsolved. In fiscal year 2018, the clearance rate for homicide cases was 40%, compared with a national average of 60%. According to the Philadelphia Police Department’s new website — launched in August to track homicides where no arrest, charge or prosecution was made — there are 131 unsolved murders so far this year.

That low clearance rate ate at anti-violence activist Isaac “Ikey Raw” Gardner. So much so, that he started his own organization in 2018 to collect information and help solve homicides, on the premise that people with intel would be more comfortable coming forward about a killing to someone they knew in the community than to a detective. Since launching his service in October of last year, Gardner said, he has helped bring seven families the justice they deserve.

Gardner blames the shootings of innocent bystanders on a combination of social media, gun availability and changing culture.

“In my days, when I was in the street late ’80s, early ’90s, older gentleman, they wouldn’t give me a gun,” said Gardner, who has spent time in federal and state prison. “They wouldn’t let me shoot somebody. We had to fight, we had to fistfight.”

In his day, said Gardner, there was a code: no women, no children, no innocent bystanders.

Now, he said, practically everyone has a gun, and someone shooting up a house with an automatic weapon gets praise on social media.

“You used to have older guys, before they pulled their trigger, they used to come tell us, ‘We about to start shooting, go in the house.’ It’s sad to say, but that’s how it was in my day.”

Gardner was clear that he didn’t mean to condone violence, but that his experience on the street gave him a pessimistic attitude about the possibility of gun violence ending altogether. That’s why he tends to make what is essentially a harm-reduction argument, to ease the impact on those in surrounding neighborhoods not directly involved in crime and drug activity.

He, like McCleary, called upon the community to speak out against what they know is happening.

“The violence won’t stop, but what we have to do is hold people accountable,” Gardner said. “We can’t just say, ‘Black lives matter,’ when a police officer kills someone or a white person kills a Black person. That’s not the only time Black lives matter. Black lives are supposed to matter every day.”

Boy, 10, critical after being shot in head in northeast Philadelphia

Uncle of 10 y.o. boy who was shot arrested for firing back

Ernest Richardson, the uncle of the boy who was shot in the head on Wednesday, has been charged for his role in the shooting, the District Att…