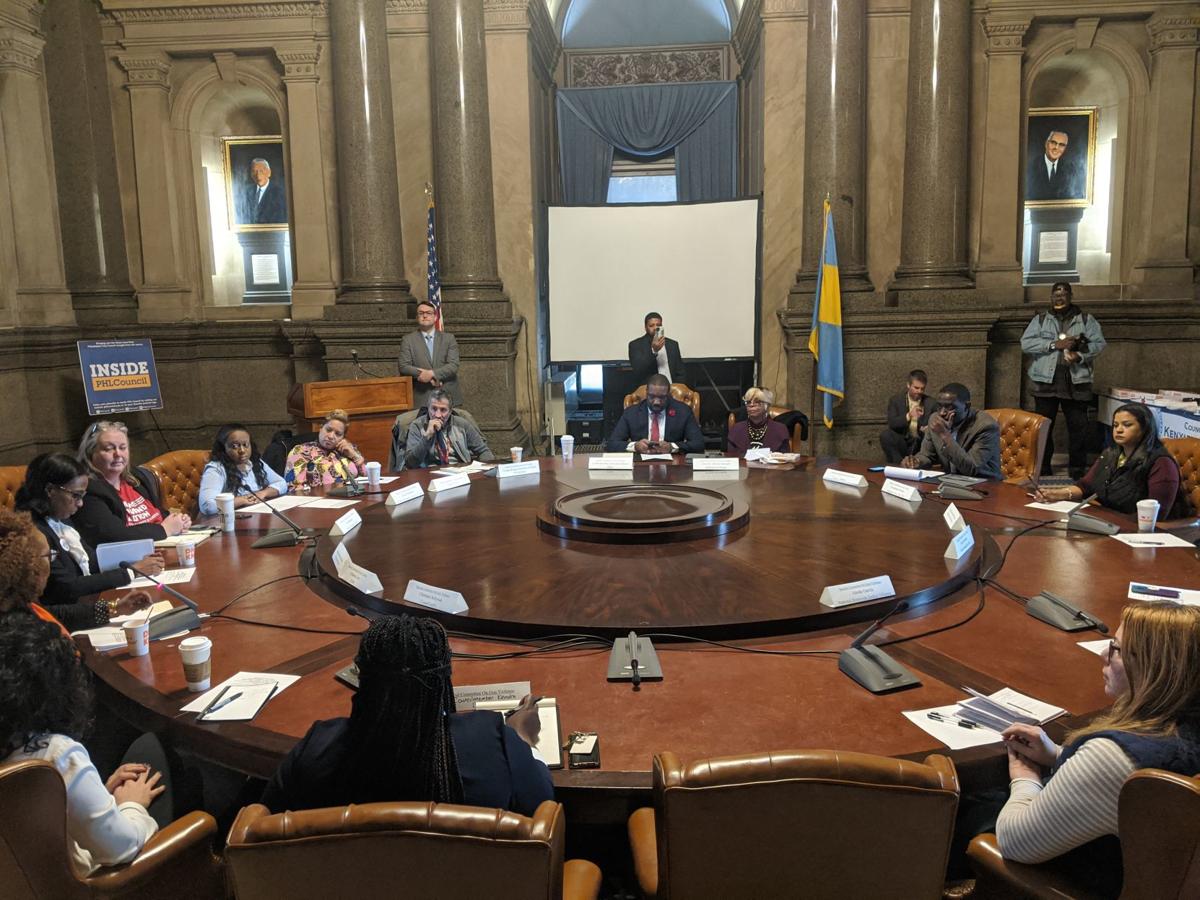 A few dozen anti-gun violence advocates and members of grassroot groups - the vast majority of whom were women of color - gather for a roundtable discussion on the issue in the City Council Caucus Room in City Hall on Wednesday. — Tribune Photo/Michael D’Onofrio 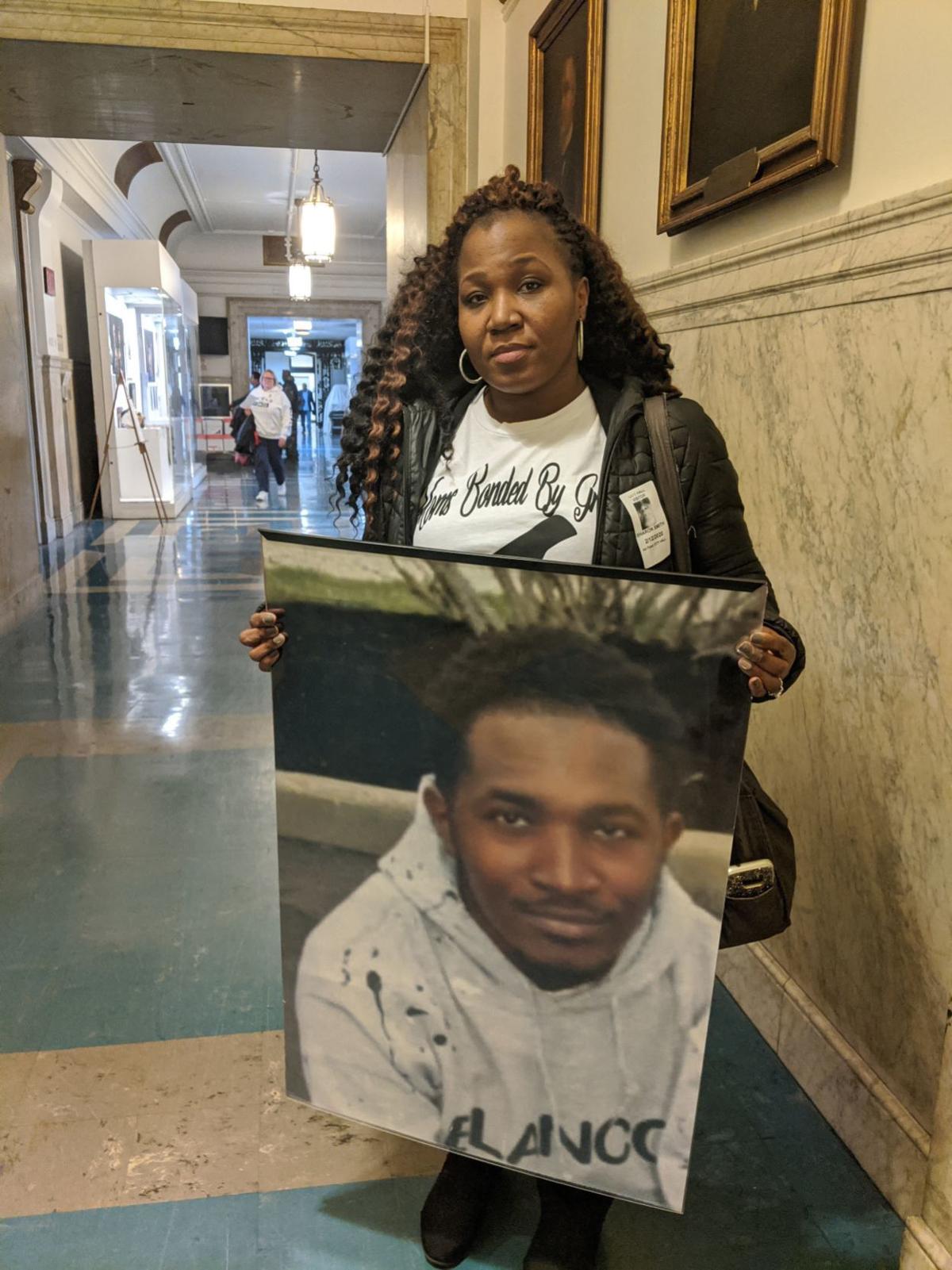 “You feel like you have to solve your own case,” says Sharon Smith while grasping a photo of the 25-year-old son she lost to gun violence in 2017. She attended a roundtable discussion on gun violence at City Hall on Wednesday.

A few dozen anti-gun violence advocates and members of grassroot groups - the vast majority of whom were women of color - gather for a roundtable discussion on the issue in the City Council Caucus Room in City Hall on Wednesday. — Tribune Photo/Michael D’Onofrio

“You feel like you have to solve your own case,” says Sharon Smith while grasping a photo of the 25-year-old son she lost to gun violence in 2017. She attended a roundtable discussion on gun violence at City Hall on Wednesday.

Anti-gun violence activists and two freshman City Council members are questioning how committed the Philadelphia Police Department is to fighting crime and gun violence in the city, particularly as it affects people of color.

“There’s a significant level of concern as to how serious are folks taking these investigations when it comes to poor people and people of color,” said at-large Councilman Isaiah Thomas, a Democrat, during a roundtable discussion organized by Councilman Kenyatta Johnson.

At-large Councilwoman Kendra Brooks, a member of the Working Families Party, said the “lack of respect to victims and survivors from the police department is horrific.”

“They don’t have that level of respect for Black children,” Brooks said, contrasting Philadelphia police officers with the law enforcement officers who investigated the Sandy Hook Elementary School mass shooting. Twenty-six people, including 20 children, were killed in the 2012 shooting; the majority of them were white.

Homicide, Johnson-Speight said, “is the leading cause of death among African-American males 14 to 34. … I know that if that was happening in other communities, we would have a better response.”

With 44 homicides as of Tuesday in Philadelphia, the rate was up 26% compared with the same time last year. The Philadelphia Police Department’s homicide clearance rate was 60%, meaning 40% of all homicides go unsolved, according to a department spokesperson.

Johnson, who represents District 2, held the meeting to hear feedback from local groups about how to reduce gun violence in the city. Johnson, a Democrat, is currently facing federal corruption charges.

Community group leaders and officials who attended a hearing about gun violence on Tuesday night had called on the city to provide more funding for their efforts.

And city officials and advocates believe that will help.

But they said police also need to show more respect to victims, who are primarily people of color. The lack of respect, they said, contributes to delays in investigations and support services.

Brooks called for forming a rapid-response program to immediately address issues in communities affected by gun violence and working with the police department on sensitivity training.

“We are all doing the best job that we can to respond even way before those 48 hours [after an incident] but we don’t get that notification,” she said.

“We need a lot of help because people don’t know how we feel, they don’t know what we go through,” she said. “When you reach out to law enforcement who are supposed to be helping you, it’s like you’re just getting pushed to the side.”

“You feel like you have to solve your own case,” said Sharon Smith, while grasping a poster-sized photo of the 25-year-old son she lost to gun violence in August 2017.

Smith, 48, said her son’s murder remains unsolved. A member of the Moms Bonded By Grief support group, she said Philadelphia police have been unresponsive and insensitive in the years since.

City Council’s Special Committee on Gun Violence Prevention, which Johnson heads, will hold a hearing at 1 p.m. on Feb. 20 in the City Council Chambers in City Hall.

State leaders have pledged to rein in convenience stores that are the site of drug dealing, prostitution and public drunkenness in the city.

Councilwoman wants Philadelphia voters to weigh in on ‘stop and frisk’

Danielle Outlaw talks about race, crime and the homicide rate on her third day in office

In the three days Danielle Outlaw has spent in her new job as Philadelphia’s new police commissioner, she has heard the parents — particularly…

The members of the Pennsylvania Legislative Black Caucus recently announced a plan to push back against the bloody tide of gun violence.

In what is becoming a regular occurrence as Philadelphia continues to grapple with escalating gun violence, yet another church opened its door…

'It's a time like none other': City Council, police, residents speak during special hearing on gun violence