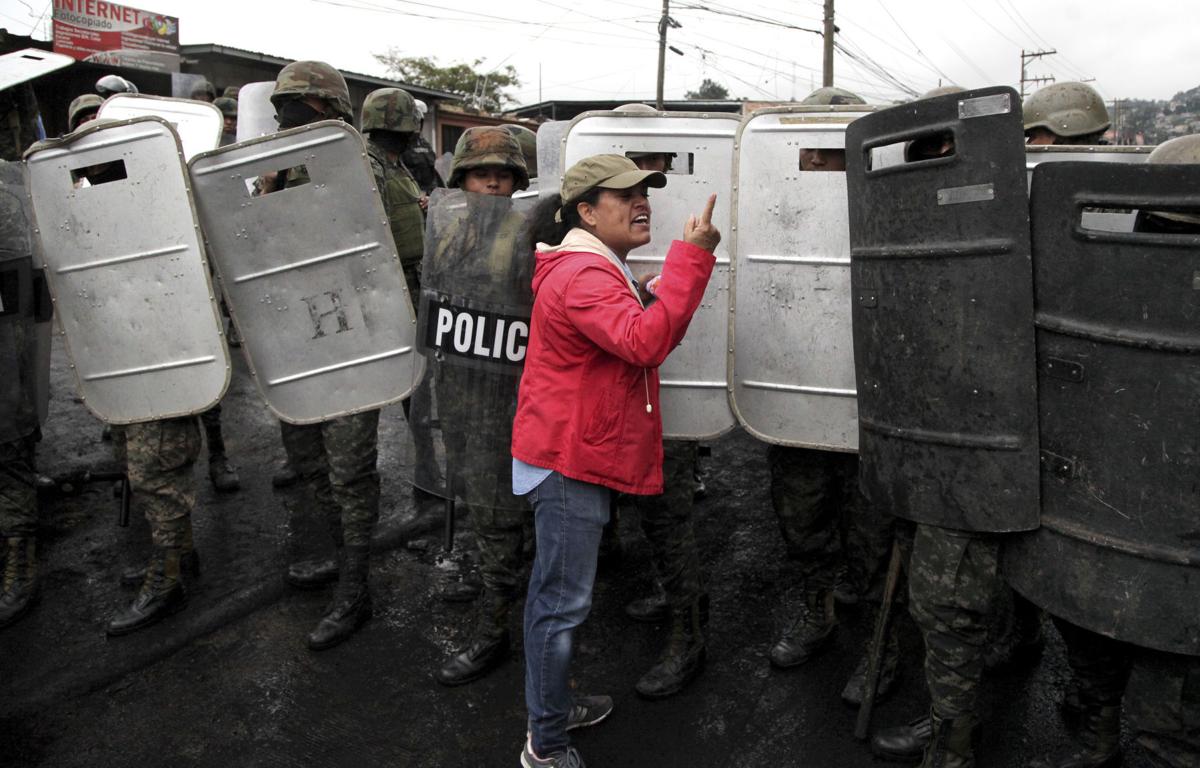 A woman argues at soldiers during a protest in Tegucigalpa, Honduras, Monday. President Juan Orlando Hernandez was declared the winner of Honduras’ disputed election, but his main challenger called for more protests and vowed to take his claims of fraud to the Organization of American States. — AP Photo/Fernando Antonio 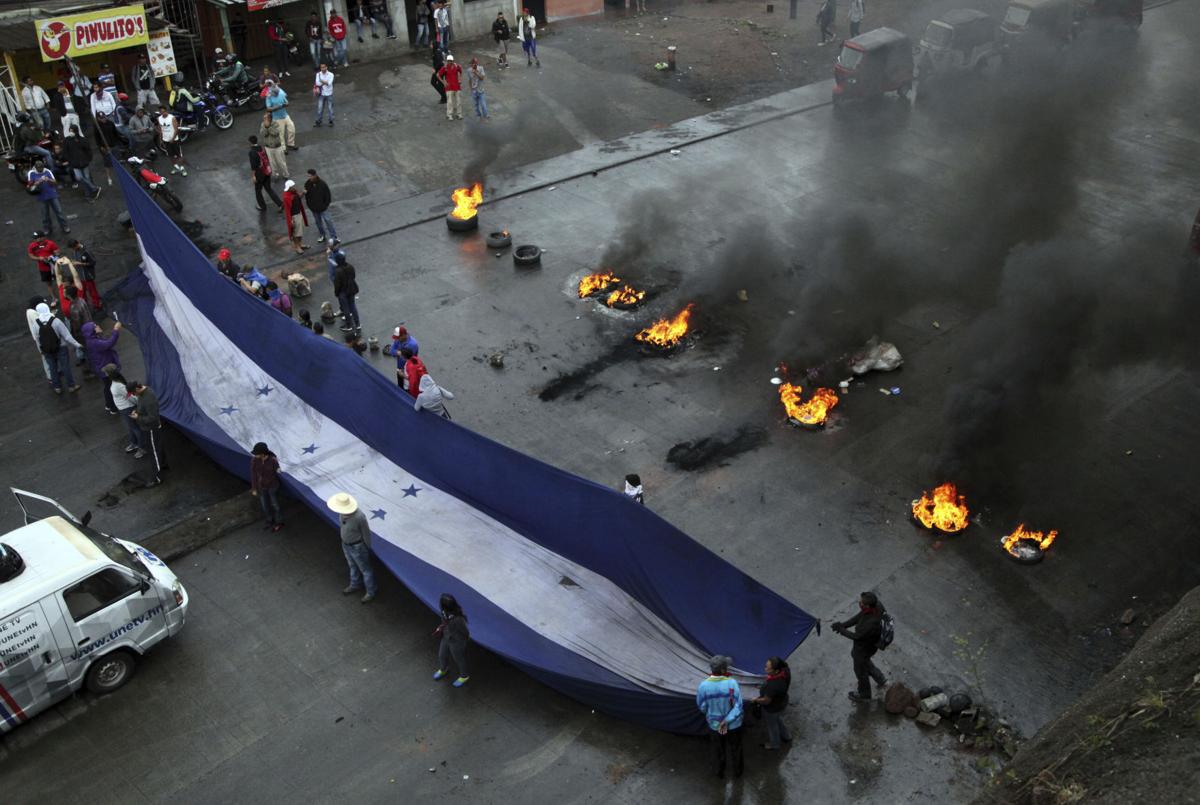 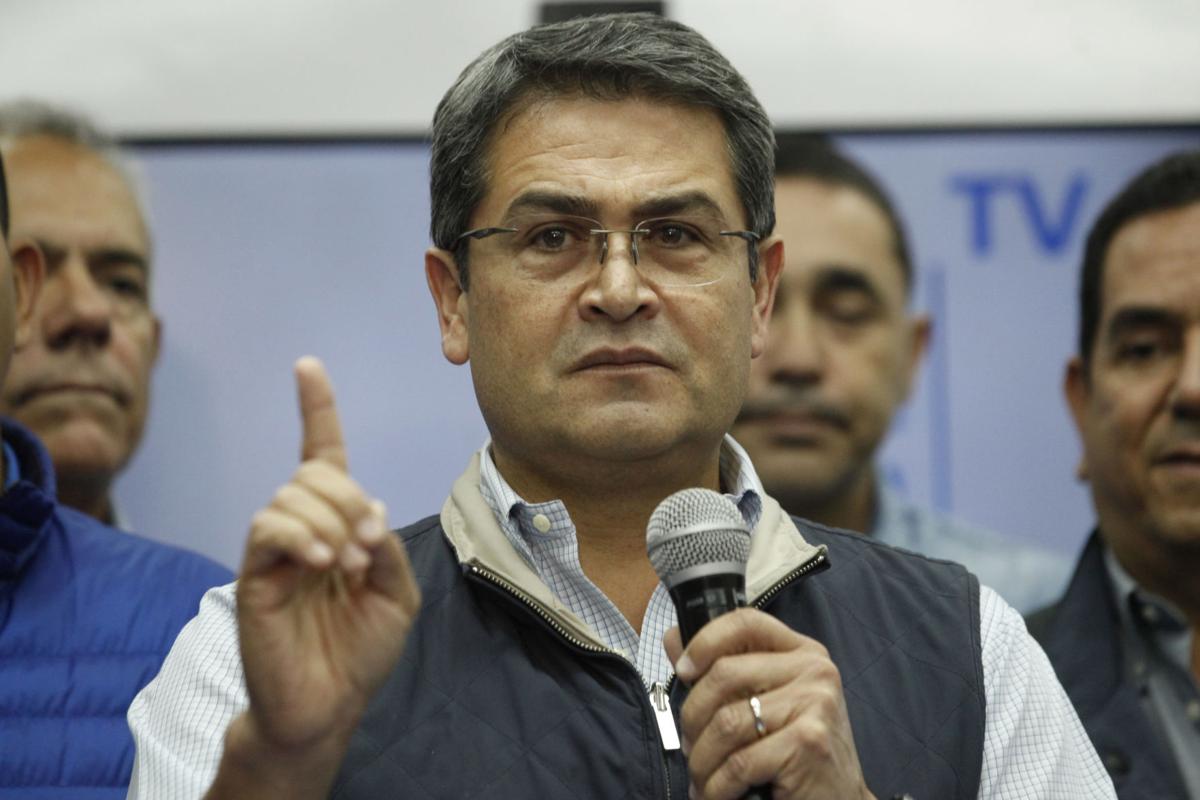 Honduran President Juan Orlando Hernandez at a Dec. 5 news conference. His government has accused his political rivals of ordering gangs to block streets and other acts of violence amid protests over the disputed Nov. 26 election. — AP Photo/Fernando Antonio, File

A woman argues at soldiers during a protest in Tegucigalpa, Honduras, Monday. President Juan Orlando Hernandez was declared the winner of Honduras’ disputed election, but his main challenger called for more protests and vowed to take his claims of fraud to the Organization of American States. — AP Photo/Fernando Antonio

Honduran President Juan Orlando Hernandez at a Dec. 5 news conference. His government has accused his political rivals of ordering gangs to block streets and other acts of violence amid protests over the disputed Nov. 26 election. — AP Photo/Fernando Antonio, File

TEGUCIGALPA, Honduras — Protests erupted across Honduras on Monday after an official declaration that President Juan Orlando Hernandez has won re-election, even as the Organization of American States proposed a re-do of the disputed vote.

The OAS, which sent election observers to the country for the Nov. 26 election, issued a statement saying it was impossible to determine the outcome with enough certainty due to irregularities.

Among the problems it listed were “deliberate human intrusions into the computer system, intentional elimination of digital traces,” opened ballot boxes and “extreme statistical improbability regarding levels of participation,” combined with the narrow vote differential.

“The only possible path for the winner ... is a new call for general elections,” the OAS said. “Respecting democratic values and citizens is the necessary road to safeguard society from death and violence.”

Vice President Ricardo Alvarez rejected the call for new elections and accused opposition leaders of acting like children. “The only election will be the one in four years,” he said. “In this country there will be order, mark my words, because we won’t let 20 Hondurans paralyze the country.”

Supporters of challenger Salvador Nasralla blocked streets and highways around the country Monday with burning tires and rocks. As soon as police and soldiers cleared obstacles, protesters put them back.

Universities, banks and some other businesses closed due to the disturbances in Tegucigalpa. People who had to work made their commutes on foot.

Most businesses were closed in the country’s second-biggest city, San Pedro Sula. National Police spokesman Jairo Meza said some businesses there had been looted. A bus was burned near La Lima, about 185 miles north of Tegucigalpa.

Textile magnate Adolfo Facusse, not a supporter of the president, said people were frustrated by the electoral court decision. “We must have new elections,” he said. “That is a good decision, but President Hernandez will have to give in to the public.”

Maria Gutierrez, a street vendor blocking the entrance to the Kennedy neighborhood in south Tegucigalpa with dozens of others, said she wants Hernandez gone. “We’re not fighting for Nasralla or anyone,” she said. “We fight for our rights.”

At least 17 people have died in violent street clashes since the election. — (AP)

Electoral tribunal President David Matamoros announced Sunday evening that Hernandez had won the election, saying, “We have fulfilled our obligation [and] we wish for there to be peace in our country.”

According to the court’s official count, Hernandez won with 42.95 percent to 41.42 for Nasralla, who long ago said he would not accept the result.

There was no immediate public comment by Hernandez, whose sister Hilda Hernandez, a Cabinet minister, died Saturday in a helicopter crash.

Marisa Matias, head of the European Union’s observer mission, said Monday that her team had not validated the election results because that was not its role. The team also would not recommend any new election “because that would be interference,” she said.

The first results reported by the electoral court before dawn the day after the election showed Nasralla with a significant lead over Hernandez with nearly 60 percent of the vote counted.

But public updates of the count mysteriously stopped for more than a day, and when they resumed, Nasralla’s lead steadily eroded and ultimately reversed in Hernandez’s favor.

The OAS decision to call for new elections seemed based in part on an analysis it requested from Irfan Nooruddin, an elections expert at Georgetown University’s foreign service school.

While Hernandez’s National Party said his late surge in the count was due to slow-arriving returns from rural areas where Hernandez was stronger, Nooruddin found evidence questioning that explanation.

He said Nasralla’s share of the vote began plummeting everywhere — in his strongholds as well as those of the National Party — at essentially the same point in the vote count.

There were also jumps in turnout in the last third of polling stations to report, increases so dramatic that statistically they would be expected to appear fewer than once in 1,000 replications, Nooruddin said.

Nooruddin wrote that he can’t explain the jump in turnout or the National Party’s big gain late in the count. “But put together it is consistent with a hypothesis of tampering with the vote tallies that were counted last,” he said. “I would reject the proposition that the National Party won the election legitimately.”

Nasralla traveled to Washington to present what he called evidence of fraud, and he met Monday with OAS Secretary-General Luis Almagro. He said he also planned to meet with officials from the U.S. State Department and human rights groups.

Interviewed by UneTV during a layover at the Miami airport, Nasralla called Hernandez’s re-election illegitimate and said he would ask the OAS to invoke its democratic charter against Honduras.

“The declaration by the court is a mockery because it tramples the will of the people,” Nasralla said. —