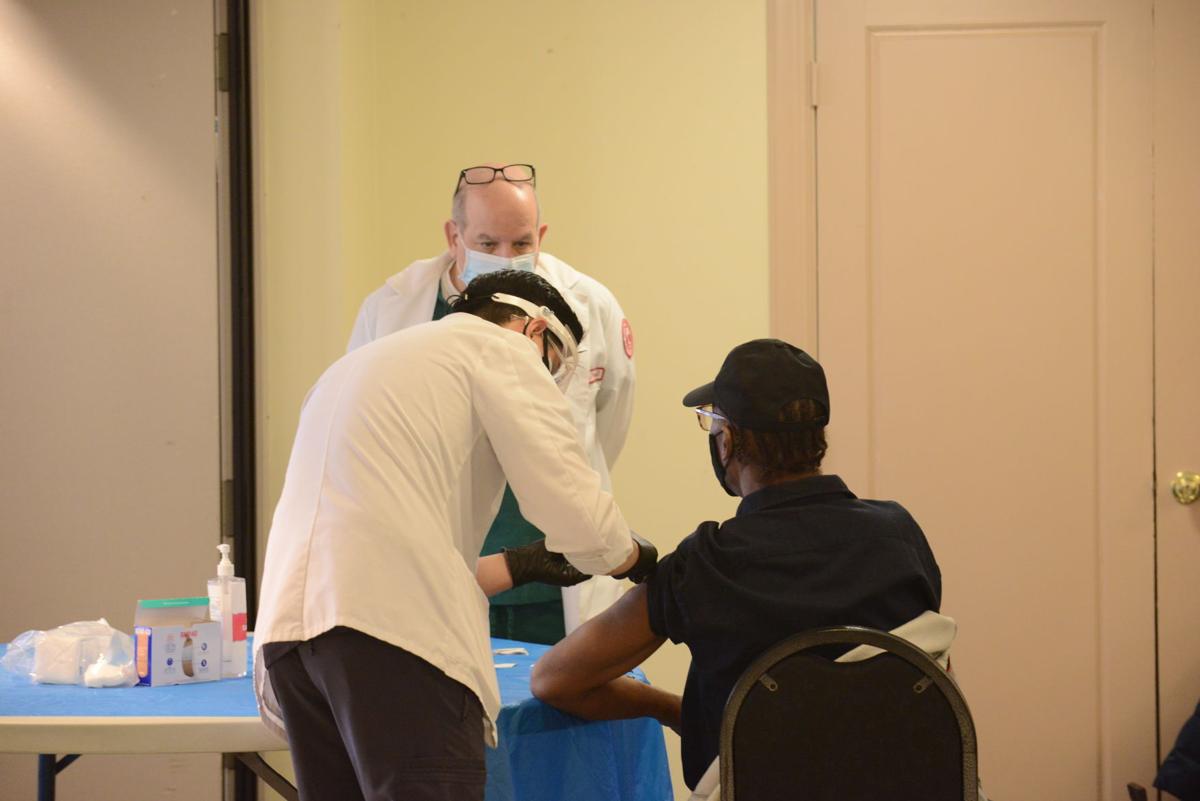 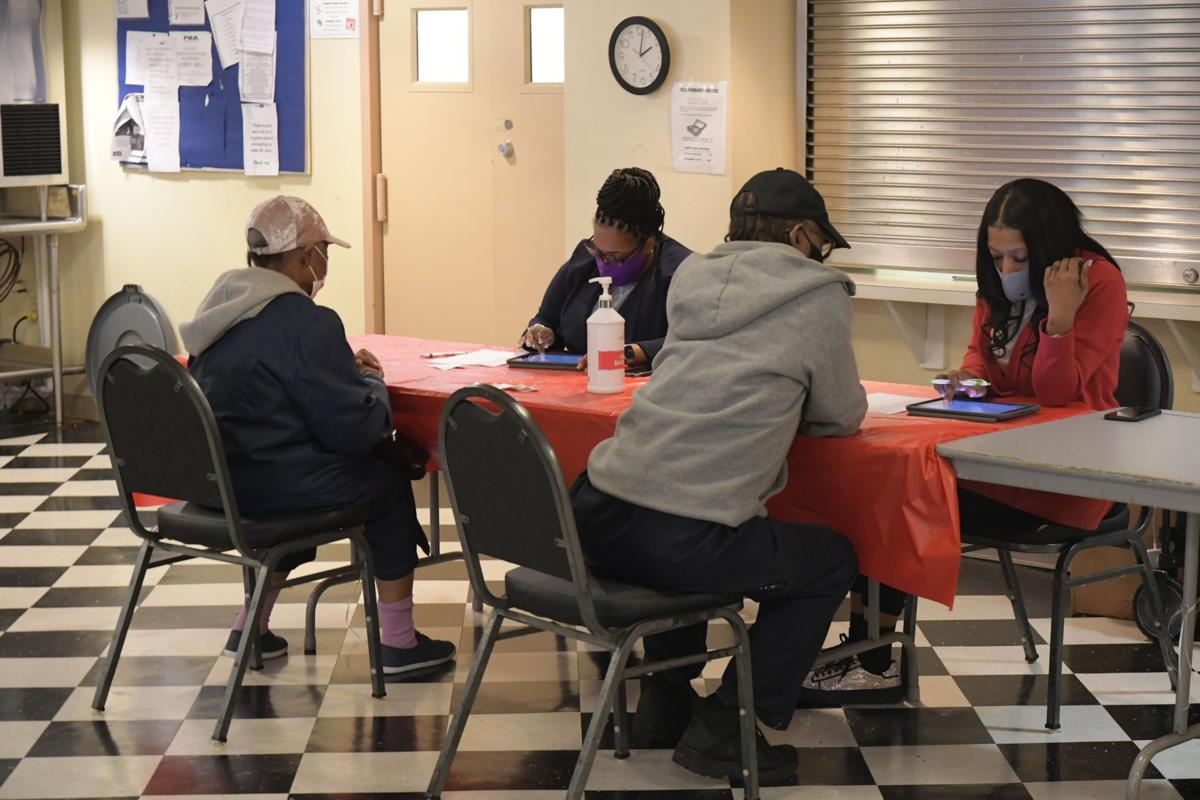 Emlen Arms Apartments resident prepare to be vaccinated during a vaccine clinic held Monday. The clinic is part of the effort to overcome vaccine hesitancy and ensure that as many seniors as possible have access and get the shots easily in their communities. —TRIBUNE PHOTO/ABDUL R. SULAYMAN

Emlen Arms Apartments resident prepare to be vaccinated during a vaccine clinic held Monday. The clinic is part of the effort to overcome vaccine hesitancy and ensure that as many seniors as possible have access and get the shots easily in their communities. —TRIBUNE PHOTO/ABDUL R. SULAYMAN

She was one of almost 90 senior citizens who were vaccinated at Philadelphia Housing Authority’s Emlen Arms Apartments.

The effort was part of an initiative by PHA and Temple University’s College of Public Health to vaccinate residents in high-risk, lower-income neighborhoods against COVID-19.

“This is important,” Quasndy, a 75-year-old New Orleans native, said of the initiative. “It’s really important to the people that live here that are high risk to begin with. It just seems like we just kept getting pushed down on the list of who was going to be served. I’m grateful to PHA because I know that this was their doing.”

After surviving Hurricane Katrina in 2005, Quasndy relocated from New Orleans to Philadelphia where she’s been residing at Emlen Arms for the last 16 years.

She said it’s been difficult calling around to different places only to be told that no appointments were available to obtain a vaccine.

Monday’s clinic was part of an effort to overcome vaccine hesitancy and ensure that as many seniors as possible have access and can receive the shots in their communities.

“I just thought that I should,” he said. “I decided to get ahead of the curve.”

Carter was appreciative of being able to receive the vaccine in the comfort of his apartment building.

“I think it’s wonderful,” he said. “We didn’t have to go way downtown where the lines are around the corner.”

Since February, faculty and trained nursing student volunteers from Temple College of Public Health and the School of Pharmacy have participated in clinics set up to vaccinate residents at PHA’s senior living locations. Thus far, about 600 senior citizens have been vaccinated across PHA’s various senior sites and have received either the Moderna or Pfizer shots.

“PHA serves the most vulnerable people in the city and we’ve done something different that no one else has done,” said Nichole Tillman, a PHA spokesperson.

“We have a different model. PHA staff is going out and knocking on doors and asking residents do you want to come downstairs to be vaccinated.”

She said PHA staff sits down with residents and answers questions about the vaccine process to help address the issue of vaccine hesitancy.

“We know that the Black and brown communities are the ones that are being impacted the most, so we knew that we had to do this type of approach,” Tillman said.

She said they started the program by focusing on PHA’s senior citizen sites and plan to expand the effort to about 10 family sites that serve a large number of seniors.

The program’s focus moving forward will be to increase the numbers of residents receiving the vaccine at each site, and to better understand the reasons why some might be choosing to decline vaccination at this point.

“When the program began, we found through our surveying that 25% of senior residents had already been vaccinated,” said PHA President and CEO Kelvin Jeremiah in a news release. “It’s the remaining 75% that our outreach team is concentrating on now. We understood that it would require this very special level of attention through the volunteer efforts of Temple and our resident leaders.”

“Every site we go to and every day that we’re out there, it seems that more and more folks are wanting to take advantage of getting vaccinated,” said Temple Associate Dean for Clinical Affairs and Interprofessional Education Susan VonNessen-Scanlin.

She said the goal of the PHA and Temple partnership is to make it as easy as possible for residents to be vaccinated through these on-site clinics.

The collaboration includes participation from several Temple departments including the Lewis Katz School of Medicine’s Center for Urban Bioethics, the Lenfest North Philadelphia Workforce Initiative and the Temple Center for Population Health.

These vaccine clinics are part of Temple Health System’s community effort, but the holistic strategy also includes a workforce initiative called PHA Cares. This program, which was created by Temple, hires PHA residents to serve as its community health outreach workers at select PHA housing developments.

“We’ve added to our staff infrastructure to bring on community health workers who are residents, who live in the community and have firsthand experience with the vaccine. They’re part of our door–to-door efforts,” said Makeeda Holley, PHA’s vice president of resident programs and partnerships.

Philadelphia has expanded who qualifies for COVID-19 vaccine

The Black Clergy of Philadelphia and Vicinity has laid out a multifaceted plan to combat the gun violence plaguing the city.

The Black Doctors COVID-19 Consortium has marked a significant milestone, vaccinating more than 25,000 people in 31 days — with 75% being Afri…