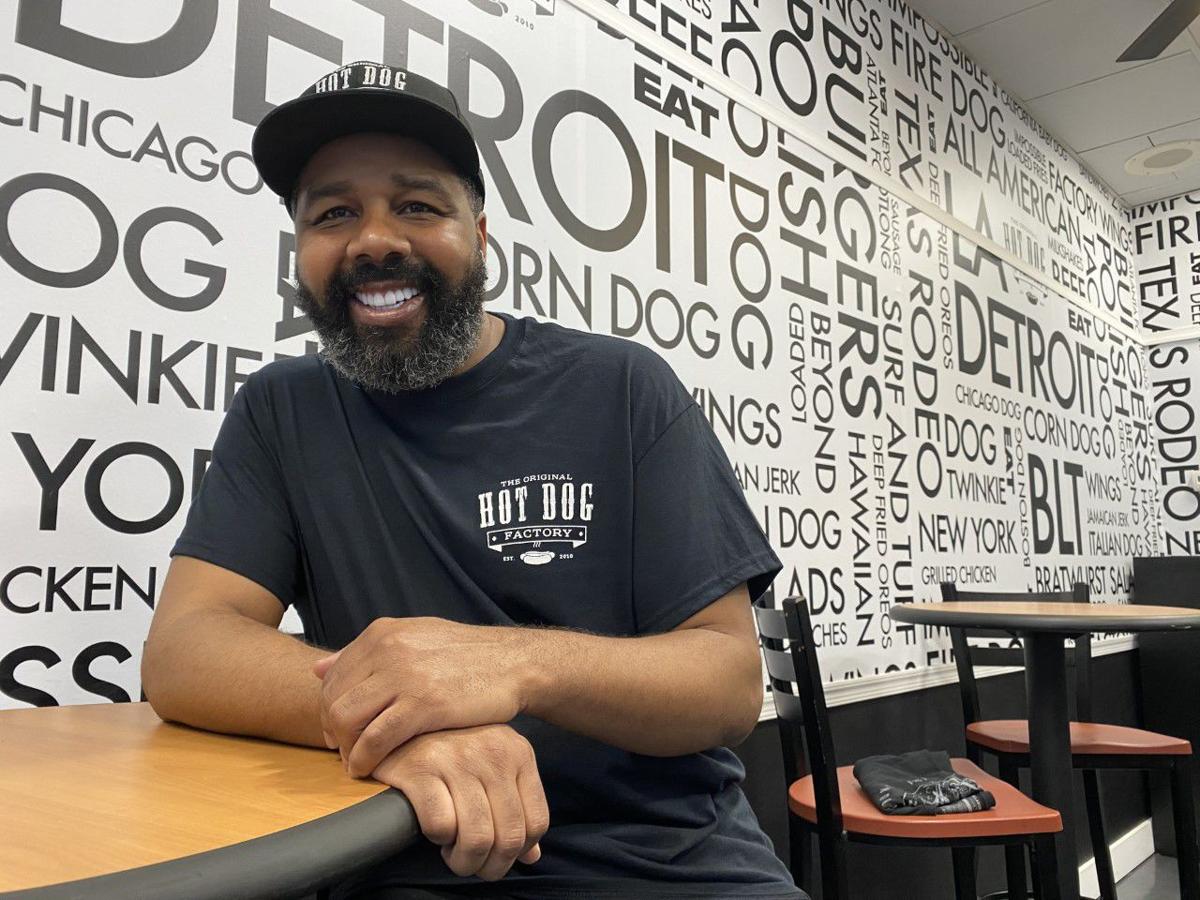 Aaron Anderson is the owner of The Original Hot Dog Factory in Center City. 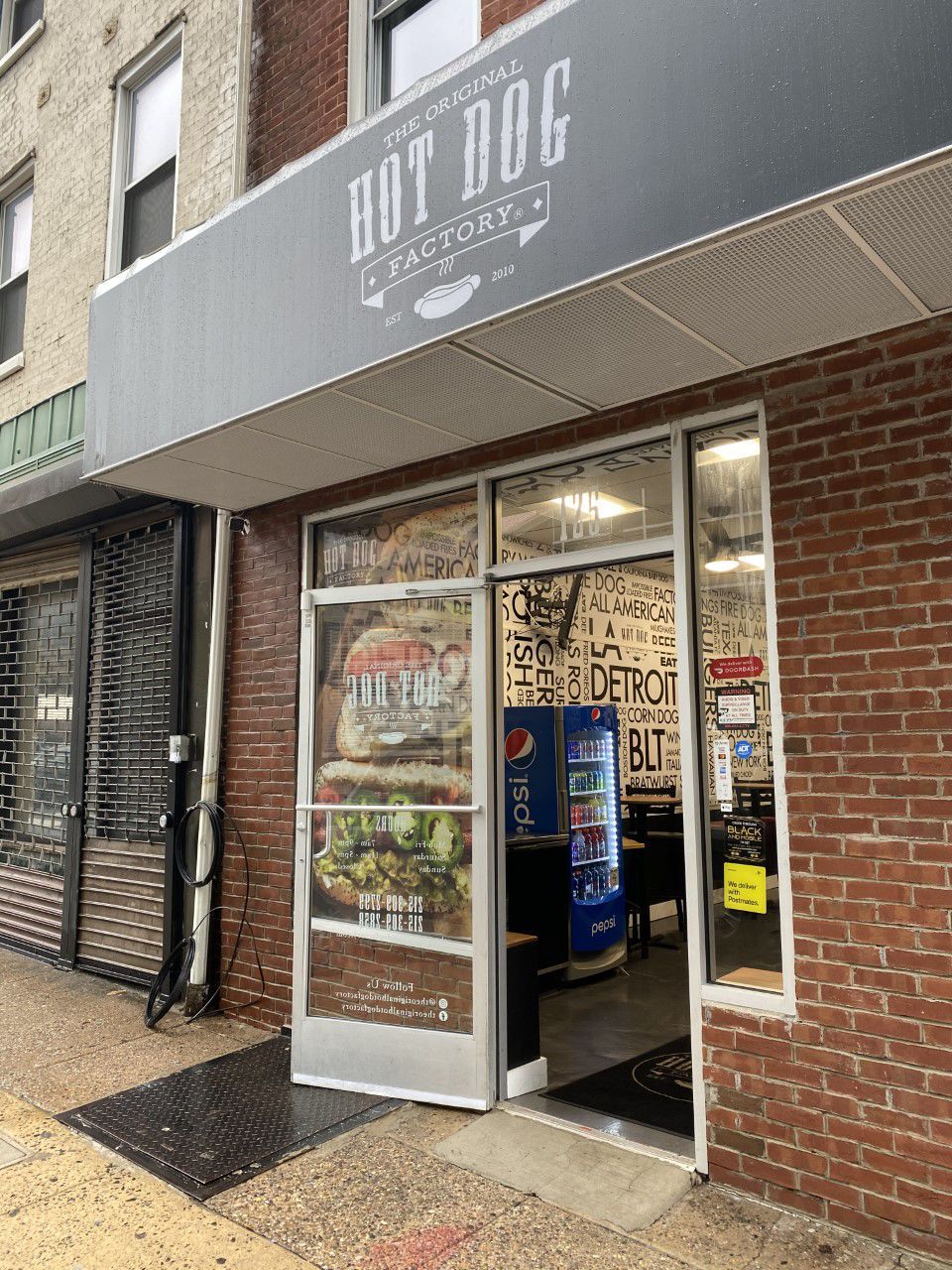 The Original Hot Dog Factory at 125 N. 15th St. had the misfortune of opening on March 25 as the city imposed restrictions on restaurants due to the coronavirus crisis. — Tribune Photo/Abdul R. Sulayman

Aaron Anderson is the owner of The Original Hot Dog Factory in Center City.

The Original Hot Dog Factory at 125 N. 15th St. had the misfortune of opening on March 25 as the city imposed restrictions on restaurants due to the coronavirus crisis. — Tribune Photo/Abdul R. Sulayman

Aaron Anderson did not let the coronavirus pandemic deter him from bringing the first Original Hot Dog Factory restaurant to Philadelphia.

When the entrepreneur set his opening date for March 25, he anticipated receiving a high volume of walk-in customers from City Hall and nearby businesses.

But then the coronavirus crisis struck the nation. And 10 days before Anderson opened his shop, Mayor Jim Kenney ordered all non-essential businesses to close and said restaurants could only stay open for take-outs and deliveries.

“I pretty much had to pivot the way that I opened,” Anderson said. “It definitely impacted the business for sure, but it didn’t impact it to where it discouraged me. If there is a will, there is a way.”

Anderson fed first responders from the area, including police officers and medical personnel, during his first two weeks in operation. He also delivered food to 150 Ronald McDonald House families on April 2.

The Original Hot Dog Factory franchise started in 2010 outside of Smyrna, Georgia. The chain received national attention due to appearances on “The Real Housewives of Atlanta” show.

“Once I came across the Hot Dog Factory, I looked at everything that it offered and I looked at Philadelphia itself and I said there is nothing like it here and I figured that it will be a great market for it,” said Anderson, who invested more than $100,000 into becoming a franchise owner.

“Everybody loves a good hot dog.”

The restaurant serves up 20 specialty hot dogs, fries, hamburgers, chicken wings and desserts like fried Oreos and funnel cakes. Some of Anderson’s top sellers include the All American (a classic beef dog topped with ketchup, mustard, relish and onions), the Jamaican Jerk Chicken dog (a jerk-seasoned chicken hot dog topped with pineapples and a sweet island sauce), and the Surf and Turf (a grilled hot dog dressed with lump meat crab meat, lettuce and tomato and a sauce).

The coronavirus crisis has also impacted Anderson’s ability to operate other new locations at the Bourse Food Hall in Philadelphia and the Subaru Park stadium in Chester, where the Philadelphia Union soccer team plays. He was also planning a fourth restaurant in Philadelphia’s Fishtown neighborhood, but construction has been halted on that site.

“I’m just using this time to plan and strategize, gain some traction and let everybody know that we’re here,” Anderson said.

Prior to tapping into franchising, Anderson owned a screen printing company — Union Printing — for 13 years. His ultimate goal is to open 20 restaurants in Philadelphia and South Jersey.

Burying loved ones in the time of coronavirus

SEATTLE — Before stay-at-home orders are lifted, the nation's public health agencies want to be ready to douse any new sparks of coronavirus i…

The outbreak of the coronavirus has dealt a shock to the global economy with unprecedented speed. Following are developments Thursday related …

NEW YORK — The government's lending program for small businesses is on hold.

A group of African-American organizations is calling for decisive government action amidst the coronavirus pandemic in a letter released Tuesday.