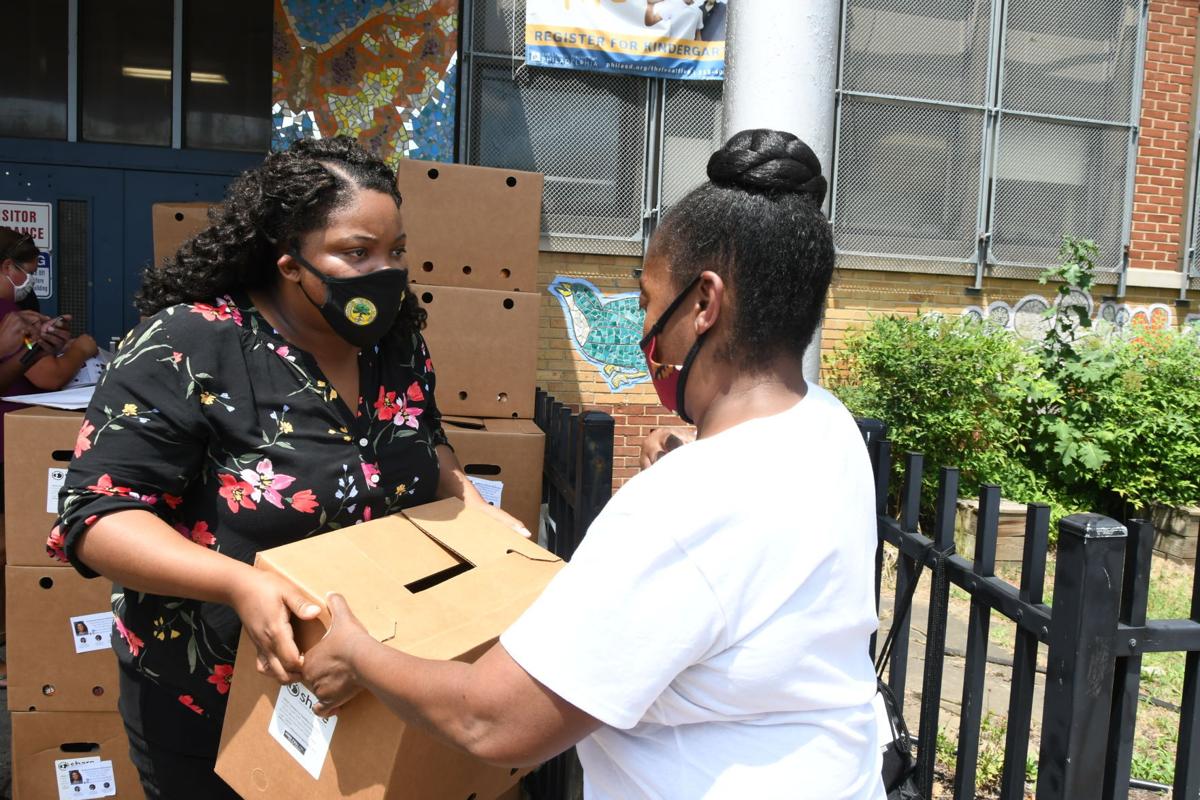 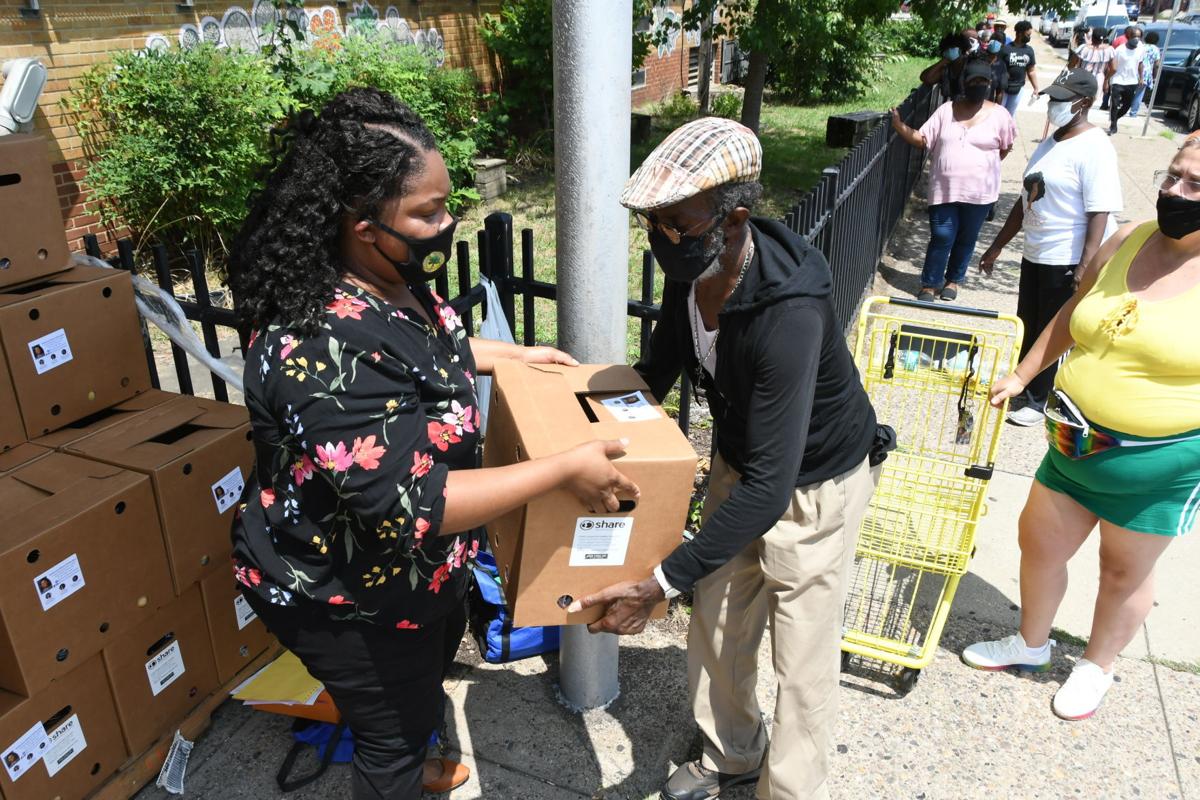 Kim Parker stood in line outside the Gideon Edward School under the hot summer sun waiting for boxes of free food on Thursday.

But Parker, 53, counted herself as “blessed.”

She still had her job, although her full-time hours as a cook at a grab-and-go health-food chain have been slashed and fluctuate from week to week due to the novel coronavirus pandemic. The North Philadelphia resident has a pair of adult children to help her make ends meet, too.

The weekly food pantry supplements Parker and her household, which includes her daughter and mother. She gives away some of the food to those in need around the Strawberry Mansion neighborhood.

“The struggle is real” in the community, Parker said. “We’re going to be a family, a collective unit, and do it together.”

Parker was among the first two dozen people to receive boxes of fresh vegetables and breaded chicken thighs and drumsticks at the Community School on the 2800 block of West Glenwood Avenue.

At-large City Councilwoman Katherine Gilmore Richardson said the pop-up pantry was one of two weekly food giveaways in North Philadelphia she organized with a handful of city and state officials and Share Food Program, one of the region’s largest hunger-fighting agencies. Other council members have organized similar food giveaways in recent weeks.

Since mid-May, the pantries headed by Richardson and other officials have distributed approximately 10,000 pounds of food a week, which Richardson said highlighted the great need in the area.

“This community has a high rate of poverty and we need to ensure we are helping them with access to fresh foods,” Richardson said.

Since the first case of COVID-19 appeared in Philadelphia in March, food insecurity in the city and region has grown significantly, said Samantha Retamar, a spokeswoman for Philabundance, the region’s largest food relief organization.

And leaders of Philabundance believe that need will continue to grow in the fall and winter months, Retamar said.

Philabundance has distributed 80% more food as of Thursday than it did by the same date last year, Retamar said. The organization is on track to give out an average of 2.25 million pounds of food a month compared to 1.25 million pounds a month prior to the pandemic.

The pandemic has created a tsunami of challenges: Rising unemployment, students missing free meals at schools as the district closed buildings and switched to remote learning, and food price hikes.

“There’s just a lot that’s contributing to the picture of this growing food insecurity,” Retamar said.

Richardson said her weekly food pantries have attracted a lot of individuals seeking assistance for the first time, especially in the middle-class neighborhood of Wynnefield.

In June, Pennsylvania’s seasonally adjusted unemployment rate was 13%, coming in higher than the national rate (11.1%), according to federal figures released on Thursday.

The number of new jobless claims is on the rise nationwide but declined in the state.

Last week, 37,986 Pennsylvanians filed initial unemployment claims, down from 44,798 the previous week, according to state data.

A total of 3.4 million Pennsylvanians continued to receive federal Pandemic Unemployment Assistance through July 4, according to federal data. That temporary program, which includes $600 in supplemental weekly unemployment payments, is set to expire at the end of this month.

As Congress continues to hash out another coronavirus stimulus plan, the future of the federal boost in weekly unemployment benefits remains uncertain.

Richardson said the loss of the $600 bump in weekly benefits would be “huge” and called on federal officials to extend it.

“It is really helping individuals to supplement their loss in income during this unprecedented time in our history,” Richardson said. “It is a lifeline for most people.”

Philabundance, which distributes food to its network of approximately 350 agencies, has seen demand increase by 50% to 60% in traditionally food-insecure areas, like Philadelphia and Camden County, New Jersey, and around 30% in more well-off suburban areas since March, Retamar said.

Food agencies also have scrambled to purchase more refrigeration units to manage the increase in demand for food.

To help manage that increased need in Philadelphia, Philabundance has partnered with the city and other agencies to open food-distribution sites in the city. Before the pandemic, 1 in 5 city residents were food-insecure in Philadelphia, the poorest large city in the nation.

The pandemic has negatively affected the food supply chain and donations, too.

A combination of manufacturing costs and “panic buying” has led to price hikes for and scarcity of shelf-stable items, including pasta, marinara sauce, rice and beans, Retamar said. Philabundance also has seen a drop in food donations from grocery stores, a once dependable and reliable source of food.

“We’ve lost a whole network of donations from our grocery partners,” Retamar said. “They still try and give what they can but it’s not the sheer amount that they used to provide.”

While monetary donations have fallen off in recent months, Philabundance is shelling out more to purchase food. The organization has bought $4.1 million worth of food so far this fiscal year, which ends in September for the organization, compared to a total of $1.4 million for all of last year.

“It’s a marathon for us right now,” Retamar said about handling the increased need and other challenges. “We didn’t expect this [pandemic] to be going on as long as it has.”

Back at the pantry outside Gideon Edward School, Gregory Wright was helping distribute boxes of food. As Community School coordinator, Wright has seen firsthand the issues plaguing the neighborhood — poverty, crime, gun violence.

Wright recalled that a weekly student-run pantry was held at the school year-round before the pandemic shut down everything. During those student giveaways, food was always leftover and people trickled in for hours.

That was then. The 500 boxes of food at the current pantry are typically gone within an hour, Wright said.

“[The coronavirus pandemic] has highlighted the need that was already there and just exacerbated it,” Wright said. “So, no, I don’t think the need is going to go down soon.”

On Saturday, April 25, Pennsylvania Health Secretary Rachel Levine stepped to the podium to address the media at her daily coronavirus press b…

With its hand forced by the coronavirus pandemic, the School District of Philadelphia may push high school start times back as far as 9:30 a.m.

About 40% of renter households in New Jersey — some 450,000 households across the state — will be unable to afford rent for August due to the …

Indoor dining at Philadelphia restaurants is officially canceled for the summer.