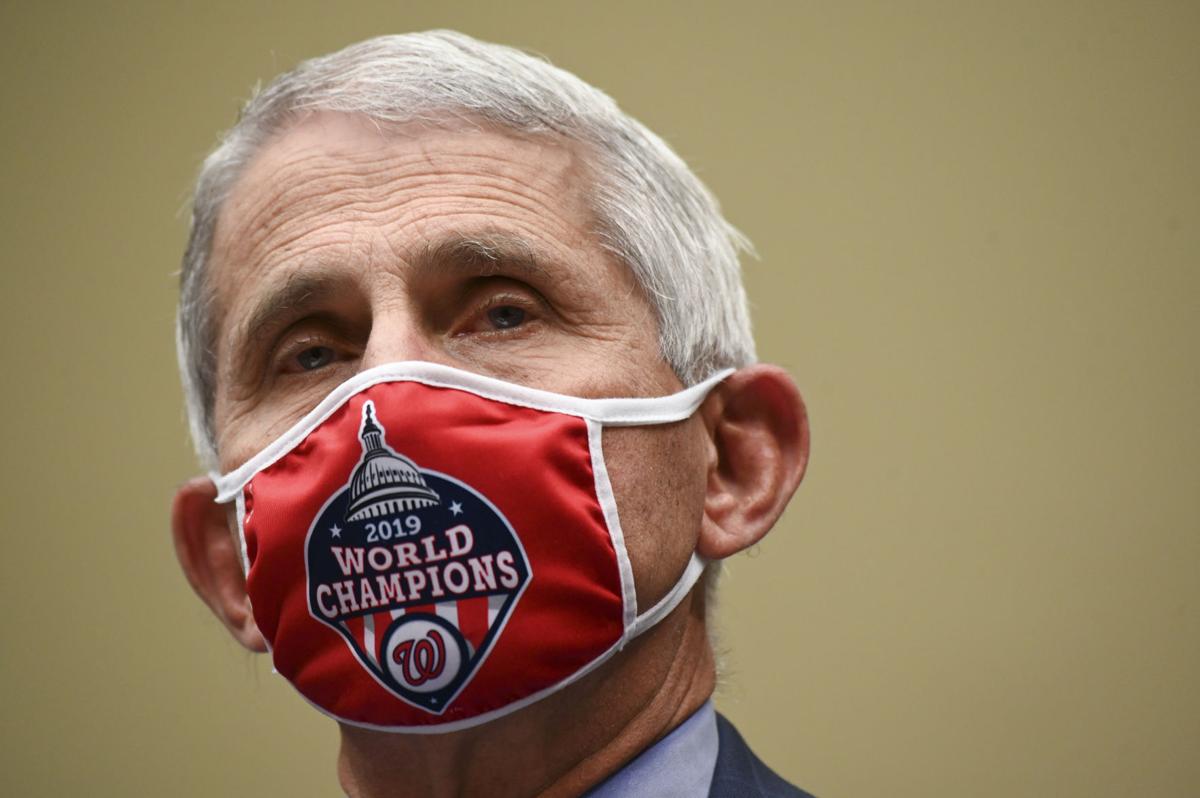 Dr. Anthony Fauci, director of the National Institute for Allergy and Infectious Diseases on Friday on Capitol Hill in Washington. 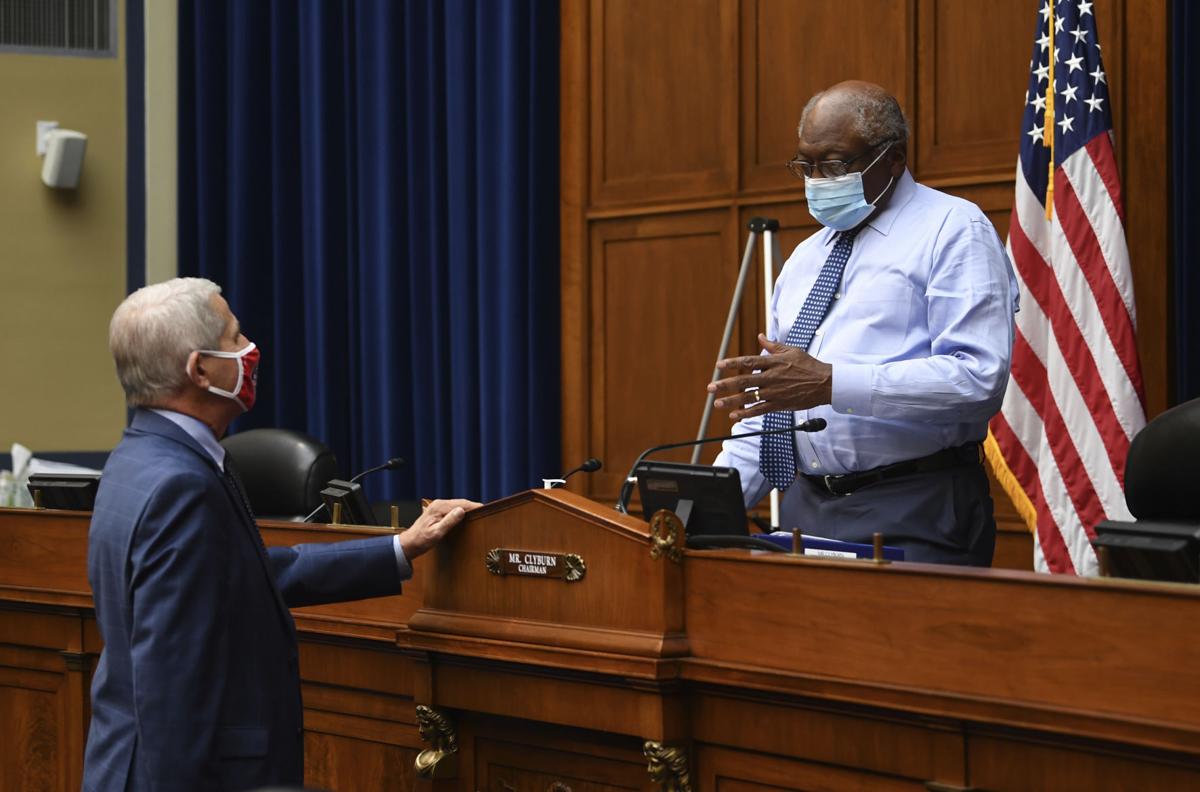 Dr. Anthony Fauci, director of the National Institute for Allergy and Infectious Diseases, left, talks with Committee chairman Rep. James Clyburn, D-S.C., as he arrives to testify before a House Subcommittee hearing on the Coronavirus crisis, Friday on Capitol Hill in Washington. -Kevin Dietsch/Pool via AP

Dr. Anthony Fauci, director of the National Institute for Allergy and Infectious Diseases on Friday on Capitol Hill in Washington.

Dr. Anthony Fauci, director of the National Institute for Allergy and Infectious Diseases, left, talks with Committee chairman Rep. James Clyburn, D-S.C., as he arrives to testify before a House Subcommittee hearing on the Coronavirus crisis, Friday on Capitol Hill in Washington. -Kevin Dietsch/Pool via AP

WASHINGTON — Dr. Anthony Fauci said Friday that he remains confident that a coronavirus vaccine will be ready by early next year, telling lawmakers that a quarter-million Americans already have volunteered to take part in clinical trials.

But if the future looks encouraging, public health alarms are still going off in the present. Officials testifying with Fauci at a contentious House hearing acknowledged that the U.S. remains unable to deliver all COVID-19 test results within two or three days, and they jointly pleaded with Americans to comply with basic precautions such as wearing masks, avoiding crowds, and washing their hands frequently.

Those simple steps can deliver “the same bang for the buck as if we just shut the entire economy down,” said a frustrated Dr. Robert Redfield, director of the Centers for Disease Control and Prevention, adding that he has studies to back that up.

Looking ahead, Fauci said he’s “cautiously optimistic that we will have a vaccine by the end of this year and as we go into 2021. I don’t think it’s dreaming ... I believe it’s a reality (and) will be shown to be reality.” As the government’s top infectious disease expert, Fauci heads the National Institute of Allergy and Infectious Diseases.

Under White House orders, federal health agencies and the Defense Department are carrying out a plan dubbed Operation Warp Speed to deliver 300 million vaccine doses on a compressed timeline. That will happen only after the Food and Drug Administration determines that one or more vaccines are safe and effective. Several candidates are being tested.

Don’t look for a mass nationwide vaccination right away, Fauci told lawmakers. There will be a priority list based on recommendations from scientific advisers. Topping the list could be critical workers, such as as medical personnel, or vulnerable groups of people such as older adults with other underlying health problems.

“But ultimately, within a reasonable period of time, the plans now allow for any American who needs a vaccine to get it within the year 2021,” Fauci said.

Fauci, Redfield, and Department of Health and Human Services “testing czar” Admiral Brett Giroir testified at a moment when early progress against the coronavirus seems to have been frittered away. High numbers of new cases cloud the nation’s path. The three officials appeared before a special House panel investigating the government’s pandemic response, itself sharply divided along party lines.

Nearly 4.5 million Americans have been infected with COVID-19, and more than 150,000 have died. In recent weeks the virus has rebounded in the South and West, and now upticks are being seen in the Midwest. Testing bottlenecks remain a major issue.

Asked if it’s possible to deliver coronavirus test results to patients within 48 to 72 hours, Giroir acknowledged “it is not a possible benchmark we can achieve today given the demand and supply.”

But rapid, widespread testing is critical to containing the pandemic. It makes it easier for public health workers to trace the contacts of an infected person. Delayed test results only allow more people to get infected.

Giroir said a two- to three-day turnaround “is absolutely a benchmark we can achieve moving forward.”

While hospitals can generally deliver in-house test results within 24 hours, large commercial labs that do about half the testing for the country take longer, particularly if there’s a surge in new cases.

The latest government data shows about 75% of test results are coming back within 5 days, but the remainder are taking longer, Giroir told lawmakers.

The bitter politics surrounding the U.S. response to the coronavirus was evident at the hearing by the House Select Subcommittee on the Coronavirus Crisis.

As the health officials were testifying, President Donald Trump in a tweet repeated a false claim that high numbers of U.S. cases are due to extensive testing. Committee Chairman James Clyburn, D-S.C., tried to enlist Fauci to rebut the president.

And Rep. Jim Jordan, R-Ohio tried to press Fauci into saying that demonstrations against police violence toward Black Americans spread the virus and should be curbed. Fauci didn’t bite.

“You make all kinds of recommendations,” Jordan said, taking aim at Fauci. “You made comments on dating, baseball, and everything you can imagine ... I’m just asking should we try to limit the protesting?”

Fauci said it’s not his role to opine on curbing political protests. But Jordan shot back, noting that church services have been shut down due to virus precautions, and implying that Fauci has a double standard on two First Amendment rights, religious liberty and freedom of expression.

“I’m not favoring anybody over anybody,” Fauci answered. “And I don’t judge one crowd versus another crowd. When you’re in a crowd, particularly if you’re not wearing a mask, that induces the spread.”

During the hearing Clyburn had displayed a chart showing rising cases in the U.S. juxtaposed with lower levels across Europe. That caught the president’s eye.

Trump tweeted: “Somebody please tell Congressman Clyburn, who doesn’t have a clue, that the chart he put up indicating more CASES for the U.S. than Europe, is because we do MUCH MORE testing than any other country in the World.”

Clyburn turned to Fauci for a real-time fact check.

“Now Dr. Fauci,” the chairman intoned, “do you agree with the president’s statement, or do you stand by your previous answer that the difference is caused by multiple factors including the fact that some states did not do a good job of reopening?”

“I stand by my previous statement that the increase in cases was due to a number of factors,” he said. One was “that in the attempt to reopen, that in some situations, states did not abide strictly by the guidelines that the task force and the White House had put out.”