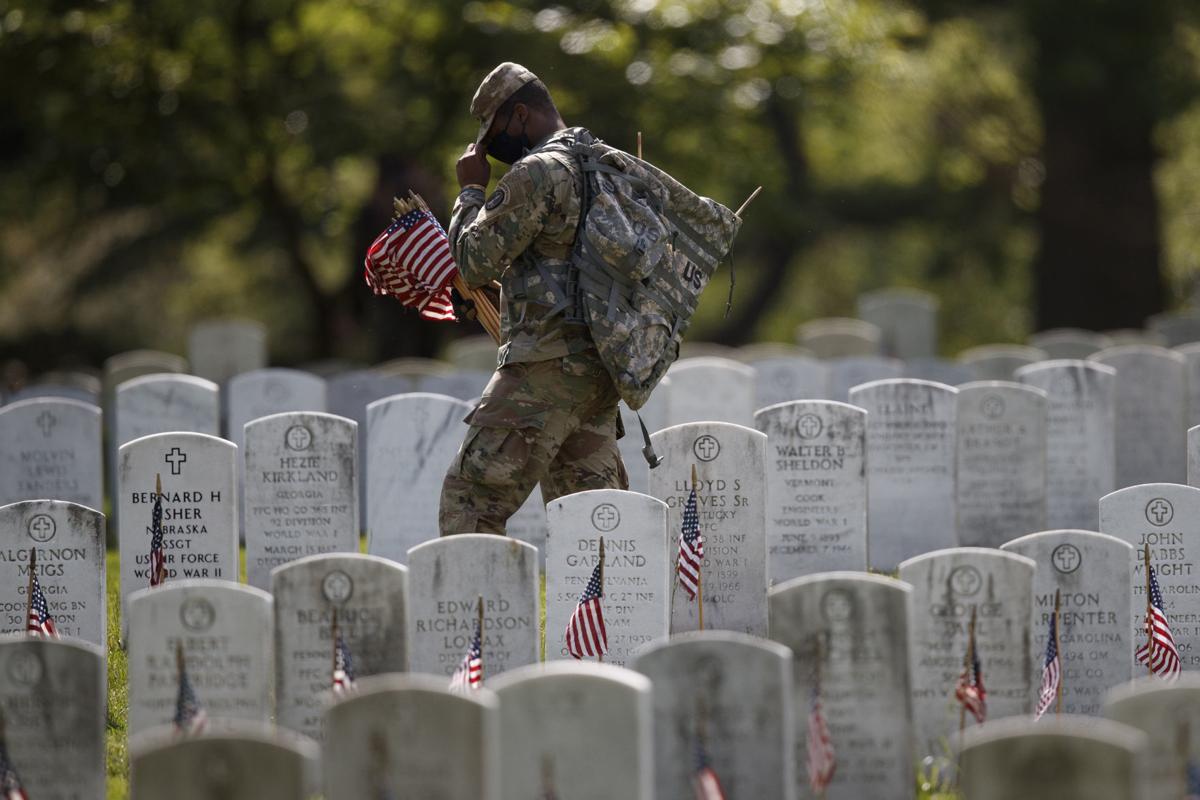 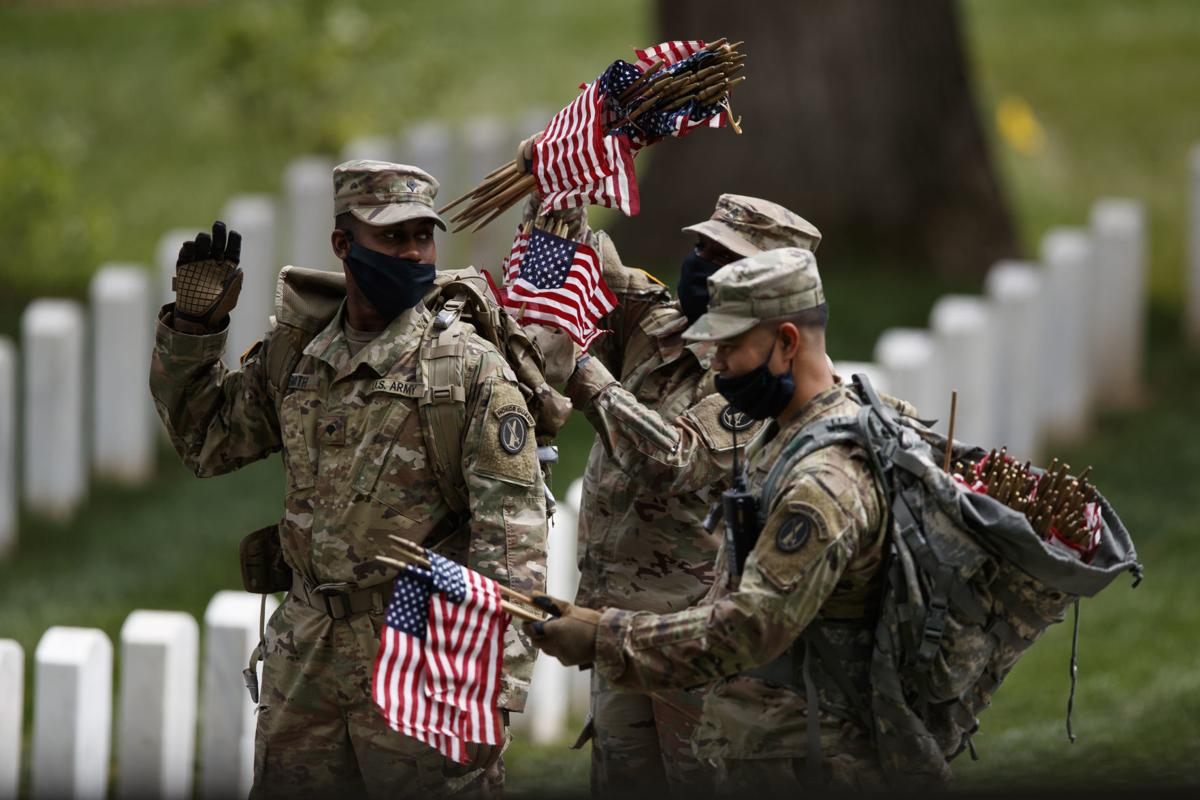 Members of the 3rd U.S. Infantry Regiment, also known as The Old Guard, wear face masks as they gather bundles of flags to place them in front of each headstone for “Flags-In” at Arlington National Cemetery in Arlington, Va., Thursday, to honor the Nation’s fallen military heroes. — AP Photo/Carolyn Kaster

Members of the 3rd U.S. Infantry Regiment, also known as The Old Guard, wear face masks as they gather bundles of flags to place them in front of each headstone for “Flags-In” at Arlington National Cemetery in Arlington, Va., Thursday, to honor the Nation’s fallen military heroes. — AP Photo/Carolyn Kaster

Millions of Americans are set to emerge from coronavirus lockdowns and take tentative steps outdoors to celebrate Memorial Day weekend at beaches, cookouts and family gatherings, raising concern among public health officials that large gatherings could cause outbreaks to come roaring back.

Medical experts warn that the virus won’t take a holiday for the traditional start of summer. The Centers for Disease Control and Prevention continues to recommend that people stay home, avoid crowds and connect with family and friends by phone or video chat.

Dr. Seth Cohen, an infectious disease expert at the University of Washington Medical Center-Northwest in Seattle, advised that people who do celebrate keep their distance from one another, wear masks and avoid sharing food and drinks.

“Punch bowls. Nachos. These things are a no-no,” Cohen said.

The holiday weekend arrives amid the bleakest economy in decades. Tens of millions of people have been thrown out of work since the virus hit hard in March and forced businesses, including many popular summer destinations, to shut down at least temporarily. Unemployment has reached its highest level since the Great Depression, and on Thursday, Federal Reserve Chair Jerome Powell warned that prospects for a recovery will remain unclear until the health crisis is solved.

Many long-running Memorial Day commemorations of the nation’s fallen military heroes have been canceled or downsized, including concerts and fireworks shows. Parks, beaches, campgrounds and swimming pools remain closed in much of the country.

But plenty of popular public spaces will be open — with restrictions.

In Virginia Beach, Virginia, the famed 40-block boardwalk and sandy shoreline is open beginning Friday, but people must stay 6 feet from non-family members, with groups limited to 10 or fewer. Group sports such as volleyball will be prohibited, along with tents and alcohol consumption.

Mayor Bobby Dyer said about 150 “beach ambassadors” in red shirts will be deployed to “diplomatically” ask people to follow the rules.

In the absence of clear federal guidance, it’s largely been left to state and local officials to figure out how to celebrate the holiday safely. Social-distancing rules and bans on mass gatherings remain in place throughout much of the country.

Keeping holidays safe is a quandary is faced by authorities around the globe. On the same weekend as Memorial Day, the Muslim world will mark the fast-breaking festival Eid al-Fitr. On Monday, U.K. residents get a bank holiday.

Dr. William Schaffner, an infectious diseases expert at Vanderbilt University, warned that being on holiday can lead some people to drop their guard and “just relax into their pre-COVID behaviors.”

“They forget to wear masks” Schaffner said. “They’re not so keen on 6-foot distancing.”

On the Jersey Shore, beaches will be open but with social distancing mandatory. There will be no fireworks, Ferris wheel rides, roller coasters, go-karts or boardwalk arcade games. Atlantic City’s casinos remain closed.

Some locals plan to sit this summer out, fearful that visitors from harder-hit areas such as New York City might bring the virus with them.

“The unfortunate thing is that all the out-of-town people have been cooped up the same amount of time that the locals have been here,” said Christine Barthelme of Point Pleasant, New Jersey. “My family will do mostly what we do on every holiday weekend here: relax in our backyard, have a barbecue and light the fire pit.”

Beaches, hotels and restaurants remain largely shut down in South Florida, another popular holiday destination. The annual Urban Beach Week festival, which typically draws tens of thousands to Miami Beach for a series of hip-hop and reggae shows, was called off for this Memorial Day.

“We saw what happened in early March with spring break crowds,” Miami Beach Mayor Dan Gelber said, recalling the raucous scenes of young people partying in close quarters despite the burgeoning pandemic. “We will do what we need to if there’s crowds. It’s not a good thing to have in a pandemic.”

But up the coast in Palm Beach County, which is home to President Donald Trump’s Mar-a-Lago resort, officials were preparing for beachgoers to hit the sand over Memorial Day.

“Our ocean lifeguards and other parks staff will be monitoring the beaches and reminding park users to practice social distancing,” said Chris Korbelak, public engagement manager for the county parks department.

Theme parks are closed at Walt Disney World and Universal Orlando, but both have reopened their entertainment and restaurant complexes. Guests can expect mandatory mask usage, hand-sanitizing stations and other measures.

For a tourism and hospitality industry hit hard by the pandemic, there is modest hope that Memorial Day will mark the start of a return to something resembling recovery.

“This weekend is an early indicator as to how consumers feel about coming back and partaking in normal social behavior,” said Jason Guggenheim of Boston Consulting Group, which has surveyed consumers and sees pent-up demand for travel.

The data and consulting firm Tourism Economics projects that U.S. travelers will spend $4.2 billion this Memorial Day, compared with $12.3 billion spent over the weekend last year.

Airlines, meanwhile, have largely written off any hope of a quick rebound. Air travel in the U.S. remains down about 90% from a year ago, according to Transportation Security Administration figures.

One of those willing to fly this week was Oklahoma resident Seth Rott, who got on a plane for the first time since the pandemic to visit a friend in Washington, D.C., for Memorial Day. Rott said he had little concern about social distancing at 30,000 feet or the cleanliness of the plane, given airlines’ aggressive measures against the virus.

“I think that there’s a lot of trepidation across the country,” he said. “And I think it will probably be the easiest flight that I’ve ever had just because of a lack of traffic.”

But for most who leave home, it will be by automobile and for relatively short excursions to places like Washington state’s Mt. Baker-Snoqualmie National Forest, where most trailheads have reopened.

“We’re expecting a bottleneck at some of the popular trails,” spokesman Colton Whitworth said, “especially the lower-elevation ones closer to Seattle.”

Shaun Gilmer of Pleasant Grove, Alabama, went to a friend’s lake house for what at times felt like a normal summer getaway, with boat rides and a cookout. But going into town to buy meat brought a reminder the pandemic isn’t over.

“First thing ... there’s a sign at the store we’re trying to go into that masks are required,” Gilmer said. “It was kind of like a quick wake-up call.”