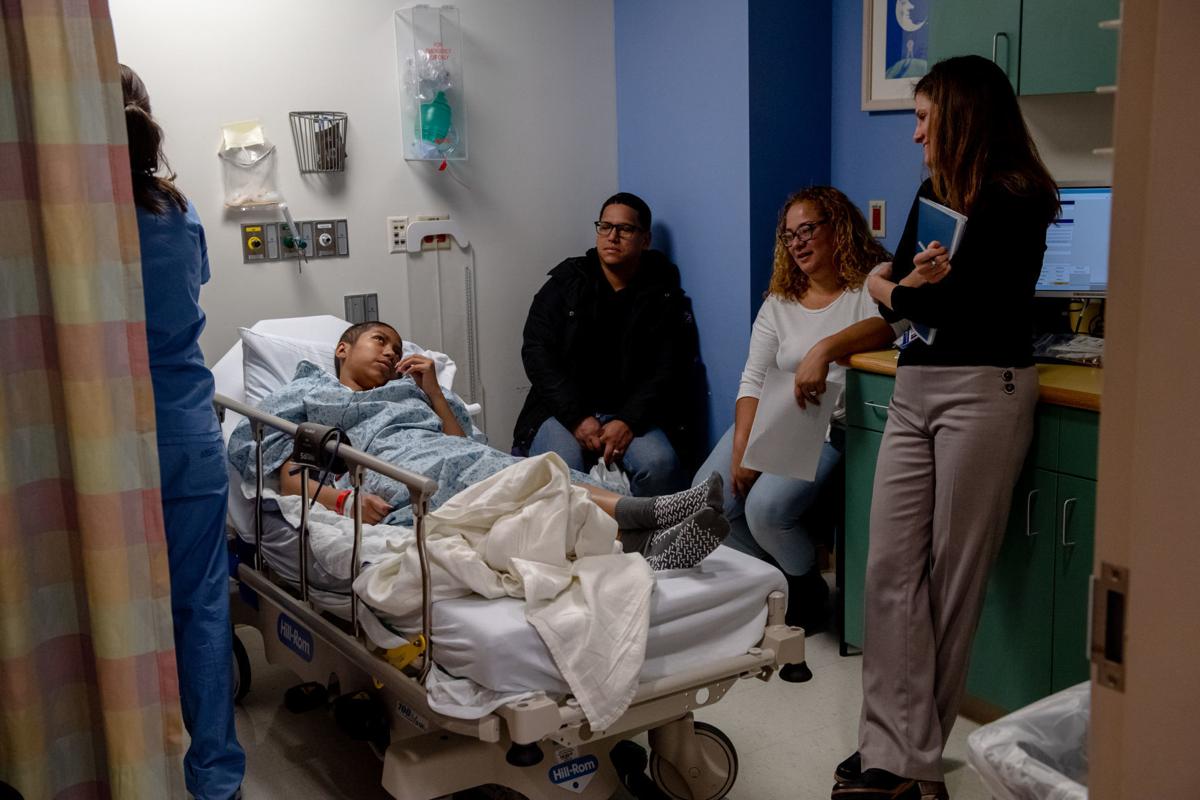 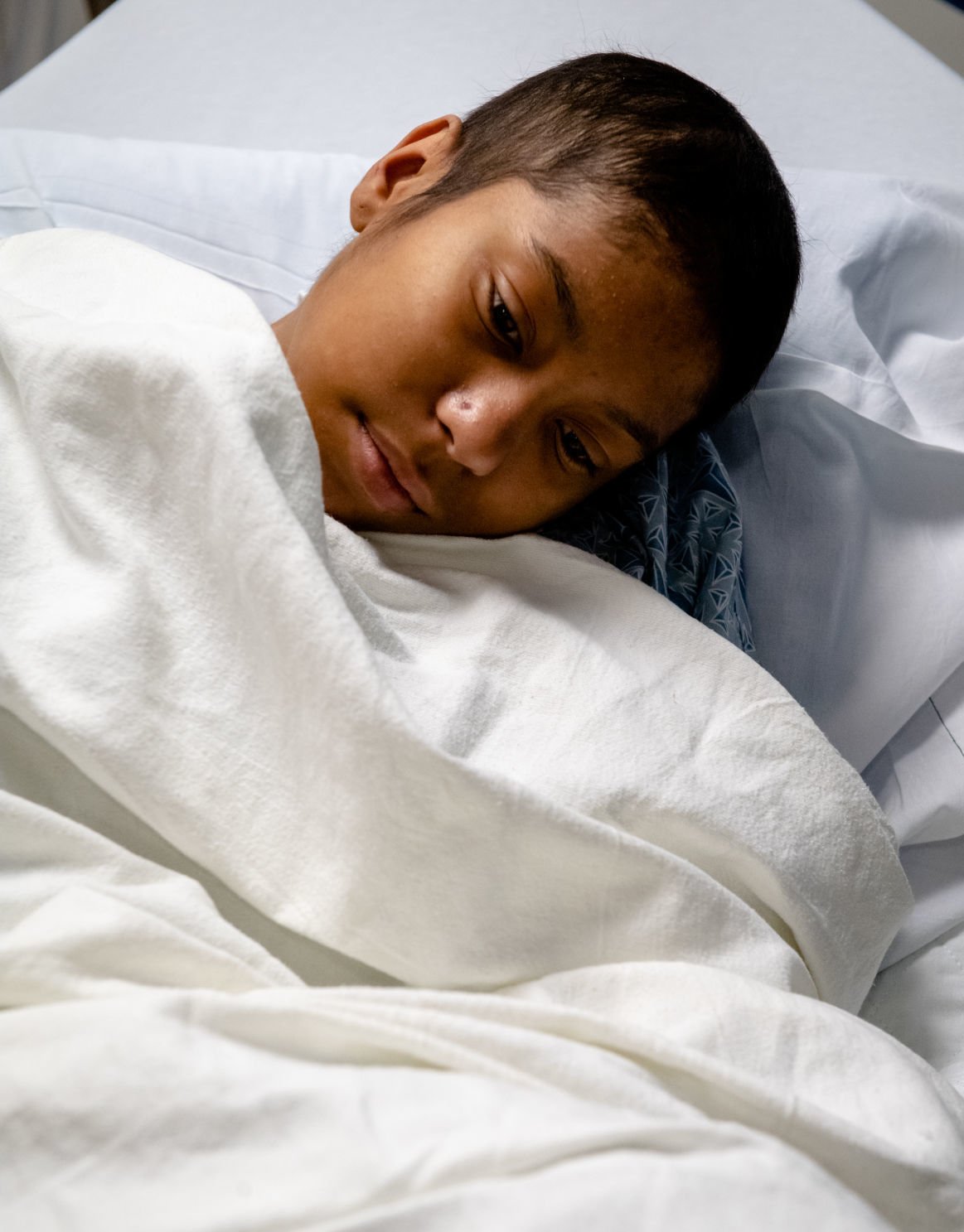 Helen Obando, the youngest person ever to receive a gene therapy for sickle cell anemia, awaits a surgery in Boston last month. Experts say research into sickle cell disease has been hindered by chronic underfunding, in part because a vast majority of the those who suffer from it are African or of African descent, often poor or of modest means. 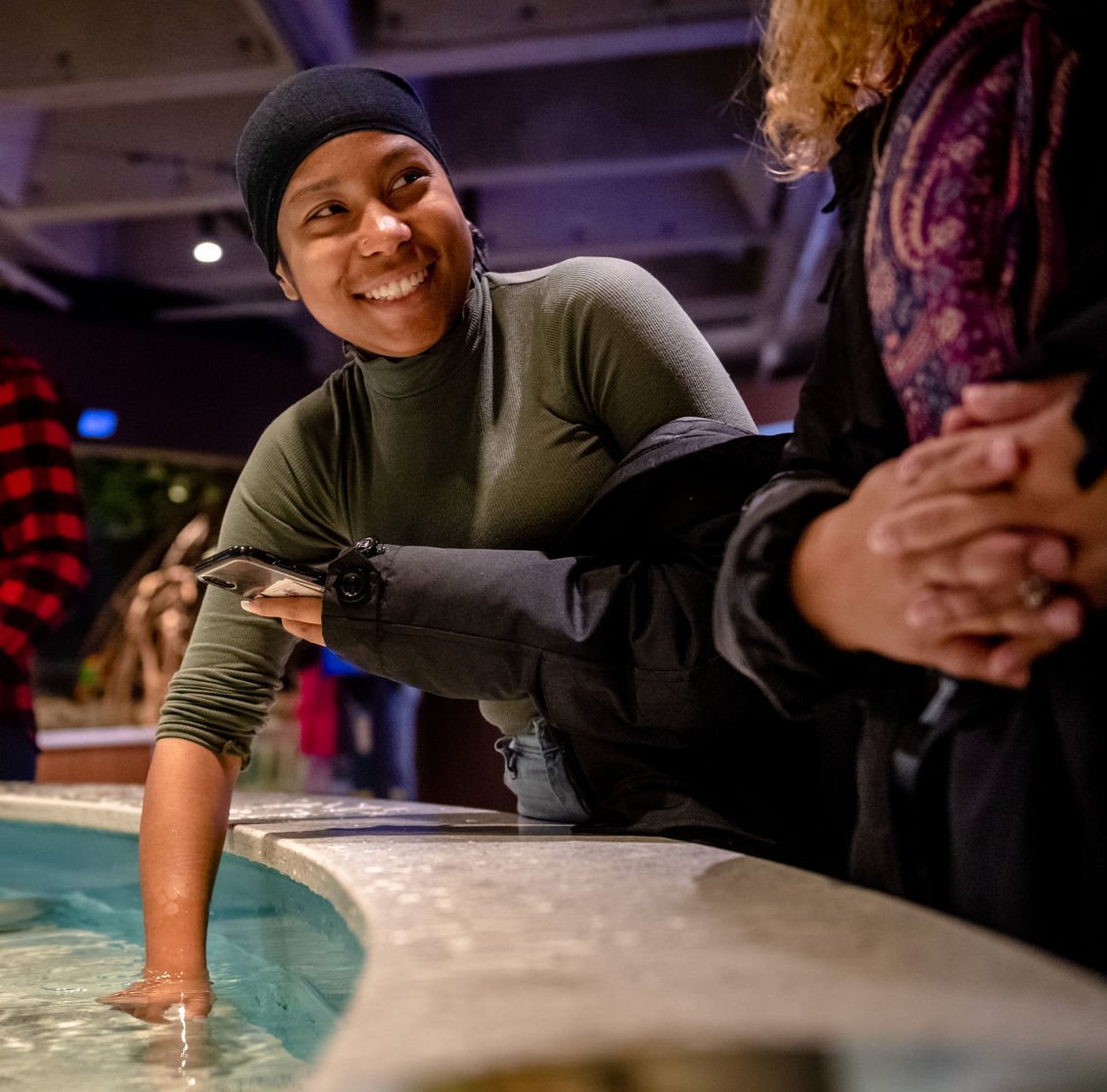 Helen Obando, the youngest person ever to receive a gene therapy for sickle cell anemia, visits the New England Aquarium in Boston.

Helen Obando, the youngest person ever to receive a gene therapy for sickle cell anemia, awaits a surgery in Boston last month. Experts say research into sickle cell disease has been hindered by chronic underfunding, in part because a vast majority of the those who suffer from it are African or of African descent, often poor or of modest means.

Helen Obando, the youngest person ever to receive a gene therapy for sickle cell anemia, visits the New England Aquarium in Boston.

BOSTON — Helen Obando, a shy slip of a girl, lay curled in a hospital bed in June waiting for a bag of stem cells from her bone marrow, modified by gene therapy, to start dripping into her chest.

The hope was that the treatment would cure her of sickle cell disease, an inherited blood disorder that can cause excruciating pain, organ damage and early death.

Helen, who at 16 was the youngest person ever to undergo the therapy, was sound asleep for the big moment.

It was a critical moment in medical science.

For more than a half-century, scientists have known the cause of sickle cell disease: A single mutation in a gene turns red blood cells into rigid crescent or sickle shapes instead of soft discs. These misshapen cells get stuck in veins and arteries, blocking the flow of blood that carries life-giving oxygen to the body and causing the disease’s horrifying hallmark: episodes of agony that begin in babyhood.

Millions of people globally, a vast majority of them Africans, suffer from sickle cell disease. Researchers have worked for decades on improving treatment and finding a cure, but experts said the effort has been hindered by chronic underfunding, in part because most of the estimated 100,000 people in the United States who have the disease are African American, often poor or of modest means.

The disease also affects people with southern European, Middle Eastern or Asian backgrounds, or those who are Hispanic, like Helen.

This is the story of two quests for a sickle cell cure — one by the Obando family and one by a determined scientist at Boston Children’s Hospital, Dr. Stuart Orkin, 73, who has labored against the disease since he was a medical resident in the 1970s.

Like many others affected by sickle cell, the Obando family faced a double whammy: not one but two children with the disease, Helen and her older sister, Haylee Obando. They lived with one hope for a cure, a dangerous and sometimes fatal bone marrow transplant usually reserved for those with a healthy sibling as a match. But then they heard about a potential breakthrough: a complex procedure to flip a genetic switch so the body produces healthy blood.

Scientists have been experimenting with gene therapy for two decades, with mixed success. And it will be years before they know if this new procedure is effective in the long term. But if it is, sickle cell disease could be the first common genetic disorder to be cured by manipulating human DNA.

Four weeks after the infusion of stem cells, Helen was strong enough to be discharged. At home, in Lawrence, Massachusetts, on a sofa with her mother by her side, she put a hand over her eyes and started to sob. She and her family wondered: Would it work? Was her suffering really over?

Sheila Cintron, 35, and Byron Obando, 40, met when she was in the eighth grade and he was a high school senior. They fell in love. Haylee, their first child, was born in 2001, when Cintron was 17.

When a newborn screening test showed that Haylee had the disease, her father asked, “What’s sickle cell?”

They soon found out.

As the family gathered for her first birthday party, Haylee started screaming inconsolably. They rushed her to the hospital. It was the first of many pain crises.

Doctors warned the parents that if they had another baby, the odds were 1 in 4 that the child would have sickle cell, too. But they decided to take the chance.

Less than two years later, Helen was born. As bad as Haylee’s disease was, Helen’s was much worse. When she was 9 months old, a severe blockage of blood flow in her pelvis destroyed bone. At age 2, her spleen, which helps fight bacterial infections, became dangerously enlarged because of blocked blood flow. Doctors surgically removed the organ.

After Helen was born, her parents decided not to have any more children. But four years later, Cintron discovered she was pregnant again.

But they were lucky. Their third child, Ryan Obando, did not inherit the sickle cell mutation.

As Ryan grew up, Helen’s health worsened. When he was 9, Helen’s doctors suggested a drastic solution: If Ryan was a match for her, he might be able to cure her by giving her some of his bone marrow, though there would also be major risks for her, including death from severe infections or serious damage to organs if his immune system attacked her body.

As it turned out, Ryan matched not Helen but Haylee.

The transplant succeeded, but her parents asked themselves how they could stand by while one daughter was cured and the sicker one continued to suffer.

There was only one way to get a sibling donor for Helen: have another baby. In 2017, the couple embarked on another grueling medical journey.

Obando had a vasectomy, so doctors had to surgically extract his sperm from his testicles. Cintron had 75 eggs removed from her ovaries and fertilized with her husband’s sperm. The result was more than 30 embryos.

Not a single embryo was both free of the sickle cell gene and a match for Helen.

So the family decided to move to Mesa, Arizona, from Lawrence, where the cold, which set off pain crises, kept Helen indoors all winter. The family had already sold their house when they heard that doctors at Boston Children’s were working on sickle cell gene therapy.

Cintron approached Dr. Erica Esrick, a principal investigator for the trial. But the trial wasn’t yet open to children.

Figuring out the science

Nothing had prepared Orkin for the suffering he witnessed in his 30s as a medical resident in the pediatric hematology ward at Boston Children’s. It was the 1970s, and the beds were filled with children who had sickle cell crying in pain.

Orkin knew there was a solution to the puzzle of sickle cell, at least in theory: Fetuses make hemoglobin — the oxygen-carrying molecules in blood cells — with a different gene. Blood cells filled with fetal hemoglobin do not sickle. But the fetal gene is turned off after a baby is born, and an adult hemoglobin gene takes over. If the adult gene is mutated, red cells sickle.

Researchers had to figure out how to switch hemoglobin production to the fetal form. No one knew how to do that.

The breakthrough came in 2008. The cost of gene sequencing was plummeting, and scientists were finding millions of genetic signposts on human DNA, allowing them to home in on small genetic differences among individuals. Researchers started doing large-scale DNA scans of populations, looking for tiny but significant changes in genes. They asked: Was there a molecular switch that flipped cells from making fetal to adult hemoglobin? And if there was, could the switch be flipped back?

They found a promising lead: an unprepossessing gene called BCL11A.

In a lab experiment, researchers blocked this gene and discovered that the blood cells in petri dishes started making fetal instead of adult hemoglobin.

Next they tried blocking the gene in mice genetically engineered to have human hemoglobin and sickle cell disease. Again, it worked.

Patients came next, in the gene therapy trial at Boston Children’s that began in 2018.

The trial — run by Dr. David Williams, an expert in the biology of blood-forming stem cells at Boston Children’s, and Esrick — has a straightforward goal: “We’re going to reeducate the blood cells and make them think they are still in the fetus,” Williams said.

Doctors gave adult patients a drug that loosened stem cells — immature cells that can turn into red blood cells — from the bone marrow, their normal home, so they floated free in the bloodstream. Then they extracted those stem cells from whole blood drawn from the patient.

The researchers used a disabled genetically engineered AIDS virus to carry information into the stem cells, flipping on the fetal hemoglobin gene and turning off the adult gene. Then they infused the treated stem cells into patients’ veins. From there, the treated cells migrated into the patients’ bone marrow, where they began making healthy blood cells.

Manny Johnson was the first patient. He was 21 and had had two strokes by the time he was 4 years old. The gene therapy worked for him and two other adults; they are now making abundant fetal hemoglobin.

The researchers will follow the patients for 15 years to see if the treatment lasts, as the Food and Drug Administration requires in gene therapy clinical trials.

With the success in adults, the FDA said Boston Children’s could move on to teenagers.

When her mother told her about the gene therapy trial, Helen was frightened. But the more she thought about it, the more she was ready to take the risk.

In the months after the gene therapy infusion at Boston Children’s, her symptoms disappeared.

Helen was scheduled for her six-month checkup Dec. 16. Helen’s total hemoglobin level was so high it was nearly normal — a level she had never before achieved, even with blood transfusions. She had no signs of sickle cell disease.