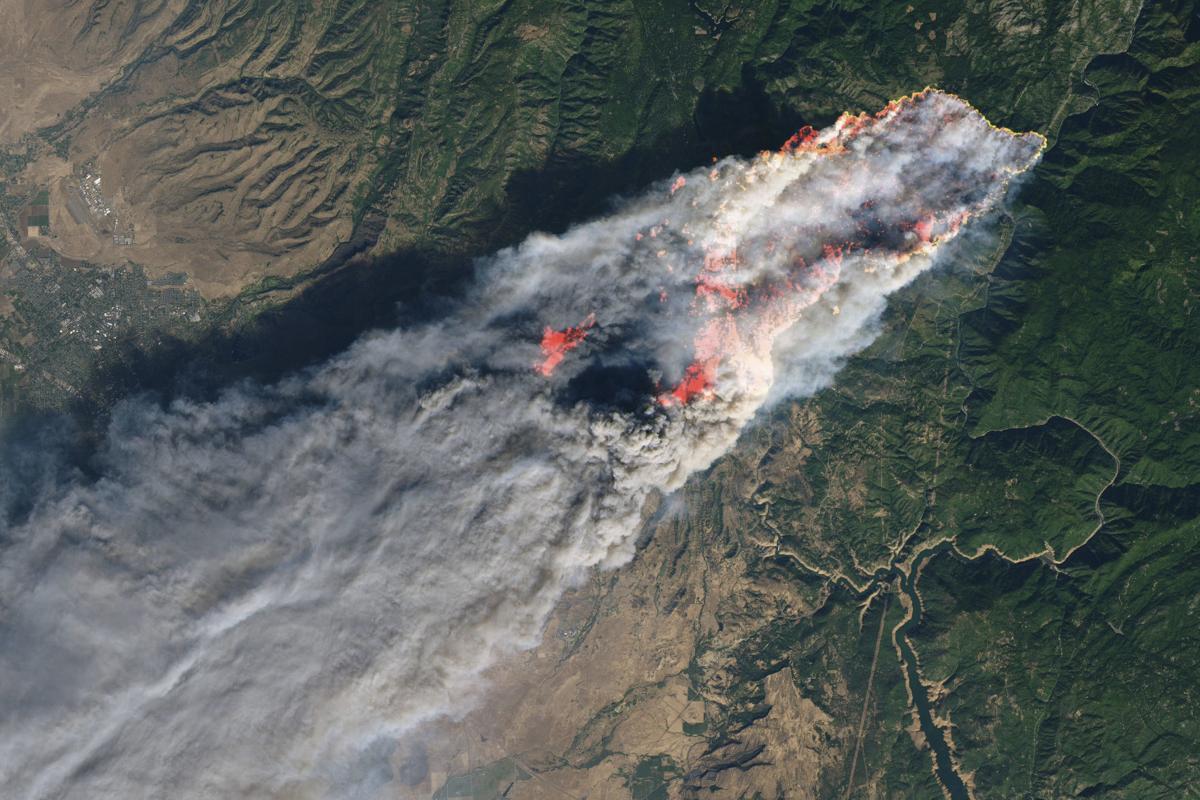 Flames and smoke from the Camp Fire that erupted 90 miles north of Sacramento, Calif. — NASA via AP 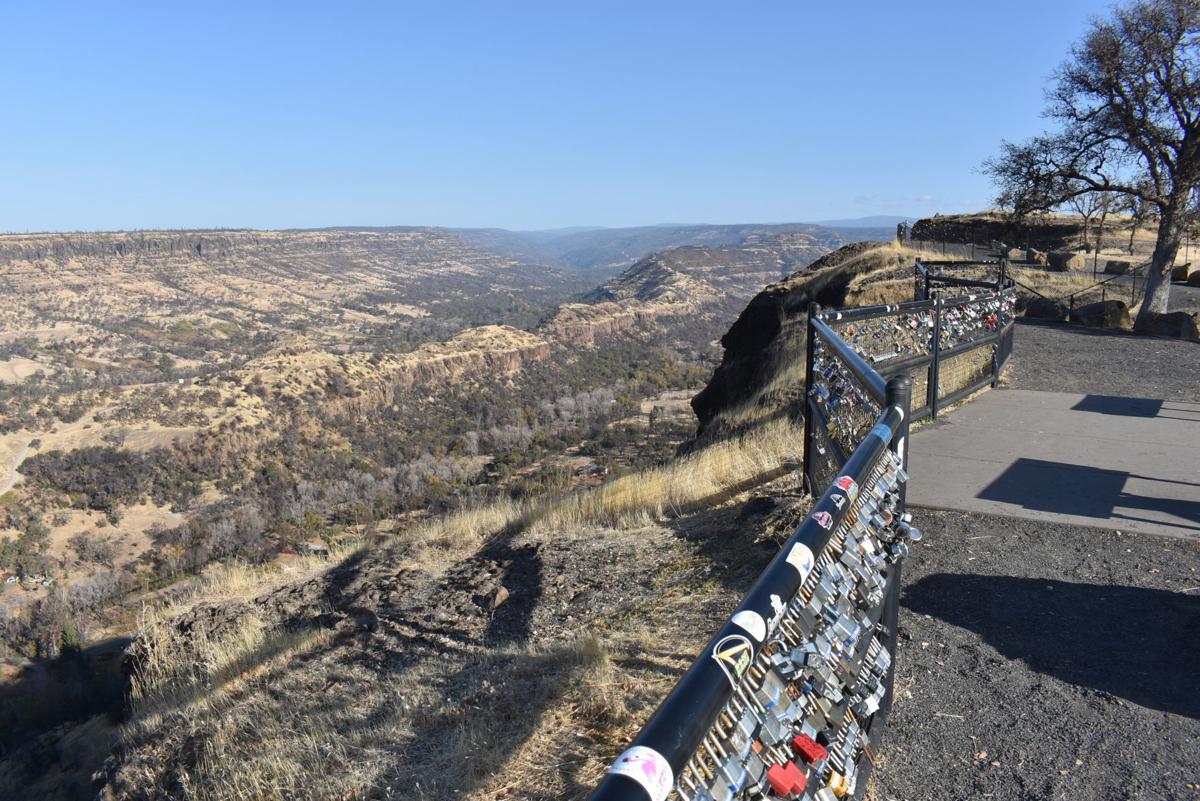 The view overlooking Butte Creek Canyon, which was burned in a 2018 wildfire that destroyed the nearby town of Paradise, Calif. — AP Photo/Matthew Brown

Flames and smoke from the Camp Fire that erupted 90 miles north of Sacramento, Calif. — NASA via AP

The view overlooking Butte Creek Canyon, which was burned in a 2018 wildfire that destroyed the nearby town of Paradise, Calif. — AP Photo/Matthew Brown

Then came the smoke — not just from the forest but also from some 14,000 houses and their contents that burned, generating a thick plume that enshrouded portions of Northern California for weeks and left Norton gasping.

And since the fire, more than a year now, it has been sickness: repeated respiratory infections that sap Norton’s strength, interfere with her work and leave the 30-year-old cardiac care nurse worried about future health problems.

The immediate toll of lives and property lost when a fire tore through the Sierra Nevada foothills town of Paradise, California in November 2018 is well documented. Still unknown is the long-term impact of the intense smoke exposure suffered by the tragedy’s survivors and the hundreds of thousands of people living in communities downwind of the blaze.

Increasingly intense wildfires are scorching forests from across the Western U.S. to Australia and stoking concern among residents and health professionals about long-term health impacts from smoke exposure.

The issue has far-reaching implications as climate change turns some regions of the globe drier and more prone to fires that send up smoke plumes that can travel thousands of miles and affect millions of people.

The unprecedented fires burning across Australia offer the most recent example as they blanket major cities with dangerous air pollution. Smoke from those fires, which started burning in September, by this week had spread across more than 7.7 million square miles (20 million square kilometers) and drifted across the Pacific Ocean to reach South America, according to the United Nation’s meteorological agency and the Copernicus Atmosphere Monitoring Service.

Th e fires have torched more than 2,000 houses and killed at least 26 people. Authorities ordered new evacuations in New South Wales and the neighboring state of Victoria as rising temperatures and erratic winds on Friday threatened to fan dozens of blazes still burning out of control.

Both states issued hazardous air quality warnings for affected areas and said people with health problems should consider relocating until the smoke clears.

Compounding the danger, experts and firefighters say, is the proliferation of construction materials and household items made from petroleum-based plastics, ranging from plumbing pipes to exterior siding. Those burn hotter and generate smoke more toxic than wood does, exposing people to numerous hazardous chemicals.

Researchers and health officials are confident more people will get sick and many will die as regions such as the U.S. West see bigger, more intense wildfires.

An estimated 20,000 premature deaths now occur annually in the U.S. due to chronic wildfire smoke exposure. That’s expected to double by the end of the century, according to scientists funded by NASA, as tens of millions of people get exposed to massive “smoke waves” emanating from blazes in Western states.

But while those forecasts help illustrate the profound impacts of a warming climate, they can’t predict which fires will prove deadly and which individuals will develop lung ailments or other illnesses.

One of relatively few long-term studies on the issue is under way at the California National Primate Research Center. Fifty rhesus monkeys living in outdoor pens year-round were exposed to a prolonged period of wildfire smoke as infants in 2008. They’ve developed lungs 20% smaller than another group of monkeys born a year later, researchers found.

“It’s the closest animal model to replicate what happens with kids,” said Lisa Miller, the center’s associate director of research.

The difference first showed up when the animals were adolescents, and has continued as they’ve matured. It’s impossible for the untrained eye to distinguish the smoke-exposed monkeys from hundreds of others that share their pens, but Miller’s team next plans to investigate how the decreased lung function affects activity levels of the monkeys.

As the animals age, any diseases they develop and how they die would give clues into the fate of humans heavily exposed to smoke.

Studies of wildland firefighters also give insights into the risks of smoke inhalation. They’ve shown significantly higher rates of lung cancer and death from heart disease, said Michael Kleinman, who researches the health effects of air pollution and is a professor of environmental toxicology at the University of California, Irvine.

Firefighters get much higher and more frequent doses of smoke, but Kleinman said a proportional increase in illnesses could be expected among the general public exposed to wildfire smoke across California and the West.

“It’s safe to say there will probably more effects at the long-term level,” Kleinman said. “Especially if those events happened over a longer period of time or more repeatedly, there will be cumulative damage to the lung and heart which eventually will lead to chronic disease.”

As she fled with her boyfriend ahead of the fire that destroyed Paradise on the morning of Nov. 8, 2018, Norton said the smoke was so thick “it was like midnight.”

A few days later, she went back to work at a hospital in Chico, about 15 miles (24 kilometers) miles from Paradise. But smoke from the still-burning fire had made it inside the facility.

There weren’t enough face masks to go around so Norton said she went without one for several days.

Initially she felt just a bit wheezy, as she had during the last major fire in the area about a decade earlier. But two weeks later she came down with a respiratory infection that brought fever and severe congestion.

When that finally cleared, she got another, then another — eight or nine infections in all over the past year.

“I just want to break this cycle of sickness,” she said.

Norton says she never smoked, nor did her parents, and never had any respiratory issues prior to the fire. She missed so much work in the months after the fire that she got a warning from a supervisor.

To try to keep from getting sick, she rinses out her sinuses regularly and takes antihistamines to reduce inflammation in her airways. She also avoids large gatherings, including skipping office parties and two weddings, out of fear that she could pick up a virus. She tries to eat healthy and reduce stress by seeing a counselor.

Norton has been to a pulmonologist and two ear nose and throat doctors to little avail, and has been referred to a sinus specialist at Stanford University for further testing.

The pulmonologist who initially treated her, Dinesh Verma, said he sees a “direct correlation” between Norton’s smoke exposure and her subsequent health struggles.

“The logical explanation definitely would be that intense smoke, basically chemical exposure, did damage the airways to the extent that they’re now more susceptible” to infection, Verma said.

Verma said virtually all of his hundreds of patients from Chico and Paradise had complications after the fire that required them to be hospitalized or treated.

Most had preexisting conditions such as asthma and needed only a trigger to send them into a downward spiral. Predicting what will happen with otherwise-healthy patients like Norton is more difficult, he said.

Norton is among about 9,000 people who responded to a health survey as part of a long-term health study of smoke exposure in Paradise and other California communities. The work is led by researchers at the University of California, Davis, who plan to track the lung health of a small number of those respondents in coming years by measuring their breathing capacity.

They’re also collaborating with Williams at the primate center to see if the decline seen in the rhesus monkeys has parallels for human infants.