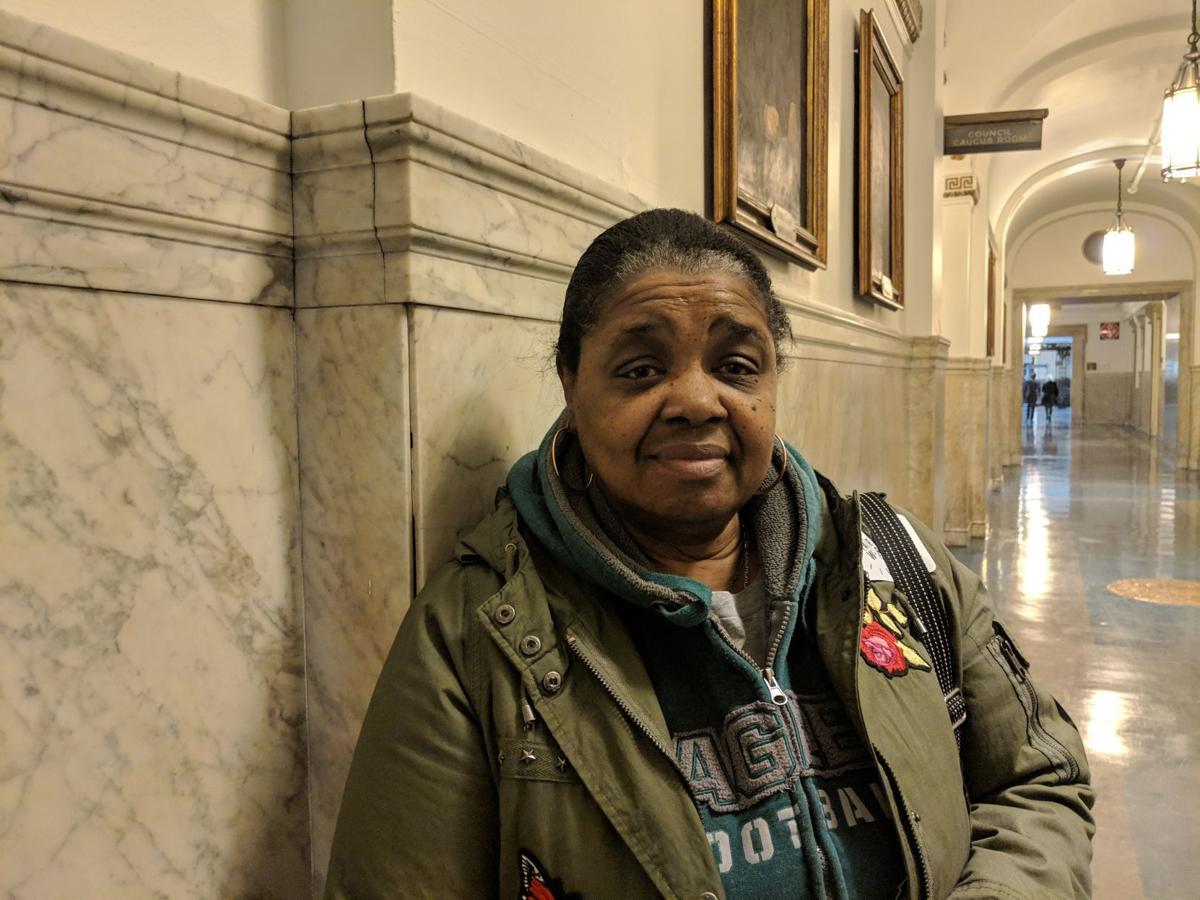 Valencia Williams, a seasonal worker for Aramark, says her unpredictable schedule is chaotic. 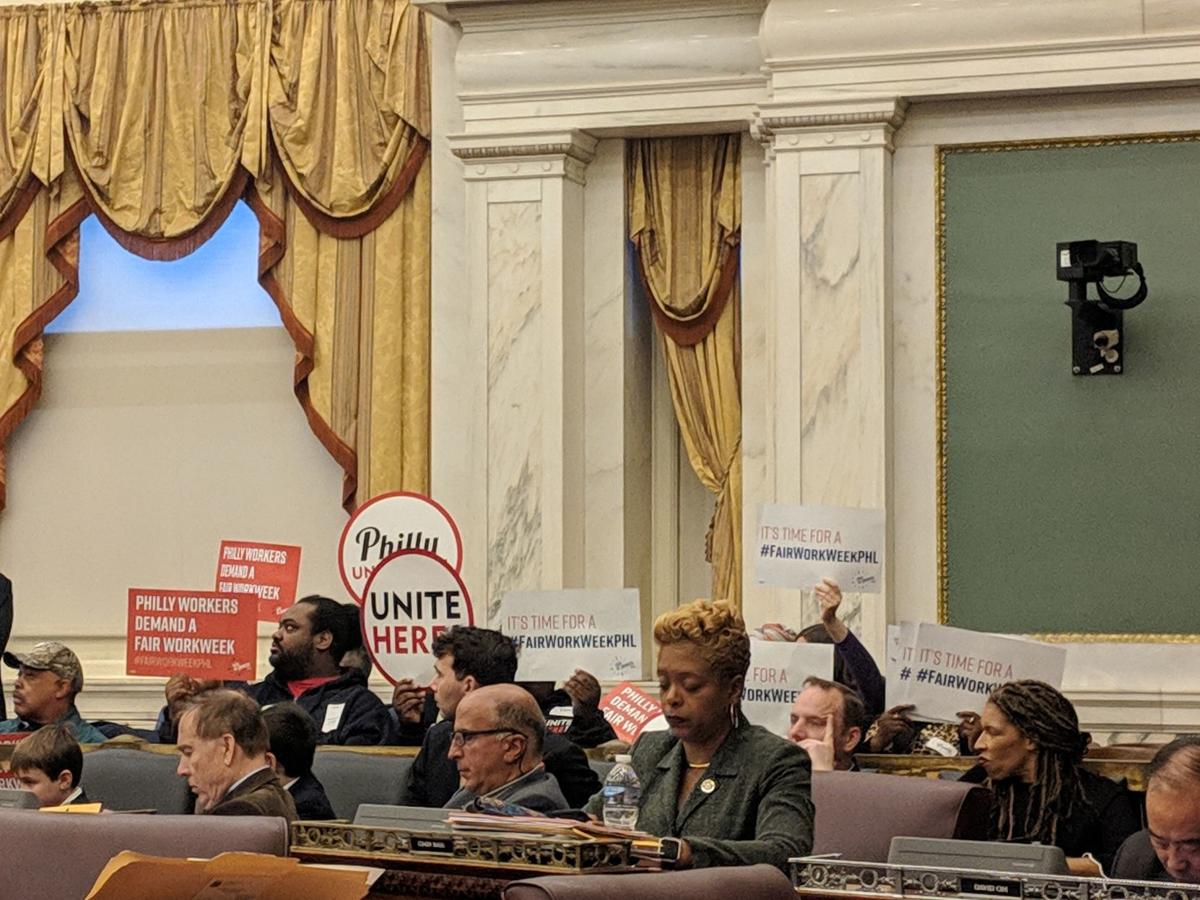 Supporters of the “fair work week” legislation hold up signs at the City Council meeting on Thursday.

Valencia Williams, a seasonal worker for Aramark, says her unpredictable schedule is chaotic.

Supporters of the “fair work week” legislation hold up signs at the City Council meeting on Thursday.

Valencia Williams works only when the Philadelphia Phillies take the field at home.

As a seasonal concession worker for Aramark, she sells ballpark staples of hot dogs and cheesesteaks at Citizens Bank Park. She earns about $13.75 a hour, which she uses to care for her two grandchildren who live with her in West Philadelphia.

But the 63-year-old said her paycheck is never consistent because her work schedule is chaotic and at the mercy of weather and crowd size.

“The biggest problem that I have,” Williams said, “is when you’re scheduled to work, and they might call you and tell you, your stand is going to be closed Wednesday and Thursday. That’s money that was — the little money that I make, you know, I want — I need it.”

In other instances, Williams has traveled more than an hour on a three-seat ride — a bus and two trains — to the stadium, only to arrive and be told she’s not working that day.

“It affects me mentally and financially,” she said.

On Thursday, Williams joined more than a dozen supporters at City Hall during the City Council meeting to advocate for legislation that would force her employer to offer more protections when it comes to her schedule and compensation for last-minute changes in some instances.

The so-called “fair work week” legislation aims to bolster worker protections for an estimated 130,000 workers in Philadelphia at certain businesses, such as mandating some employers to issue work schedules more than a week in advance and providing compensation for last-minute alterations in some instances.

The legislation primarily would help low-wage service workers with unpredictable schedules, said Roberta Iversen, a professor at the University of Pennsylvania’s School of Social Policy and Practice.

Nationwide, people of color make up the majority of those positions in industries such as health care, hotel, food and retail, Iversen said.

In Philadelphia, Blacks make up 28 percent of workers in the food and retail industries, and Latinos make up 17 percent, according to census data compiled by an ongoing national study, the Shift Project. Whites make up 42 percent.

“It’s a discriminatory practice, even though the intention is not discriminatory,” Iversen said, referring to the unpredictable and changing work schedules that are part of those industries.

The legislation providing for more predictable and advanced work scheduling also would benefit single working mothers, who must manage child care, said Councilwoman Helen Gym, the primary sponsor of the bill. But she noted the broad-based bill would affect many people.

Rodney Muhammad, president of the Philadelphia Chapter of the NAACP, said in a statement that he supported the legislation.

“The majority of Philadelphia’s service workers are people of color, and this is a racial justice issue,” Muhammad said. “Philadelphians deserve workplaces that don’t exploit them and we must guarantee workers protections against exploitation.”

Williams, the seasonal hourly worker for Aramark, has some protections under a collective bargaining agreement, but said she is not paid for a full shift when her schedule is altered or canceled.

The bill has its detractors in the business community.

The Pennsylvania Restaurant and Lodging Association has said the legislation would hurt both employers and employees by cutting into slim profit margins and causing businesses to hire fewer employees or leave shifts unfilled.

Karen Cutler, a spokeswoman for Aramark, said in an email that the company continues to work with City Council to address its concerns, but the legislation contains unintended, negative consequences for both employers and employees.

“Unfortunately, many of our core concerns remain unaddressed in the current version of the bill,” Cutler said.

Gym said City Council might make some amendments to the bill.

“It will be minor and it won’t significantly affect the protections that are already there,” Gym said in the City Council chambers.

If amendments are introduced, the bill could be up for a final vote as early as Dec. 6.

The City Council is considering bolstering protections for some hourly employees when it comes to their work schedules.

This is important legislation. It's going to pass Council, where nine votes are needed. I do have one question though. Ms. Williams cares for two grandchildren. Where are the parents? I see a lot of grandparents doing this; and some of these grandchildren are very little kids. What happens when the grandparent passes on? It's just a question. I don't expect an answer.