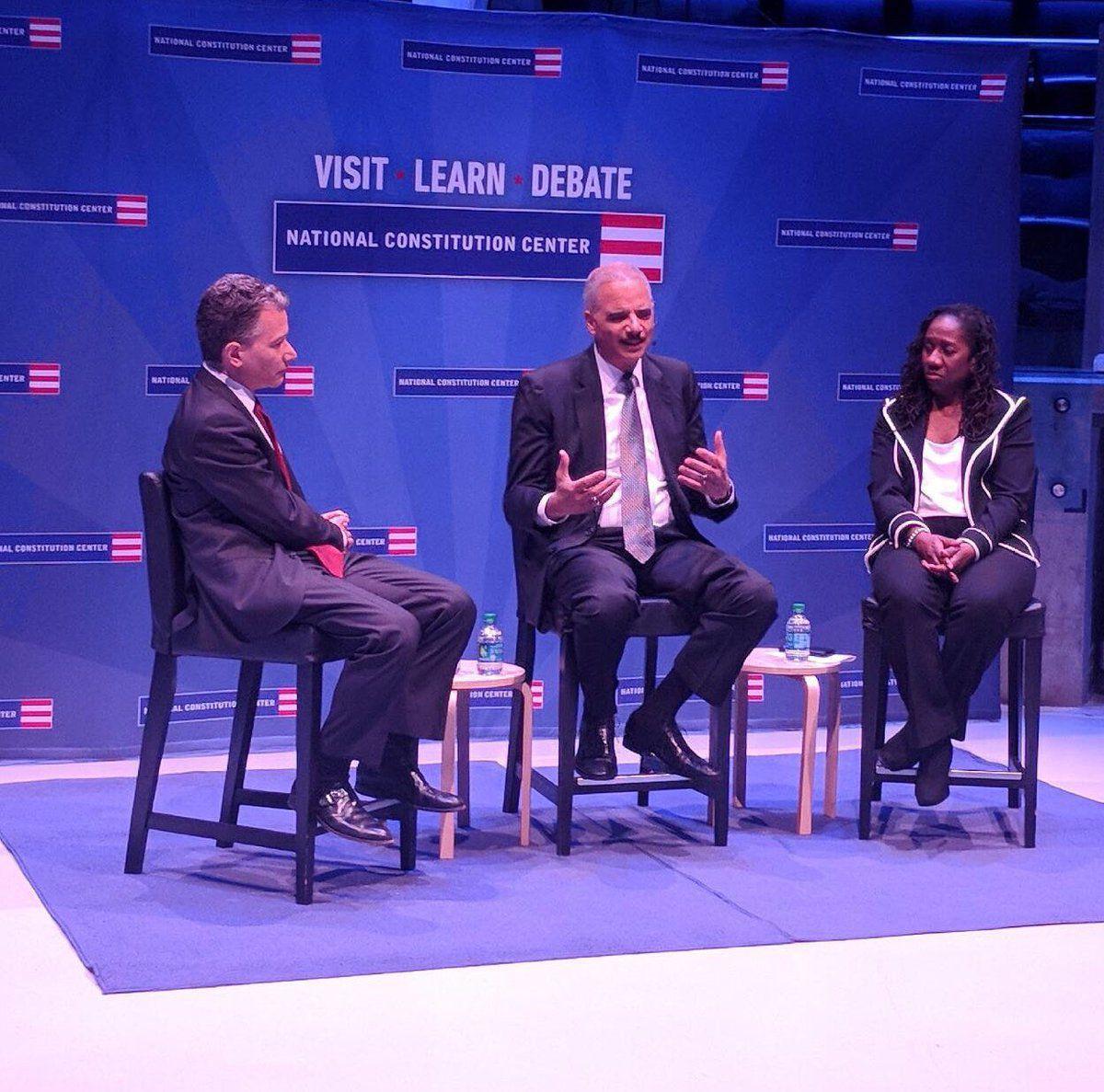 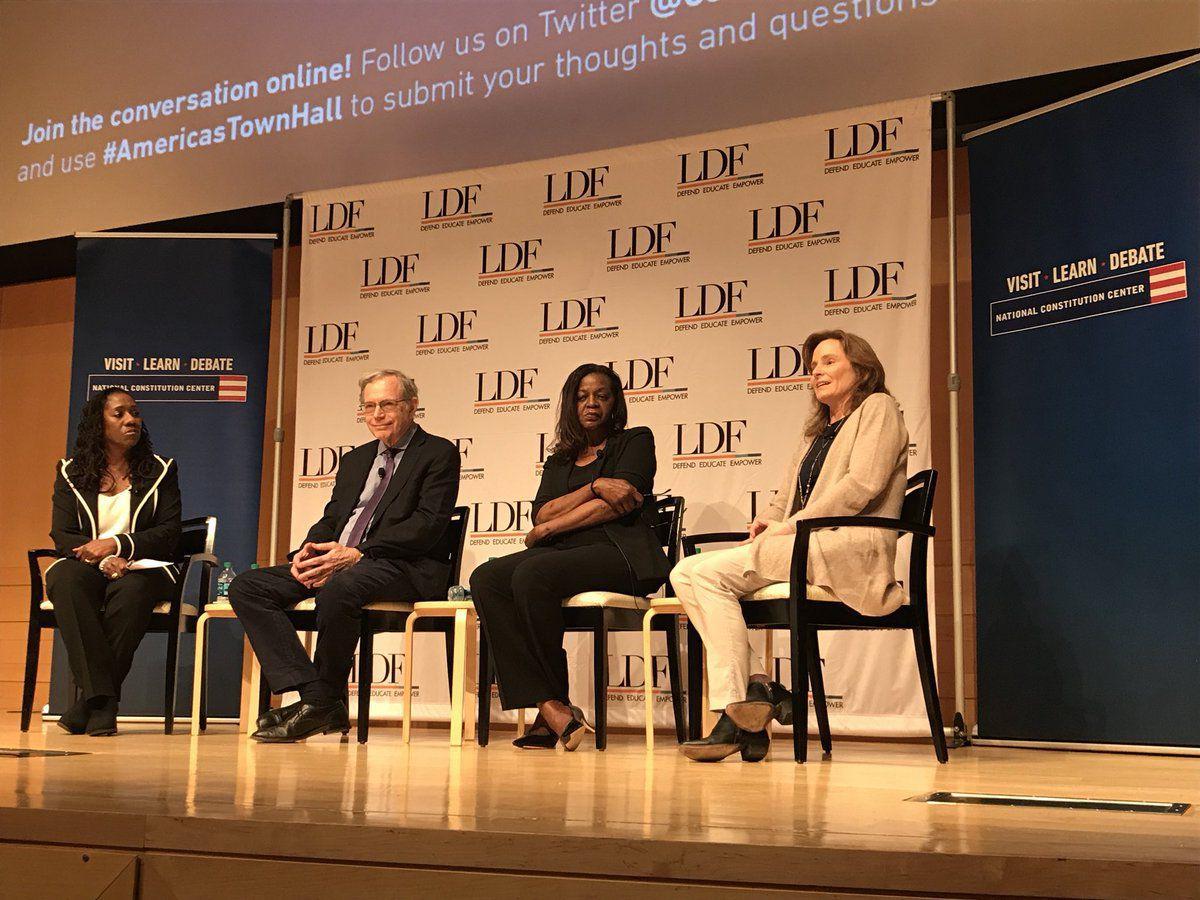 Sherrilyn Ifill, left, president and director-counsel of the NAACP Legal Defense and Educational Fund, Inc., moderates a panel with Eric Foner, Kate Masur, and Thavolia Glymph on the struggle over Reconstruction in American public memory on Monday at the National Constitution Center. — Twitter/Janai Nelson 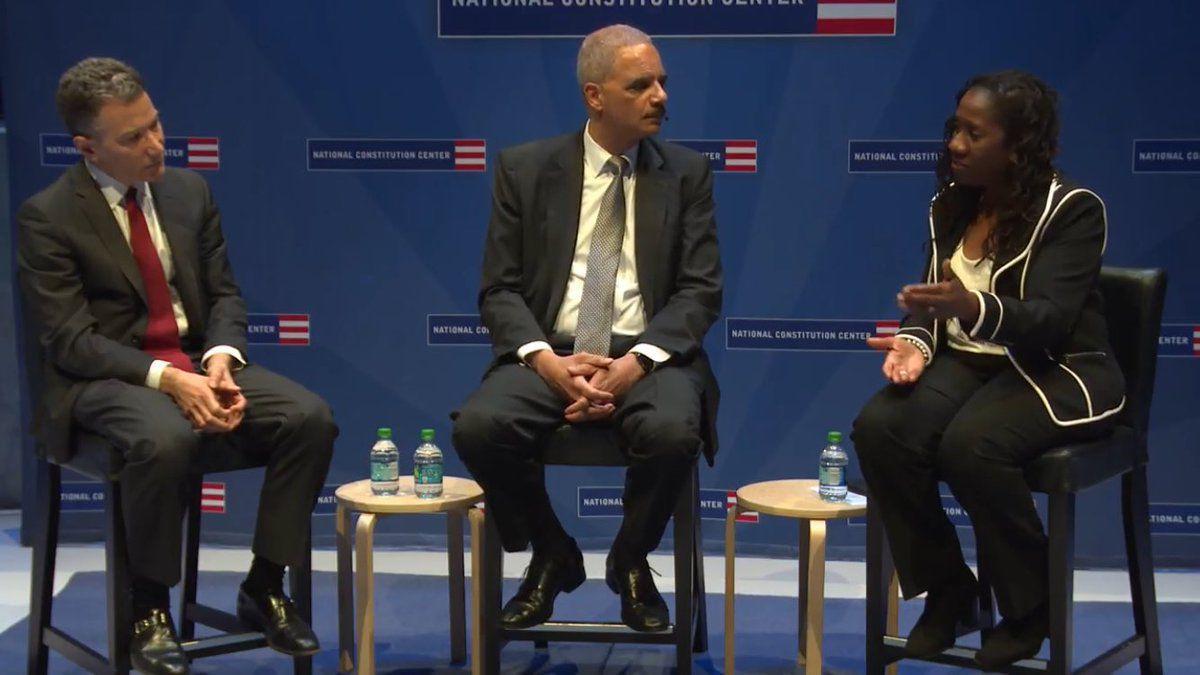 Sherrilyn Ifill, left, president and director-counsel of the NAACP Legal Defense and Educational Fund, Inc., moderates a panel with Eric Foner, Kate Masur, and Thavolia Glymph on the struggle over Reconstruction in American public memory on Monday at the National Constitution Center. — Twitter/Janai Nelson

For former attorney general Eric Holder Jr., the wrongful arrest of two Black men in a Philadelphia Starbucks for waiting in the store and not making a purchase comes down to “common sense.”

“At some point, there’s this thing called common sense that needs to kind of get infused into how we react to situations,” Holder said, referring to both the employee who called the police and the officers who made the arrests.

Holder made his comments during a daylong event marking the 150th anniversary of the ratification of the 14th Amendment at the National Constitution Center.

Holder, who was the keynote speaker, was interviewed by Sherrilyn Ifill, president and director-counsel for the NAACP Legal Defense and Educational Fund, and Jeffrey Rosen, president and CEO of the National Constitution Center.

Responding to an audience member’s question, Holder said the arrests at the Starbucks located at 1801 Spruce St.also were an example of the life-altering decisions that police must make.

“In some ways, you’re asking police to do things that are inconsistent with what they are sworn to do, which is simply to enforce the law,” Holder said. “But you can’t have blinders on. What is, at the end of the day, the best solution? What is the fair solution? What’s going to be the best resolution? It may not simply be to just enforce the law as it’s written.”

When speaking about the relations between African Americans and police, Holder said a “level of distrust” was still there. He added that thanks to the prevalence of smartphones and recording devices, the majority of the county was “awakened to things that people in the African-American community, Hispanic community had known for years.”

While reflecting on his own experience as a Black man, Holder said: “Race is still something that matters in this country.

The event, Equal Protection for All: The 14th Amendment at 150, was put on in collaboration between the Thurgood Marshall Institute at the NAACP Legal Defense and Educational Fund.

In addition, the event also included panel discussions featuring historians and scholars discussing the past, present and future of the 14th Amendment.

The 14th Amendment granted all citizens equal protection of the laws, and prevented states from passing any law “which shall abridge the privileges or immunities of citizens of the United States” or “deprive any person of life, liberty, or property, without due process of law,” among other things.

While other Amendments may make headlines, Ifill said the rarely talked about 14th Amendment actually shapes how we think about our rights as Americans.

“It’s about citizenship and everything that’s going on in Philadelphia and elsewhere, where the rights of people and, you could say, in particular, the rights of certain Black people are just — it just seems to many people — trampled upon,” Glymph said.

Among those in attendance were lawyers Sarah Hamilton, 30, originally from England, and Vincent Southerland, of Brooklyn, New York, who work together at the New York University School of Law’s Center on Race, Inequality, and the Law.

Southerland characterized the 14th Amendment as the centerpiece of how the United States enforces civil and equal rights that people have, particularly when it comes to race.

He added: “But I’m more interested in how everything came together, and how much tension and back and forth there was in the development and shaping of the 14th Amendment, and really how there was no real thought about how things might be interpreted down the road.”

Holder better go back to his log house.
He’s a bum. He didn’t prosecute the dudahs
in philly blocking voters. He’s a dudah bum.