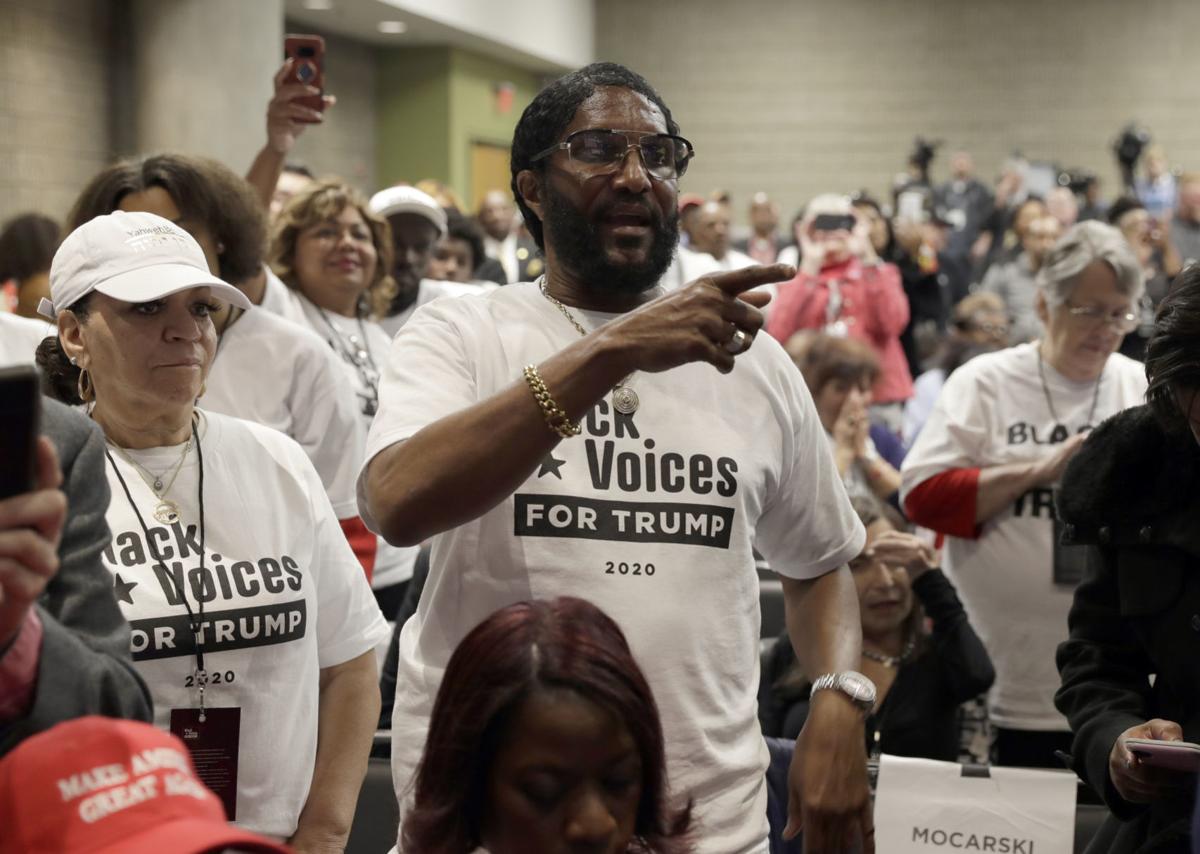 Supporters of President Donald Trump wait to listen to him speak during the launch of “Black Voices for Trump,” at the Georgia World Congress Center, Friday, in Atlanta. — AP Photo/ Evan Vucci 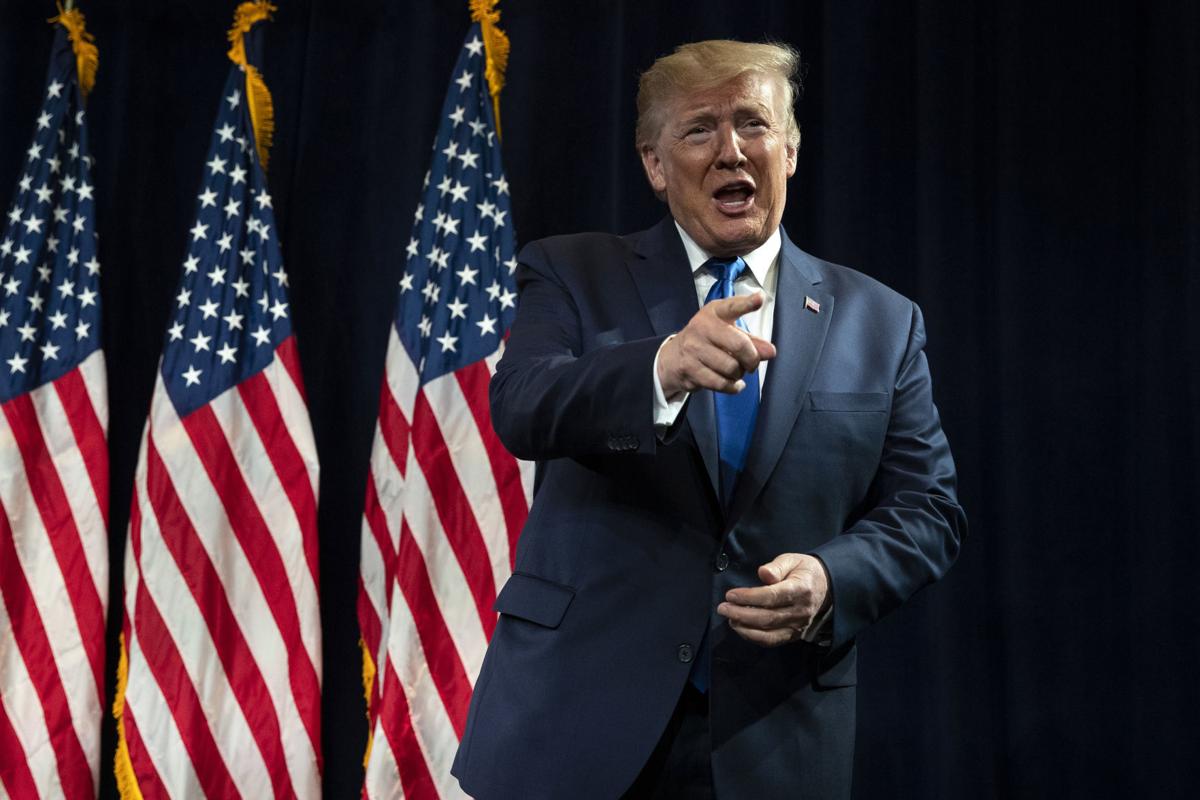 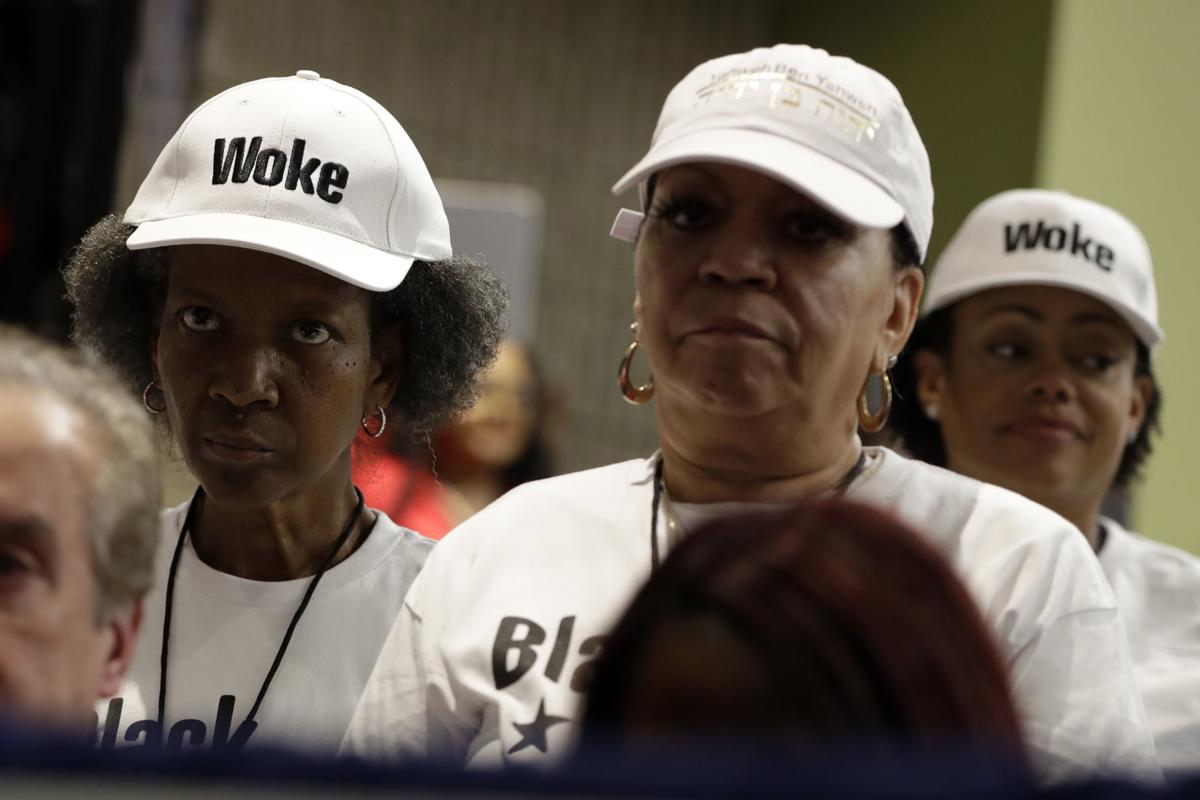 Supporters of President Donald Trump wait to listen to him speak during the launch of “Black Voices for Trump,” at the Georgia World Congress Center, Friday in Atlanta.

Supporters of President Donald Trump wait to listen to him speak during the launch of “Black Voices for Trump,” at the Georgia World Congress Center, Friday, in Atlanta. — AP Photo/ Evan Vucci

Supporters of President Donald Trump wait to listen to him speak during the launch of “Black Voices for Trump,” at the Georgia World Congress Center, Friday in Atlanta.

WASHINGTON — During the 2016 campaign, candidate Donald Trump stood in front of largely white crowds and asked Black voters to consider, “What the hell do you have to lose?”

Trump offered that same message Friday as he launched a Black voters coalition in Atlanta, Georgia. While Trump’s campaign had said his message would focus on his record and gains for Black Americans under his watch, Trump instead spent most of his time demonizing Democrats and appearing to try to pit minority voters against immigrants.

“The Democrats have let you down,” Trump told the crowd of several hundred supporters, including several who wore red “BLACK LIVES MAGA” hats. “They’ve dismissed you. They’ve hurt you. They’ve sabotaged you for far too long.”

Trump spoke at the launch of a new “Black Voices for Trump” outreach initiative dedicated to “recruiting and activating Black Americans in support of President Trump,” according to the campaign.

Trump predicted he would win reelection in 2020 with “a groundswell of support from hardworking African American patriots.”

Such prediction have been met with skepticism from critics, however, given Trump’s consistently dismal approval rating with Black voters.

Trump has spent much of the last four years engaged in racially charged attacks, going after minority members of Congress, claiming “no human being” would want to live in “rodent infested,” majority-minority Baltimore and insisting there were “very fine people on both sides” of the deadly Charlottesville protest against white supremacists.

Shortly after landing in Georgia on Friday, Trump retweeted a call from one Black supporter for submissions for a “#MAGACHALLENGE” competition featuring Trump-friendly rap songs. Trump said he would be announcing the winners and inviting them to the White House to meet with him and perform.

“I think Black Americans are not the audience for these outreach efforts,” said Theodore Johnson, a senior fellow at the Brennan Center for Justice who is an expert in race and politics. While Trump might be able to maintain the low level of Black support he received in 2016, or perhaps expand it by 1 or 2 points, Johnson sees little evidence the president can change many minds.

“I think this is not going to move the needle at all,” he said.

Before launching the new effort, Trump met with supporters at a fundraiser that was expected to raise about $3.5 million for a joint committee benefiting the Republican National Committee, the Trump campaign and the campaign of Sen. David Perdue, R-Ga. Nearby, a small group of protesters chanted, “Lock him up!”

Scores of protesters also gathered outside the convention center where Trump was speaking, chanting, “Impeach and remove.”

Carl Dix, of the group Refuse Fascism, said he thought the launch was aimed at trying to send a message to Trump’s white supporters that he’s “not a racist. ‘I’ve got Black friends.’”

In 2016, 6% of Black voters supported Trump, according to a Pew Research Center analysis of people who participated in its polls and were confirmed to have voted. There is no indication his support is growing. Polling shows that African Americans continue to be overwhelmingly negative in their assessments of the president’s performance, with his approval hovering around 1 in 10 over the course of his presidency, according to Gallup.

Yet Trump’s campaign dismissed the numbers, insisting the campaign has seen favorable movement and arguing the president can increase his margins with Black voters by bringing new people into the fold.

“The polls have never been favorable for Trump, and the only poll that matters is on Election Day,” said senior campaign adviser Katrina Pierson.

The campaign has launched similar coalitions for women, Latinos and veterans.

Darrell Scott, a Black Ohio pastor and a longtime supporter of the president who is co-chair of the new coalition and spoke at Friday’s event, said that in 2015 and 2016, supporters trying to sell Trump to Black voters could only point forward to things they anticipated from Trump.

“Now that it’s 2020, we’re able to point backwards and to some very definitive accomplishments that the president has done,” Scott said. “He delivered on promises he didn’t even make.”

During his remarks, Trump pointed to passage of bipartisan criminal justice reform legislation, which Trump signed into law last year, along with his ongoing support for opportunity zones in urban areas and new investments in historically Black colleges.

“I don’t know anyone who’s done that kind of work outside of the president on attacking those big issues or trying to stop drugs from coming into the neighborhood and, at the same time, giving people second chances,” said Ja’Ron Smith, deputy assistant to the president and one of the White House’s few minority high-ranked officials.

He also pointed to a series of economic gains, including the fact that Black unemployment hit a record low last year, with fewer Blacks living in poverty. But Trump and his campaign also have a tendency to exaggerate the gains, giving Trump credit for trends that were years in the making, seizing on momentary upticks, cherry-picking favorable statistics and ignoring more troubling ones, such as Black homeownership and net worth.

But Trump also worked to demonize the Democratic Party.

“For decades, the Democrats have taken African American voters totally for granted,” Trump said claiming, “They didn’t do anything for you.”

“The betrayal of the Black community” by Democrats is “unbelievable,” he told them, adding, “It’s amazing you’ve stayed so long, to be honest.”

Trump also tried to pit the Black community against immigrants, saying Democrats care more for people who have entered the U.S. illegally than African Americans. He wrongly claimed that Democrats had shut down the government last year to secure benefits for illegal immigrants and said they have never done anything similar for the African American community.

Yet even if he can’t win over Black voters, some suspect that’s not the point. As long as the campaign can keep on-the-fence voters from casting their ballots for the eventual Democratic nominee, the campaign will be helping Trump inch closer to a second victory.

“I do think the main objective is to discourage turnout,” said Johnson. “I absolutely think this is about creating doubt in Black voters’ minds about the Democratic nominee” so people feel like “there’s almost no one worth voting for.”

And he said fears were growing it might work.

WASHINGTON — Michael Bloomberg, the billionaire former mayor of New York City, is opening the door to a 2020 Democratic presidential campaign,…

Obama is right about giving ‘woke’ culture a rest, but will progressive Democrats listen?

Formerly defined as simply the opposite of being asleep, “woke” in the era of Black Lives Matter and the #MeToo movement frequently describes …

People of color make gains in mayoral races across the US

ALBUQUERQUE, N.M. — People of color made history this week by winning municipal races in places their families were once ignored or prevented …