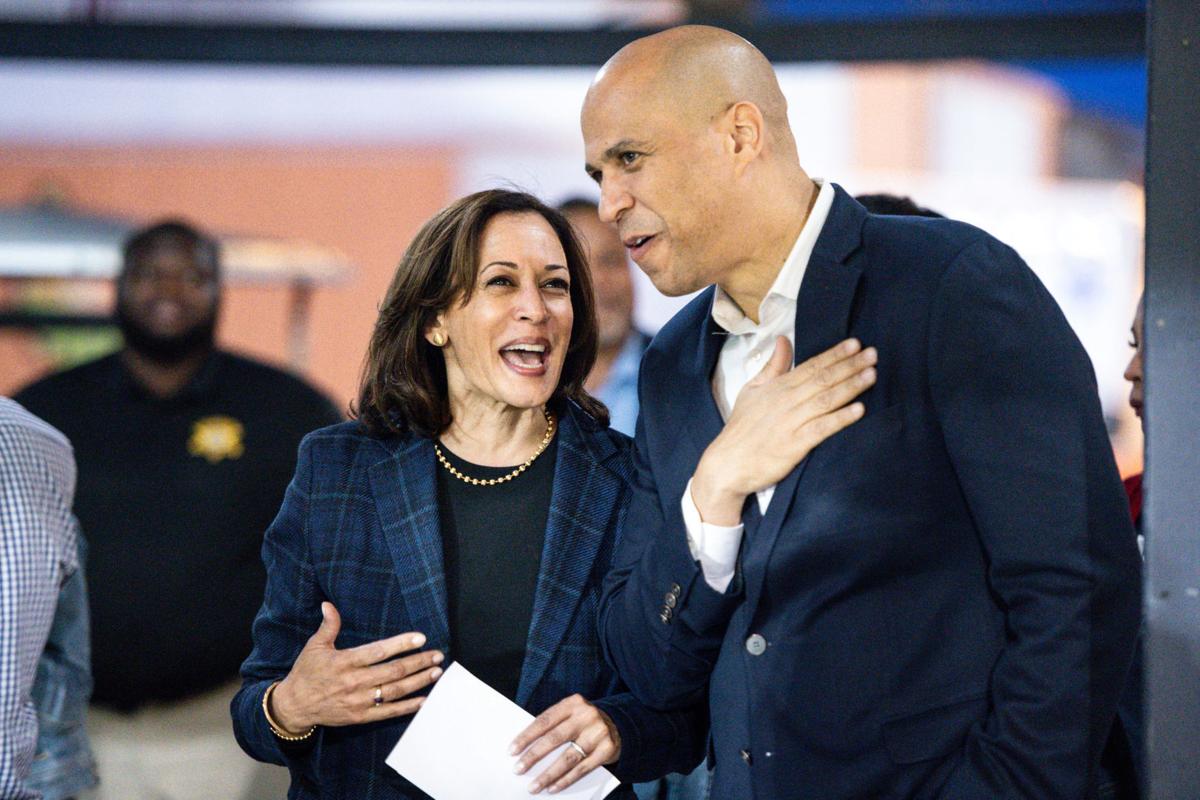 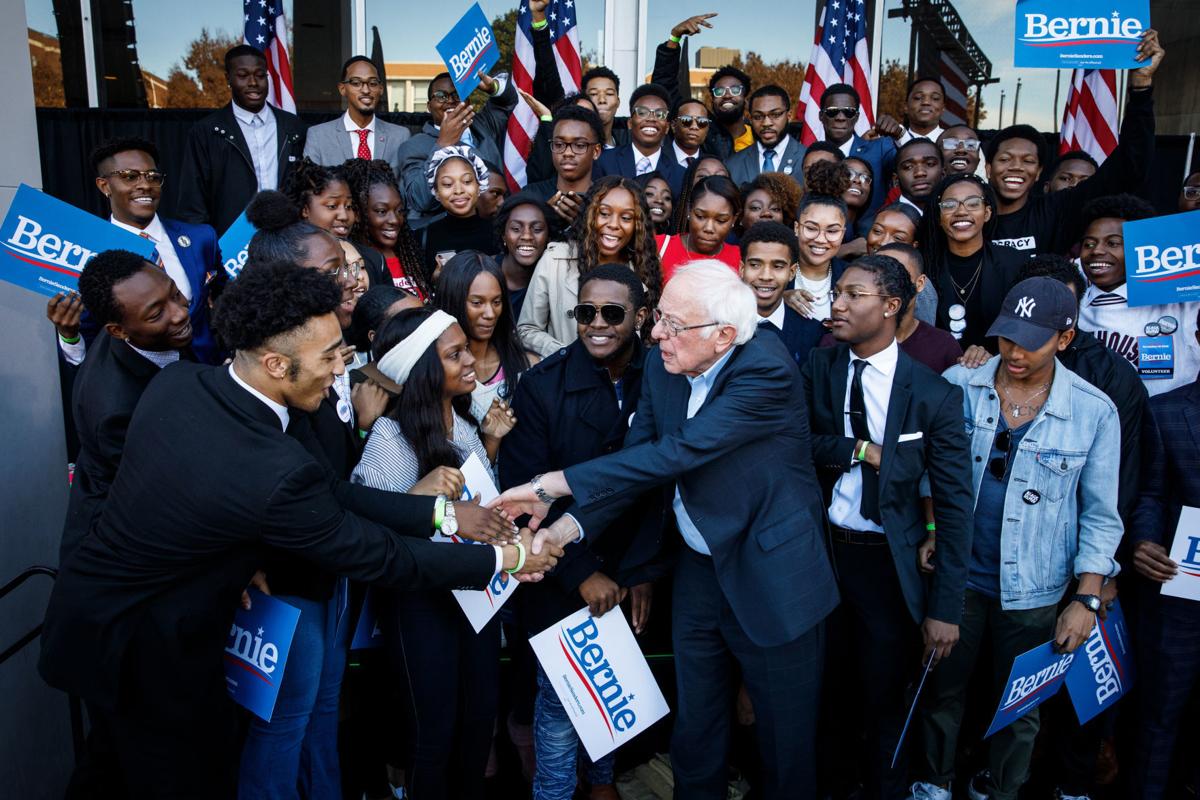 Sen. Bernie Sanders (I-Vt.) greets attendees after speaking at a rally at Morehouse College in Atlanta. Sanders and other Democratic presidential candidates crisscrossed Atlanta to speak to largely Black audiences, as they tried to build on a debate where racial justice was a key theme. — The New York Times Photo/Dustin Chambers 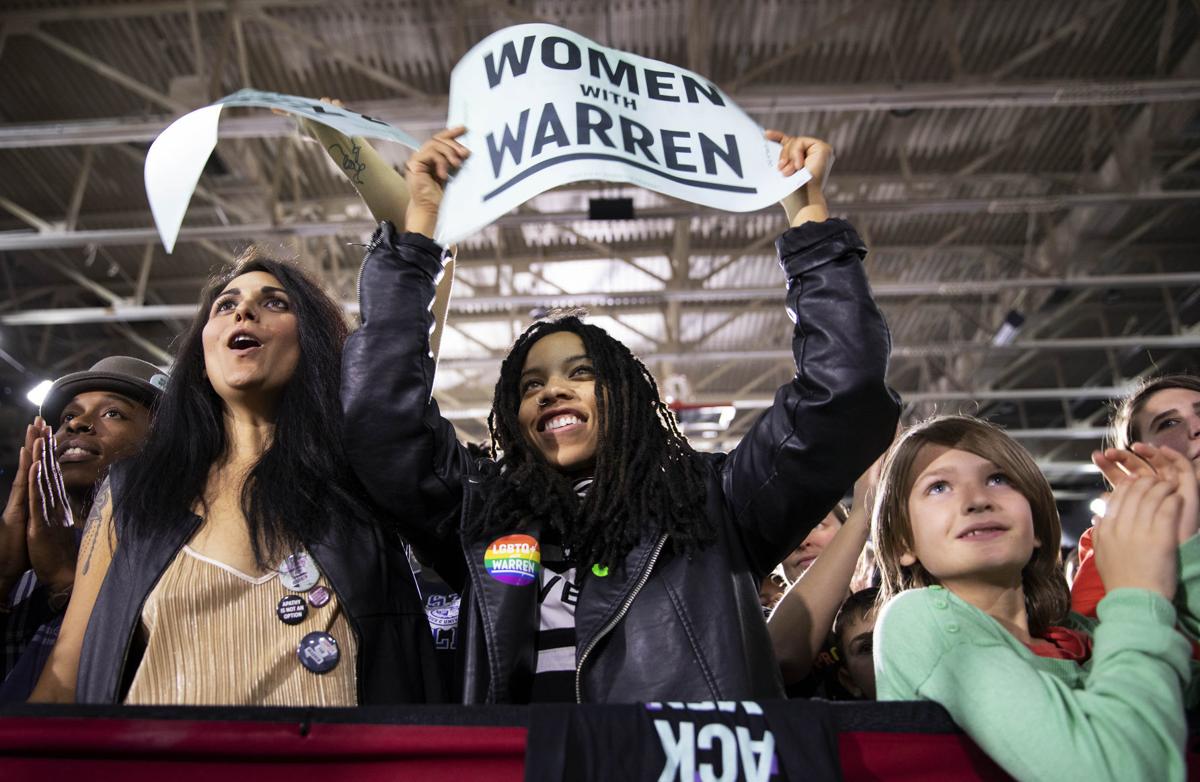 Attendees cheer for Sen. Elizabeth Warren (D-Mass.), a Democratic presidential candidate, during a rally at Clark Atlanta University, a historically black school, in Atlanta, on Thursday, Nov. 21, 2019. Warren and other Democratic presidential candidates crisscrossed Atlanta to speak to largely Black audiences, as they tried to build on a debate where racial justice was a key theme. (Ruth Fremson/The New York Times)

Sen. Bernie Sanders (I-Vt.) greets attendees after speaking at a rally at Morehouse College in Atlanta. Sanders and other Democratic presidential candidates crisscrossed Atlanta to speak to largely Black audiences, as they tried to build on a debate where racial justice was a key theme. — The New York Times Photo/Dustin Chambers

Attendees cheer for Sen. Elizabeth Warren (D-Mass.), a Democratic presidential candidate, during a rally at Clark Atlanta University, a historically black school, in Atlanta, on Thursday, Nov. 21, 2019. Warren and other Democratic presidential candidates crisscrossed Atlanta to speak to largely Black audiences, as they tried to build on a debate where racial justice was a key theme. (Ruth Fremson/The New York Times)

ATLANTA — Chyna Hester knew what she was supposed to say.

The 20-year-old Spelman College student had just attended a “Black Women’s Breakfast” featuring Kamala Harris, the Democratic presidential candidate and the second Black woman elected to the U.S. Senate. And speaker after speaker had explicitly argued that Black women should support Harris and leap at the opportunity to elevate someone with their lived experience.

But after the event Thursday, as Beyoncé’s “Brown Skin Girl” played in the background, Hester made a sheepish admission: Harris was not her preferred choice. There were policy reasons — Harris has not rolled out a proposal on student debt cancellation, which is Hester’s top issue. But there was also something else. Even at the historically Black all-women’s college that Hester attends, supporting Harris was a particularly uncool thing to do.

“It’s hard, you know. On social media, there’s a different meme about her every day,” Hester said. “A lot of young people don’t support her.”

“Why aren’t Black voters supporting the Black presidential candidates?” is an overly simplistic question. Like all voting blocs, Black voters have diverse priorities that crisscross the ideological spectrum, creating fault lines across regions, generations and economic class. But in interviews with more than two dozen Black voters in Atlanta and across South Carolina, many articulated a particular disenchantment with the idea that racial representation equated to change and that they should automatically back a candidate who looked like them.

Moderate Black voters, particularly older ones whose support has helped former Vice President Joe Biden maintain his lead atop most primary polls, pointed to the election of President Donald Trump and said nominating the candidate they saw as most capable of ending his administration was a moral priority above all others.

And some Black voters on the left — particularly younger ones — are disappointed by some aspects of former President Barack Obama’s legacy and have embraced the idea that supporting a candidate who is willing to upend unjust systems is more important than choosing one from their own community.

Biden, who held events in Atlanta and South Carolina after the debate, has made his support from Black voters, and the Southern mayors who govern them, a central talking point in his electoral pitch.

Dan Webb, a 58-year-old resident of Greenwood, South Carolina, who is Black, said it plainly: He was supporting Biden because he thought white people in key Electoral College states were more likely to vote for him — and he wants Trump out.

“Within South Carolina, within the African-American community, we don’t want to take a chance on someone that doesn’t have a chance of beating Trump,” Webb said. “I feel that Biden is the candidate that has the best chance.”

In the latest national polls, Sens. Elizabeth Warren of Massachusetts and Bernie Sanders of Vermont, the two progressive standard-bearers in the Democratic primary, are Biden’s closest rivals in terms of Black support — not Harris, of California, or Sen. Cory Booker of New Jersey.

“I want Black women in office, I do, and I love Kamala Harris and think she’s amazing, but I’m just more policy-focused,” said Amber Lowe, 29, a pastor and community activist in Atlanta. She was backing Warren.

“You need to focus on things beyond relating to me,” she said. “I want to talk about the stuff that affects me. What are you going to do for me?”

Aqil Shakur, a 53-year-old Atlanta area barber, said, “If I had a Kamala Harris or a Cory Booker that sounded like Bernie Sanders, of course I would choose them, because they’re closer to my lived experience.”

“But the Kamalas and the Corys aren’t discussing the issues he’s discussing,” he added.

The sentiment among members of the Black electorate has squeezed some candidates from both sides and is especially meaningful for Booker and Harris, two Black candidates looking to replicate Obama’s electoral playbook.

In Wednesday night’s debate, both candidates pitched themselves as best equipped to rebuild the “Obama coalition,” a subtle dig at moderate candidates like Mayor Pete Buttigieg of South Bend, Indiana, and Sen. Amy Klobuchar of Minnesota, who have impressed white moderates but have amassed almost no support among Black ones.

In the days that followed, at events in Atlanta and elsewhere, Booker and Harris re-upped their pitches. More than citing any particular policy, both candidates said Black voters could uniquely trust them based on their identities and personal backgrounds.

Regarding race, Booker said the country must elect a president who “doesn’t have an academic appreciation of these issues, but actually has a passion, an instinctual connection — is someone that we can trust to bring these issues to the front and center.”

Harris said at the Atlanta breakfast that her upbringing taught her lessons about Black communities that other candidates had to learn about in textbooks.

“I was raised knowing the injustices in the criminal justice system. I experienced it,” she said. “I didn’t acquire the language to talk about criminal justice as I started running for president.”

Pressed by a moderator, Harris said she felt that she faced two hurdles among Black voters: misinformation about her record and lower name recognition than the race’s white front-runners.

Over the weekend, she held a organizing push called “Black Women’s Weekend of Action.”

“When we talk about Black girl magic, we know that it is something special,” Harris told a crowd at Benedict College, a historically Black institution in Columbia, South Carolina. “But that magic is born out of hard work.”

Her supporters said Black voters sometimes held Black candidates to an unfair standard, encouraged by a political media biased against women of color.

“I think that there is unfortunately a tendency in our community for us to question the authenticity of people who look like us before we question other people,” said Theia Smith, 39, an entrepreneur from Atlanta who attended the breakfast.

But Black voters have a history of supporting Black candidates. Stacey Abrams, who ran for governor of Georgia last year, galvanized Black urban and rural voters throughout the state, which turned her underdog bid into a fiercely competitive one. During Obama’s barrier-breaking run, Black voters and young voters helped transform his candidacy into a phenomenon that was equal parts cultural and political, latching on to his outsider image and inspirational calls for unity.

Now, younger Black voters have largely flocked to Sanders and Warren over the race’s Black candidates because their left-wing promises to upend systemic racism and radically reform the economy are much more in line with the language of activism that emerged after the Black Lives Matter movement during Obama’s presidency. Older voters have stuck with Biden, despite Harris and Booker being well liked by Black influencers and elected officials in the Congressional Black Caucus.

Sanders held a rally at Morehouse College on Thursday, the historically Black all-men’s college in Atlanta, where speakers introduced him as the heir to Martin Luther King Jr.’s legacy of racial and economic justice. A group of Black students was positioned behind Sanders as he spoke, and he walked out to “Pick Up the Phone,” a rap song by Young Thug and Travis Scott.

At Warren’s event that day, an evening speech at Clark Atlanta University, another historically Black school, that celebrated the political power of Black women, supporters voiced similar sentiments. They said her message of “big, structural change” was authentic, and they praised her for infusing her policies with corrective measures for racial inequities.

Several students said they had no qualms about supporting a white candidate in a primary field that included Booker, Harris and former Gov. Deval Patrick of Massachusetts, the first Black governor in the state’s history and one of the newest entrants to the primary field.

“Of course Black people want to be pro-Black, but I feel like their records are anti-Black,” said Jesiah Osbourne, a 19-year-old political science student at Morehouse College.

In an interview on debate day, Patrick said his just-announced candidacy was seeing support on the ground from Black voters and that he thought Biden’s lead among them was “softer than it seems.”

“What I’m sensing is not some openness to someone new. What I’m seeing is an openness to me,” Patrick said, invoking his background as a Black man who grew up on the South Side of Chicago.

He had just landed in Atlanta and was on his way to an event at Morehouse. Three hours later it was canceled: Only two people had shown up.

Harris hopes to make 'magic' with Black women in SC

COLUMBIA, S.C. — Aside a wall of 2-foot-tall letters spelling out "Black Women Lead," behind a podium bearing a "Black Women for Kamala" sign,…

After debating about Black support, Democrats fan out to try to earn it

ATLANTA — After a televised debate featuring significant exchanges about race, Democratic presidential candidates fanned out across this capit…

Warren has a plan to win support from Black women

ATLANTA — Winning Black female voters? On Thursday night in Atlanta, Sen. Elizabeth Warren showed she has a plan for that.

Debate clash on race pushes issue to forefront for Democrats

ATLANTA — Democratic presidential candidates put race at the forefront of their primary scramble Thursday, punctuated by a tense exchange betw…

Pete Buttigieg has a problem.

Abrams' campaign pushes back against demand for emails

Pete Buttigieg responds to uproar over past comments on minority students

WASHINGTON — Mayor Pete Buttigieg of South Bend, Indiana, whose lack of support among Black voters poses a continuing threat to his presidenti…