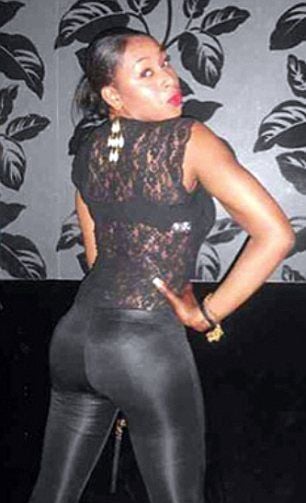 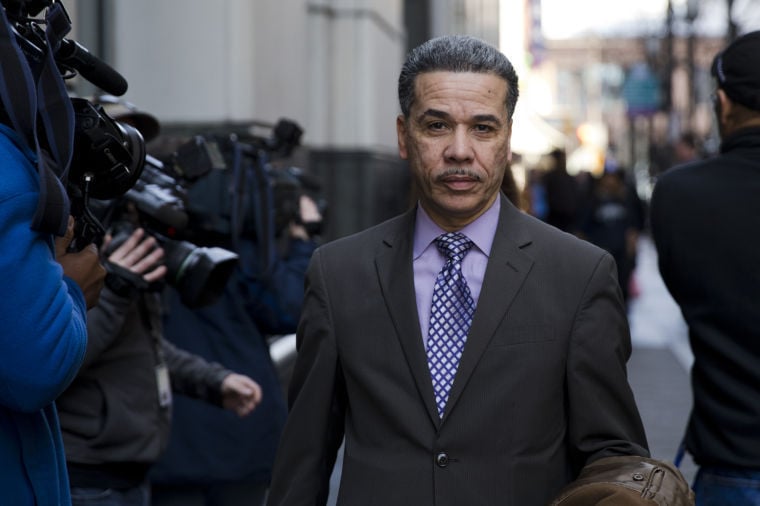 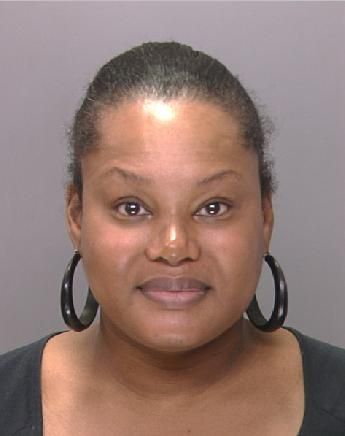 Padge Windslowe, also known as the Black Madam was convicted on Monday of third degree murder, aggravated assault and two counts of possession of an instrument of crime — the needles she used to inject Claudia Aderotimi with the industrial silicone that eventually killed her. — PHOTOGRAPH FROM THE PHILADELPHIA POLICE DEPARTMENT

Padge Windslowe, also known as the Black Madam was convicted on Monday of third degree murder, aggravated assault and two counts of possession of an instrument of crime — the needles she used to inject Claudia Aderotimi with the industrial silicone that eventually killed her. — PHOTOGRAPH FROM THE PHILADELPHIA POLICE DEPARTMENT

Who would travel across the Atlantic Ocean to have silicon injected into their buttocks that would be sealed with Krazy Glue?

As it turns out, two British woman, one of whom said they did it because they wanted “sexier bums.”

A slither of light was cast on the shadowy world Claudia Aderotimi and Theresa Gymfi wandered into shortly after they got off of a flight from Britain in 2011 to find a Philadelphia woman known as “The Black Madam.”

That woman, Padge-Victoria Windslowe, a transgender who boasted of her prowess in reshaping buttocks on the black market, was found guilty of murder this week in a Philadelphia courtroom. It was for the death of Anderotimi, whom she left dying in a Hampton Inn hotel room near Philadelphia International Airport in 2011.

“The women who were victims in this case came from varied walks of life. They thought that by having these enhancements it would make them more attractive and shapelier,” said assistant district attorney Carlos Vega, who successfully prosecuted the case along with ADA Bridgit Kirn.

“And please be mindful of the fact that this case wasn’t so much about what these women wanted or why, but how badly they suffered,” Kirn said.

A 2013 report from the American Society for Aesthetic Plastic Surgery indicates illegal buttocks-enhancement procedures are more common than most people might think. Gymfi testified during the preliminary hearing she and Aderotimi learned about Windslowe online and the report shows it is not uncommon.

“There are even online forums that aim to connect prospective patients with these illegal providers,” the report stated. “An April 2007 question on such a forum received over 14,000 responses. A woman in Georgia who died after traveling to Mississippi for buttock injections in 2012 found her administrator through the internet. She paid an interior director with no medical training $1,500.”

The report goes on to say there have been deaths associated with illegal buttock injections in Alabama, Georgia, Florida, Pennsylvania, Nevada and New York, according to a report in USA Today. The most recent case involves a Florida man named Calvin Butler, who is being referred to as the “motel surgeon,” according to the Sun Sentinel newspaper. Butler was sentenced to eight years in prison after being found guilty of injecting two people, a man and a woman, with substances he claimed would enhance their buttocks, then sealing the injection sites with Krazy Glue.

In New York, law enforcement authorities arrested a woman who was running a similar operation out of her Bronx apartment. Whalesca Castillo was arrested in January 2011 on charges she administered illegal silicone injections as part of a black market business. Castillo also allegedly had no medical license and was charging her clients $1,000 per injection.

In September, law enforcement authorities in Essex County, N.J., said a woman was arrested in connection with the death of a man who received a silicon penis injection from the defendant. Acting Essex County Prosecutor, Carolyn Murray and East Orange Police Chief William Robinson said Kasia N. Rivera, 34, of East Orange, N.J., was arrested and charged in connection with the death of Justin Street, 22, also of East Orange.

Aderotimi and Gymfi paid Windlsowe $1,800 for the first series of injections and returned to the United States for touch-ups several months later. The illegal procedures took place inside a hotel room near the Philadelphia International airport. The procedure sites were also sealed with Krazy Glue, according to investigators.

“We wanted to get into music videos,” Gymfi said when she testified during the preliminary hearing in 2012.

Gymfi, who survived the illegal procedures, chose not to return to the United States for Windlsowe’s trial, but the judge allowed her previous testimony to be entered into the trial records.

“We tried to get her to come back but understand that she was also a victim,” Kirn said. “She was in fear for her own body and her name would be out there. That’s very difficult to face, especially when you consider this got international attention.”

Gymfi told the court during the preliminary hearing they arrived in the United States in November 2010 and stayed at the Hampton Inn.

“We came to get injections to enhance our figures,” Gymfi said.

They had done some on-line research and went to consultations with plastic surgeons in Central London to find out what their options were. Some silicone injections, they learned, are absorbed by the body and require follow-up visits to the doctor. Aderotimi found a website called makemeheal.com where they viewed photographs of women who had the procedure successfully performed. Eventually they made contact with a woman who called herself “Sasha Body.”

“She explained about silicone injections and that she would contact the person who did the procedure, a woman only known as ‘Lillian.’”

Lillian would perform the procedure and allegedly proclaimed she was a nurse practitioner. Sasha set up the meeting for the women for Nov. 10, 2010. There was a referral fee of $300 apiece for Sasha’s services. When the women met each other there was, according to Gymfi, general conversation before the subject turned to the silicone injections.

Vega said the friends were under the impression Windslowe was a medical professional. They were able to prove she falsely presented herself as a nurse practitioner, and unassuming young women trying to make themselves more physically attractive accepted her at face value. The victims thought they were receiving injections of medical-grade silicone, not industrial silicone.

“In 2008 one victim went into a coma for three months as a result of Windslowe administering these injections. At that point, Windslowe went underground; she changed her location, altered her name and changed the name she used when ordering supplies,” Vega said and noted they were able to prove in court a continuing pattern of this kind of behavior.

“When we saw Sasha we were surprised,” Gymfi told the court during her preliminary hearing testimony. “We asked about problems and Sasha explained she’s had it done a few times. We didn’t talk about Lillian’s qualifications.”

The young women asked questions about how the procedure was performed and risks that were involved. They wanted to know how the injections actually worked to enhance a woman’s figure.

“Lillian said she’d had hers for about fifteen years. We believed it was safe. We were confident it was safe,” Gymfi testified.

The first time Gymfi testified in court was without incident. They paid for 1,800 cc’s of silicon that was divided between each buttock — a total of $1,800 apiece. Windslowe allegedly told the women they would have to lie on their stomachs for a few hours, drink plenty of water and eat something after the injections. They returned to the United States in February 2011 for “touch-ups.”

“What happened to Claudia when Lillian left the room?” Vega asked during the preliminary hearing.

“She said it was painful every time she breathed in,” Gymfi said. “She coughed. She said that she felt a pain in her chest when the last needle went in. She said the pain was really annoying. She tried to eat but she couldn’t and a few minutes later she was leaking from the [injection] site. She went to Lillian to have it re-sealed.”

Windlsowe was still at the Hampton, according to Gymfi and was supposedly performing some work on Sasha who had a lump on her buttocks.

“Claudia looked like she was going to vomit,” Gymfi testified. “She was close to tears and said she didn’t feel normal. Lillian came back and asked what was wrong. She pressed Claudia’s chest and said if the pain worsened we should call an ambulance. Lillian left. Sasha said we shouldn’t worry and that if there was a problem they could remove the cotton balls [over the sites] and the silicon would leak out. I could tell she was nervous but she left and I never saw her again.”

Claudia’s difficulty breathing did worsen and so did her coughing. Gymfi called an ambulance and Aderotimi was rushed to Mercy Fitzgerald Hospital. Physicians tried to save her life but were unsuccessful. The medical examiner’s office determined she died from a coronary embolism related to complications from the industrial silicone used in the injections.

In March 2012 Windslowe was arrested amid allegations she was performing illegal buttocks enhancement procedures at her Germantown residence. She was arrested in the middle of a so-called “pumping party.” Police broke up the party before the illegal injections could be administered and quickly learned Windlsowe had no license to perform such procedures. Five other people were present at the residence, according to Lt. John Walker. Officers confiscated needles, paper towels, cotton wool balls, Super Glue and a water bottle containing an unknown substance investigators determined was the substance she was planning to inject subjects with.

Investigators had already focused on Windslowe as a person of interest in the Aderotimi homicide.