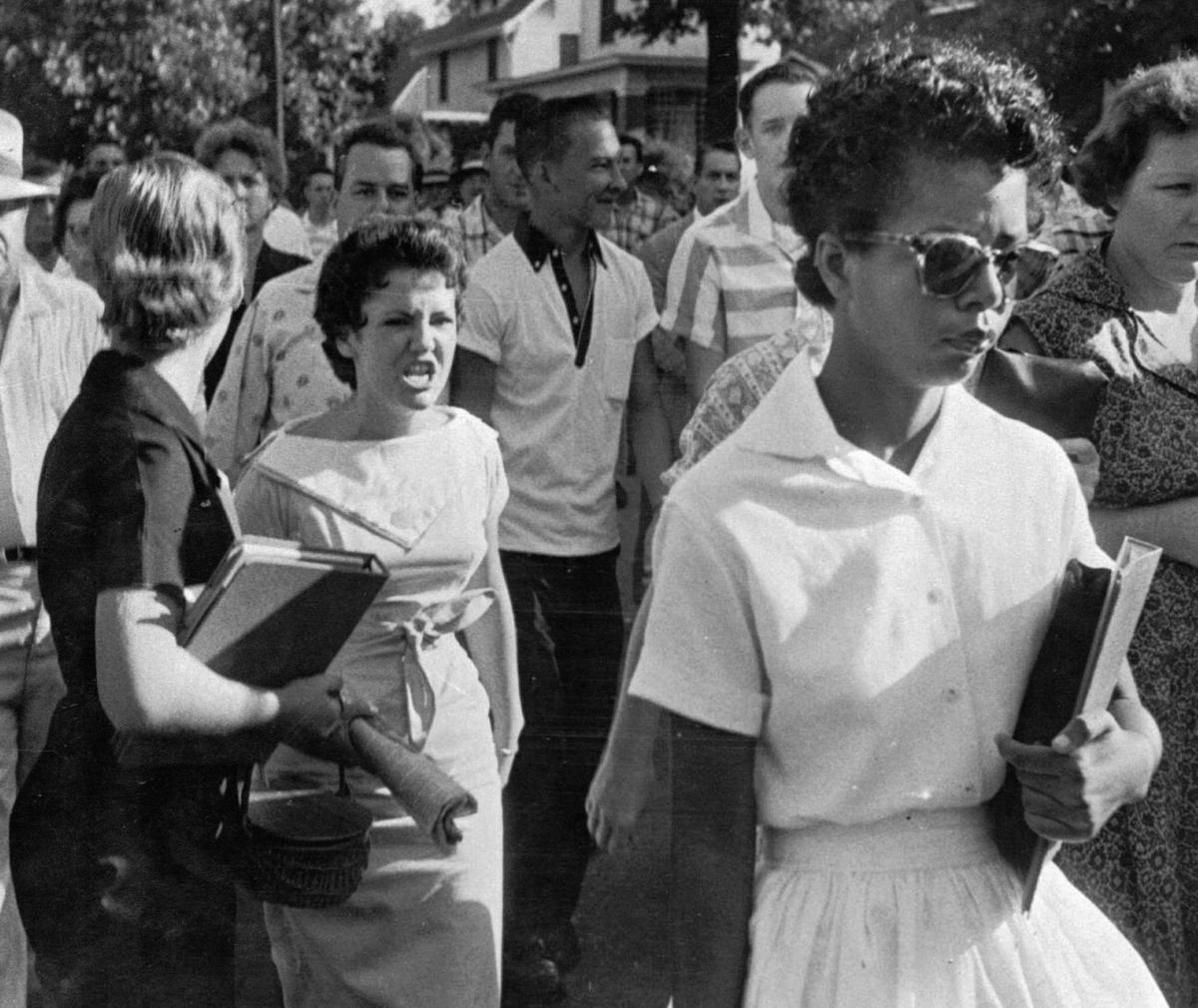 Students of Central High School in Little Rock, Ark., including Hazel Bryan, shout insults at Elizabeth Eckford as she calmly walks toward a line of National Guardsmen.

— Will Counts/Arkansas Democrat-Gazette via AP, File 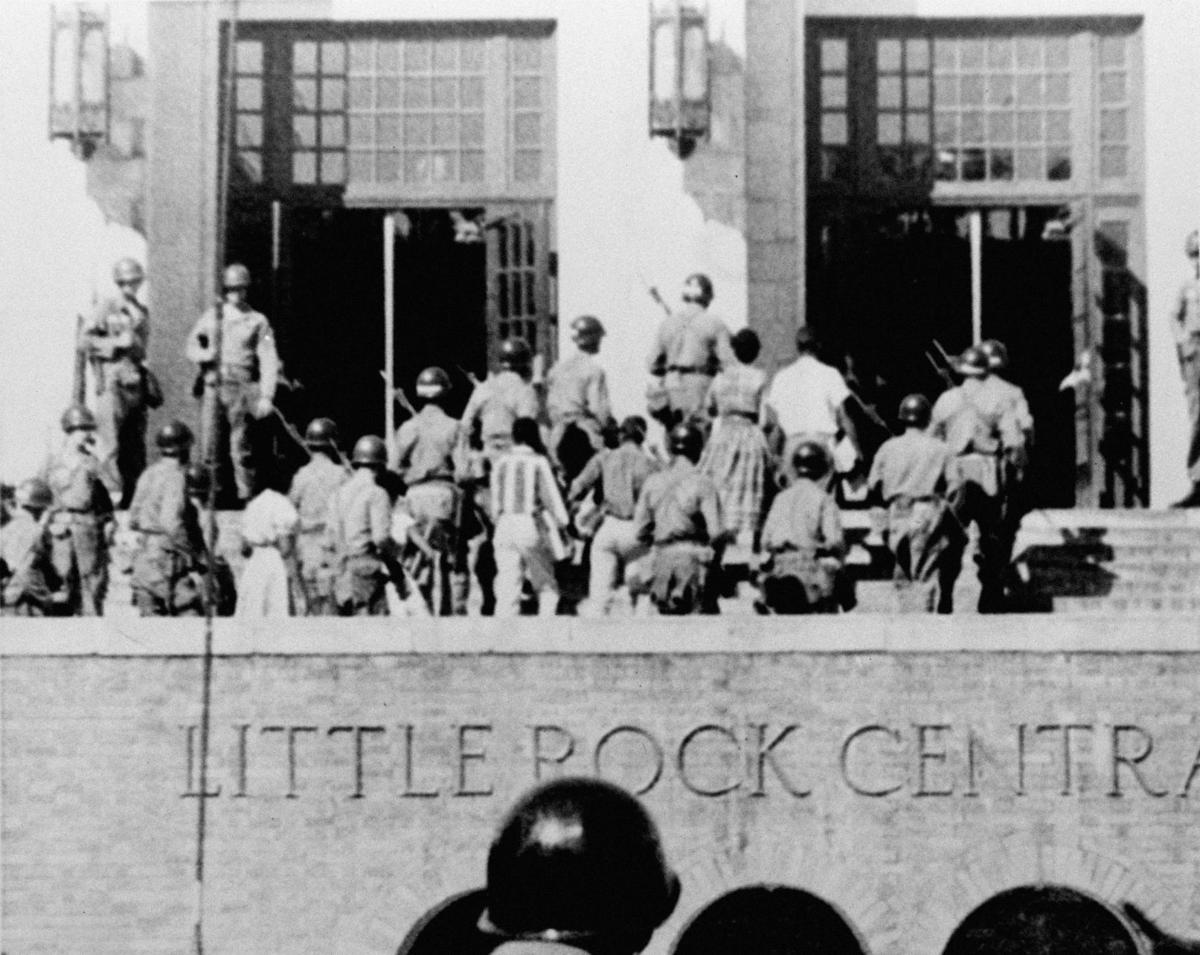 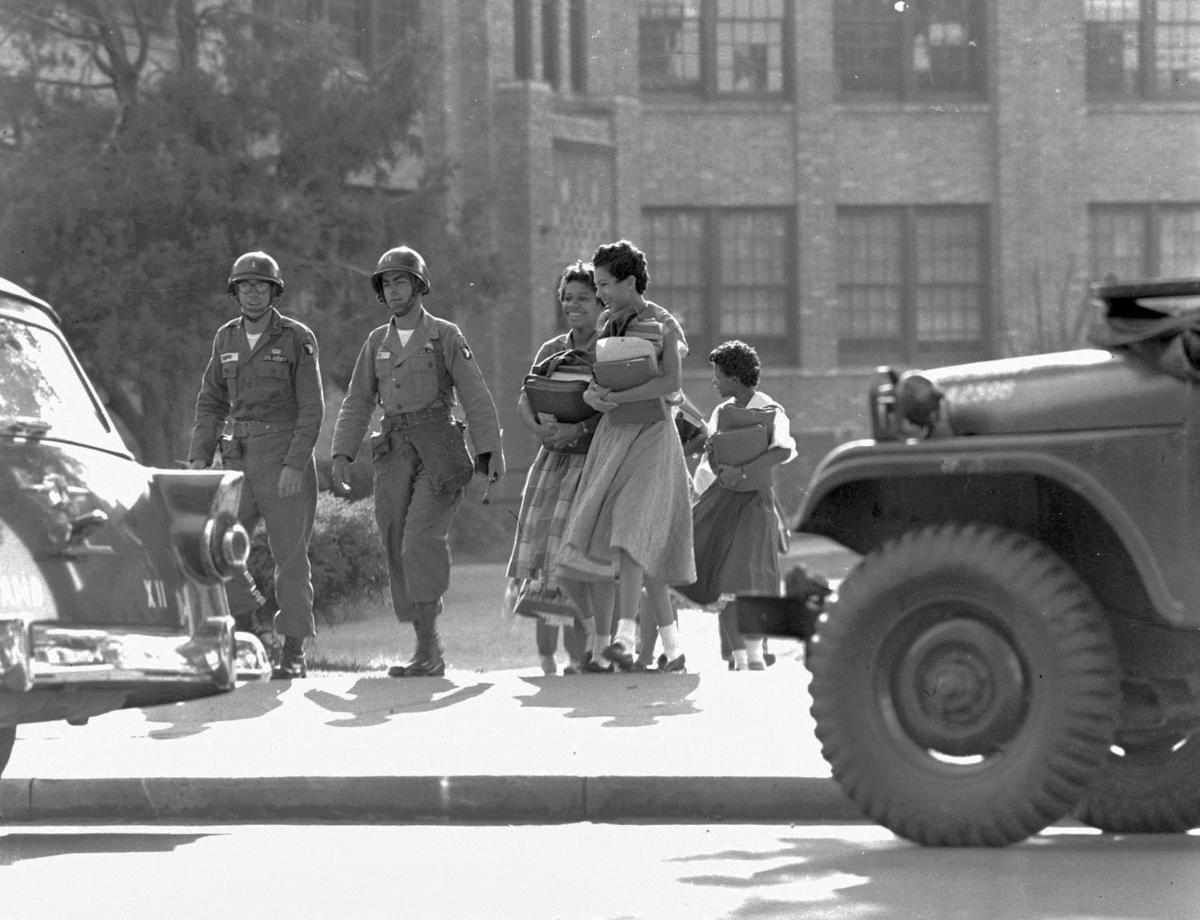 Students of Central High School in Little Rock, Ark., including Hazel Bryan, shout insults at Elizabeth Eckford as she calmly walks toward a line of National Guardsmen.

— Will Counts/Arkansas Democrat-Gazette via AP, File

LITTLE ROCK, Ark. — Among the most lasting and indelible images of the civil rights movement were the nine Black teenagers who had to be escorted by federal troops past an angry white mob and through the doors of Central High School in Little Rock, Arkansas, on Sept. 25, 1957.

It had been three years since the Supreme Court had declared “separate but equal” in America’s public schools unconstitutional, but the decision was met with bitter resistance across the South. It would take more than a decade before the last vestiges of Jim Crow fell away from classrooms. Even the brave sacrifice of the “Little Rock Nine” felt short-lived — rather than allow more Black students and further integration, the district’s high schools closed the following school year.

The watershed moment was “a physical manifestation for all to see of what that massive resistance looked like,” said Sherrilyn Ifill, director of the NAACP Legal Defense Fund.

“The imagery of these perfectly dressed, lovely, serious young people seeking to enter a high school ... to see them met with ugliness and rage and hate and violence was incredibly powerful,” Ifill said.

Six decades later, the sacrifice of those Black students stands as a symbol of the turbulence of the era, but also as a testament to an intractable problem: Though legal segregation has long ended, few white and minority students share a classroom today.

The lack of progress is clear and remains frustrating in the school district that includes Central High. The Little Rock School District, which is about two-thirds Black, has been under state control since 2015 over the academic performance of some of its schools. The district has seen a proliferation of charter schools in recent years that opponents say contributes to self-segregation.

Ernest Green still remembers the promise of the era that put him and the eight other students on the front line. After reading about the May 17, 1954, Brown v. Board of Education decision in the local newspaper, he recalled: “I thought to myself, ‘Good, because I think the face of the South ought to change.’”

He and his classmates came face-to-face with Southern opposition after integrating Central. The first day of school was only the beginning of the hardships they would endure.

Green described the experience as “like going to war every day.” Threatening phone calls came to their homes nightly. Students threw acid on them at school.

“For all of us, we decided that this was a year that we were going to support each other,” said Green, now 76, and the first member of the Little Rock Nine to graduate from Central. “The principal of the school told me at one point ... that I didn’t have to come to the ceremony, that they would mail me my diploma.”

Green ignored his suggestion, knowing the magnitude of his accomplishment. Sitting in the audience at graduation with his family was the Rev. Martin Luther King Jr., then in the throes of the civil rights movement.

For the 1958-1959 school year when the district’s high schools closed — known as “The Lost Year” — the remaining students either went to nearby public schools in the state or out of state where they had friends or relatives, or found other alternatives such as private schools, correspondence courses or early entrance into college.

Terrence Roberts, also one of the Little Rock Nine, said the challenge his former school district now faces is just part of a larger problem nationwide for public education.

“To me it’s a testament to the fact that we as a people have been reluctant to have a meaningful conversation about the need for public education,” Roberts, now 75, said. “When you look at the history of public education, it’s not surprising at all because public education has always been under the gun.”

“One of the important lessons we should take away from Little Rock is just how hard and difficult desegregation has been,” said Ohio State University historian Hasan Kwame Jeffries. “Little Rock does a lot of foreshadowing. It anticipates the efforts by Southern states to find public money to defray the cost and expense of sending white children to private schools. This becomes part of the agenda for the next half-century.”

Overall enrollment in public schools has been declining, and the racial gap has widened, according to NCES. In 2004, 58 percent of students enrolled were white, compared to 17 percent Black and 19 percent Hispanic. In 2014, public schools were 49.5 percent white — less than half for the first time since such data was first collected — 16 percent Black and 25 percent Hispanic.

Additionally, while nearly two-thirds of Black and Hispanic students attend schools with at least 75 percent minority enrollment, only 5 percent of white students are enrolled in similar schools. While public schools are indeed more diverse, that diversity is including a decreasing share of white students.

Community leaders have vented over the “Reflections of Progress” theme that’s been attached to the slate of events marking the 60th anniversary of Central High’s desegregation, saying it doesn’t acknowledge the backslide they’ve seen the district undergo. They’re using the milestone to call attention to the state takeover of the district, comparing it to Gov. Orval Faubus’ efforts to block integration in 1957. — (AP)

“They’re coming back to visit and to see what? They can visit any number of schools where there isn’t any hint of desegregation,” state Sen. Joyce Elliott, a Democrat from Little Rock, said, referring to the eight surviving members of the group, now in their 70s, who will return to mark the day. “For the Little Rock Nine to come back to the same place where they started and the schools are under state control now by the state Board of Education, I think that is something that is the ultimate embarrassment for the state. That is not something to be celebrated, and it is not something to be remotely proud of.”

Some trace much of the current public school debate over school choice to what began in the wake of the Brown v. Board decision as segregationist academies, and later Christian academies, opened throughout the South in response to desegregation.

“There has never been a moment where there has not been vociferous resistance to desegregation,” Jeffries, the historian, said. “They used to couch it in explicitly racist terms. Now, it’s this sort of colorblind language, but the desire remains the same.”

Civil rights lawyer Catherine Lhamon, who now serves as chairwoman of the U.S. Commission on Civil Rights, noted that while meaningful integration happened across the country during the mid-1960s and 1970s, it was only through aggressive federal enforcement. As integration became less of a political priority in the 1980s, re-segregation emerged.

“Local control has never resounded to the benefit of black students,” Lhamon said. “More often than not, it has been a means to mask discrimination and a failure to offer meaningful opportunity to all. It takes federal intervention now, too. That is something Congress promised us and that we have been able to rely on.”

“I would say pause for two years and allow the existing charter seat expansions that have already been approved to take place, allow what’s going on in the Little Rock School District to play itself out, because we have really positive things going on with our academic scores,” Superintendent Michael Poore said before the three charter schools were approved.

Republican Gov. Asa Hutchinson said he believes the district is showing it can innovate and compete with the charter schools.

Ifill said the unlearned lessons of Little Rock remain, and that the 60th anniversary cannot only be about lamenting re-segregation.

“We are living with the consequences of the failure of white people to accept the Supreme Court’s decision to take on integration, and the failure of our larger society to do the work to make this happen,” Ifill said. “Do we want to just observe that we are a segregated society, or do we want to try to do what the Supreme Court told us to do — to understand that education is the foundation of public citizenship?” -