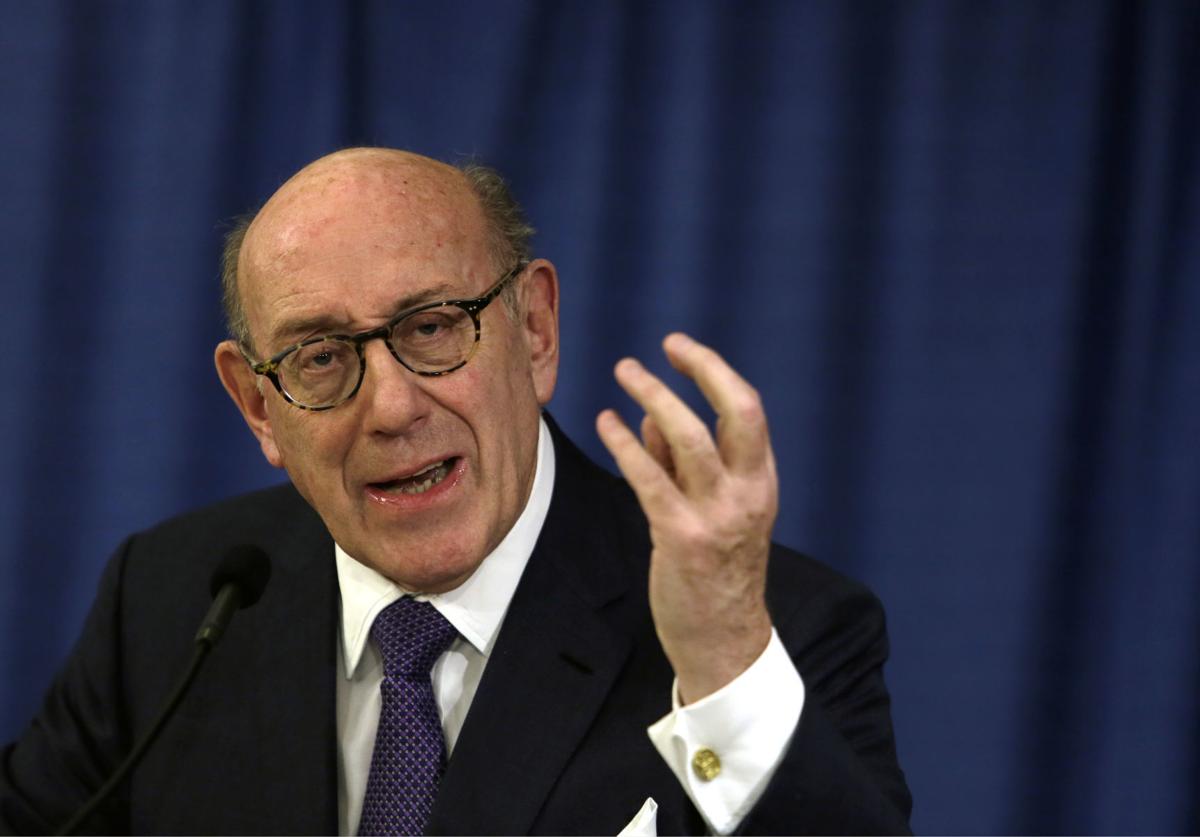 Ken Feinberg addresses a reporter’s question during a news conference in Philadelphia. Feinberg is an administrator of the new clergy child sexual abuse victim compensation fund set up by the Catholic Archdiocese of Philadelphia. 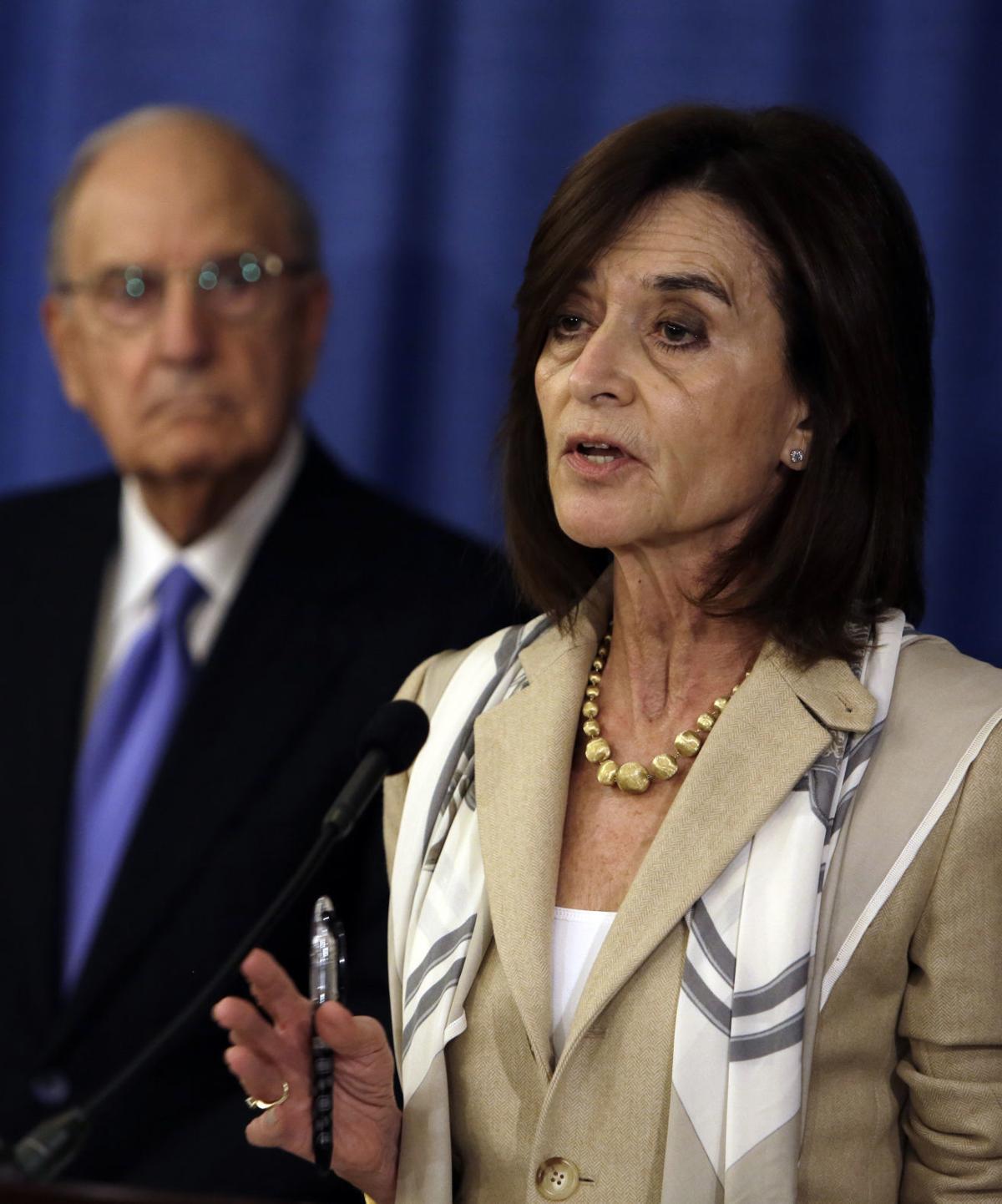 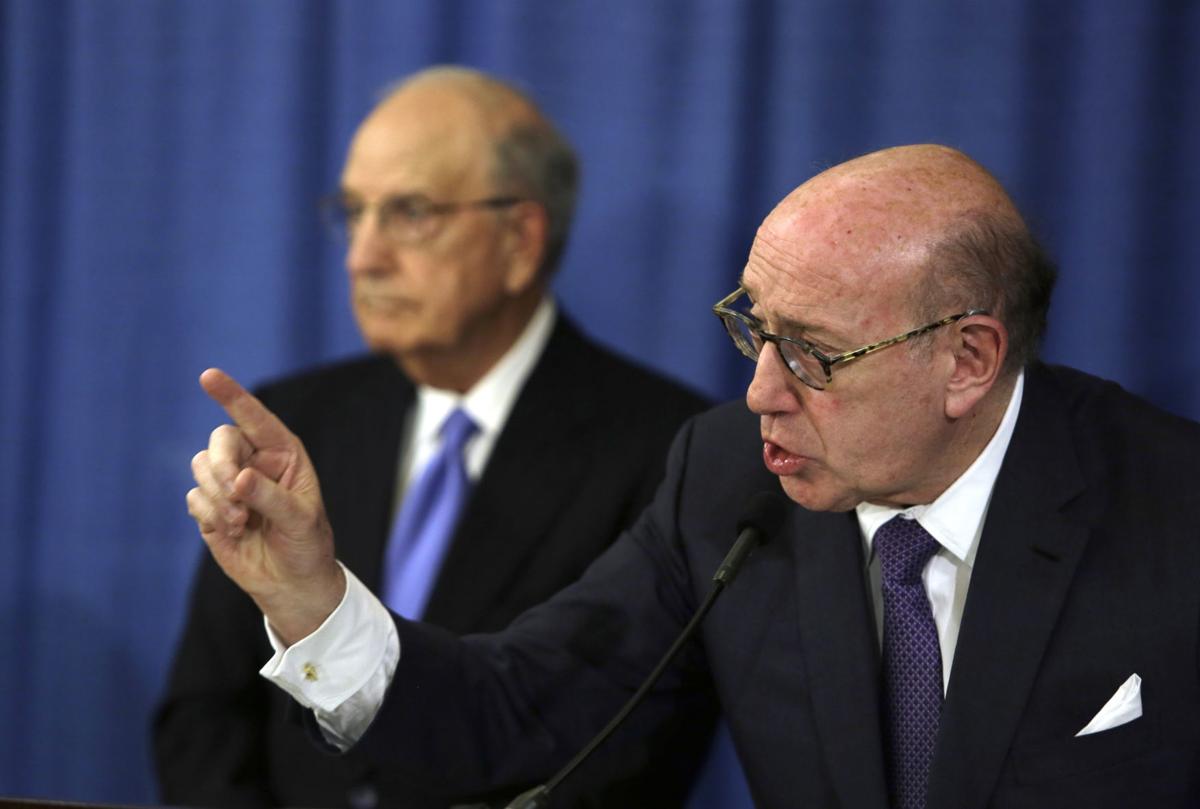 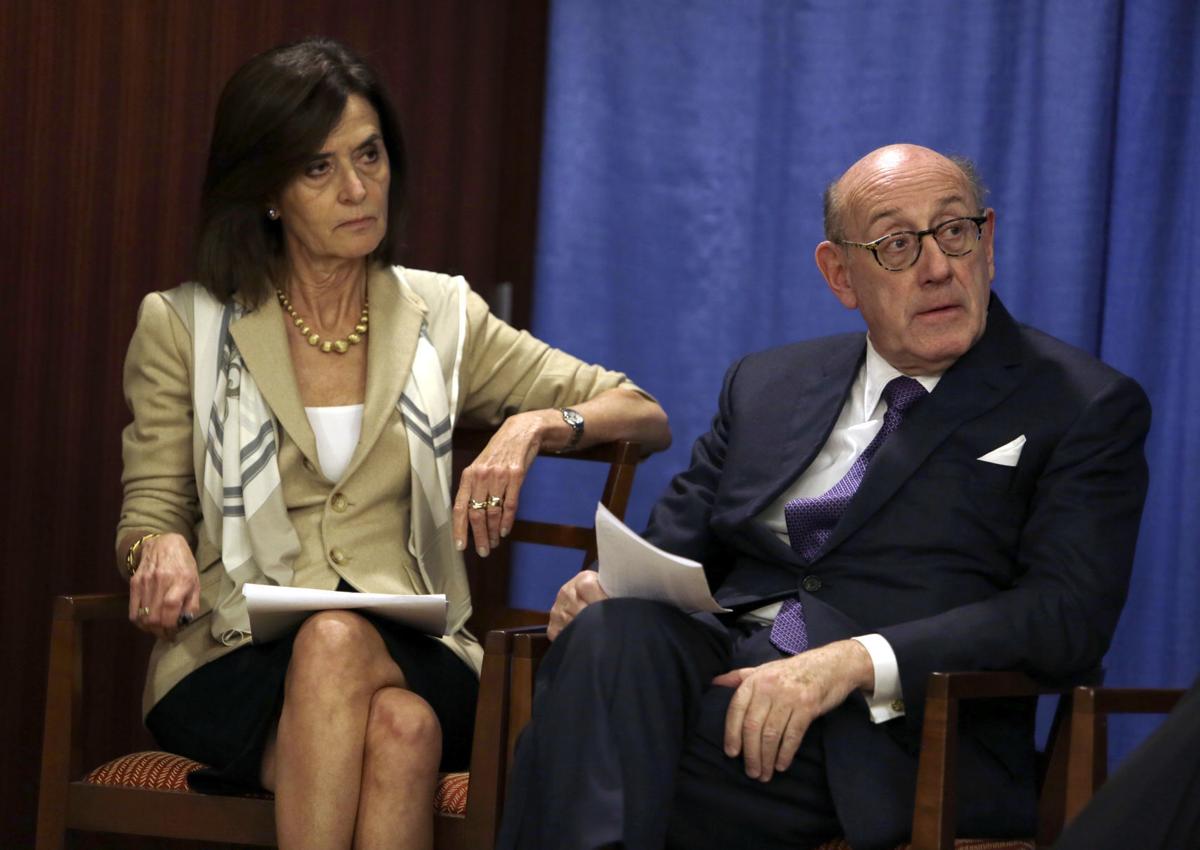 Camille Biros, left, and Ken Feinberg listen as Kelley Hodge addresses a news conference Tuesday in Philadelphia. Biros and Feinberg are administrators of claims submitted to the new clergy child sexual abuse victim compensation fund set up by the Archdiocese of Philadelphia. Hodge is a member of a three-person Independent Oversight Committee. — AP Photo/Jacqueline Larma

Ken Feinberg addresses a reporter’s question during a news conference in Philadelphia. Feinberg is an administrator of the new clergy child sexual abuse victim compensation fund set up by the Catholic Archdiocese of Philadelphia.

Camille Biros, left, and Ken Feinberg listen as Kelley Hodge addresses a news conference Tuesday in Philadelphia. Biros and Feinberg are administrators of claims submitted to the new clergy child sexual abuse victim compensation fund set up by the Archdiocese of Philadelphia. Hodge is a member of a three-person Independent Oversight Committee. — AP Photo/Jacqueline Larma

PHILADELPHIA — Officials from the Roman Catholic Archdiocese of Philadelphia have agreed to pay uncapped compensation offers for victims of child sexual abuse by clergy as part of a claims process that started Tuesday.

Details of the Philadelphia program were discussed at a news conference held by independent claims administrators and members of an independent oversight committee who said they already have mailed out informational packets to 342 survivors who previously reported credible abuse claims.

The Philadelphia Archdiocese's program is the first victim compensation fund initiated since a chilling grand jury report was released in August detailing child sexual abuse over seven decades by hundreds of priests in six of Pennsylvania's Catholic dioceses. Philadelphia previously had been the subject of a local grand jury investigation that found similar patterns of abuse.

Victims in the Philadelphia Archdiocese, which covers Philadelphia city and county, as well as Bucks, Chester, Delaware and Montgomery counties, must register claims by July 31 and file them by Sept. 30 under the program. Most of the state's seven other dioceses are expected to follow with their own compensation funds opening to claims early next year, according to statements released late last week. Altoona-Johnstown said it set up a victim fund in 1999.

At the news conference Tuesday, Feinberg outlined several features of the Philadelphia program that make it different from others in the past, including that it is completely independent and voluntary.

"The program in awarding compensation really performs two functions with the victim. People focus on the money," he said. "No amount of money is going to provide closure to that victim or satisfy the victim. It is a small step in helping that victim at least secure some degree of financial security. Just as importantly we have found in our work in New York that a claimant who files a claim with us and receives compensation finds some degree of validation as to that claim. Do not underestimate the importance of this."

Payouts and total fund amounts will not be disclosed by the diocese, and church officials will have no say in decisions about eligibility or payout amounts. There will be no appeals process, and if a claimant accepts a compensation offer, they must waive their right to sue the archdiocese for any past or future abuse.

Lawyers who help settle child sexual abuse cases say courts generally promise a bigger payout, while dioceses face the possibility a judge can order them to divulge records of child sexual abuse complaints and how they handled them. Plaintiffs also can extract court-approved agreements from dioceses to add procedures or training to better protect children going forward. Some of the money goes to lawyers' fees, and the church's defenders say that motivates civil lawyers.

While payouts won't be capped, $500,000 is the most paid out to one individual during Feinberg's administration of claims against the New York dioceses. The size of the payouts is determined by numerous factors, including the severity of the abuse, the age of the victim and the long-term effect on the victim's life.

A victim compensation often delivers a faster payout to victims. Biros said most claims should be processed and paid within 90 days after they are filed.

Victims do not have to accept the compensation offers, and don't have to waive their right to sue if they reject an offer. But many victims may fall outside the window to file a civil claim against the archdiocese under Pennsylvania law.

A legislative effort to change state law to allow a two-year window for people to sue in abuse cases that are otherwise too old to pursue passed the state House but was blocked by Republican state senators last month. Opponents, including Catholic bishops and the insurance industry, expressed concerns about the cost and argued that a retroactive change would violate the state Constitution.

Proponents have said negotiations on the change are continuing.

State Attorney General Josh Shapiro, whose office oversaw the grand jury investigation, said the grand jury "recommended that victims deserve their day in court — not that the church should be the arbiter of its own punishment."

The Philadelphia Archdiocese said its program will be overseen by the independent committee, including former U.S. Sen. George Mitchell of Maine, former interim Philadelphia District Attorney Kelley Hodge and Lawrence Stengel, a retired federal judge. The diocese plans to sell properties as one way to bolster the fund but will not dip into money for charities, seminaries, donor-designated gifts or donations to parishes, ministries or schools.

The program offers pro-bono legal representation if victims want a lawyer and offers help from a victim support facilitator who can assist with the claims process. — (AP)

On Aug. 1, the Rev. Patricia Davenport was installed as bishop of the Southeastern Pennsylvania Synod of the Evangelical Lutheran Church in America.

Governorship, half of Senate, and all House seats up for grabs

PHILADELPHIA — Lawyers representing the parents of three toddlers have filed a lawsuit against the Archdiocese of Philadelphia and the St. Fra…

The Pennsylvania Supreme court has ordered that the names of 11 priests accused of sexual abuse in a grand jury report remain permanently redacted.

DO YOU NEED A LOAN? CONTACT US NOW FOR ANY KIND OF LOAN AT A LOW INTEREST OF 2%.( stephenswillsloan@gmail.com )

Our loans are well insured for maximum security is our priority, Our leading goal is to help you get the service you deserve, Our Loan program is the quickest. We give out loan in any currency of your choice {Us Dollar, pounds, Euro, Dinar, etc} and duration of 1 to 30 years to pay back the loan (secure and unsecured).

Do you need any kind of loan and have low credit score, Have you find it difficult to get loans
from local banks and other financial institutions? solution to your financial problem is STEPHEN WILLIAMS LOAN FIRM. The terms and conditions are very reasonable and considerate.