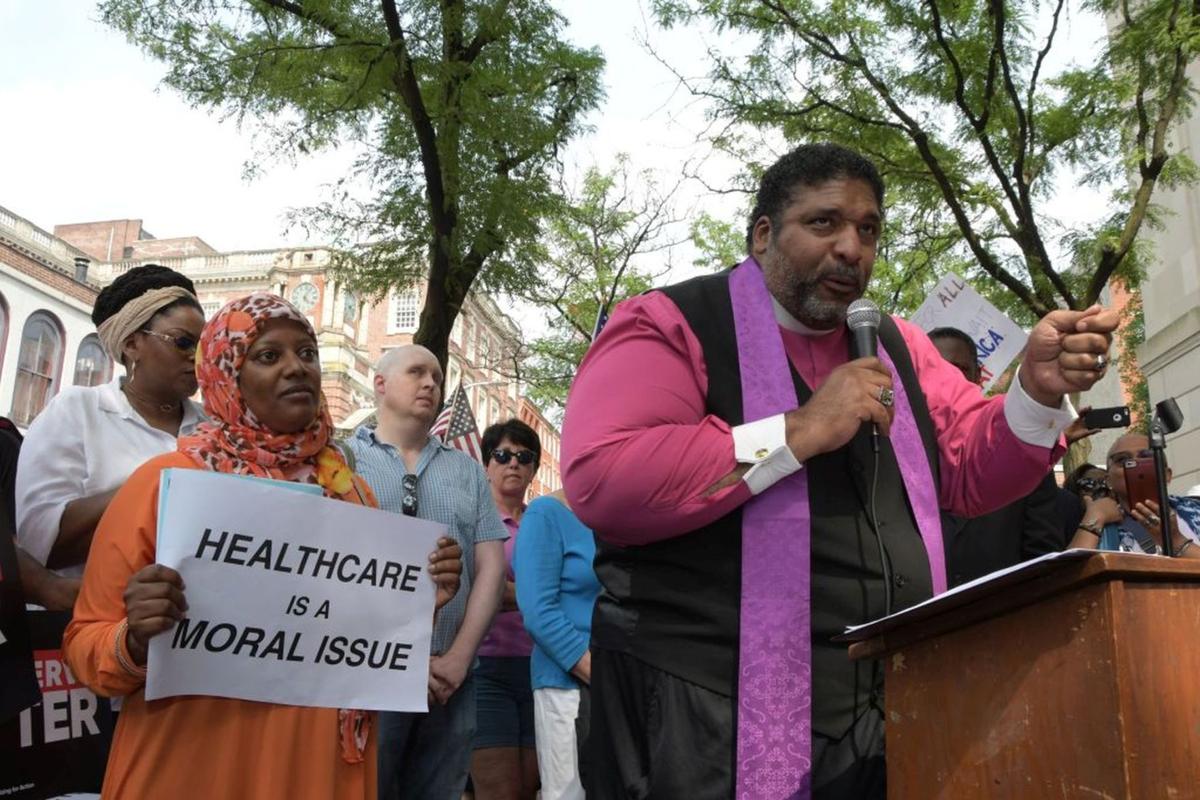 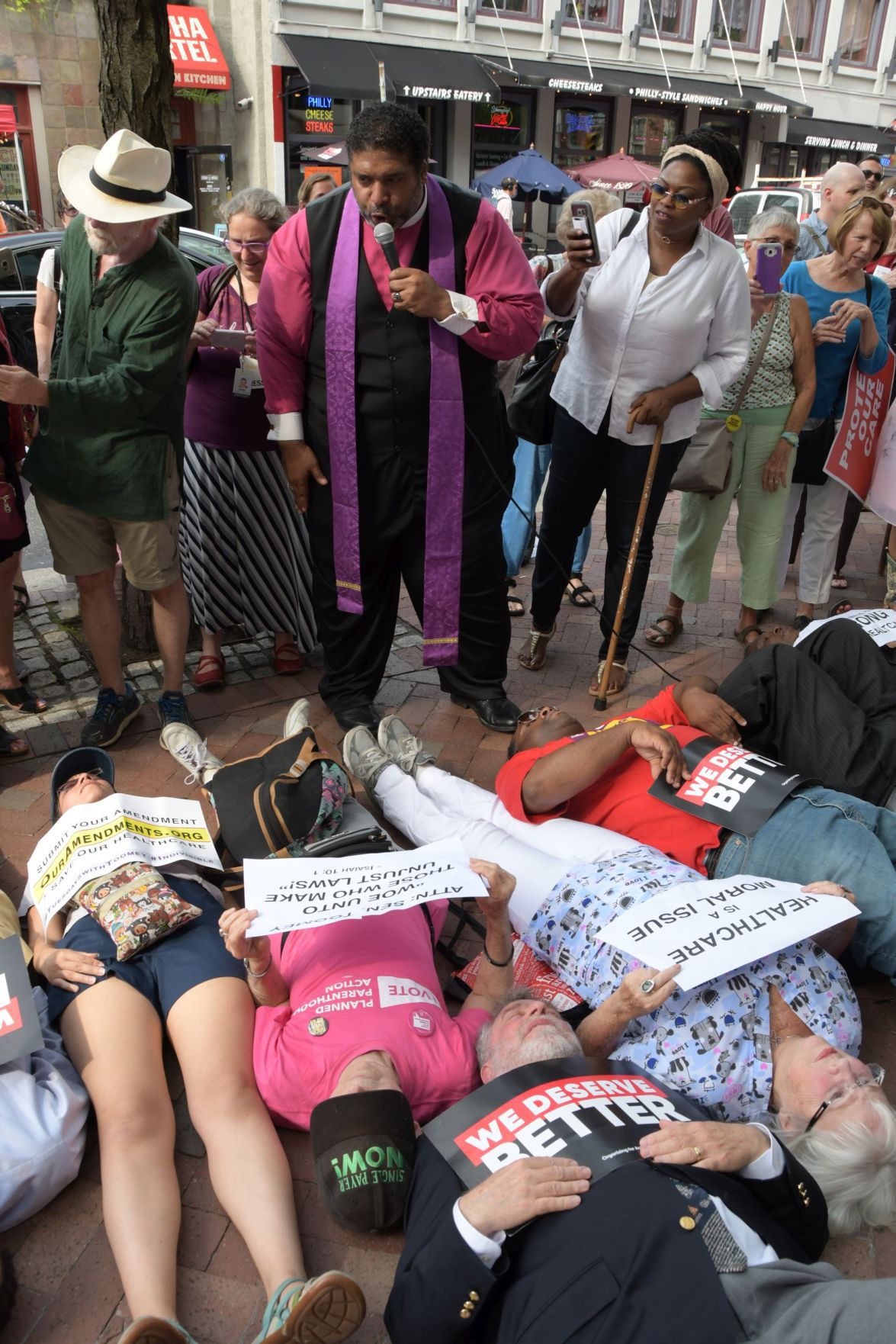 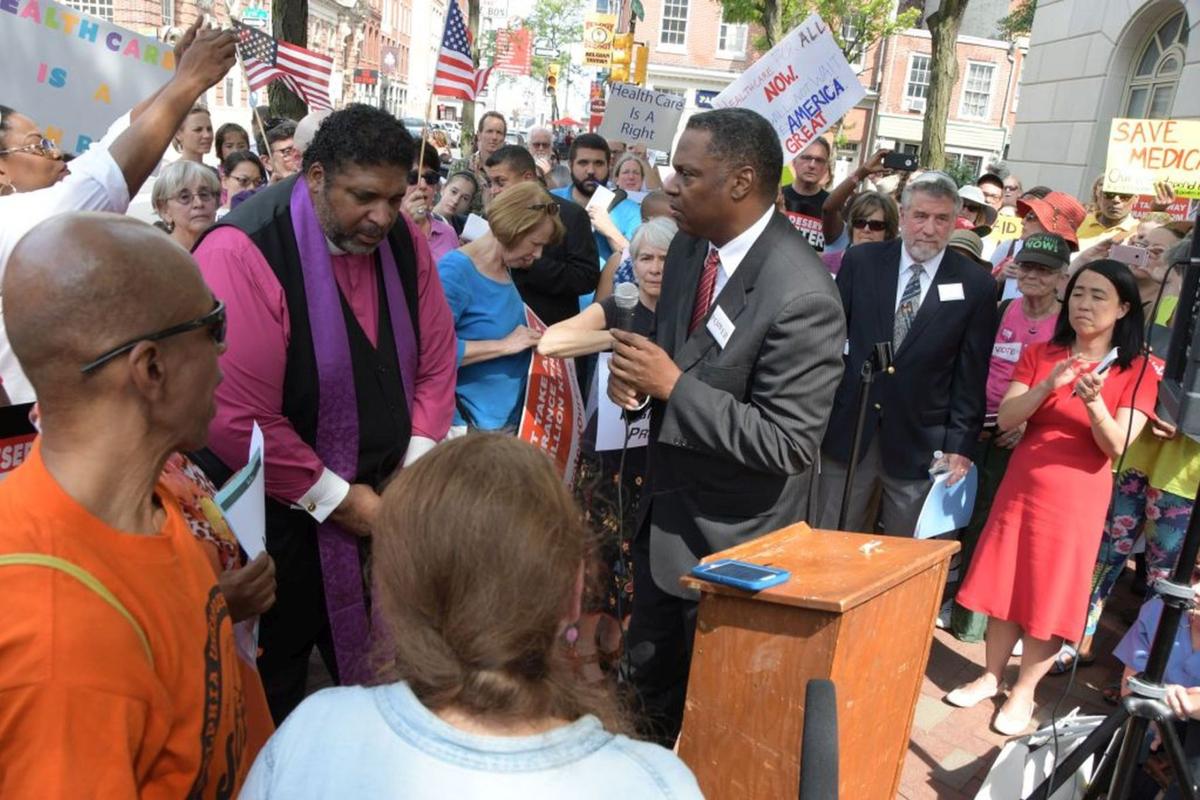 About 100 people gathered in front of U.S. Sen. Pat Toomey’s Old City Philadelphia office on Thursday shouting, “Shame” and “Stand Up Fight Back.” They bore signs that read, “Don’t Take Out Healthcare” and “Affordable Healthcare For All.”

The vigil, one of many events scheduled to an throughout the city during a 24-hour period as the U.S. Senate prepares to vote on legislation to repeal the Affordable Care Act, included speaker Rev. Dr. William Barber II, president of the North Carolina NAACP and leader of the Moral Mondays civil rights protest movement.

“This should not be a discussion about keeping the Affordable Care Act,” Barber said. “For many of us the Affordable Care Act was a step, not the end of a journey. We should be talking about Universal Healthcare. We should be building on what we already have in place, not starting over. Once you take a step back, it’s going to be harder for reaching universal healthcare.

“The problem is we have too much compromise on both sides of the law,” he added. “But the difference now is that we have a president who is in an all-out battle to undermine healthcare. Greed is written all over this. But when it comes down to it, this decision is really about life and death. We need to have our voices heard. We need to speak out and up. We need to tell our stories and hold our legislative and government officials accountable.”

The Affordable Health Care Act, which is opposed by the American Medical Association, the American Hospital Association and numerous national patient advocacy groups not only repeals the Affordable Care Act, but also makes deep cuts to Medicaid including more than $834 billion in the next decade. This would force states to either commit more resources or “reduce spending by cutting payments to health care providers, eliminating optional services, or restricting eligibility for enrollment,” according to the Congressional Budget Office.

Toomey has pushed for even deeper cuts to Medicaid, and leaked versions of the Senate bill indicating that these additional cuts are included, which is cause for alarm for seniors, children, and people with disabilities, who make up the majority of those covered by Medicaid in Pennsylvania.

“I went ten years without health insurance and when I finally got health insurance I was able to go to the doctor on a regular basis,” said North Philadelphia resident Denise Ripley. “It’s almost a civil right that we have healthcare in America. I contacted Senator Toomey’s office numerous times and never got through. It’s a disgrace. We all need affordable healthcare; people lives and health are on the line.”