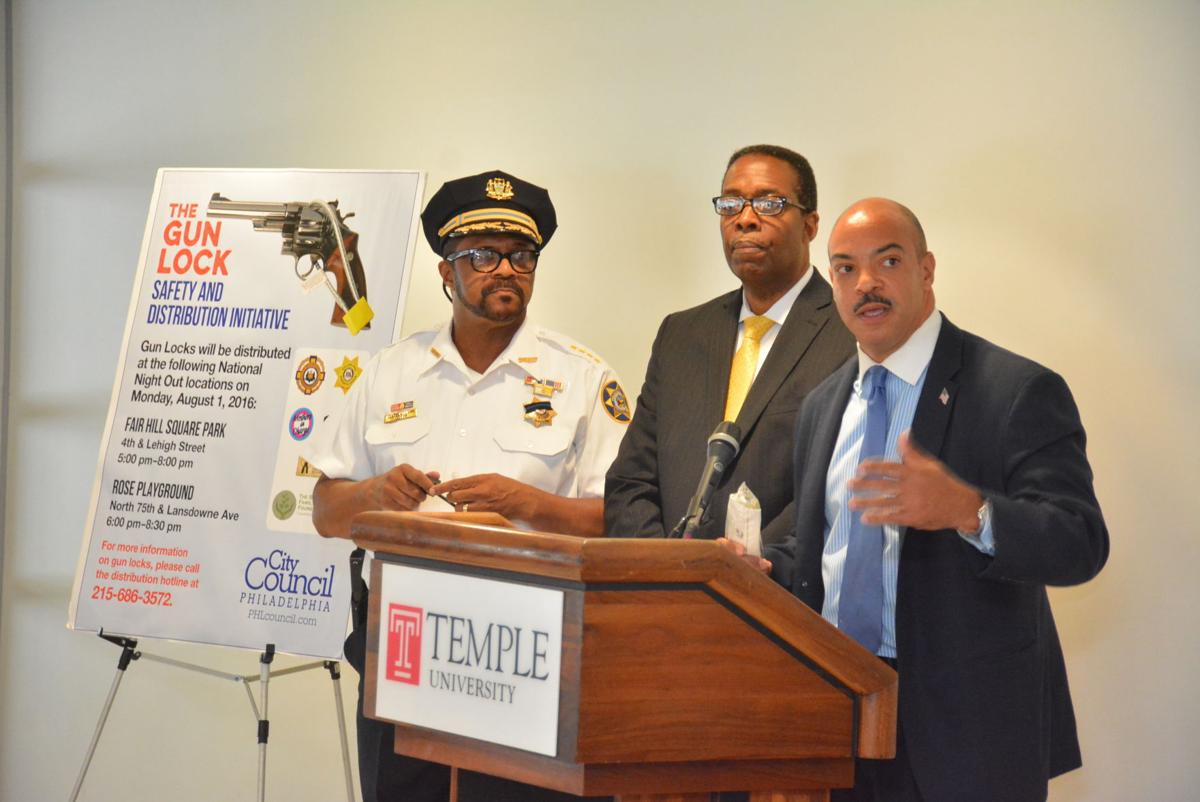 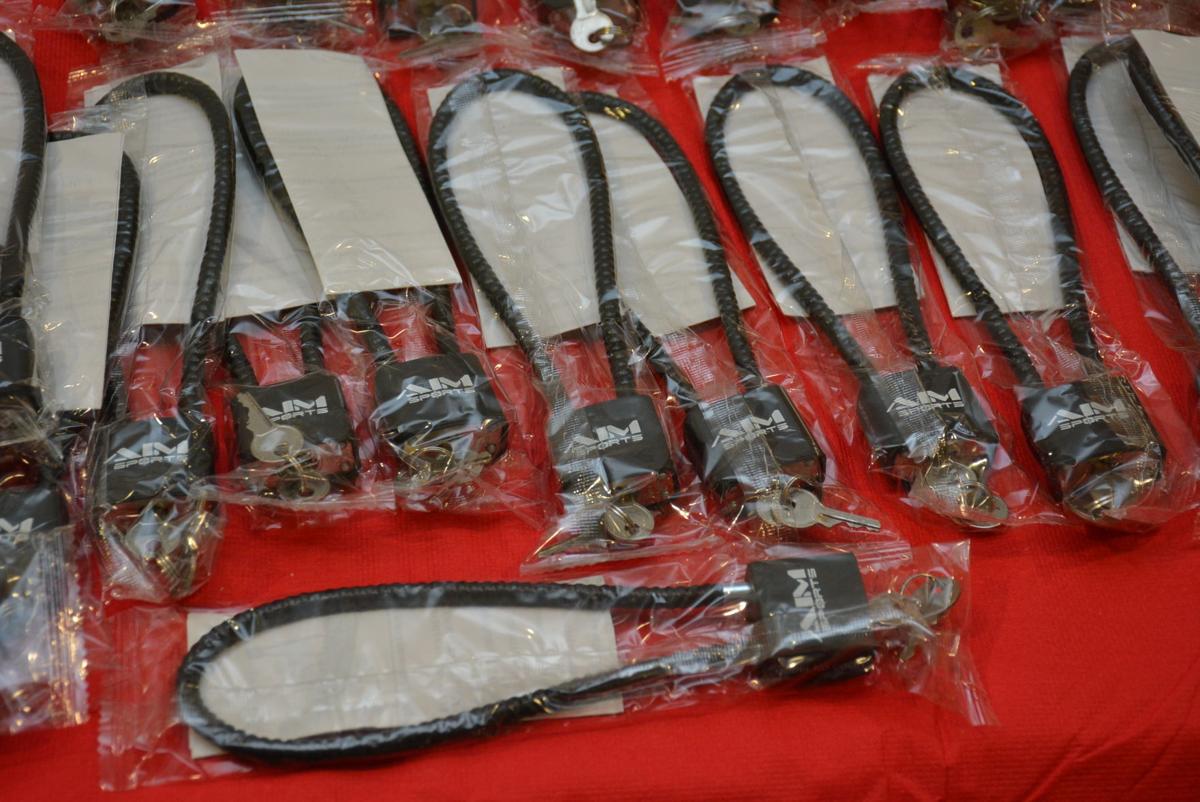 Free gun locks are being handed out to help curb gun violence. 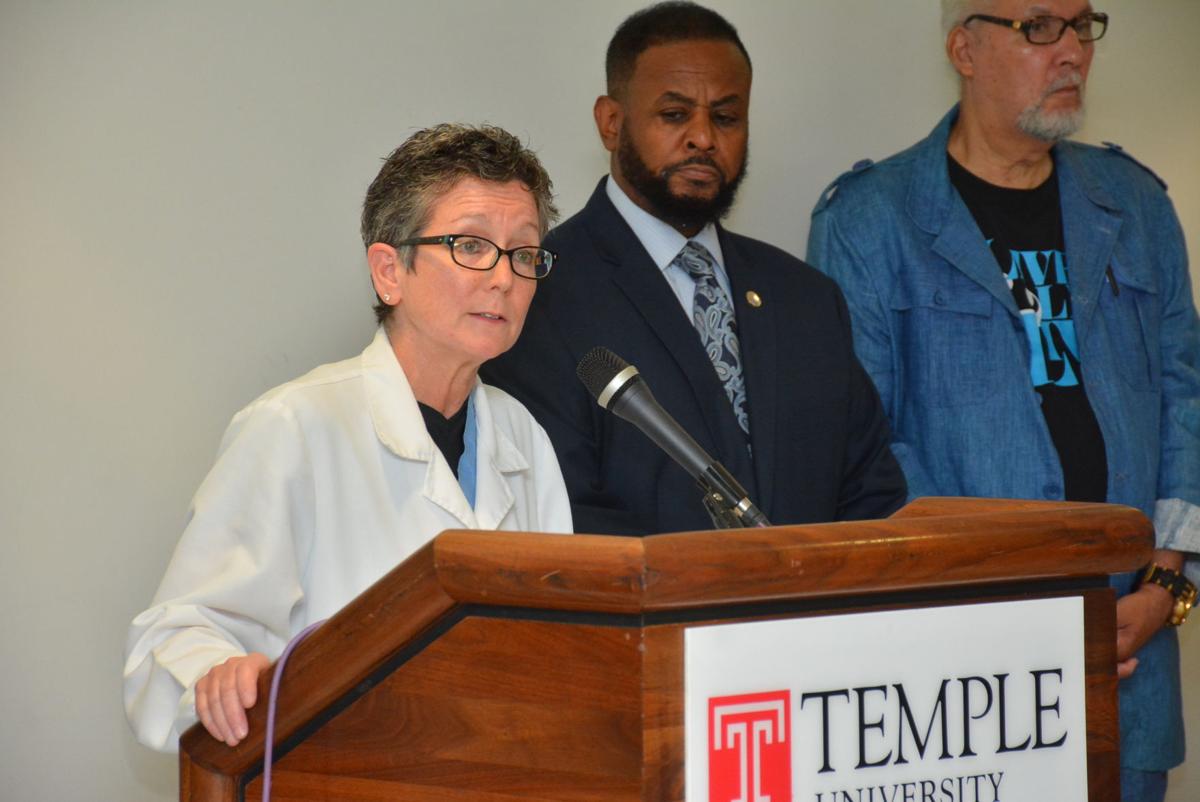 Dr. Amy Goldberg, the Surgeon-in-Chief at Temple University Health System and chair and professor of surgery, along Councilman Curtis Jones Jr. and Bilal Quayyum of the Father’s Day Committee during a news conference for an initiative to give out free gun locks to curb gun violence.

Free gun locks are being handed out to help curb gun violence.

Dr. Amy Goldberg, the Surgeon-in-Chief at Temple University Health System and chair and professor of surgery, along Councilman Curtis Jones Jr. and Bilal Quayyum of the Father’s Day Committee during a news conference for an initiative to give out free gun locks to curb gun violence.

If you own a gun, Philadelphia Sheriff Jewell Williams wants you to put a lock on it. The sheriff said if guns are locked up, a child, or a person who is angry or suicidal, is less likely to harm themselves or someone else.

To promote gun safety—and recognize National Night Out, held each year on the first Tuesday evening in August — Williams announced plans by he and City Council members to distribute approximately 500 free gun locks during three National Night Out events around the city last night and tonight, Aug. 2. The location for tonight’s give-away is 32nd and Cumberland streets, 5 p.m. — 8:45 p.m., in cooperation with the Strawberry Mansion Faith-Based Coalition.

“A gun lock is a tool that can be used to keep the public safe, including children and inexperienced gun owners, regardless of whether the weapon is registered or not,” Williams said. “The message is all about gun safety for everyone, and saving lives.”

“There are few things more outrageous than the death of a child by her own hands or the hands of a playmate or sibling, simply because adults did not act responsibly and keep guns locked far out of reach,” Clarke said. “Children who die in these entirely preventable tragedies are not the only victims. The children who pulled the trigger and the adults who failed to keep them safe must live with an indescribable shame for the rest of their lives.”

The aim of Safe Storage is to give away free gun locks for gun owners — who have guns legally or illegally — and for them to lock up their guns, especially if they have young children in the home. The event promotes neighborhood engagement, public safety and police and community partnerships.

“Locks work,” said CeaseFirePa Executive Director Shira Goodman, whose organization works with people and communities to stand against gun violence. “Obviously a lock doesn’t work if you don’t lock it up.”

Almost three decades ago, Temple University Hospital’s Dr. Amy Goldberg was a young surgical resident when a 4-year-old boy arrived with gunshot wounds to his upper body and was in cardiac arrest.

“We opened his chest and did our best to reverse the devastation caused by the bullets,” said Goldberg, surgeon-in-chief at Temple University’s Health System. “Well, we were unable to save him. He was shot by his older brother with a gun that was left unattended and unsecured in their home. So many tragedies occurred that day and continue to occur in our neighborhoods throughout Philadelphia.”

And again just last week, Goldberg said a 10-year-old girl was shot in North Philadelphia and brought into the hospital.

“Hard to call her lucky after being shot, but she sustained a wound to her arm only and will live,” Goldberg said. “Unfortunately, we here at Temple, as well as the other trauma centers across the city, know far too well the damage that gun violence produces.”

Goldberg continued, “Our patients are killed, left paralyzed from the neck or waist down, unable to walk, breathe on their own or care for themselves. They are left with colostomy wounds that need to be cared for and they are forever changed both physically and mentally, but wounds from guns, guns left unattended, these deaths and injuries can be prevented and must be prevented.”

Councilman Jones, who represents the 4th District, told the audience that he knew of at least 12 or more people who have been shot or killed by guns.

“This gun lock program is essential,” Jones said. “Gun locks add an additional step, an additional thought, an additional action that may prevent someone from doing something that they may regret for the rest of their life.”

Dorothy Johnson-Speight, founder and national executive director of the nonprofit Mothers In Charge, said she knows gun locks isn’t a panacea for gun violence, but acknowledged that it’s a step in the right direction.

“So many lives are being lost today and especially of young children, when they get their hands on guns and there is no lock on them,” said Johnson-Speight, whose son was murdered in 2001. “We want to be out of business; we don’t want mothers to keep coming to our organization because they have to bury their sons and daughters to violence.”

According to the website for the National Association of Town Watch, called National Night Out.