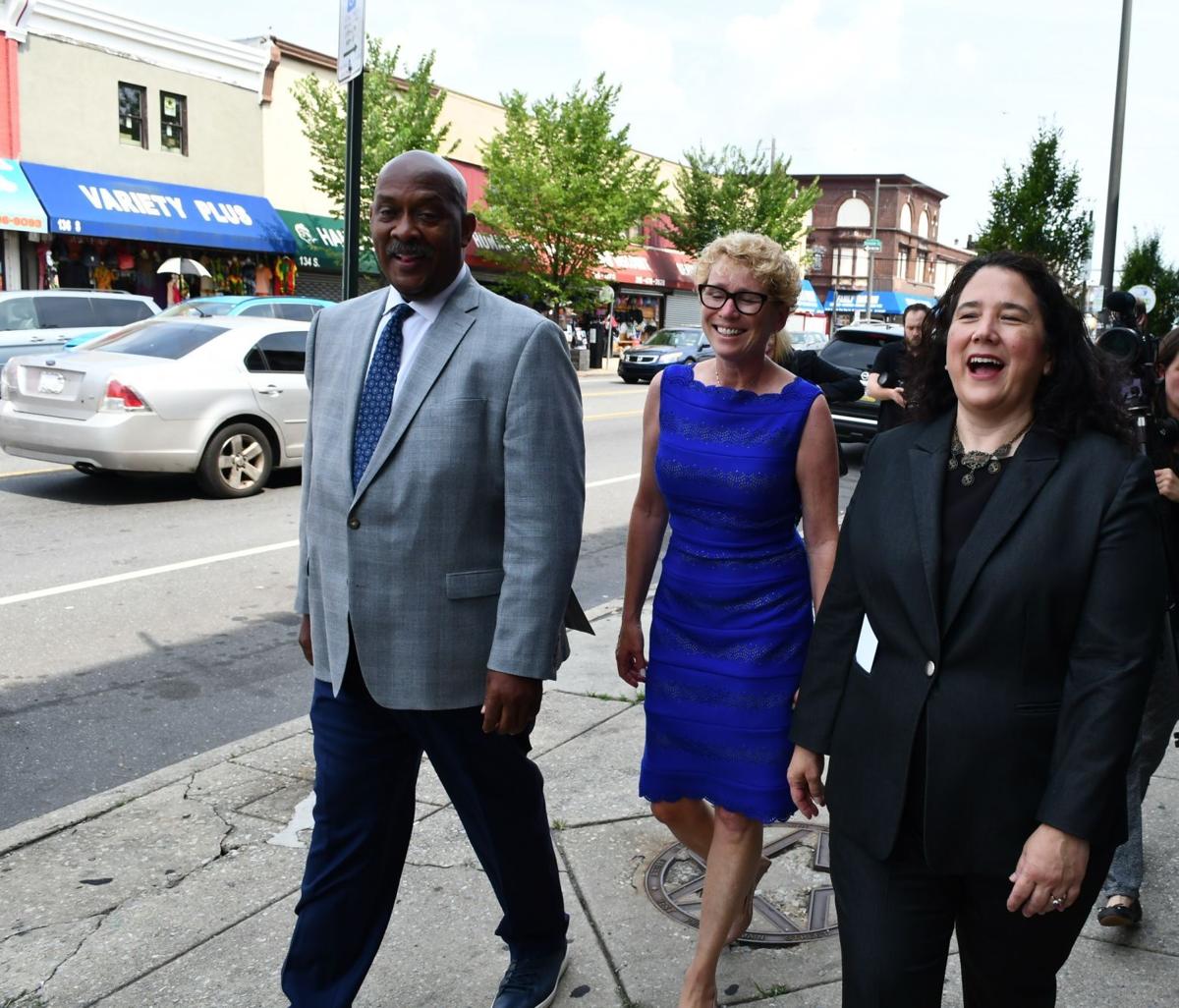 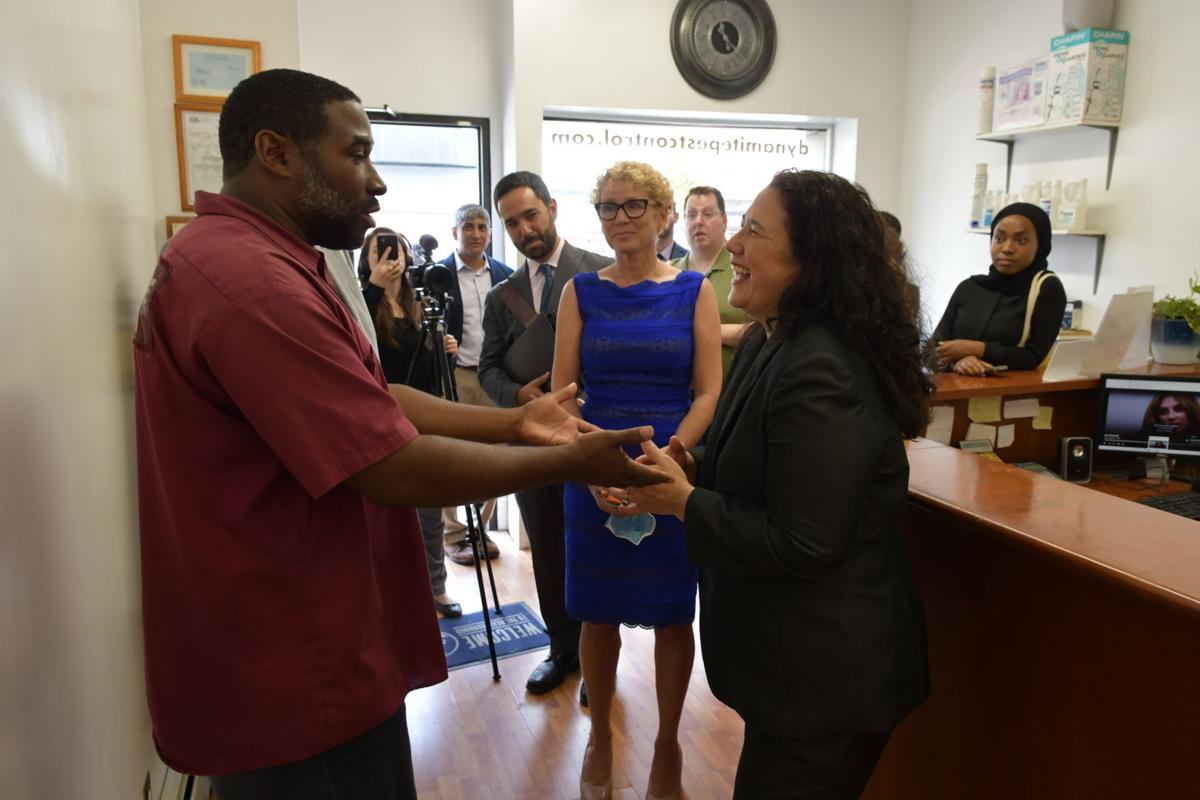 “The SBA has helped us tremendously,” he said, noting that the funding helped him catch up on mortgage payments that were in forbearance.

His business, which was founded by his father Richard Foreman Sr., has been on 52nd Street since 1969. The younger Foreman assumed ownership of the pest control business when his father died in 2008.

She was joined by U.S. Rep. Dwight Evans, D-3rd District, and U.S. Rep. Chrissy Houlahan, D-6th District, who are both members of the House Committee on Small Business.

During their visit, they learned how Foreman’s business fared during the pandemic and benefited from SBA programs.

As he reflected on the Small Business Administration assistance, he recalled the days when his father experienced difficulty securing business funding.

“I’m so passionate about this year versus any year,” Foreman said. “My dad started this business 10 years before I was born. I remember my dad struggling. I remember there wasn’t things for the self-employed.”

“I can honestly say that this was the first year that the government was really like hey, you deserve help,” Foreman continued.

Casillas Guzman also spoke with Tiffany Ward, the owner of NV My Eyewear on 52nd Street. During the visit, Ward offered some insight on how her business benefited from EIDL and Paycheck Protection Program (PPP) funding during the pandemic.

After the walking tour, Casillas Guzman, Evans and Houlahan participated in a closed roundtable with small business owners at The Enterprise Center.

She traveled to Philadelphia to showcase the success of businesses participating in the SBA’s economic relief aid programs.

“I’ve been traveling across the country just trying to visit with businesses who either received relief or didn’t receive relief and try to understand what they need now to continue to survive this disaster that we are still in, in terms of recovery from COVID,” Casillas Guzman said during an interview with the Tribune.

“We know that we’ve made a lot of progress in the American Rescue Plan in getting shots in arms so that people could get together at businesses again and return to work in a way that allows small businesses to open.”

She had the opportunity to interact with a diverse group of business owners while visiting Philadelphia and learn about what they need to survive into the future.

“I have heard quite a bit from the businesses in Philly,” Casillas Guzman said.

“What I’m hearing is that a lot of businesses need affordable capital and something that works for them in their business and so the SBA is looking at all of its programs.”

“What’s known is that businesses want revenue opportunities,” she said. “They want to be able to lift themselves up and prove their motto out. I think that the SBA is really committed to trying to create those opportunities for them, whether its contracting and President Biden recently announced an expanded commitment to help disadvantaged businesses get more federal contracts with tripling the goal from five percent to 15 percent over the next give years.”

“So it’s really about access to revenue and opportunities to grow and build back better than they before because we want to see that growth equitably around all of our communities,” Casillas Guzman continued.

She touted SBA initiatives for businesses impacted by the pandemic such as the $28.6 billion Restaurant Revitalization Fund, Shuttered Venue Operators Grants and EIDL programs.

Tess Hart, co-owner of Triple Bottom Brewing, said they received two rounds of PPP funding. The first round ensured that they could pay their employees to stay home and be safe. Their employees were back onsite, when they secured the second round of funding.

“By the second round of PPP we had folks back in here and that really helped us offset the cost of payroll because we pay a living wage here,” Hart said.

“So we pay a lot more than industry standard and during COVID we weren’t bringing in a ton of revenue so it was expensive to do that, but we didn’t want to sort of violate that commitment that we made to our team here, so the PPP really helped us keep that going.”

“The Revitalization Fund was just this wonderful gift that allowed us to really think about rebuilding in a way that felt safe and less day-by-day,” she continued.

“We could pay off some credit lines and it didn’t feel like we were just like hemorrhaging money on expensive credit and get this place reopened again.”