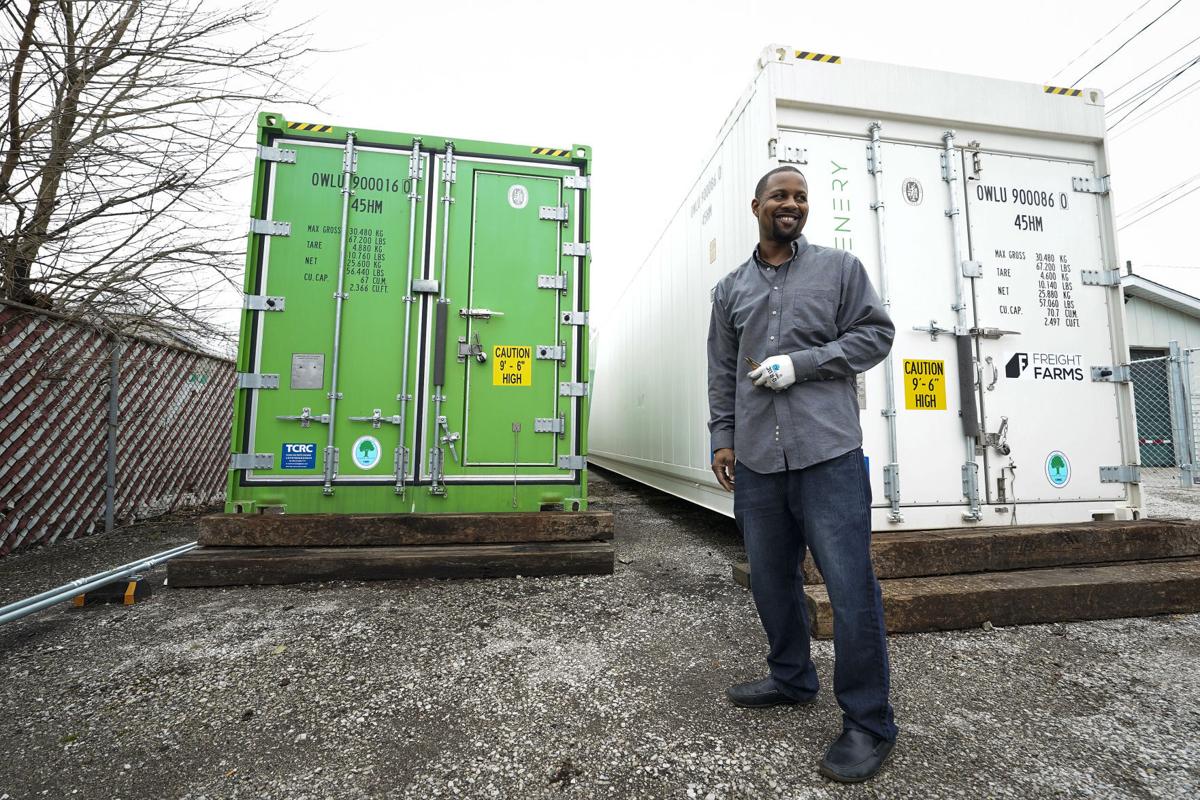 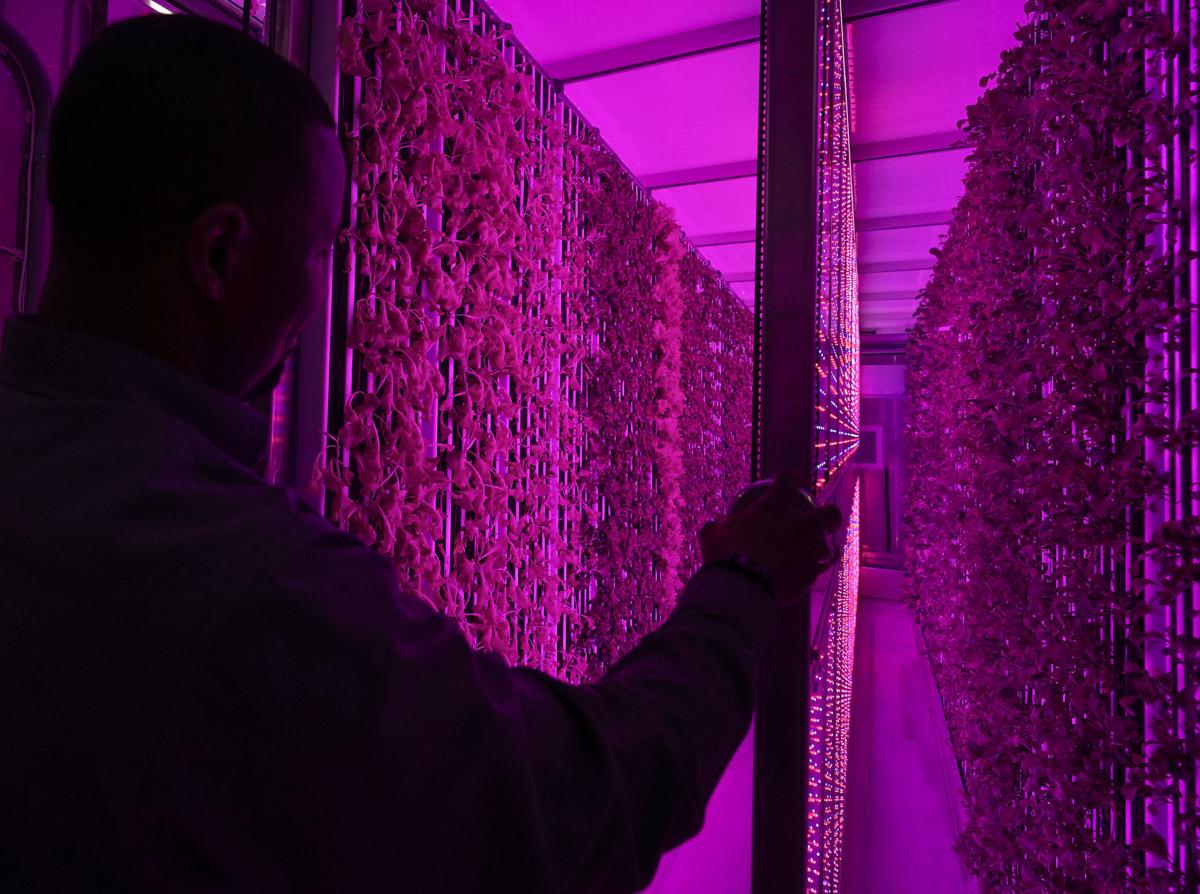 INDIANAPOLIS — An unassuming plot of land sits on the east side of Indianapolis on 30th Street. From the outside, it looks like an empty lot with a couple of shipping containers on it. But inside those containers is an entire garden.

And among the plants, you can find DeMario Vitalis.

Vitalis was the first in Indiana to own this type of hydroponic farm inside of a shipping container. The unique method involves planting seedlings of plants such as herbs and lettuces on vertical panels and feeding them controlled levels of water, nutrients and light — no soil required.

It’s a mode of farming uniquely suited for urban environments. Vitalis is able to produce almost 5 acres of food a year from two 40-foot shipping containers. It also uses 99% less water than traditional farming, according to the company that makes the containers.

Vitalis sells his fresh herbs, lettuces and more to people in the community through online platforms such as Market Wagon.

The climate control is a huge advantage for Vitalis, who set up his farm, called New Age Provisions, in the latter half of last year. Regardless of the outside weather, he can grow anything he wants.

“It can be 30 degrees outside and raining,” he said, “but inside it’s 65 degrees. In here I’m watching Netflix and planting seeds.”

Even though he now spends much of his time dedicated to plants, Vitalis wasn’t a farmer when he started all of this. He was just an entrepreneur looking for his next project, and farming — which connected to his history as a descendent of enslaved people and Southern sharecroppers — felt like the right choice.

“It was just a way to become an entrepreneur,” he said, “and also get back into the type of occupation my ancestors once had.”

Vitalis was looking for something that would put a piece of property he owned to use, and he had a hunch shipping containers were key.

At first, he thought he would set up some modular tiny homes built out of containers. But then he came across Freight Farms, a Boston-based company that could cram 2.5 acres of production into one shipping container, and the decision was made.

Although born in San Francisco, Vitalis’ family is originally from the South, and he moved around quite a bit before settling in Indiana.

“Three of my four grandparents started off from the South,” Vitalis said, “So we were part of that Black migration when we moved eventually from the South to San Francisco on the West Coast.”

After living in Germany, Kansas and other places as his stepfather moved around with the military, Vitalis’ mother decided to move him to Indianapolis, where he stayed and attended Arlington High School and Purdue University.

Vitalis’ mother Barbara Johnson is a cook, so food has always been important to the family. And the herbs and vegetables grown by her son, she said, are “absolutely wonderful.”

Vitalis was one of the first Black owners using a Freight Farms shipping container to start a small business in the country.

Despite two degrees from Purdue University and a Master’s degree from Wayne State University, Vitalis doesn’t have a background in farming, and had to put himself through some education before diving into his urban farm. He took online classes and even visited Freight Farms in Boston to learn about the equipment and process.

After some research, Vitalis found that the U.S. Department of Agriculture will supply loans for these types of businesses, so he requested $50,000 to help him pay for one container and was promptly denied.

The people evaluating the profitability of these containers simply didn’t understand how it worked or how much it could produce, he said. But instead of giving up, he pushed back. Black farmers have historically been discriminated against when trying to obtain USDA loans, and he was motivated to make sure his business plan was being fairly evaluated.

Vitalis appealed the decision and won. Then, he turned around and asked for $200,000 instead — and got it.

Finally one day, a semi-trailer pulled up outside his property with the containers, picked them up with an enormous crane and plopped them right down behind the nearby building.

At first, the plants start as seedlings or seeds and are placed on shelves under LED lights, and water flushed with nutrients is dispensed to them with attached machines.

Although the space may seem tight, one container can output the equivalent of 1,000 heads of lettuce each week, Katsiroubas said.

And throughout the whole process, Vitalis controls the light, temperature, nutrients and water. The plants live in a perfectly contained ecosystem that’s never under threat from drought, flooding or pests.

It’s a big advantage, he said, because he can grow food year-round and he doesn’t have to worry about pesticides or herbicides. It’s also “hyper-local,” he said. When he gets an order, the food comes from the planter into the customer’s hands within a matter of hours.

Nobody was surprised that Vitalis made New Age Provisions happen.

He’s always been a trailblazer and hard worker, his mother said. She thinks it’s something he may have picked up from her, since she worked multiple jobs and attended school while caring for him and his siblings.

“I’m even more amazed with my son,” Johnson said. “He’s satisfying a need in the community and following a dream. It was his vision and he brought it to fruition.”