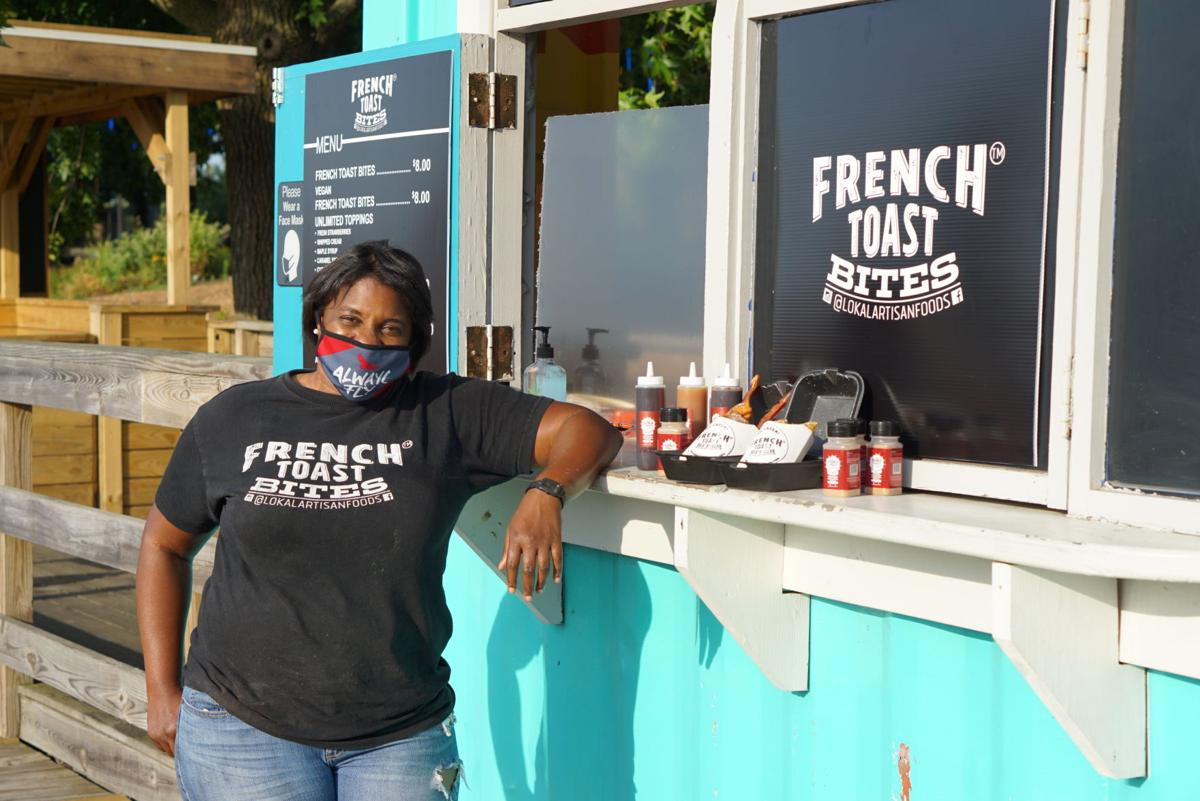 Charisse McGill said the support has been “overwhelming” since she joined the Spruce Street Harbor Park’s summer lineup. — Courtesy of Aversa PR 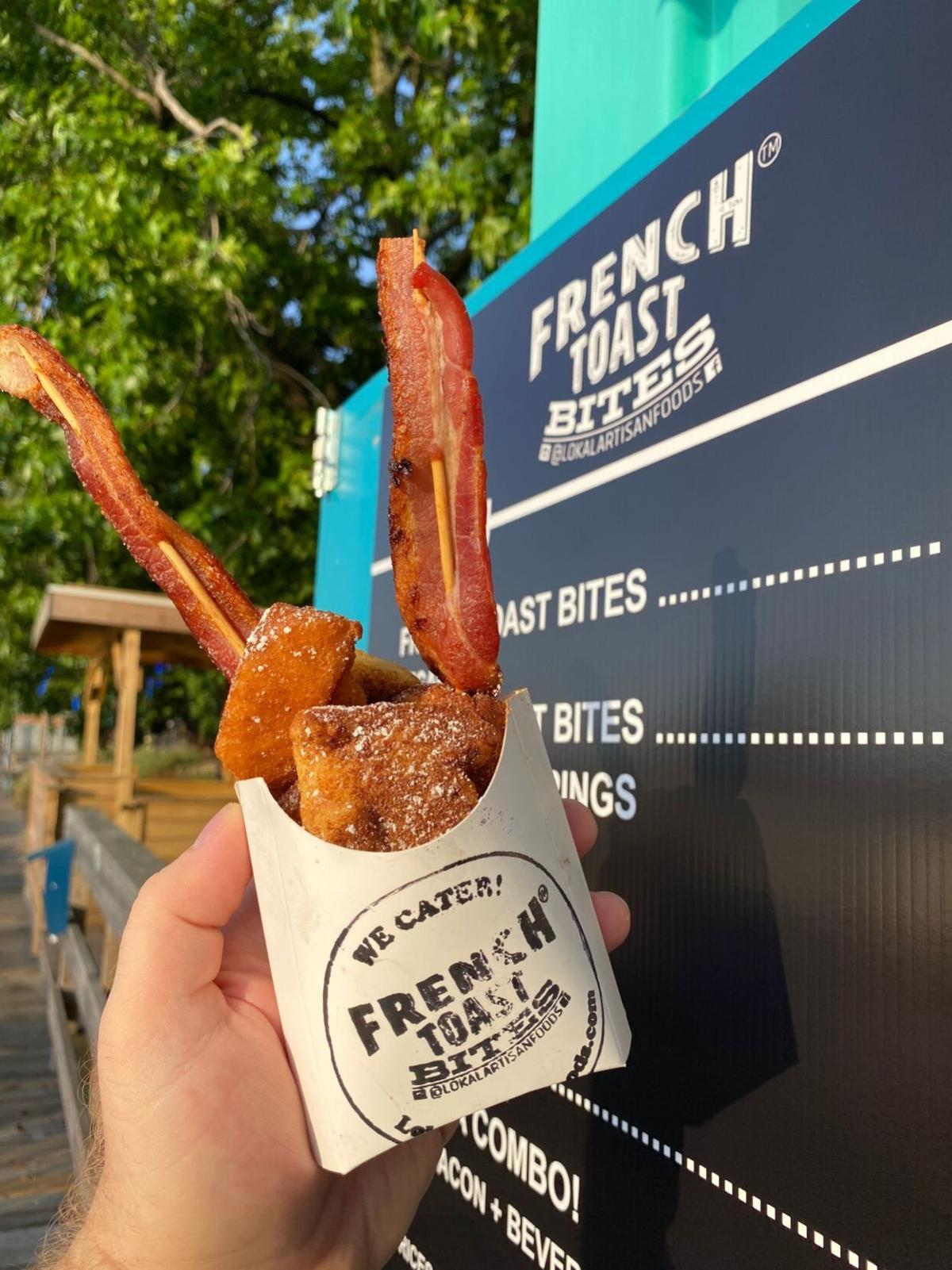 Charisse McGill serves up French Toast Bites and bacon (on a stick) at the Spruce Street Harbor Park. — Courtesy of Aversa PR

Charisse McGill said the support has been “overwhelming” since she joined the Spruce Street Harbor Park’s summer lineup. — Courtesy of Aversa PR

Charisse McGill serves up French Toast Bites and bacon (on a stick) at the Spruce Street Harbor Park. — Courtesy of Aversa PR

The sweet scent of cinnamon is now lingering in the air of Philadelphia’s Spruce Street Harbor Park.

Charisse McGill, owner of Lokal Artisan Foods, has brought her signature French Toast Bites, bacon (on a stick) and a new French toast milkshake to the tourist destination on Penn’s Landing.

The move makes her the first African-American female vendor to operate a food establishment at the park in its six-year history.

“It’s definitely an accomplishment,” McGill said. “I think it speaks to my purpose to be a trailblazer and continue to be an inspiration to others and food operators and chefs in the space because we don’t see a lot of ourselves in the top tourist attractions in Philadelphia.”

Owner Joe Modestine saw McGill featured in a television segment about the park, and reached out.

“I said, ‘I think it would be really cool if we partnered up and did a French Toast beer because she’s somebody I would want to work with,’” Modestine said.

They plan to produce a variety pack of four different beer flavors. The first flavor is scheduled for release early this month and will be sold by beer distributors throughout the region.

“I think it’s a fun project,” Modestine said. “We’re just excited to get it going and see how well it does.”

McGill has been spending time at the brewery and learning about the craft beer industry.

“We’re going to see how far that takes us because that opens up to a whole new audience — a whole new sector of the business,” McGill said. “The number of Black women in craft brewing is very low, so just to be able to be a leader and continue to make waves is exciting.”

McGill, a 38-year-old Temple University alumna, has been racking up the firsts since she started her business two years ago. She became one of the first vendors — and the only Black female vendor — at the Piazza Pod Park in Northern Liberties in June 2019. And she was the first paid vendor on the Black-owned and operated Black and Mobile food delivery service.

When large events were canceled earlier this year and McGill had to figure out how to sustain her business, she teamed up with Tamekah Bost, who owns The Better Box, and got her French Toast bites added to The Better Box’s dessert menu. McGill was also selected to become a member of the DoorDash Restaurant Advisory Council.

“The whole thing to this has been the partnerships,” she said. “They are definitely more valuable than money.”

McGill first applied to the Delaware River Waterfront Corp. (DRWC) for a vending slot in early February, but there weren’t any openings.

“Mid-COVID, I got a response back saying, ‘We don’t know the state of the city, so we’re not accepting anyone new,’” she said.

But then a vending space opened up in July, and staff at the DRWC wanted to fill it with a diverse vendor, said Almaz Crowe, DRWC spokeswoman.

“Some of us were like, ‘Let’s take an opportunity to look at businesses that are owned and operated by people of color — particularly Black women — and see how we can incorporate them into what is arguably one of Philadelphia’s most diverse attractions in terms of who comes to visit,’ because we get all kinds of people, so it just made sense that it all coincides this year,” Crowe said.

McGill is “a great role model for young Black entrepreneurs who are figuring out how to start their businesses [and] how to leverage partnerships,” Crowe said.

“So having her on Spruce Street Harbor Park as the first African-American women-owned business is a really big deal because she represents a segment of Philadelphia’s community that we don’t see enough of in a large-scale destination.”

For McGill, the opportunity to become a park vendor came right on time. Her traditional business model was built on vending at open-air marketplaces and large events throughout the region. So when city officials canceled all events and festivals through February 2021 due to COVID-19, McGill welcomed the chance to become a Spruce Street vendor.

A $3,000 forgivable loan from the Pennsylvania 30 Day Fund, which supports businesses impacted by the COVID-19 shutdowns, was instrumental in helping her move into the park. McGill used the funding to purchase commercial kitchen equipment and personal protective equipment for her staff.

“That was very instrumental in being able to move quickly into Spruce Street Harbor Park without going into any debt,” McGill said.

A fter a year of selling her signature French Toast Bites at concerts, festivals and open-air marketplaces, Charisse McGill has found a perman…

Some Black organizations are backing the Philadelphia 76ers’ bid to build a new basketball stadium near Penn’s Landing, banking on a billion d…