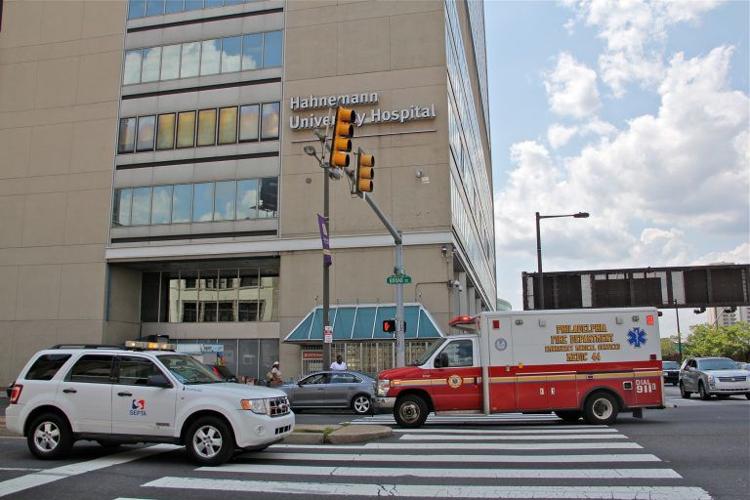 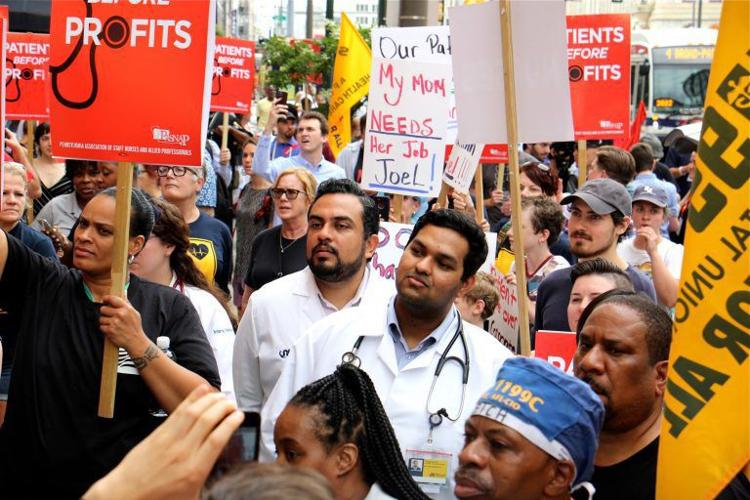 About 800 protesters demanded that Hahnemann remain open at a demonstration last month.

About 800 protesters demanded that Hahnemann remain open at a demonstration last month.

Philadelphia Academic Health System, the company that owns Hahnemann University Hospital, is in bankruptcy proceedings, but the hospital’s real estate is not included in the filing. That has sparked outrage from the nurses union, City Council, and even presidential hopeful Bernie Sanders. They say it shows the owner had a plan all along: let the hospital fail, and sell it for its valuable Center City location.

Indeed, California investment banker Joel Freedman, CEO of Philadelphia Academic Health System, separated out the land beneath the hospital and its adjacent, related buildings from the operating business itself, as is common in private equity purchases.

In fact, that’s how private equity is supposed to work: Big firms buy struggling companies with the promise of financial support, and to improve their operations and business strategy. When things go right, the business succeeds, and the private equity firm sells it in a public offering or to another bidder for more than it paid.

In other cases though, the process is not so successful. Private equity firms often load companies up with debt, take dividends out for themselves, sell off valuable real estate, and charge monitoring fees and interest on their loans, leaving a company in a much weaker position than it would have been otherwise, and often on the verge of bankruptcy.

“The house never loses,” said Eileen Applebaum, co-director at the Center for Economic and Policy Research. “The private equity firm makes money whether the company succeeds or it doesn’t.”

Freedman formed Philadelphia Academic Health System to run the hospital. His California private equity firm is called Paladin Healthcare, and he has previously bought and managed hospitals in California and Washington, D.C. At the end of June, Freedman announced that Hahnemann, the 496-bed hospital at the corner of Broad and Vine streets, would close. In early July, Philadelphia Academic Health filed a Chapter 11 bankruptcy petition.

Applebaum, who has taught economics at Temple University and is a native Philadelphian, said that if Paladin Healthcare had really wanted to save the hospital, there are a few things it should have tried.

The most obvious, she said, would have been to diversify its payer mix. One of the reasons Hahnemann failed financially is because two-thirds of its patients were on Medicaid or Medicare — publicly funded insurance plans that reimburse hospitals for care at lower rates than private insurance does. Applebaum said it’s common for hospitals in areas with high rates of patients on public insurance to buy up smaller hospitals in the suburbs, or in other areas that attract more patients on private insurance.

“You see Thomas Jefferson University outpatient-care centers everywhere, you see smaller suburban hospitals that are part of the Thomas Jefferson system,” she said. “Yes, you want to serve the less well-off communities, but you have to balance that with other communities. Everybody knows this, this is not a mystery.”

Because this strategy is common, the fact that Freedman didn’t try it makes Applebaum dubious that he really wanted to save Hahnemann.

“It does not really appear that they made a good-faith effort to turn this hospital around,” she said.

Freedman declined to comment for this story, but he has said in previous statements that he tried to sell the hospital to a nonprofit, and that he asked the city and state for money to keep it open.

The imbalanced payer mix is not as much of an issue at St. Christopher’s, the 188-bed children’s hospital in North Philadelphia that is also run by Philadelphia Academic Health System. It reported a $58 million pretax profit last year and is not closing.

That’s because almost all kids in the United States have insurance through Medicaid or CHIP, a federal program. Even though those reimbursement rates are also lower than private insurance would pay, children’s hospitals are more accustomed to that, and they adjust their operations accordingly.

“Pediatric hospitals, particularly those who serve a low-income population like St. Christopher’s, have learned how to operate on a Medicaid budget, so to speak, and have found ways to be more efficient and work within that coverage in a way that a lot of hospitals that primarily serve adult patients maybe haven’t had to,” said Lisa Bielamowicz, co-founder of Gist Healthcare, a D.C.-based health care consulting firm.

Last week, a judge in U.S. Bankruptcy Court in Wilmington gave the green light for hospital systems to bid on St. Christopher’s. A consortium of four health care systems has already expressed interest.

“There’s also an element of wanting to preserve the competitive dynamic and capacity for that care in the market by preserving St. Christopher’s, so that Philadelphia doesn’t become a one-horse town for specialty children’s care,” said Bielamowicz.

Losing St. Chris would leave only Children’s Hospital of Philadelphia for inpatient pediatric care. In 2018, two-thirds of the revenue at St. Christopher’s was from Medicaid. It was half that amount at CHOP.

Bielamowicz added that it would be in the best interest of the local systems to take on St. Chris, so vulnerable children didn’t end up in those hospitals’ regular emergency rooms, many of which are at capacity, without the proper resources to care for them.

St. Christopher’s will be auctioned off to the highest bidder, and the bankruptcy judge is expected to approve the sale in September. The hospital’s Erie Avenue site also was not included in the bankruptcy filing.

Hahnemann Hospital’s property — owned by Broad Street Healthcare, the holding company set up by Freedman — totals about 1 million square feet and, according to city records, has a market value of $58 million.

Brad Molotsky, a partner with the law firm Duane Morris who formerly worked as general counsel for Brandywine Realty Trust, said the downtown neighborhood shows promise for developers, but only ones with deep pockets.

“If you rebuilt a million square feet at 500 bucks a square foot, that’s a big ticket,” he said.

Applebaum, of the Center for Economic and Policy Research, said she is worried that a separate sale of the Hahnemann property to a developer will lay a road map for private equity firms around the country: Buy older hospital in areas that are gentrifying, separate the hospital from its real estate, let the hospitals go downhill, and then sell the real estate to the developers.

“It won’t matter that they lose money in the bankruptcy on the hospital, because they’re going to make so much money on the real estate,” she said.

Another Democratic presidential candidate, U.S. Sen. Elizabeth Warren, has released a plan that would force private equity firms and funds to share the responsibility for the debt the companies they buy take on in the financial restructuring process. As it stands now, neither Paladin Healthcare, the parent company, or MidCap Financial, which loaned purchase and operating funds to Philadelphia Academic Health System, are on the hook for any of its debt.

Rich investors may have let Hahnemann Hospital go bankrupt. Now, they could profit from the land

After weeks of protests from medical residents and fellows, the owner of Hahnemann University Hospital announced Wednesday that it will releas…

A union representing workers from Hahnemann University Hospital has a plan it says would keep the property a hospital, and prevent it from bei…