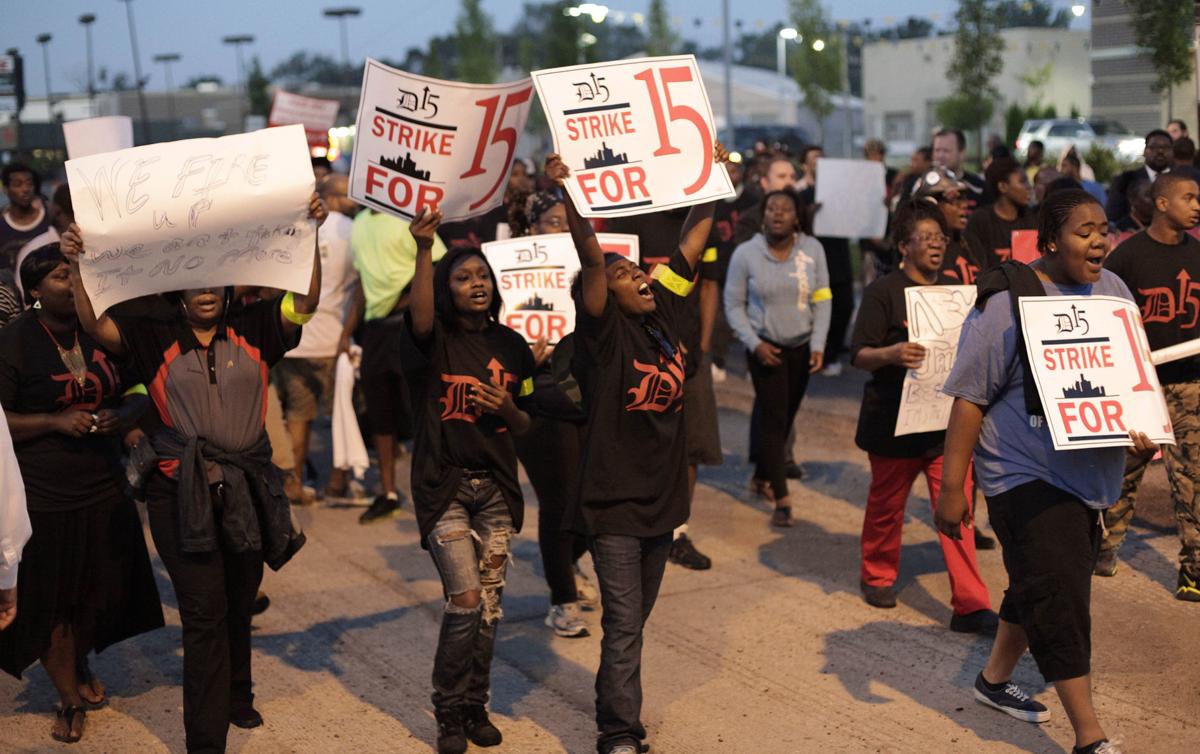 Workers at big corporations have been protesting for increases in low wages for years. In Detroit in 2014, protesters march on a McDonalds restaurant as part of a national protest to push fast-food chains to pay their employees at least $15 an hour. — AP Photo/Paul Sancya 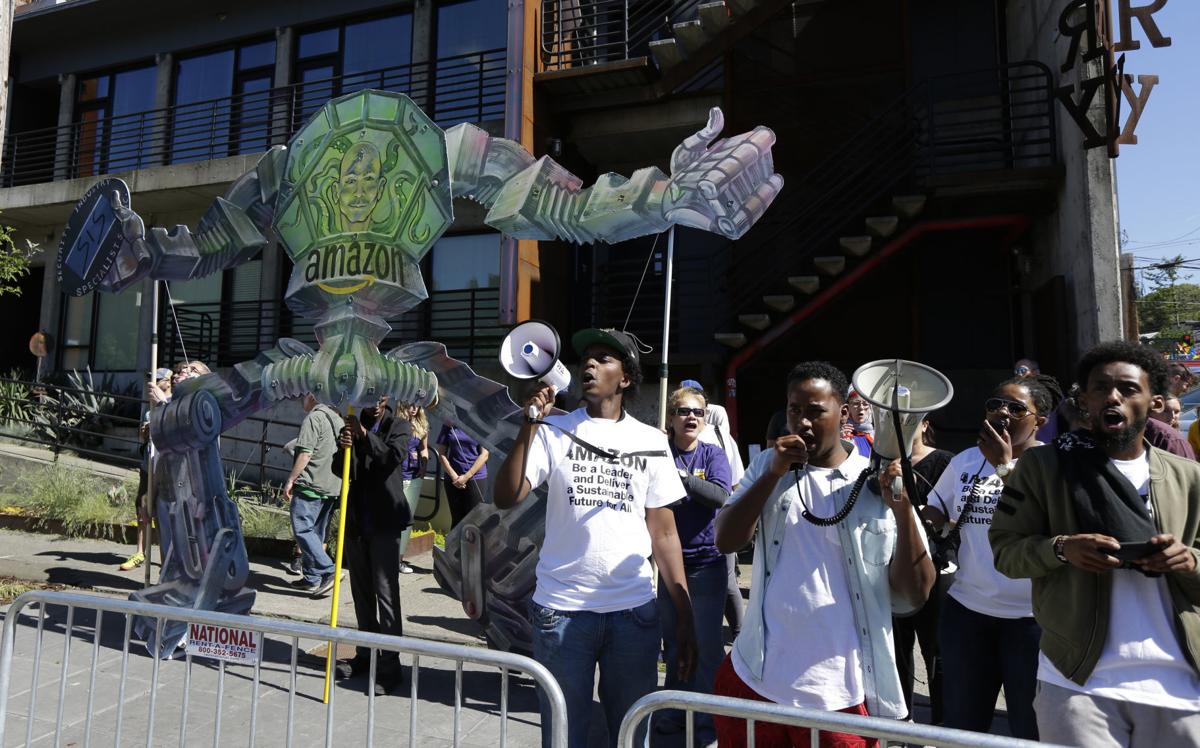 Protesters held a figure portraying Amazon.com founder Jeff Bezos as a large mechanized robot as they demonstrated outside Amazon’s annual meeting in 2017 in Seattle. Several months ago, the company announced it would set its base wage at $15 and support an increase in the federal minimum wage.

Workers at big corporations have been protesting for increases in low wages for years. In Detroit in 2014, protesters march on a McDonalds restaurant as part of a national protest to push fast-food chains to pay their employees at least $15 an hour. — AP Photo/Paul Sancya

Protesters held a figure portraying Amazon.com founder Jeff Bezos as a large mechanized robot as they demonstrated outside Amazon’s annual meeting in 2017 in Seattle. Several months ago, the company announced it would set its base wage at $15 and support an increase in the federal minimum wage.

Corporate America has been, shall we say, evolving on the minimum wage in recent years.

Last month, McDonalds — the most recognizable name in America’s lowest-paying industry — announced it would no longer lobby against minimum wage hikes. A few months before that, Amazon proclaimed that it would fully meet activists’ demands for a $15-per-hour baseline and that it would throw its considerable lobbying weight behind an increase in the federal floor. Then, just last week, Bank of America outdid them both, setting its own minimum at $20.

Who is left fighting the case against a higher minimum wage? American small businesses.

As a bill that would raise the minimum wage to $15 by 2024 nationwide awaits a vote on the House floor with 205 Democratic co-sponsors, life in the opposition is getting lonelier for the National Federation of Independent Business, the nation’s largest advocacy group for small companies.

“We’re playing defense on this one, to state the obvious,” said Jon Kurrle, vice president of federal government relations at the NFIB, which has about 300,000 members. “A larger company can absorb costs in a way that a smaller business can’t, and also make technology investments in a way that not all small businesses can.”

Although the wage premium for working at a large company has decreased over time, big businesses still achieve economies of scale through centralized human resources and benefits departments. They also have the upfront capital needed to invest in automation, such as the purchasing kiosks now in place at McDonalds, that will make businesses less subject to labor costs in the future.

Of course, plenty of small enterprises can sustain higher wages if they build those costs into their business model. But the shock of an initial wage hike can be too much for many. A study released in 2018 found that fast food restaurants were more likely to go out of business following a minimum wage hike — and new ones were more likely to start up, creating a negligible long-term change in employment but difficult experiences for many individual business owners.

Also, in recent years the minimum wage has been the least of big business’ labor problems. A tight job market has already propelled companies like Walmart and Target to announce several wage hikes, as well as better benefits, for their rank-and-file workers. So far, productivity has improved enough across the U.S. economy to sustain those cost increases without eating into profits. That said, a higher minimum wage could start to compress margins this year, Oxford Economics analyst Lydia Boussour predicted.

Congress hasn’t raised the federal minimum wage, which currently sits at $7.25 an hour, since 2009. More than half of registered voters support a hike to $15, according to a Hill-HarrisX poll released in January.

For large companies, opposing a hike comes along with bad publicity, which lately just doesn’t seem to be worth it for corporate America — especially for those with a consumer-facing brand reputation to maintain.

“A number of our members that have substantial retail operations are very concerned about image,” said Roger King, senior labor and employment counsel with the HR Policy Association, a trade group of large employers. “They’re very concerned about marketability of their product, and they don’t want to be a poster child for poor working conditions.”

And if a big business has to pay higher wages, it helps them if smaller competitors are forced to do the same. “You level the playing field,” King said.

That may have been part of the reason behind Amazon’s big move to $15 last fall. The company had already started to become a target of labor activists and politicians like Bernie Sanders, the Vermont senator who is running for president. That kind of criticism tarnished Amazon’s progressive tech-forward sheen at a time when it was also conducting a high-profile auction for its second headquarters.

Amazon has already reaped more concrete rewards from the investment in better pay, including a bumper crop of applicants for its jobs. Recent editions of the Federal Reserve’s Beige Book, an anecdotal economic survey published every few months, have contained several references to other businesses having trouble recruiting in the face of well-publicized wage hikes by large employers.

Last week, Amazon CEO Jeff Bezos flaunted the decision in his annual letter to shareholders. “Today I challenge our top retail competitors (you know who you are!) to match our employee benefits and our $15 minimum wage,” he wrote. “Do it! Better yet, go to $16 and throw the gauntlet back at us.”

Amazon has also made its presence felt on Capitol Hill, holding meetings with lawmakers in support of the Raise the Wage Act. It’s perhaps a prudent choice, since for the biggest and most profitable businesses, it’s becoming clear that $15 isn’t enough.

That’s what JPMorgan CEO Jamie Dimon learned at a congressional hearing with big bank chiefs last week, where freshman Rep. Katie Porter walked him through the finances of a hypothetical single mother making $16.50 an hour at one of his Chase branches in California. Every month, the worker would end up in the red, even as the bank recorded a profit of $9.18 billion for the quarter.

“I don’t know, I’d have to think about that,” Dimon replied.

Now, that doesn’t mean that all big businesses are pleased with the increasing likelihood of a higher minimum wage — especially franchisees of those big businesses, who might own a handful of storefronts. After McDonalds’ announcement, former McDonalds CEO Ed Rensi wrote in Forbes about how the company’s choice “aggravates” its franchisees, who formed their first-ever national association last fall in order to negotiate over issues like menu pricing with corporate headquarters.

The National Restaurant Association, one of the most powerful lobbying groups in Washington, remains officially opposed to the $15 minimum wage bill. Another, the U.S. Chamber of Commerce, declined to comment on the issue.

But national chains have more important issues to deal with at the moment. In particular, they’ve put most of their lobbying firepower into changing the rules around who qualifies as a “joint employer,” which threatens to make franchisors and general contractors legally liable for the labor violations of their franchisees and subcontractors, as well as open them up to union-organizing campaigns. After years of fighting the Obama administration, the business lobby has welcomed new rules proposed by the National Labor Relations Board and the Department of Labor Republican appointees that would mostly close off that possibility.

As local minimum wage legislation has cropped up around the country, franchisees have demanded that they be treated like small businesses, rather than large businesses that are sometimes required to raise their wages on an accelerated timeline. They’re now pushing Congress to pre-empt such differential treatment in the future. — (CNN)

“We know where the conversation is going, we also know where the economy is going,” said Matt Haller, senior vice president for government relations and public affairs at the International Franchise Association. “I would say our position has shifted more toward making sure that businesses are treated equally.”

A nationwide $15 minimum wage is still far from inevitable, however. Democratic House leadership has yet to set a firm timeline for voting on the bill, which would still face a tough fight in the Senate. A sizable band of moderate Democrats has backed an alternative measure that would adjust the federal minimum to fit the cost of living in different parts of the country and set cheaper places on a slower course upward. While employers in high-cost cities like New York would have to pay $15 by 2024 — even though under New York state law, employers already have to pay that now — places like Tuscaloosa, Alabama wouldn’t get there until 2033.

And despite the public pronouncements of a few public-facing businesses, as well as mounting evidence showing that higher minimum wages have little effect on employment, the idea that they’re bad for business is hard to shake.

“$15 is not far left. It’s not radical. It’s not excessive. It’s the bare minimum of what an individual in the lowest cost-of-living parts of this country is going to need in 2024,” said Judy Conti, director of government affairs for the left-leaning National Employment Law Project. “Part of the problem is that the Chamber and the NFIB and the National Restaurant Association have screamed for so hard and so long about the fictitious job loss that comes from the minimum wage that people continue to believe it.” — (CNN)