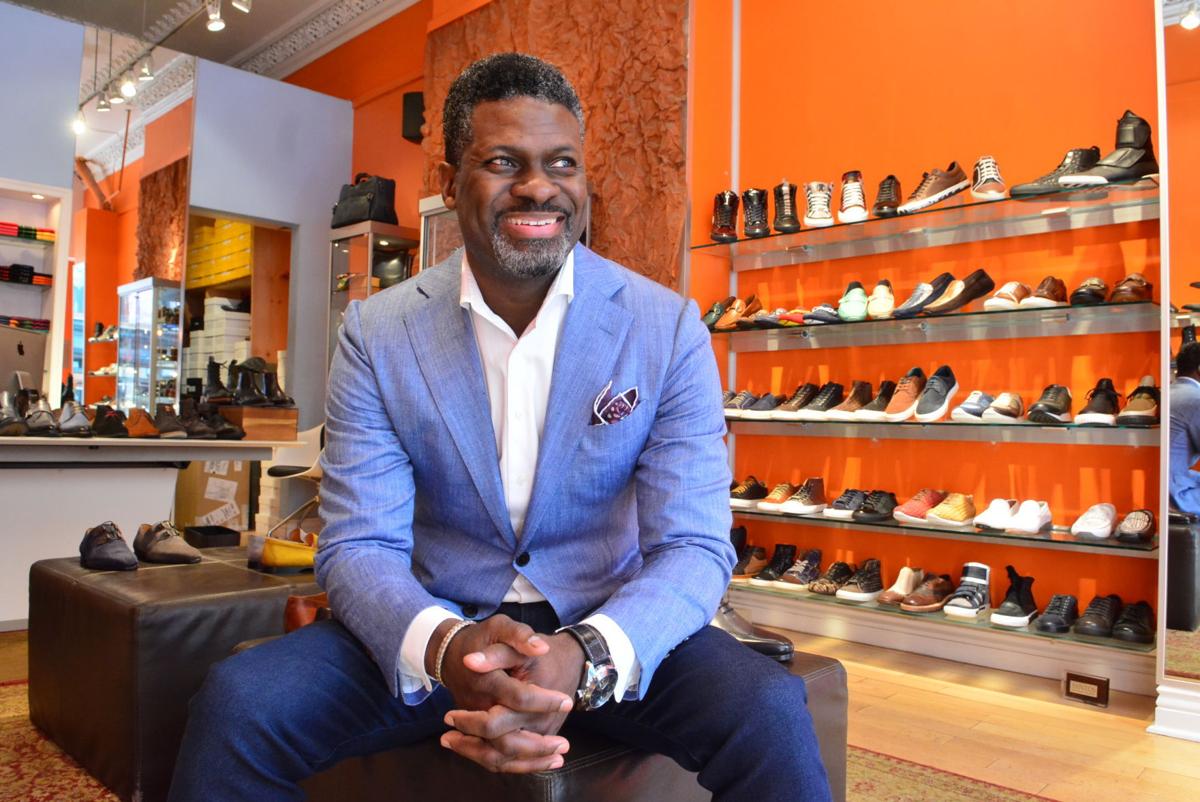 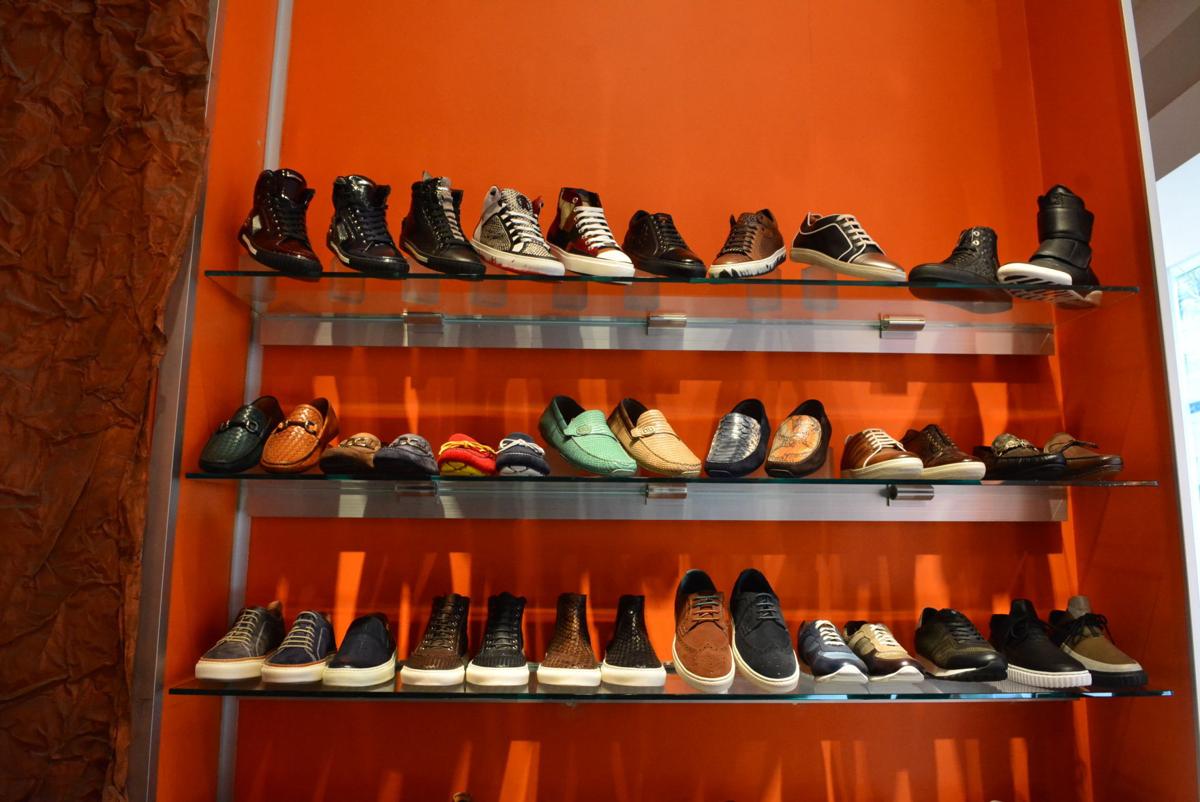 “I’ve always loved shoes - the designs, the details and workmanship, and the reaction that customers have when they put on a new pair of shoes,” said Steve Jamison. 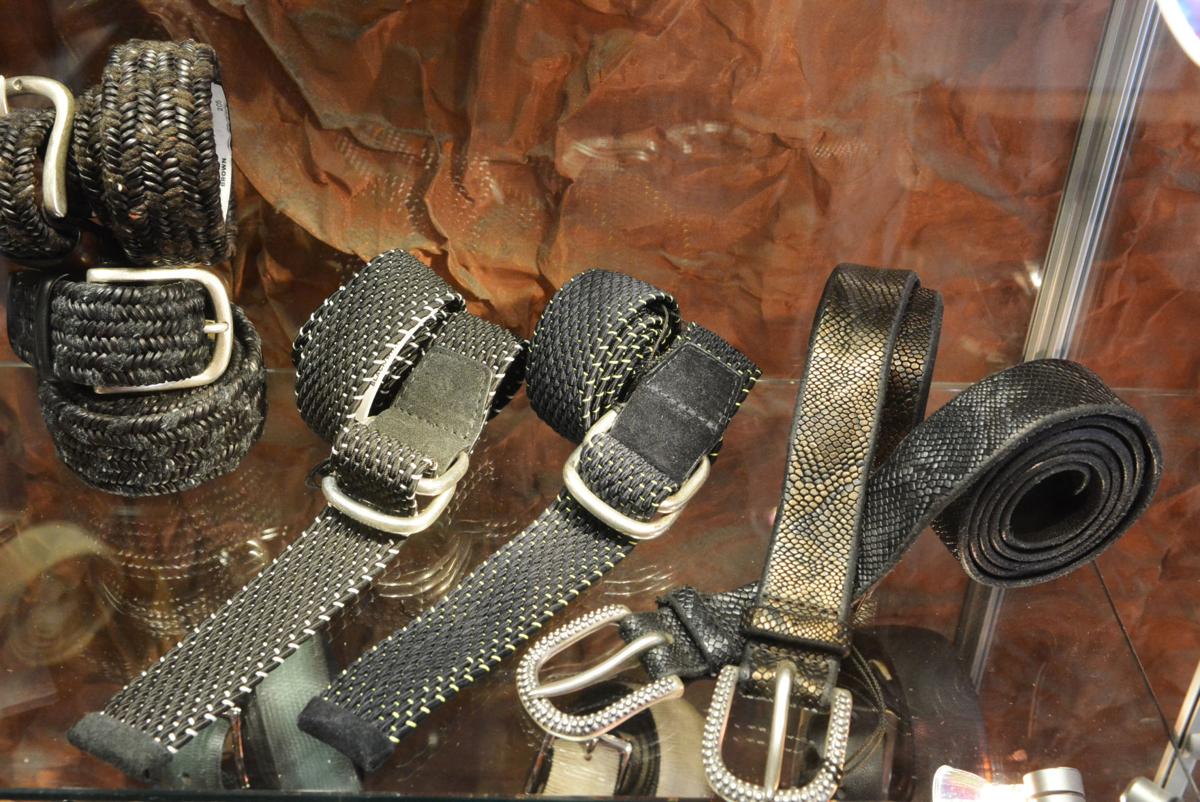 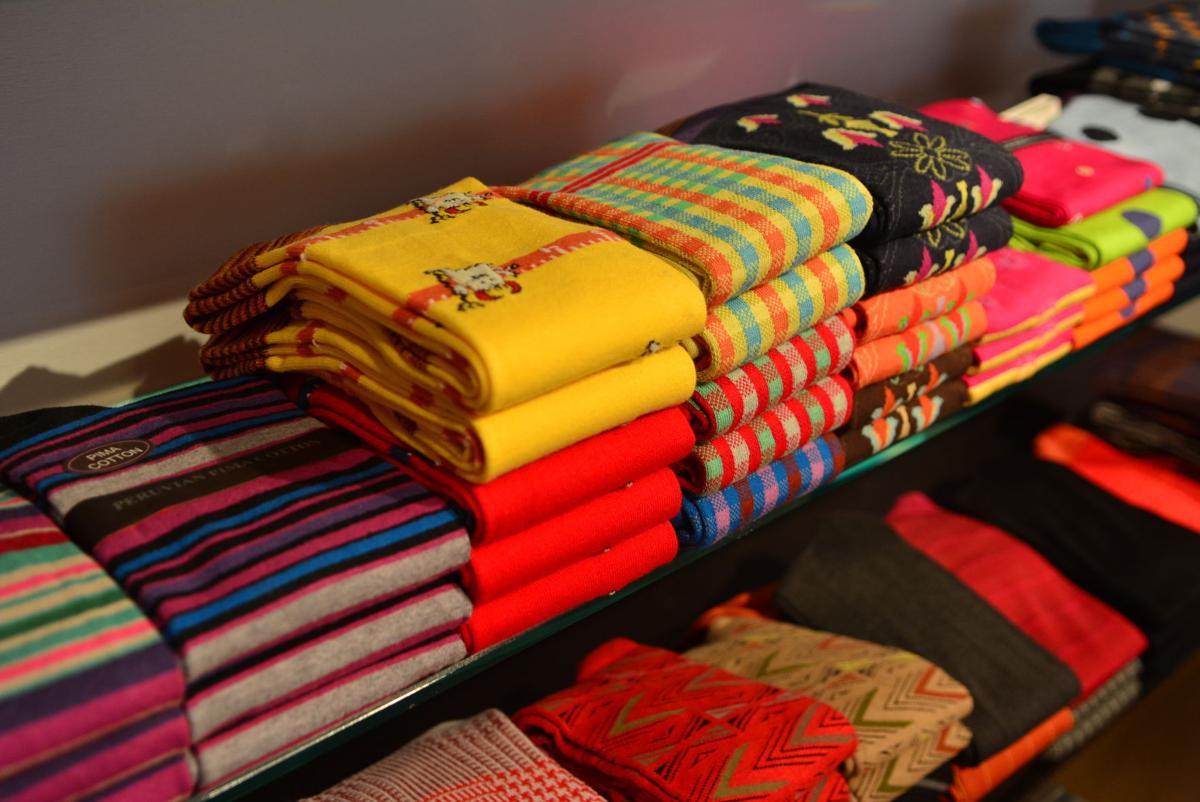 Brightly colored socks are on display. 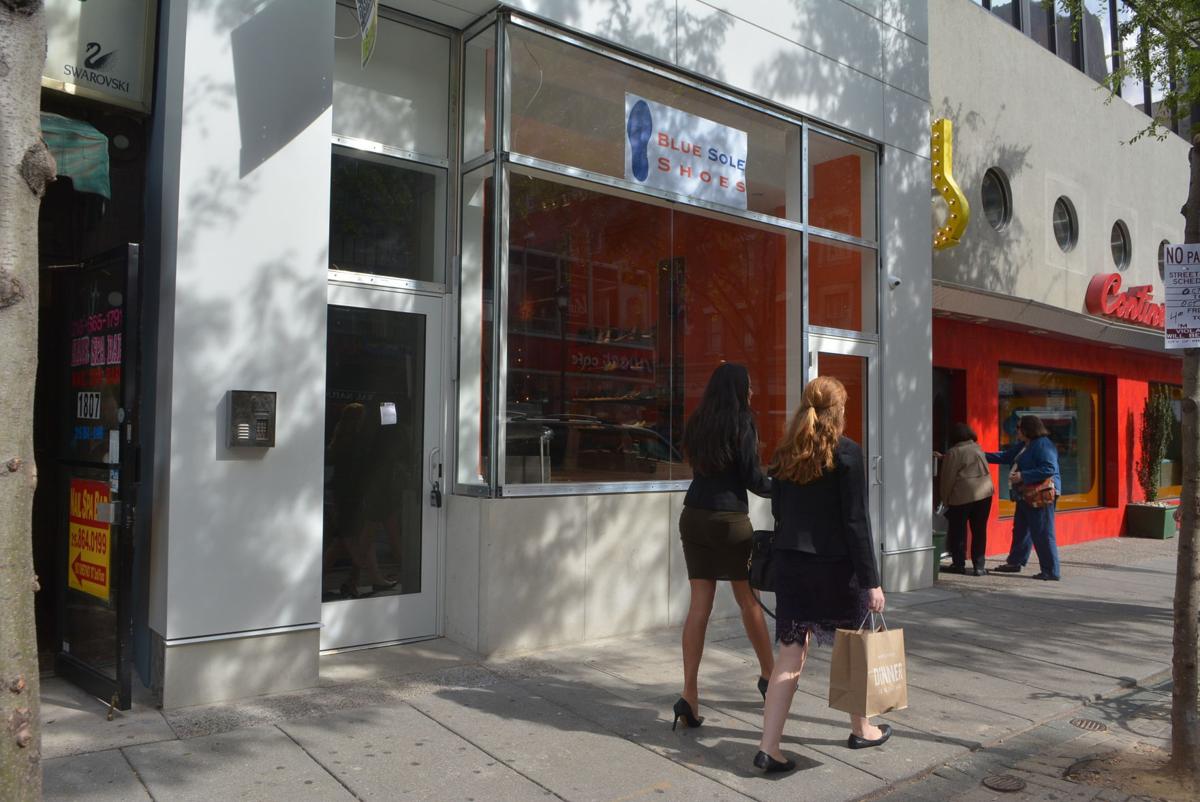 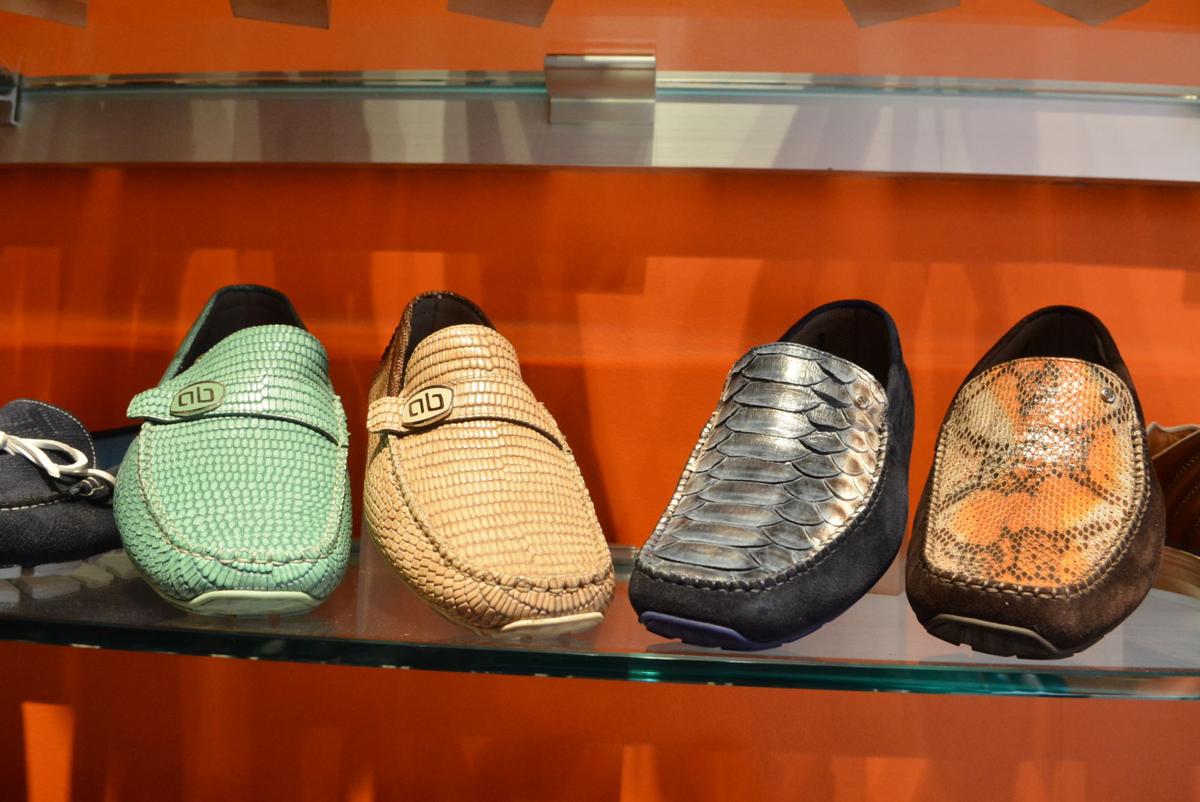 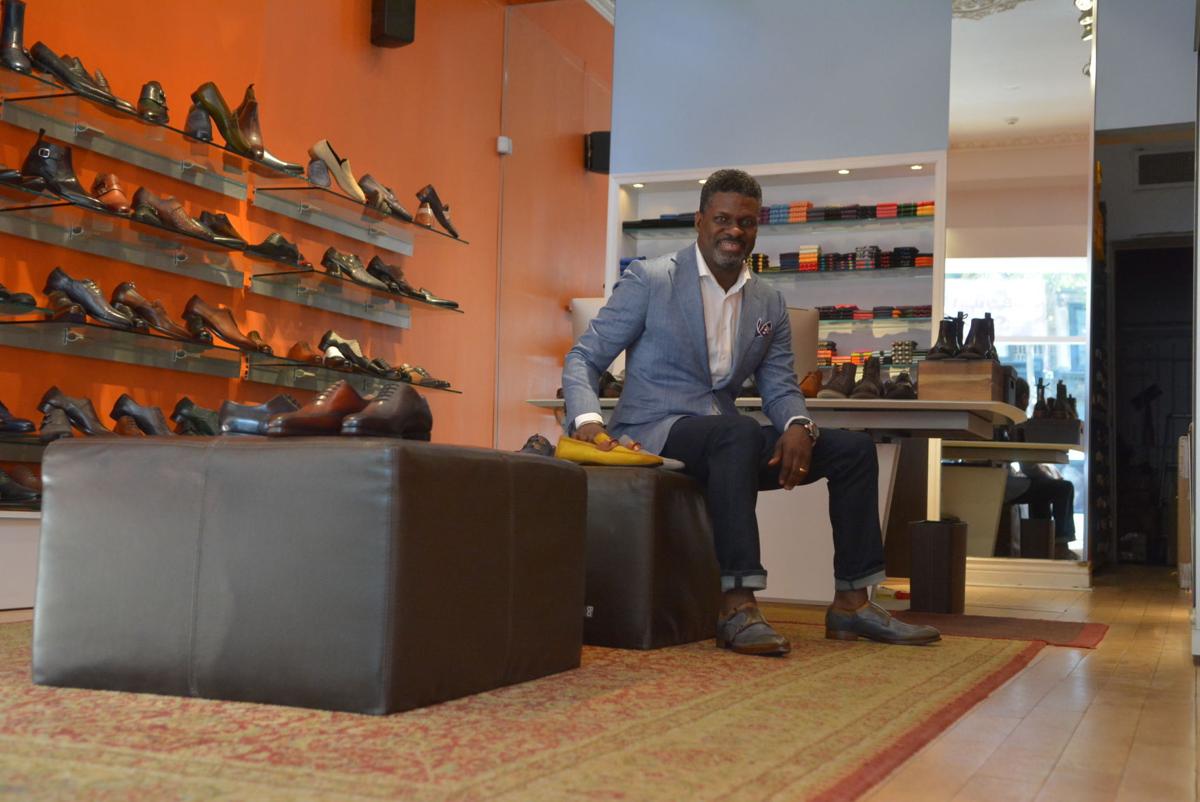 “I view my store not just as a destination for the style-conscious consumer to buy exclusive footwear, but as a place of inspiration for my customers, my staff and for any future entrepreneurs that I have the opportunity to touch,” said Steve Jamison.

“I’ve always loved shoes - the designs, the details and workmanship, and the reaction that customers have when they put on a new pair of shoes,” said Steve Jamison.

Brightly colored socks are on display.

“I view my store not just as a destination for the style-conscious consumer to buy exclusive footwear, but as a place of inspiration for my customers, my staff and for any future entrepreneurs that I have the opportunity to touch,” said Steve Jamison.

As the owner of the Center City’s destination men’s shoe store, Steve Jamison could easily marvel about the path he took before opening Blue Sole Shoes. The North Philly native recalled a childhood eating government-issued cheese and patching up holes in the bottom of his sneakers.

“As a kid, I remember seeing gang fights and being hungry a lot of the time,” Jamison said. “Often times I’d open the fridge and find nothing but a pitcher of Kool-Aid. But, we learned to be resourceful by making mayonnaise sandwiches and syrup sandwiches. We did what we had to do to get by.”

To become a successful minority business owner, Jamison had to combine hard work and tenacity along with risk and luck.

“It only took 33 years,” he joked in recalling how it all started. He was first bit by the shoe fashion bug as a boy when given a pair of stylish pair of designer shoes. “My mom gave me my first pair of fashion shoes, a brown pair of Pierre Cardin. I put them on and I noticed the reaction I got from people. People just loved them and talked so much about them and how I looked good in them. I think it was the initial reaction that caused the attraction for me. Outside of that, it is just fashion in general that I love. I think it is amazing, really, how people look so different and feel so different about themselves when they put the right kind of clothing on, and of course that includes shoes.”

Jamison first started in retail at the age of 17, working part time at a sneaker store after school. “I literally fell in love with helping people immediately, and I still love it today,” he said.

According to his press release, after attending the University of Pittsburgh in 1989, Jamison had planned to become a bilingual criminal defense attorney in Miami, but instead he ended up jumping right back into retail and never looking back. He worked for the notable Philadelphia clothier Wayne Edwards/Strega and then prominent Philly shoe retailer Bottino, where he held a number of responsibilities and job titles, including sales associate, assistant buyer and assistant manager.

“I’ve always loved shoes — the designs, the details and workmanship, and the reaction that customers have when they put on a new pair of shoes,” said Jamison. “I achieve a serious high when I witness how they feel and how it transforms their mood and their style on the spot. It’s an extraordinary phenomenon.”

In February 2007, after finally saving enough money to open his own shop, Jamison took a huge gamble and opened Blue Sole Shoes at 1805 Chestnut St. He financed his venture with credit cards and a $120,000 home equity loan, risking everything to open the store.

“I knew that if the store failed I would lose my house, and maybe everything I’ve worked for all my life,” recalled Jamison. “My wife was very supportive, though, and she knew going into it that we were risking everything, but she also had a great appreciation for what we were doing and the utmost trust in me. I couldn’t have asked for anything more from her. Her support greatly helped me get where I am today.”

Nine years later, Jamison has made his wildest dreams come true, and has become one of the world’s premier purveyors of luxury Italian and European footwear. Jamison’s expertise in men’s footwear earned him the MICAM Award for “Best Italian Foreign Buyer” in 2015. The prestigious international business prize, from the Milan-based footwear forum, is “awarded by MICAM exhibitors to buyers who demonstrate the greatest appreciation for the excellence of Italian-made footwear, and their work in promoting it worldwide.”

Today, the father of a 15-year-old daughter strives to be a role model for others: for a younger generation of African Americans who dare to dream big and run their own businesses.

“They have to understand that you don’t have to settle, but you do have to put in the serious time and hard work it takes to gain the insight and instincts it takes to run your own business,” said Jamison.

“I also know for a fact that there isn’t a great representation of African Americans in my field, and for me, it’s important for me to step up and champion that cause,” he added. “I view my store not just as a destination for the style-conscious consumer to buy exclusive footwear, but as a place of inspiration for my customers, my staff and for any future entrepreneurs that I have the opportunity to touch.”