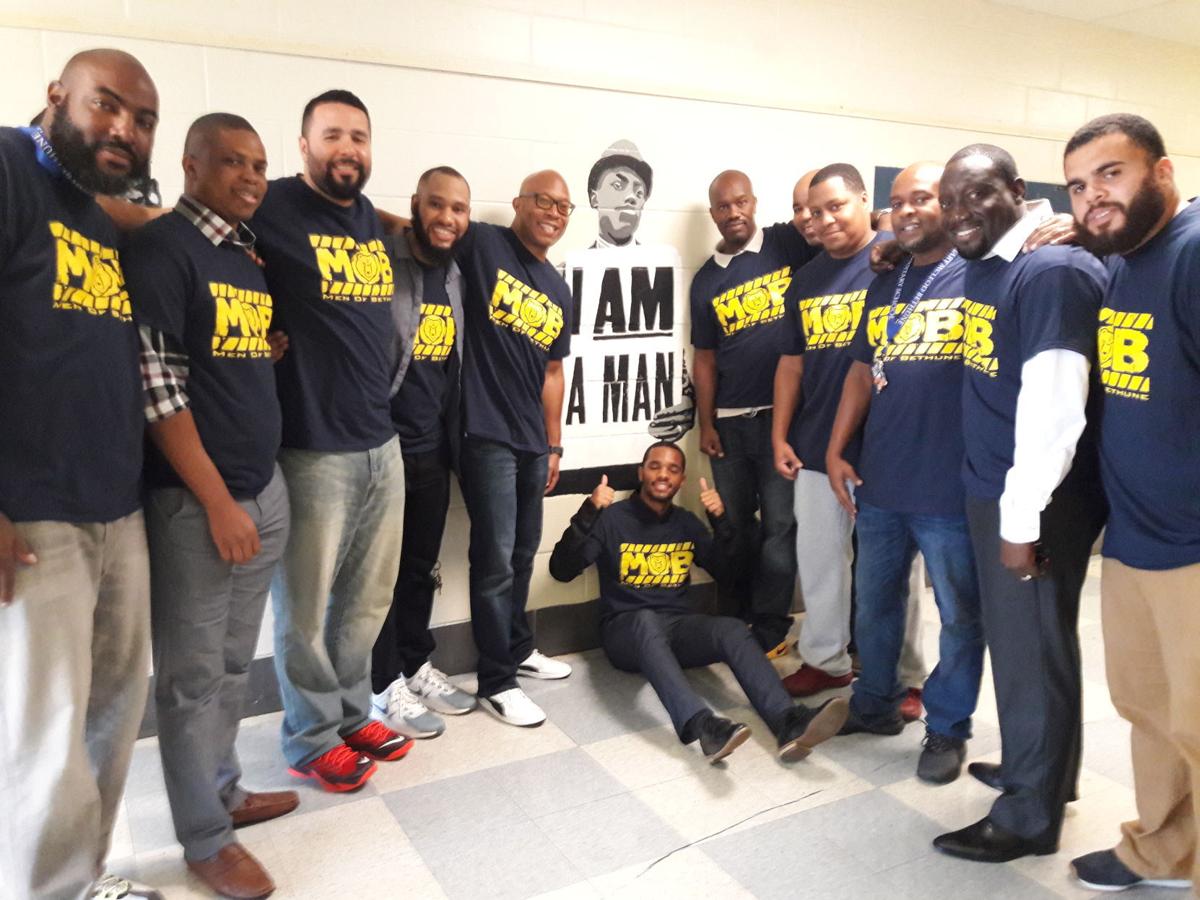 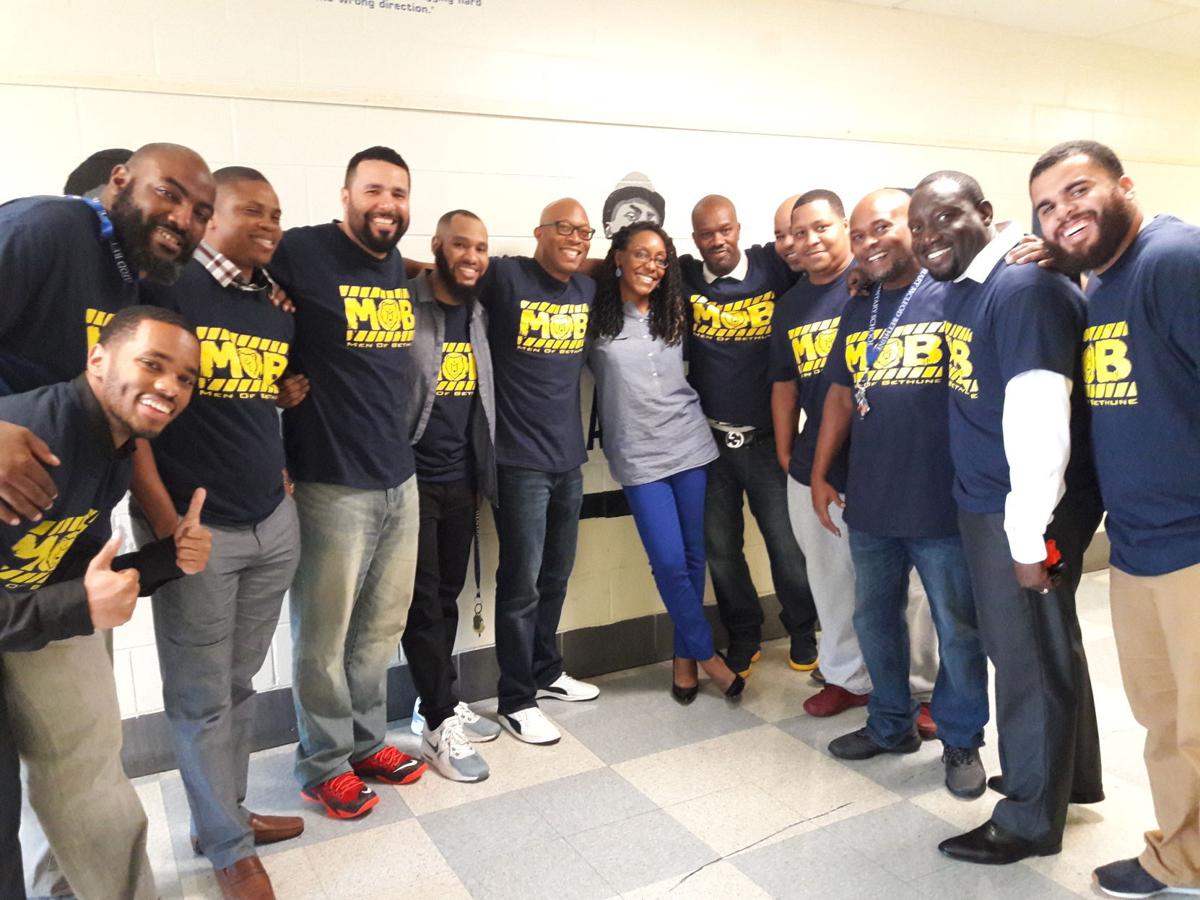 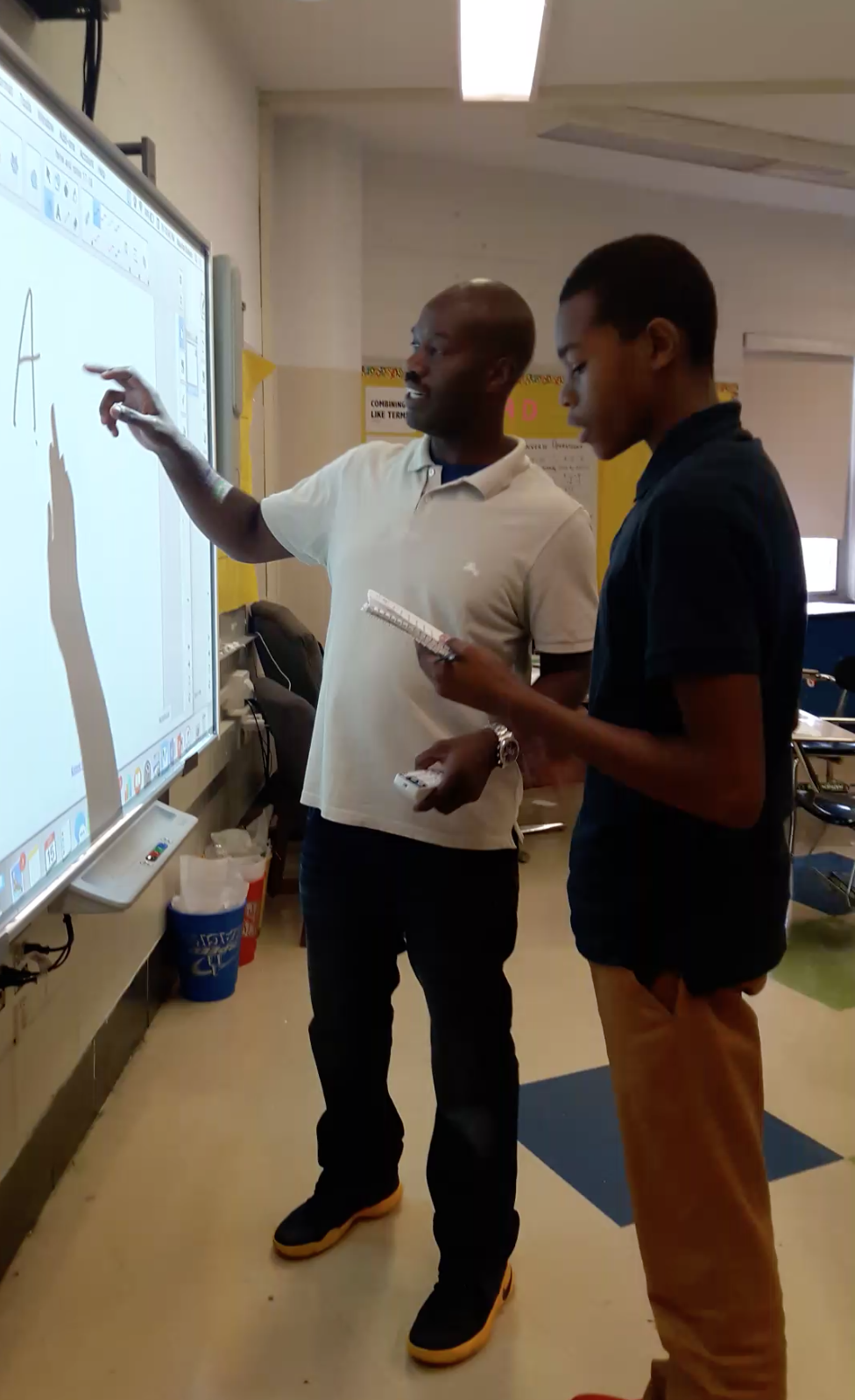 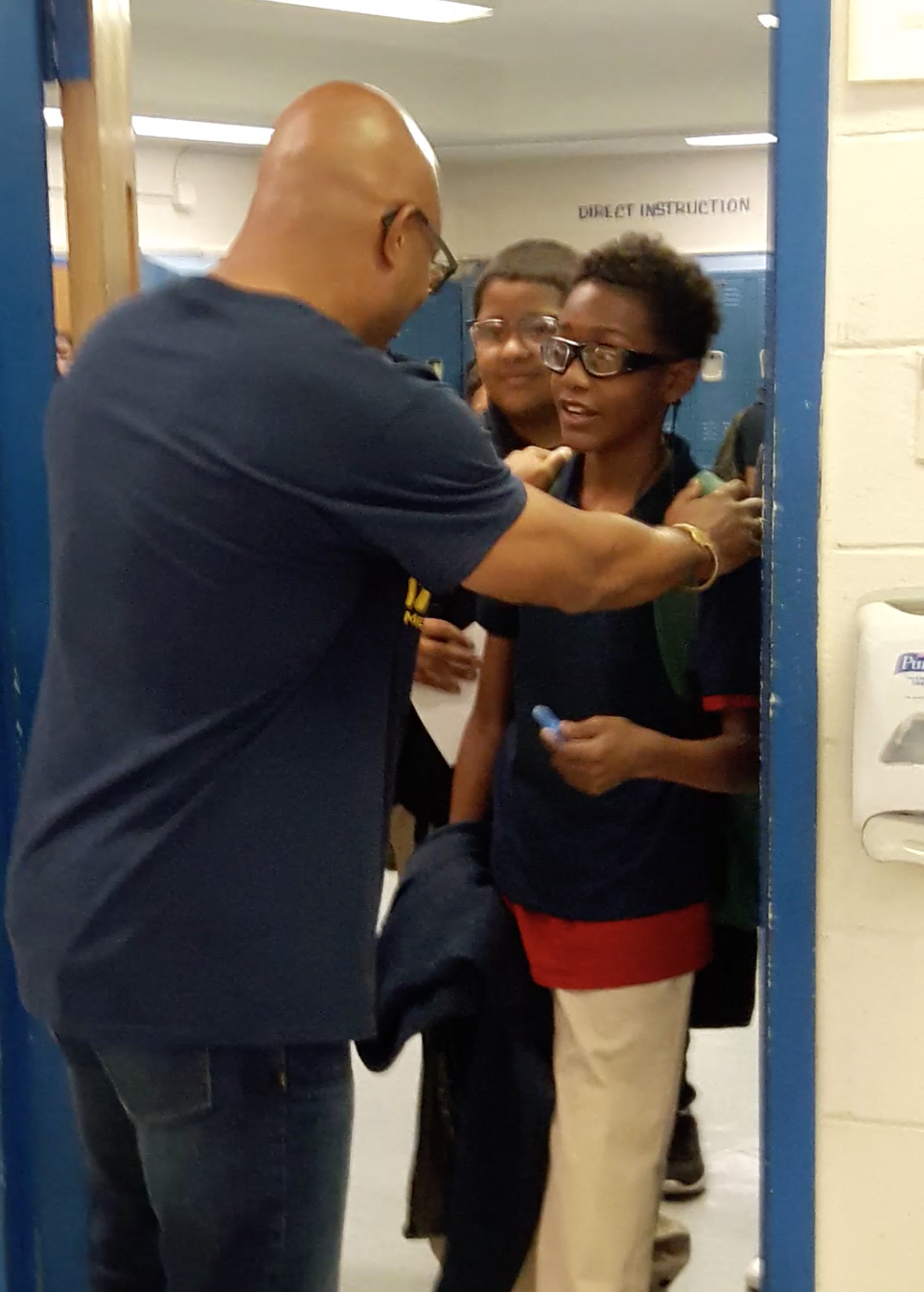 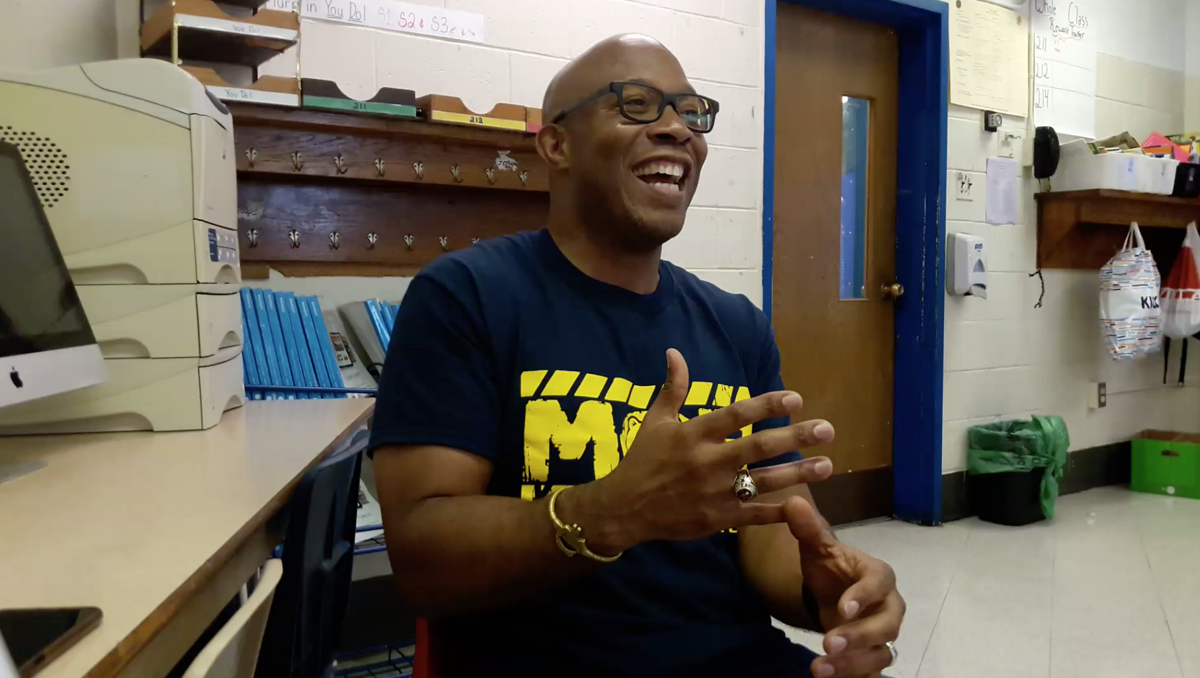 Literacy teacher Herman Douglas discusses how he feels about his students. 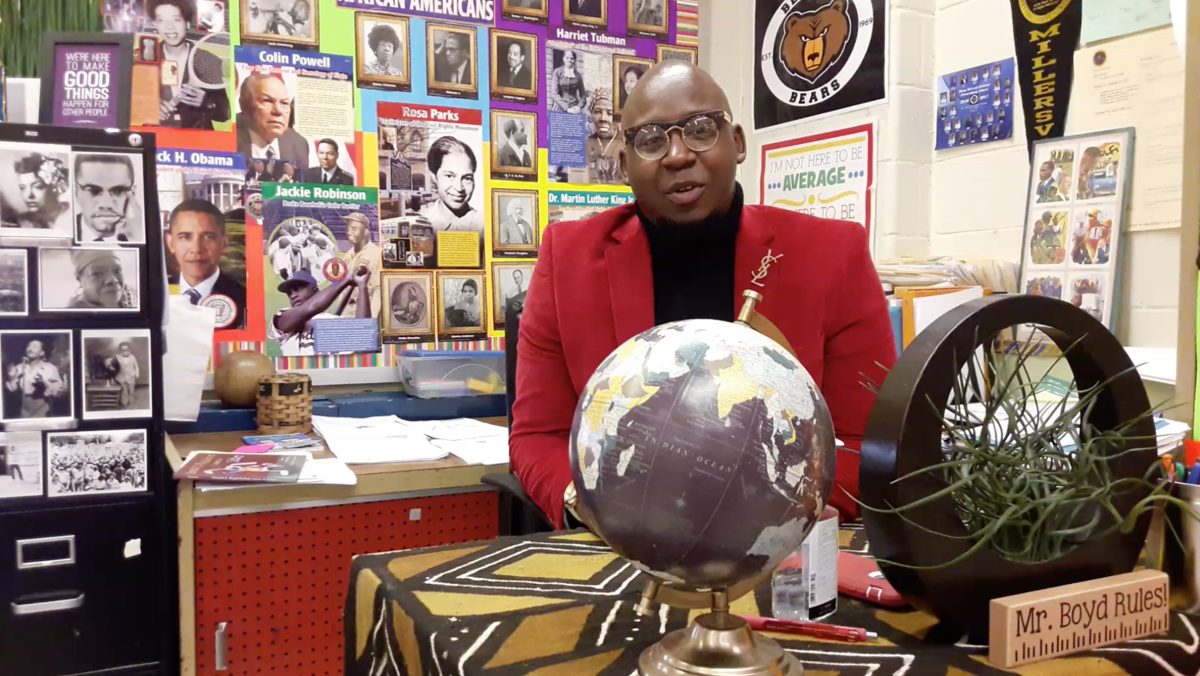 Literacy teacher Herman Douglas discusses how he feels about his students.

Eighty percent of Bethune’s 700 plus students are Black. And the 13 Black male educators including classroom teachers, a dean and an intervention specialist, make up 31 percent of its staff. That is nearly 10 times the School District of Philadelphia’s 2016-2017 average of four percent and more than 10 times the national average of two percent as reported by the U.S. Department of Education.

“Last year, we made a conscious effort to increase the number of Black male educators in our building. We didn’t shy away from other qualified candidates but we were focused in our recruitment efforts to find qualified Black Male Educators who believe in the vision that we have for our school,” said Bethune principal Jamina Dingle. “I’ve always felt that it just makes sense for the teaching staff of a school to be reflective of the students that are being taught.

”hen I arrived at Bethune in 2014, that wasn’t the case. Far from it in fact. So as teachers moved or retired, our recruitment efforts were focused on changing that.”

Middle school English Language Arts teacher Herman Douglas has taught at Bethune for nine years and in this time, he said the current school term is the one in which the school has seen the most black male educators. When he began teaching, it was he and two others — one of whom was a teacher’s aide.

Dingle said when she became the principal in 2014, Bethune had four black male educators out of a staff of 41 and “was already above the national average with 10 percent.

We’ve added gradually,” she said. “We had the biggest increase this year.”

Dingle’s vision has translated into different experiences for students, depending on whose classroom you visit.

When students enter Douglas’ classes, he greets them with a prompt at the door, “You’re great?” he asks. To which they respond, “I’m great.” Then, during class, he addresses the boys as, “king,” and the girls as “queen,” titles reminiscent of African royalty.

“When I look at my children, I see that they’re diamonds, like acres of diamonds, and I want them to shine in everything they do,” he said. “So, I let them know the world is not fair and don’t think of it as a fair place. But to know, you have to navigate through the unfairness by being 10 times better. That’s the only way our children will be able to knock open those doors of opportunity.”

Douglas added that he admires his students because despite their family’s income, having parents incarcerated, or living in foster care, they still put in the effort.

“I love the grit of our students. They come from loving families but they are challenged. But they still come and give me their all,” he said. “I drive around and see prostitutes every day on Old York Rd. I see beer stores open at seven and eight in the morning. I’ve seen parents run over, killed. They are great kids and despite what comes in their way, they still come here every day and rise up.”

One of Douglas’ students, Kimani Scott, 12, a seventh grader, said this school term marks the first she’s ever had a Black male teacher. She started at Bethune in kindergarten, left in the second grade and came back for the third grade.

“This is the first time…” she said. “They care about what’s going on in my life. That makes us feel like we are appreciated more.” Scott added that the difference she’s observed with her black male teachers, especially in Douglas’ class, is a firm approach to discipline.

“I say some things, talk back sometimes. I’ve been doing it since fifth grade. [My] white [teachers] would say, ‘K, just calm down.’ [Douglas] won’t give us chances. There are consequences to our actions.”

Maintaining high expectations was cited by Dingle as a Bethune best practice and was observed by several teachers as key in reaching their students.

“It definitely helps if you’re the ethnicity of the population you serve,” said middle grades math teacher Maurice Graham. “[And] students tend to respond to the bar you set. If you come in thinking kids are going to do what they want to do, not going to learn, they will achieve at that point. But set the bar high, they will rise to the occasion.”

Mercedes Long, an eighth grader who had her first Black male teacher in the sixth grade, said she and Graham were not on good terms in 2016, but that as of this school year, their relationship has improved.

“Last year, we didn’t get along and I didn’t learn a lot. I hung out with people and talked a lot and I argued back and forth with Mr. Graham,” she said. “Now, I’m actually learning a lot. [Math] is not that hard. Mr. Graham is one of the first teachers I had besides Mr. Pittman to go over something over and over again.”

Long added that the teachers were also there for her when she was having personal problems.

“Mr. Graham helped me this year and I had issues with my father in sixth and seventh grade — and Mr. Pittman talked to me about it.”

Dingle said student and teacher relationships is the main area she has seen improvement, as the number of black male educators has increased.

“Seeing a reflection of themselves tell them that they are loved, and that they are great, and refer to them as kings and queens has boosted the students impression of themselves and directly aligns with our growth mindset work,” she said. “We’ve also seen a positive impact in the students engagement in the instructional program. For example, I have students who are requesting to be in Mr. Diaz’s classroom. He has a firm, loving, no nonsense learning environment where every moment is a valuable instructional moment, and our students want to be in there.”

Jonathan Diaz, a native of Puerto Rico, is a sixth grade literacy and Social Studies teacher who said he has seen similar issues that Bethune’s students, 20 percent of whom are “Hispanic or Latino,” have experienced.

“I grew up in similar circumstances. I had to learn English. I went to neighborhood schools. I know the challenges kids face, because I’ve faced those challenges.”

Armani Brown, a seventh grader who has never had a Black male teacher until this year, said he feels they can understand what he and his peers’ lives are like.

“[They] have been through the same stuff I have — living in the hood. It’s a lot of killings,” said Brown. “If [we’re] having any troubles in the home, they will talk to us about it.”

Fourth grader Jahmir Lavery shared a similar view. A student in Quamir Trice’s class, he said the teacher has made him feel that even though he has had difficulties in school, he can still succeed.

“I was similar to him. We never really respected our teacher. [And] we weren’t eager to learn. We were just playing around and wouldn’t listen,” said Lavery, comparing himself to Trice. “I don’t do that [now]. [Trice] told us his life story. After he told us his life story, I started being good.”

Lavery said Trice has advised him to “never go through the paths he went through.”

Trice relates to challenging students. He was raised by a single mother after his father was handed a life sentence in prison, witnessed the death of a younger brother, removed from his mother’s home by the Department of Human Services, and was expelled from a school, all before the 10th grade. In his sophomore year of high school, he ended up in a youth detention center for 15 months.

“I don’t believe the stereotypes put on students. If in third grade they can’t perform like other students on the PSSA (state standardized test) that doesn’t mean [they’re] going to jail. That means you need more support,” said Trice. “In third grade, I didn’t do well on the PSSA. I was a strong student but I remember not being focused, not being in tune with my education, not being excited about learning.”

Trice’s classroom is decorated with, among other things, messages quoting positive Meek Mill lyrics — ‘Dream Chasers,’ “Litty,’ and a poster that charges, “Educate Not Incarcerate,” which speaks directly to the plight of some of the students and their community.

One of the assignments his class completed at the end of the fall semester was writing a letter to Mill, work that required students to practice language skills, but also reached them on a personal level.

“I want them totally involved with the process — to see education is fun, to understand education is their ticket out, that you must know how to do the basics,” Trice said.

A visit to fourth grade teacher Deighton Boyd’s classroom is a visual journey into Black history and African aesthetics and culture.

Flags of African countries hang from the ceilings. Kente cloth decorates the walls; African mud cloth covers Boyd’s desk and images of Black and Hispanic freedom fighters are pasted on the wall — reflecting students back to themselves. Little to no bare space exists in Boyd’s classroom — most of every inch is used to spark some imagination.

“I too grew up in an urban community and was exposed to blight and different situations that transpire in an urban setting,” said Boyd. “I believe the relationships are different because I am able to plug in cultural standards in my classroom. I touch upon not only African-American history, but Hispanic heritage.”

Students described a range of emotions that they feel learning in Boyd’s classroom — “fun,” “happy,” and able to defy gravity.

“Mr. Boyd’s classroom feels like he spent a lot of money on [it]. It has everything we need to succeed,” said Lawrence Coleman Jr. “When I walk in, it feels like a big butterfly in my tummy. It feels like I could fly.”