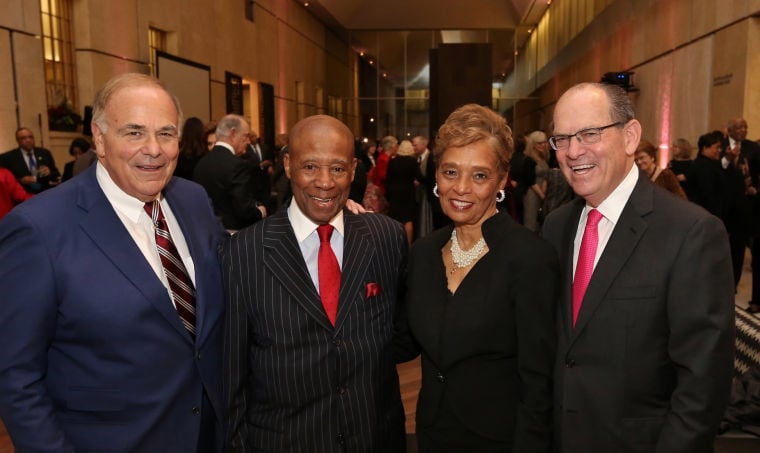 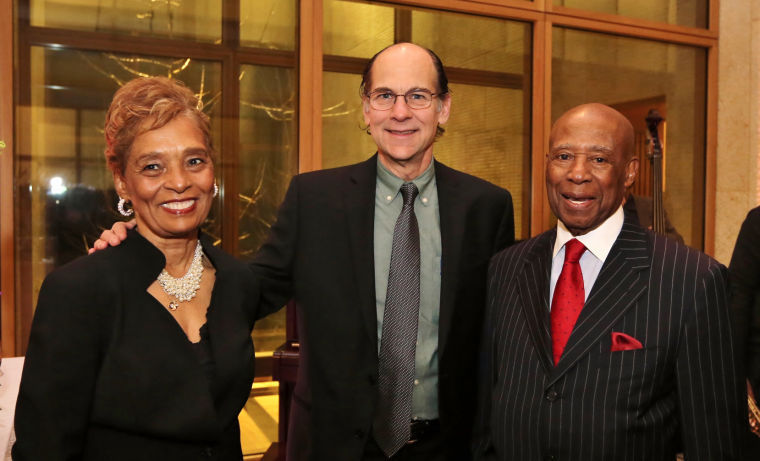 Lois Watson, David Haas and Bernard Watson attend an event held at the Barnes Foundation to mark Watson’s 15 years of service to the Barnes. — PHOTO BY DARRYL MORAN FOR THE BARNES FOUNDATION

Lois Watson, David Haas and Bernard Watson attend an event held at the Barnes Foundation to mark Watson’s 15 years of service to the Barnes. — PHOTO BY DARRYL MORAN FOR THE BARNES FOUNDATION

When Bernard C. Watson was elected chairman of the Barnes Foundation in 1999, the arts organization was bankrupt and needed to head in a new direction.

Under his leadership, the organization has made significant strides, including expanding its board, moving its collection to Center City and growing its endowment.

Watson has officially retired from the Barnes after a 15-year tenure. He’s proud of the strides made by the Barnes and the diverse leadership that is propelling the organization forward. The organization has worked with various foundations and philanthropists to get on firm financial footing.

“I feel good because the passion that I had about diversity in everything came through in this endeavor. Diversity gives us the kind of impact that we need to have.”

The Barnes Foundation was established by Albert C. Barnes in 1922 to “promote the advancement of education and the appreciation of the fine arts and horticulture.” Located at 2025 Benjamin Franklin Parkway, the Barnes houses the world’s largest collection of impressionist, post-impressionist and early modern art. The value of the collection has been placed in the tens of billions of dollars.

Barnes also valued African art and displayed it prominently with his European collection. Some reports indicate Barnes had disputes with Philadelphia aristocrats and did not want his collection to fall into their hands.

Today, seven seats of the Barnes’ 15-member board are held by women and minorities.

“There is no other major arts organization in this country that has that kind of diversity on its board,” Watson said.

About 150 business, community and political leaders turned out for a dinner on Tuesday evening to honor Watson for his 15 years of service to the Barnes Foundation.

Watson said many worked together to ensure the collection could be moved to Philadelphia.

“We had one thing in mind and that was to place this magnificent collection in a setting that was within keeping with Dr. Barnes’ view of how it ought to be presented and to make it available to the thousands of people who never had an opportunity to see it in its other location,” Watson said in a video shown during the tribute dinner. “We learned that if we worked together that we could screen out all of the static, all the distractions, all the diversions and get things done.”

During the event, Barnes board secretary Judge Jacqueline Allen reflected on Watson’s impact on the organization.

“Suffice it to say, the waters have not always been as calm as they are today. However, with Bernie at the helm, we were always secure in the knowledge that he could and would steer the ship to a safe and secure port. Bernie has done that at the Barnes Foundation,” Allen said.

“It is not an understatement to say that Bernard Watson has been a consummate contributor to every endeavor he’s pursued and has left every institution he has touched better off than when he arrived.”

“I think his legacy beyond the building itself is making the collection much more accessible to the citizens of Philadelphia and the citizens of the world. This location provides us visibility to so many more people than we had in Lower Merion,” Zminda said.

“I think it’s really more than the physical structure. It’s about the organizational structure that he helped to build. We’ve tripled our staff, we’ve grown our endowment to $50 million — all of these things happened on his watch. We’ve opened this building with no debt. We’ve welcomed almost 700,000 visitors in two-and-a-half years.”

During his tribute, Barnes board member Stephen Harmelin issued a mandate to those who gathered on Tuesday evening in Watson’s honor.

“Maintain your integrity, maintain your independence, maintain the reputation of this institution, maintain the vision that will permit us to fulfill the mission of the Barnes Foundation,” Harmelin said. “Above all, maintain each and every one of those in the name of the man who set the standard for all of us and whose absence will be perceived and profound.”

While leading the Barnes during a time of peril was no easy feat, Watson was up for the challenge.

He was born in Gary, Ind., and grew up during the Great Depression and World War II.

“Those are the two things that shaped my life — to let you know you can handle adversity. You have to keep fighting and don’t let anybody stand in your way,” said Watson, who obtained his Ph.D. from the University of Chicago.

His outlook on life was also shaped by the positive messages he received during his youth.

“My parents and my teachers at an all-Black high school in Gary, Ind., told us you could do anything anybody else could do. You just have to be twice as good because you’re not going to have the opportunities that others are but don’t let anybody stand in your way, and that’s exactly what I did,” he said.

Watson’s mark expands beyond the Barnes and into the broader community. His storied career has spanned the business, education and political arenas.

He has served as president and CEO of the William Penn Foundation and has led a distinguished career as an educator, in which he served as a teacher and administrator in the public schools of Indiana; deputy superintendent of the School District of Philadelphia; professor of urban studies and urban education; and academic vice president of Temple University.

He is the author of three books, 11 monographs, chapters in 31 books and 33 articles in professional journals. He is the recipient of more than 100 major awards. Watson is also the recipient of 23 honorary degrees.

He is married to Lois Watson and is the father of two children, Barbra and Bernard Jr.

You should all be ashamed of yourselves. Your collective knowledge of art wouldn't fit on your pinky fingers. Disgusting.