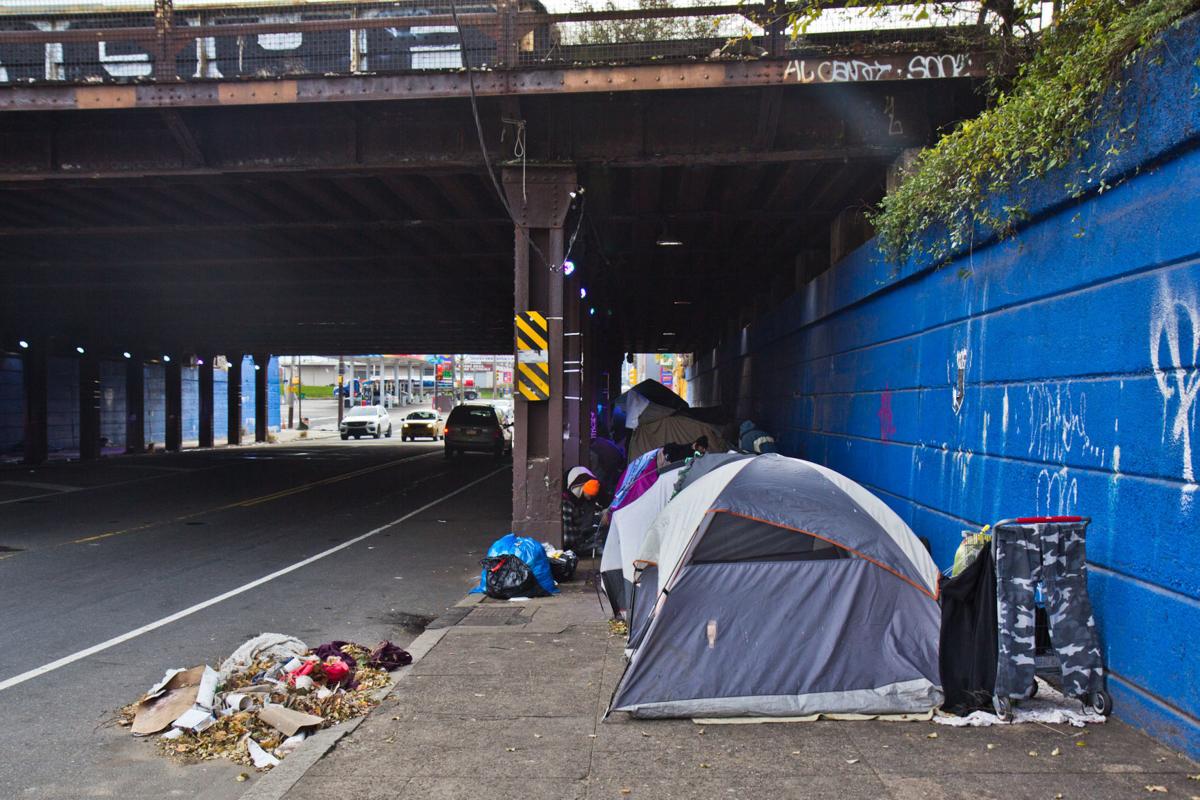 Philadelphia authorities have worked to provide services to those displaced as they clear out encampments in the Kensington section, like the one at Frankford and Lehigh avenues. 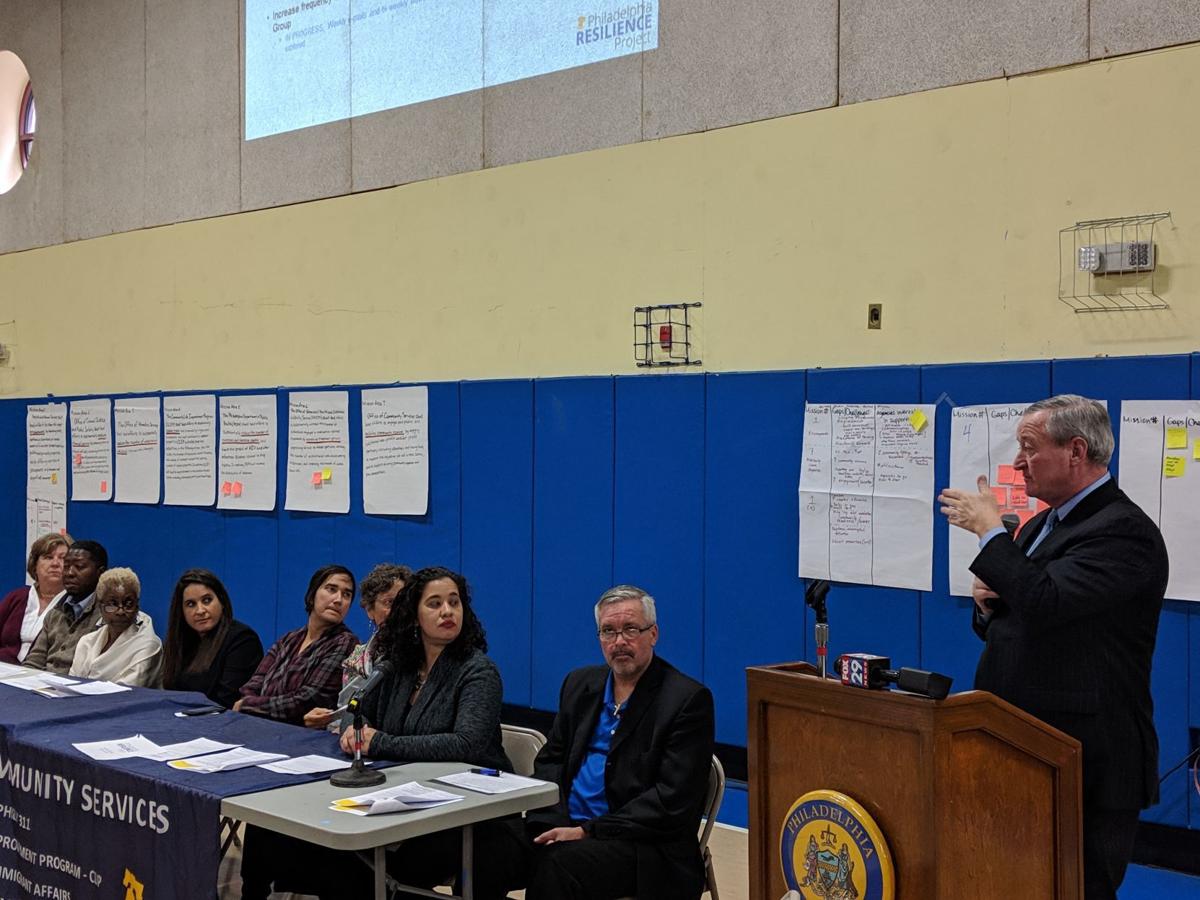 Philadelphia authorities have worked to provide services to those displaced as they clear out encampments in the Kensington section, like the one at Frankford and Lehigh avenues.

While traditionally perceived as an epidemic affecting whites, the opioid crisis ranks among the top issues killing Blacks in Philadelphia — even more than guns.

Woods made her comments Friday during a community meeting in the Kensington section to provide updates about the Philadelphia Resilience Project, the new response to the opioid epidemic in that part of the city after Mayor Jim Kenney’s declaration that the issue is a disaster.

Kenney said progress was being made through the 4-week-old initiative, but “not enough” has been done as city officials respond to issues beyond their control: namely the over-prescription of opioids and availability of illegal drugs.

“The reason it’s not enough is because we’re dealing with issues that we have to react to that we didn’t cause,” Kenney said at the Cardinal Bevilacqua Community Center at Visitation, 2646 Kensington Ave.

Philadelphia’s approach to combating opioids — while still evolving — will not repeat the mistakes of the response to the crack-cocaine epidemic, which resulted in mass incarceration that affected Blacks disproportionately, said Elizabeth Hersh, the city’s director of Homeless Services.

“We’re not going to arrest our way out of this and, I think, we really learned that lesson and we’re trying to approach it in a different way,” Hersh said.

The updates came one day after the Frankford Avenue encampment at its intersection with Lehigh Avenue was cleared, which was among the goals of the initiative.

Approximately 45 people were living in the encampment, Hersh said. Thirty-six of them were accessing services at the city’s navigation center, which is run by Prevention Point on Kensington Avenue, in the heart of the epidemic. The navigation center offers a host of services for those struggling with addiction, including short-term housing.

The city cleared another encampment at Kensington Avenue and Tulip Street earlier this year.

About 189 people were living in the two encampments, Hersh said. Roughly 140 people have availed themselves of the city’s respite sites and navigation center. In addition, an estimated 56 have accessed in-patient treatment, and between 60 and 70 people have obtained identification cards.

Three people have died who were living in the two encampments — two from overdoses and the other was struck by a car. Hersh said outreach workers lost contact with upwards of 45 people.

Among the program’s many upcoming goals will be to close the encampment on Emerald Street, the site of an entrenched drug market.

In addition, officials said the project was on target to meet numerous other goals, which include reducing the homeless population, criminal activities and overdoses along with increasing treatment options. A full version of the report can be found at www.phila.gov/opioids.

Hersh also said the city was seeking to open two new sites: a respite center and a 24-hour navigation center, although their locations have yet be determined. She noted that the goal was to increase the number of available beds to 150.

In the Kensington neighborhood, there are two sites with 80 beds available for those struggling with addiction — 40 at Prevention Point and 40 at the navigation center.

However, Councilwoman Maria Quiñones-Sánchez rejected any prospect of opening new centers in her district, saying that Kensington was “overburdened” with sites.

“Making it convenient is further damaging Kensington,” she said. “These sites have to be equally distributed in the entire city. You cannot, you cannot set up any more sites in Kensington.”

Quiñones-Sánchez called on the mayor to increase public safety and more closely scrutinize the management of the more than 300 recovery houses in her district.

“From a homeless services perspective, it’s underserved,” she said referring to Kensington.

There are currently not have enough beds to meet the current need of homelessness in the city.

The opioid crisis is one of many facing the Black community in Philadelphia, including gun violence, homicides, poverty, food insecurity and HIV-AIDS.

“In the African-American community … you have epidemics on top of other epidemics,” said Mel Wells, president of One Day at a Time, an organization that provides services for those in poverty and recovery.

Last year, 253 homicide victims in the city were Black and 321 of the people who died from opioid overdoses were Black.

Wells said he has seen unprecedented collaboration between city agencies, law enforcement and outside groups to address the opioid crisis.

“There’s all hands on deck right now,” he said. “Everybody is trying to provide more beds, more treatment, more family counseling, but we’re fighting a monster.”

While officials previously believed that the majority of people became addicted to opioids inadvertently through prescription drugs, Hersh said, new data has revealed that many have a long histories of incarceration, homelessness, drug use and mental health issues.

“I think we underestimated the level of adversity that people were up against,” Hersh said.

People who are recovering from drug and alcohol abuse can now turn to a new place for assistance.

While more than 1,200 people lost their lives to overdoses in Philadelphia last year, the opioid overdose-reversal drug naloxone saved even mo…

Sylvia Colon didn’t mince her words when asked why she joined in the massive cleanup of the Kensington neighborhood on Thursday.

Once perceived as a largely white rural problem, more African-Americans in Philadelphia are dying as a result of opioid-related overdoes than …

Drug overdoses, suicides cause drop in 2017 US life expectancy; CDC director calls it a 'wakeup call'

Life expectancy in the United States declined from 2016 to 2017, yet the 10 leading causes of death remained the same, according to three gove…