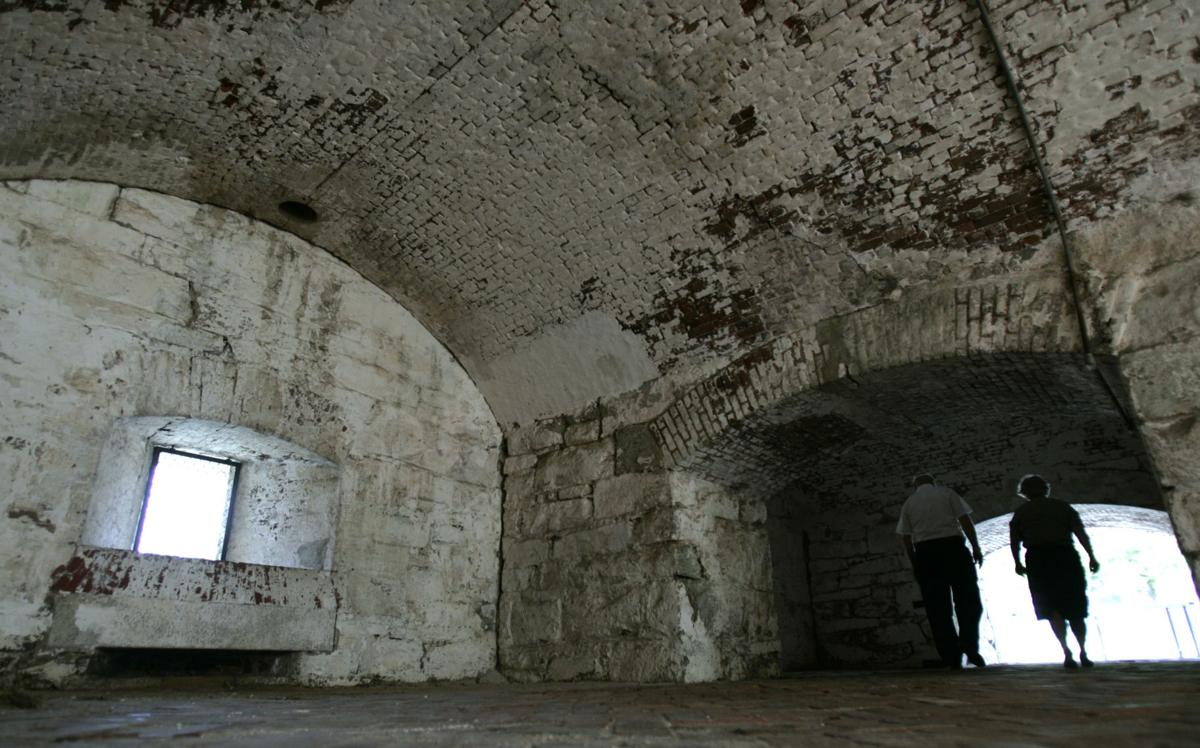 A couple walks through the casemate at Ft. Monroe in Hampton, Va. The first documented Africans in Virginia arrived in 1619 when a Dutch warship landed at Fort Comfort, now named Fort Monroe. — AP Photo/Steve Helber 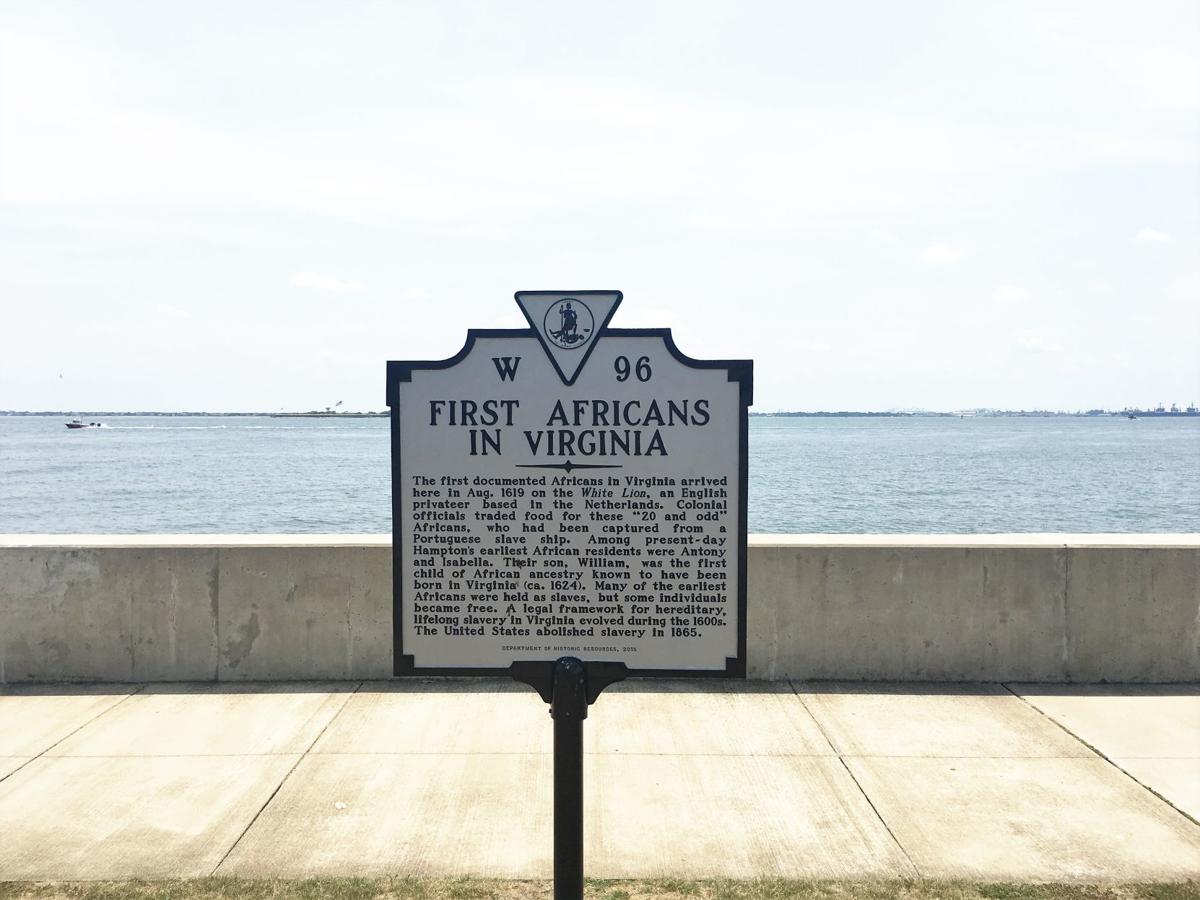 This historical marker denotes where the first enslaved Africans arrived at Port Comfort, what is today called Fort Monroe, Virginia in 1619. 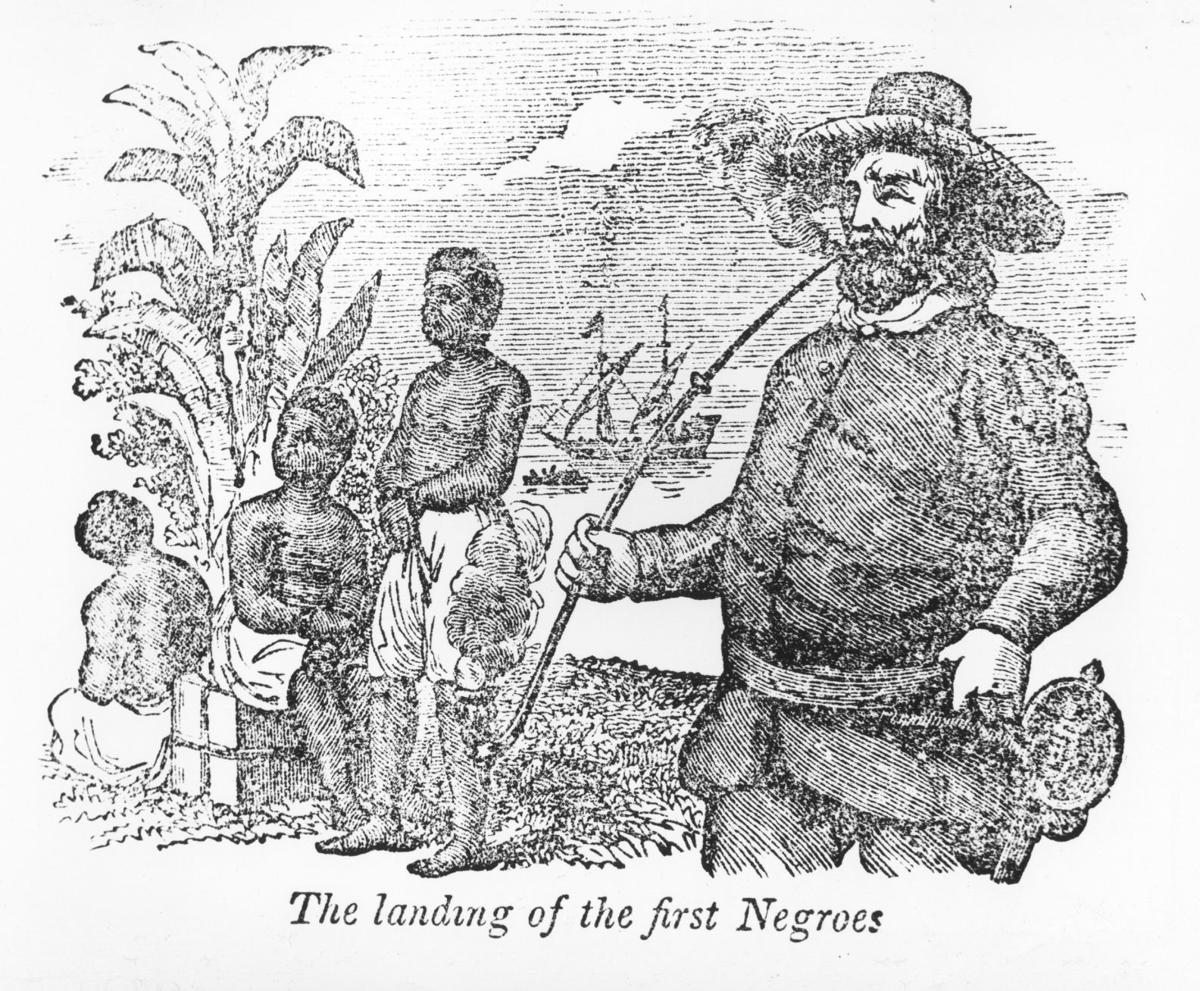 An engraving depicts three African slaves newly arrived on the shores of Virginia. The first Africans disembarked at Point Comfort, on the James River, late in August 1619. This illustration was reproduced in S. G. Goodrich’s Pictorial History of the United States, a textbook published in Philadelphia in 1860. — Courtesy of the Library of Virginia 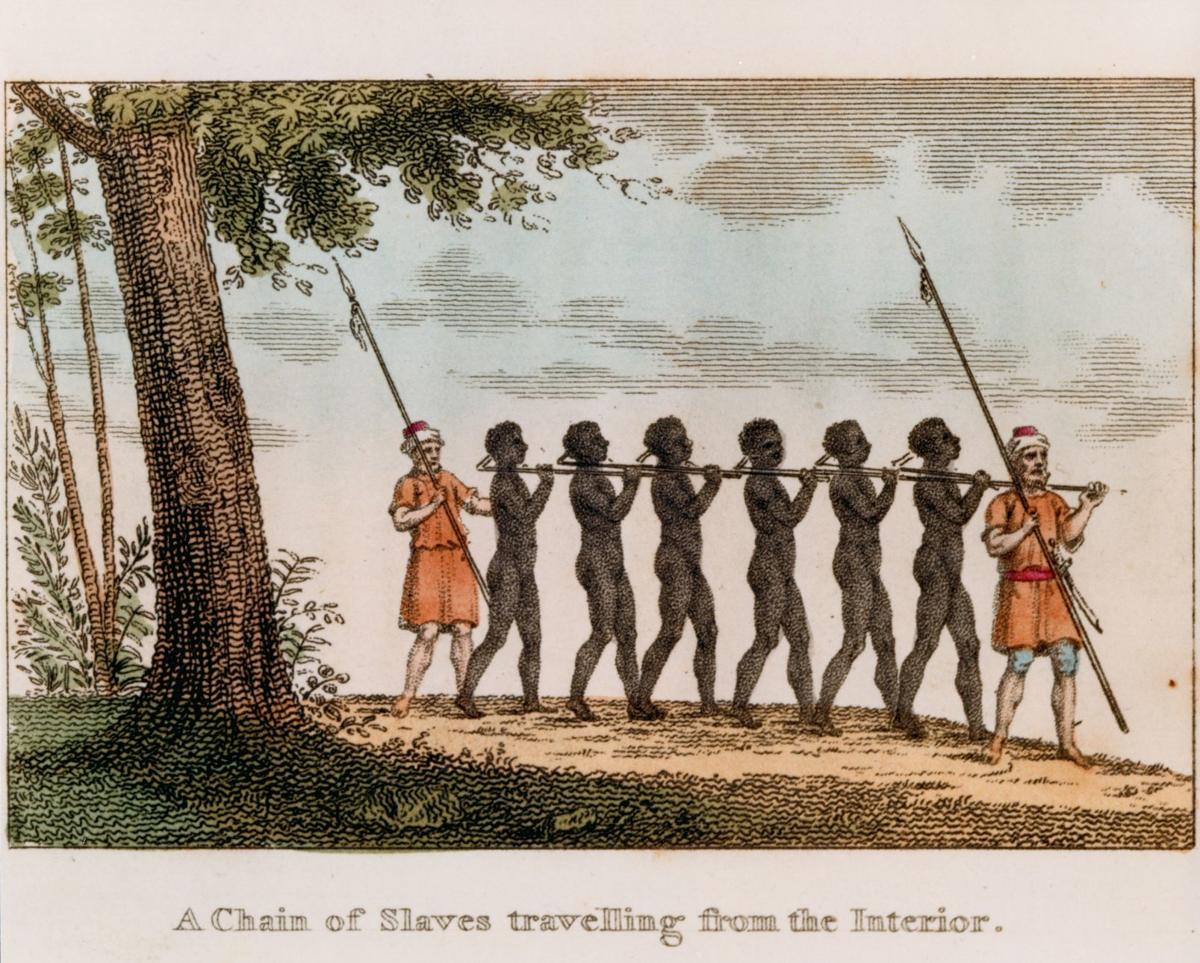 An undated drawing of “a chain of slaves” traveling. Historians estimate more than 12 million Africans were sold into slavery between 1619 and 1866. — Courtesy of the Library of Virginia 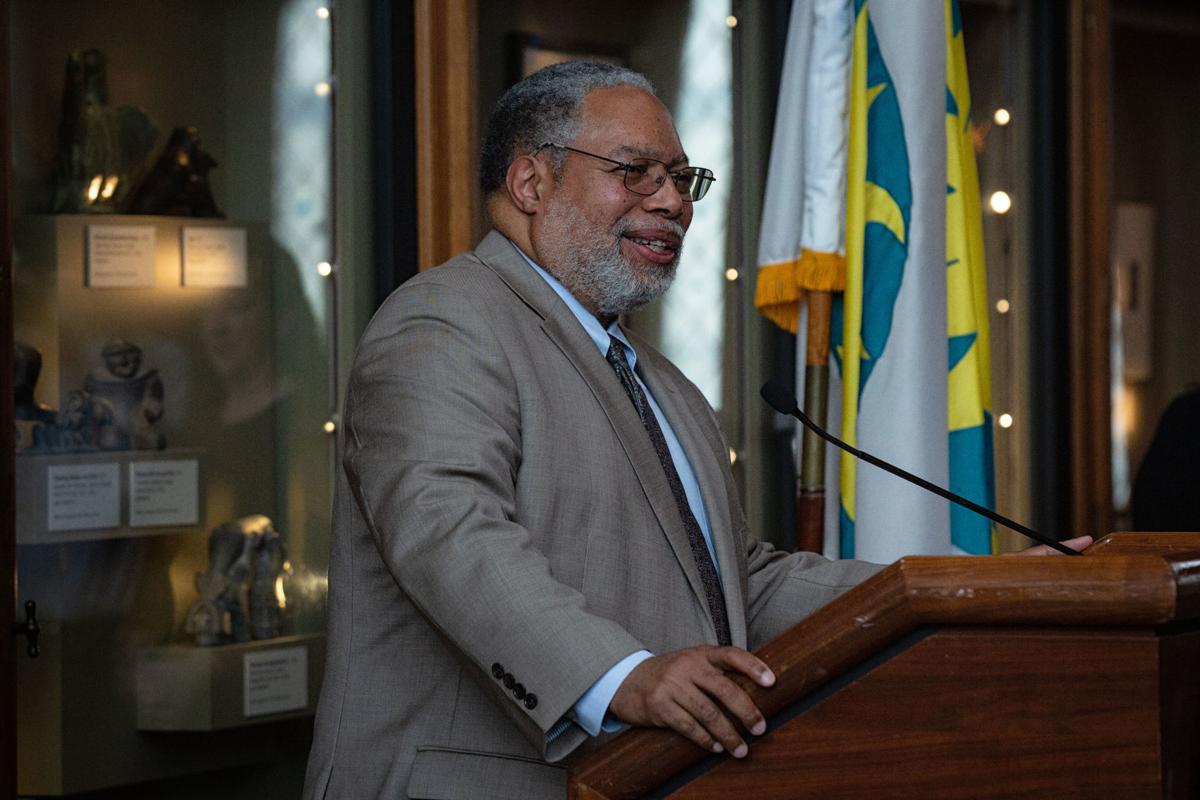 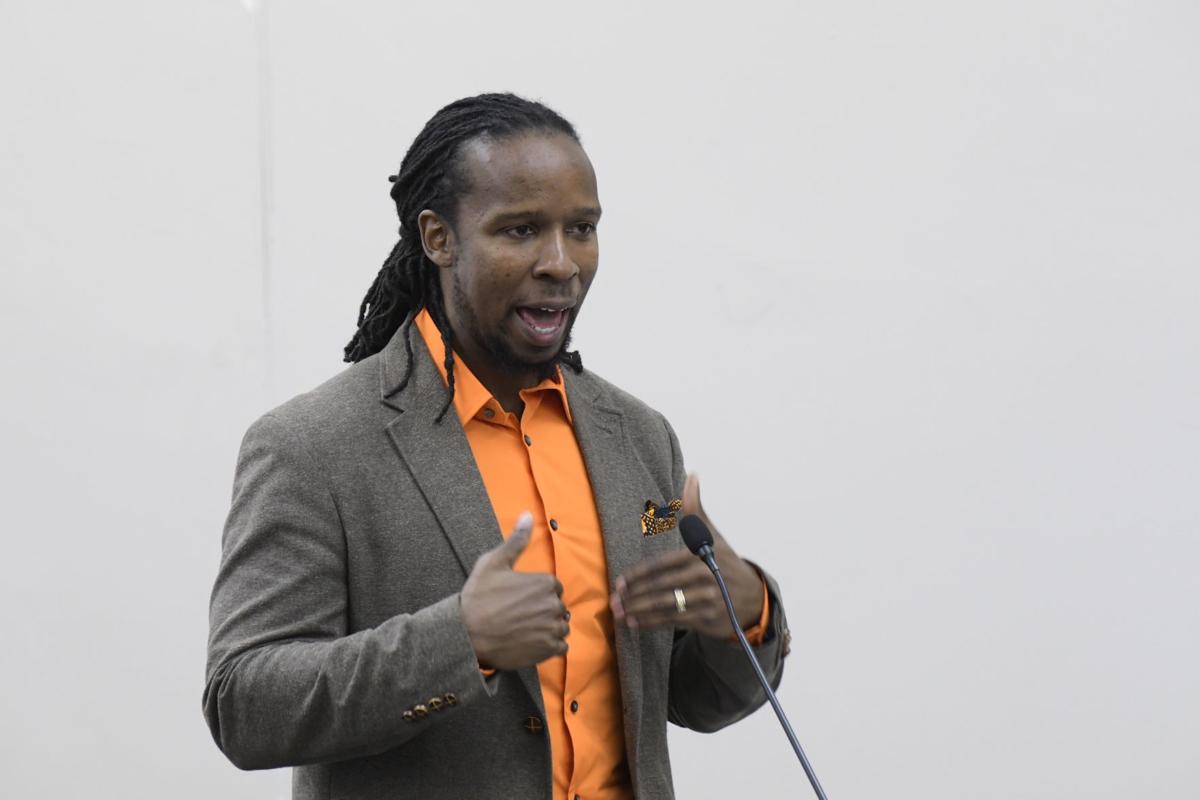 Professor and author Ibram X. Kendi says “now is the time to honor our ancestors and their strength in a country that rejected them.” 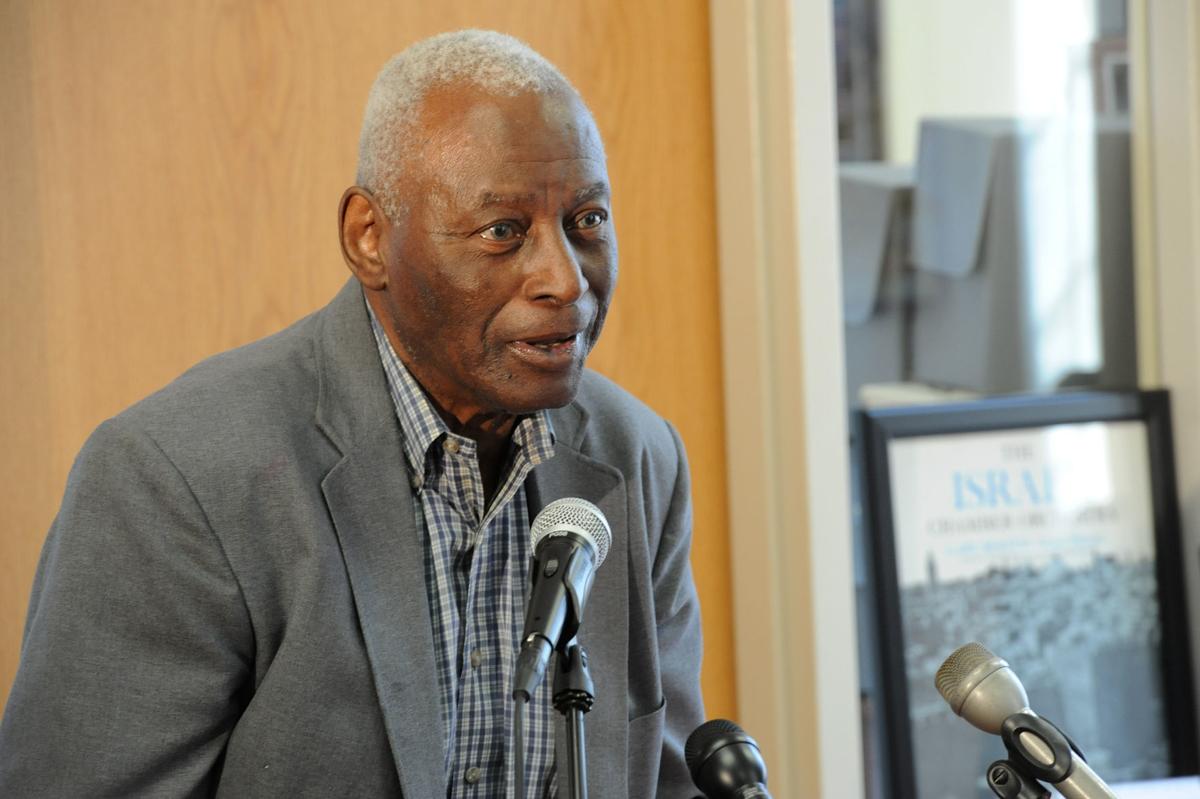 A couple walks through the casemate at Ft. Monroe in Hampton, Va. The first documented Africans in Virginia arrived in 1619 when a Dutch warship landed at Fort Comfort, now named Fort Monroe. — AP Photo/Steve Helber

This historical marker denotes where the first enslaved Africans arrived at Port Comfort, what is today called Fort Monroe, Virginia in 1619.

An engraving depicts three African slaves newly arrived on the shores of Virginia. The first Africans disembarked at Point Comfort, on the James River, late in August 1619. This illustration was reproduced in S. G. Goodrich’s Pictorial History of the United States, a textbook published in Philadelphia in 1860. — Courtesy of the Library of Virginia

An undated drawing of “a chain of slaves” traveling. Historians estimate more than 12 million Africans were sold into slavery between 1619 and 1866. — Courtesy of the Library of Virginia

Professor and author Ibram X. Kendi says “now is the time to honor our ancestors and their strength in a country that rejected them.”

Four hundred years ago on Aug. 20, 1619, the English warship White Lion docked at Port Comfort (now Fort Monroe), Virginia. It carried “20 and odd” Angolans who had been prisoners on a Spanish ship that was captured by the White Lion’s crew.

That day is universally recognized by historians as the beginning of the trans-Atlantic slave trade, in which millions of Africans were enslaved and sold to do labor in America and elsewhere.

The slave trade is the first modern American business model, and must be recognized for its impact on the world, said Lonnie Bunch III, the first African-American Secretary of the Smithsonian Institution and founding director of the National Museum of African American History and Culture.

“The slave trade helped many parts of Europe become Spain, Portugal and the Netherlands, so in a way it helped create modern Europe, and it obviously helped begin a long, slow decline that really continues to affect both Africa and the United States,” Bunch said.

This year is “a time to commemorate and to remember that there are people on whose shoulders we are standing, whose labor and whose belief in a country that ultimately didn’t believe in them ultimately made America live up to its stated ideals,” Bunch said.

But, for many, commemoration is not the same as celebration.

“We have a statue of a phony prize-fighter at the steps of the art museum. So what? Where is the statue of the Black architect who was responsible for designing the Art Museum? But this is the way it has been for African Americans during those 400 years. Slaves. Indentured servants. Jim Crow. Segregation. And now look at the racist, Donald Trump, that we have in the White House on the heels of the first Black president in more than 200 years. What is there to celebrate? We are history. But we would be foolish to celebrate the racism of this country.”

Ironically, it was Trump who in 2017, signed the 400 Years of African-American History Commission Act, establishing a 15-member commission to coordinate the 400th “anniversary” of the arrival of those enslaved Africans in the English colonies. Bunch is a member of the commission, which has had events across the country to mark the occasion, including symposiums, films, exhibits, festivals, lectures and poetry readings.

Efforts marking the commemoration also have been initiated in Africa. Ghana last year launched a year-long marketing and reunification initiative aimed at boosting tourism and further strengthening ties with people of African ancestry in the United States, South America and the Caribbean. House Speaker Nancy Pelosi recently went to Ghana for some of its events.

Debate about the date

Some historians note Africans had a presence in the Americas before 1619, and those are the dates that should be recognized.

The first African to arrive in America, Juan Garrido, came here as a free man, according to an article on The Root by Harvard historian Henry Louis Gates Jr. Born in West Africa, Garrido moved to Spain where he met Juan Ponce de Leon. They sailed together to Cuba and Puerto Rico, and in 1513, while sailing with de Leon in search of the Fountain of Youth, he arrived in what would later be called Florida. He continued on to Mexico and later died in what is now Mexico City.

Estevanico, a Moroccan slave owned by Spanish explorer Andres Dorantes de Carranza, was part of an expedition to colonize Florida and the Gulf Coast in 1527. Estevancio, Dorantes and two other Spanish explorers were captured and enslaved by Native Americans who lived on the Louisiana Gulf Islands. After they escaped in 1534, they headed west and helped chart parts of what is now known as Arizona. When others fell ill, Estevancio continued alone into what is now New Mexico. Some historians believe Estevancio was killed by Native Americans in New Mexico; others believe the Native Americans helped him fake his death and he continued to live in the West.

It is believed that some Africans accompanied English explorer Sir Francis Drake on his North American expeditions in the 1570s and 1580s.

But the key differences between the Africans who came to America in the 1500s and the “20 and odd” who arrived in 1619 is some of the “20 and odd” were sold into slavery or indentured servitude and stayed in America.

“In essence, from the beginning of what became America, there were Africans involved in shaping a nation,” Bunch said.

“This gives us an opportunity to say this is not an ancillary story. This is an opportunity to think as Americans how issues of race and culture have really shaped this country and continue to be a part of what we celebrate, but also a part of the ongoing struggle to help America live up to its ideals.”

The African population remained fairly small in the years that followed. A muster from 1620 showed 32 Africans living in Virginia and a muster from 1625 counted 23, according to The Jamestown Rediscovery Foundation. Hundreds and thousands more would follow.

The Southern enslaved population exploded after Eli Whitney’s invention of the cotton gin. Data from Weber State University show the number of enslaved people in the South was 654,121 in 1790, had increased by almost 68% to more than 1.1 million by 1810, and reached 3.9 million by 1860.

Historians estimate that as many as 12 million enslaved Africans were dragged across the Atlantic Ocean and exchanged for goods via the triangular route between Europe, Africa and the New World (North and South America and the Caribbean). America’s involvement in the brutal system lasted until 1866.

According to James H. Sweet, professor of history at the University of Wisconsin-Madison, slave resistance began in British North America “almost as soon as the first enslaved Africans arrived in the early 17th century. This took the form of slowed work production and even theft by the enslaved.”

At least nine insurrections occurred between 1691 and 1865, the most famous being Nat Turner’s 1831 rebellion in Southampton, Virginia that left 60 whites dead and resulted in the deaths of 100 enslaved by combat or retribution.

So divisive was the issue of slavery that it led to the bloodiest war in American history, the Civil War. Slavery’s aftermath produced a potholed history that gave rise to domestic terror groups such as the Ku Klux Klan, which lynched thousands of African Americans; resulted in the denial of constitutional rights such as voting; created separate and unequal schools; and led to the denial of basic human rights such as African Americans being unable to drink from the same water fountains as whites.

Even today vestiges of slavery hang over the nation, from the debate over whether the descendants of slaves should receive reparations, to the stubborn racial wealth gap between Blacks and whites, to the over-representation of African Americans ensnared in the criminal justice system.

“We have many unhealed wounds as a people,” Blockson said.

“I think about everything we had to sort of overcome as a people to get to this point,” said Ibram X. Kendi, director of the Antiracist and Policy Center at American University and author of the National Book Award-winning “Stamped from the Beginning: The Definitive History of Racist Ideas in America.”

“So I stand in appreciation of our ancestors to be able to survive and thrive so that we could all be here at this historic moment.”

Kendi said now is a time to honor our ancestors for the “strength they exhibited” to survive slavery and all of the residual pain associated with being “in a country that has rejected Black people whenever possible for centuries.”

“If you were to ask me the word that describes African Americans in this country, one of the main words would be resilient,” Kendi said. “I think you just don’t survive upwards of 250 years of enslavement, another 100 years of a second trauma of enslavement through Jim Crow, and another 50 years of mass incarceration and hyper segregation and police violence without being extraordinarily resilient.”

Throughout four centuries of slavery and beyond, the Black church has taken on countless forms: a secret meeting place, an intense spiritual g…

A native of the Germantown neighborhood, Mark Keenheel stepped into the Lest We Forget Museum of Slavery recently for the first time.

NORFOLK, Va. — Four hundred years after American slavery and democratic self-rule were born almost simultaneously in what became the state of …

Thank you for this excellent article.